Sunday 3/18 a buddy and I took his canoe into a CT lake. We went directly to the same area we were hitting crappie and largemouths at last year in early April, which is a shallow cove where a brook feeds in that has plenty of marshy structure.

Topwater retrieves with the Original Floaters is what had the…

Tonight it's going to be in the low 20's and tomorrow will be in the low 50's. Alot of rain wind and just darn cold this whole week. It's guna put a hurting on me for fishing. Will try to catch some fish. Any1 got some pointer's for cold front weather? Can't use my fly rod

Jen, Greg McWilliams and Lord of the Fly Rods are having problems posting content.  I'll offer a $20 gift certificate to cabelas to the person who can help me figure out what's going on!

Today was a good day ! This morning started a little slow but when the breeze picked up the bite was on caugth 25 or 30 not sure but i know exactly how many 10" or better i used my knife on 18 . Todays lunker was 14 - 3/4 " long . I love Shell Crackin !! I did catch a few big gills but i only had 4 that was 9 inches . Crackers got to be 10 and the gills got to be 9 you gotta leave seed or your fishing hole will go dry . Its only gonna get better now !!

Something exciting is about to happen!

An important member of the bigbluegill.com family is about to get a little "media love". :-)

Actually TWO members are getting something cool in print.  I'll give you a hint about who they are.

One of them is named Jim Gronaw.

Any one from nebraska on here that knows of a good place to fish for some big gills. I'm in the lincoln area. Thanks

Hello - Great website!  I love learning other anglers perspectives.  This is my first post to the site.  I fish panfish quite extensively here in Ontario.   I thought I would share a few youtube videos of panfishing in Ontario and if the group likes them, I'll share others.  If you want to talk Ontario bluegill or crappies, feel free to drop me a line.

Chumming for Bluegills in March....

The weather has been spring like for the past two weeks in northern Illinois(Waukegan) and I was wondering if the water temp. is in the mid 40's would chumming bring the gills into 7-10 feet of water? I hoping so cause I'm going out this weekend to try my luck at my honeyhole. 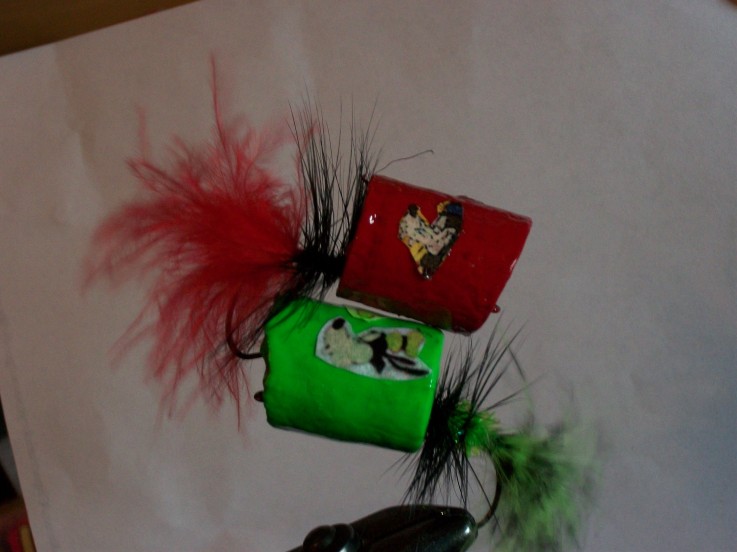 Recently hit my usual late winter early spring pond. Have been hitting it for about 2 weeks now, but on Wednesday I saw bluegills stacked up thick in shallow areas. With all the sun and warmth we've been having, those shallow water temps must have warmed up.

The lure they were paying most attention to was a 2" soft plastic trout worm that already comes rigged with 2 hooks.

Every time I'd cast that worm out there with no weight, bluegills would come shooting out…

I recieved my first infraction from the california fish and game today. It was for fishing with an unattended rod. I have had a valid license as well as a 2 pole stamp forever.The warden said he had been watching me and he saw me walk away from my 2nd rod. I plan on fighting it because i was fully capable of getting to it if i had a hit. Has anyone ever heard of such nonsence in Ca?

I have been told by 2 different people that there is a old school technique of fishing for crappie. The way it was explained to me is to cut below the lip of a crappie, pull on some type of membrane underneath and a forked tongue shaped piece of something will come off . You use this to jig with and it drives them wild. Has anyone ever heard of this?

I am catching a variety of panfish at this time. Can someone help me identify them. There seems to be quite a difference in their color and shape. 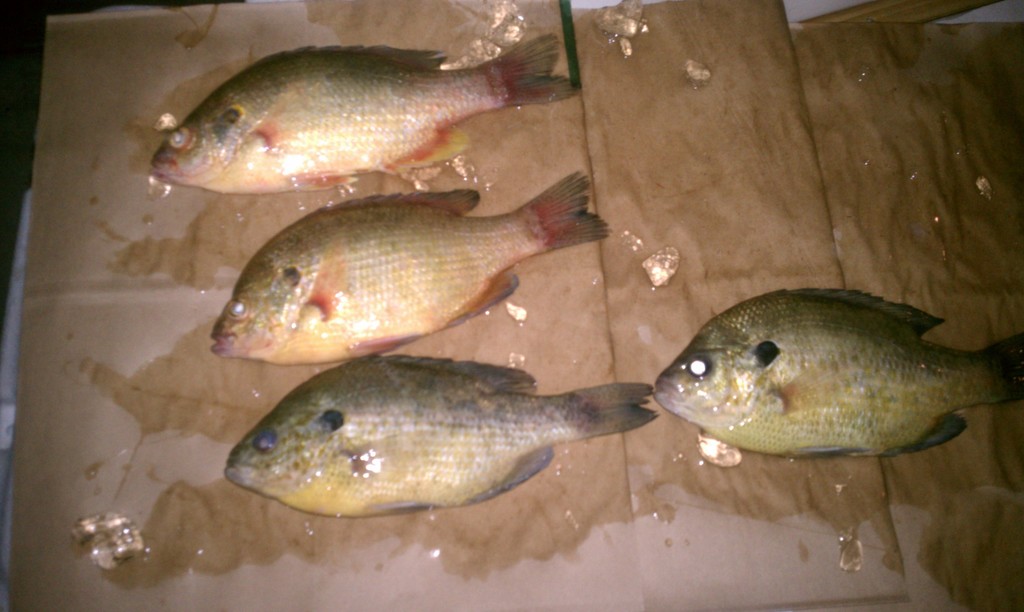 Wonderful day of fishing in the wind.

Went out today. Wind hit around 9 mph. Did 32 bluegill and 4 crappie all on microjigs. 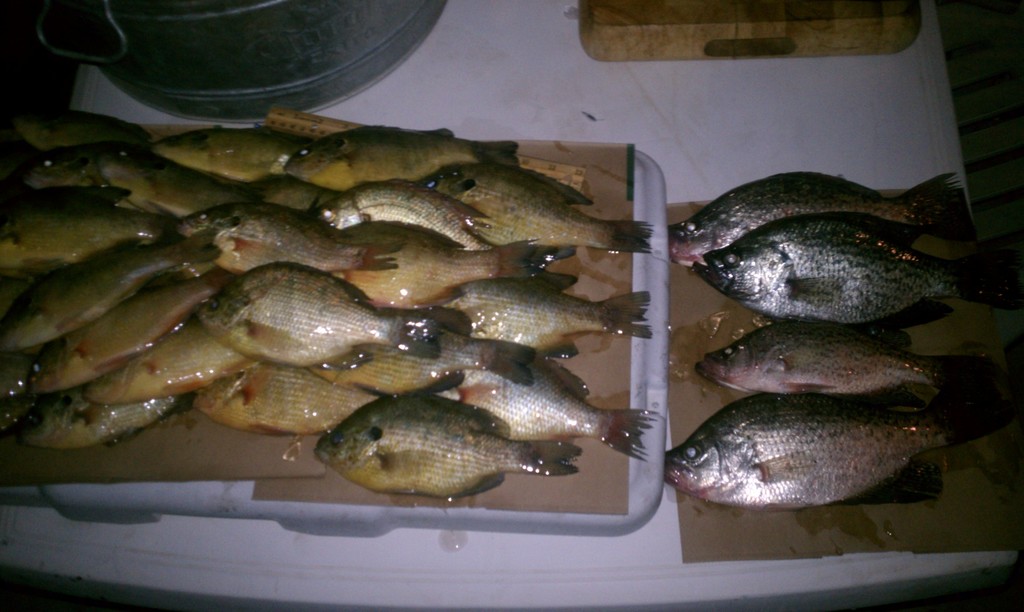 Sorry folks, but with the family gathering and busy schedule, I finally manage to processed the bait glue batches based on requested temperature formulation. Can't believe how many bottles I'm sending out. Thanks the wait. Looks like I have to order more materials soon. If you want some, chime in, I know how much to get, so I don't keep you guys waiting too long. Here's what the 2oz container look like:

Im planning on going out tommorrow and driving 70 miles to fish in 11mph winds. Did it a few weeks ago and with a float 4 ft of leader and a red and white 1/80 jig I slaughtered some nice 8-10 inch bluegill and about 9 crappie. Wind did all the work for me. I live to tip my jigs with a little piece of meal worm. anyone have any good tips on panfishing windy conditions?

2 weekends ago a buddy and I hit an estuary cove along the Housatonic River in CT. Threw nightcrawlers out there with no weight or bobbers and kept on hitting plenty of white perch.

We were into the whites for about 10 to 15 minutes before they'd make a trip around the cove and back 5 to 10 minutes later.

Sizes ranged from small 4" to keeper 9".

For the past month now, I've been hitting yellow perch pretty well.

With the mild winter we had in CT, I was fishing open water at local ponds in February and kept hitting yellow perch from 6" to chubby 8" all with 7cm Rapala Original Floaters. My main colors were Firetiger and any pearl silver, white, or grey instead of your usual silver black.

Now that trout season has ended in CT,…

My wife bought me a electric fillet knife for valentines day. I dont know how I ever lived without one.

Jen Nayfly replied to Leo Nguyen's discussion Be careful of a hot rolling scam
"So how do you remove your personal info from the net?"
21 hours ago