I had the chance to go to Pohick Bay, on the Potomac, several times this week. I stuck to fishing a curly-tail grub jig under a bobber and tipped with red worm, under and around a fishing pier.

Monday was pretty great! I got a good handful of what I'd call medium-large bluegill (as long as my hand, about 8"), and one decent crappie. I wasn't really prepared to save them, so I let them all go. Tuesday and Wednesday were snowy and freezing windy, respectively. But Thursday I got into…

I could sure use some Bluegill advise..

I have been fishing an abandoned company pond since last year, primarily I have been catching Bass, but I caught several monster Bluegill last year, one tipping the scale at just over 2 pounds..I caught those few on a Rapala minnow..I would love to get advise on a more reliable lure/bait. I'm fishing an 8 acre pond, with a center depth of about 45 feet. The water is fairly clear to very lightly stained, if that matters..Any help would be appreciated.

I am looking to create a panfish instruction video. While I can do some of this video on fishing urban waters and "regular ponds" for kids and new anglers - people dig the long ball (baseball home runs).

I mean to say, they have to see big fish for you to be a subject expert right. I mean, this site isn't called…

Catch it when you can!

With the weather warm for a few days but a cold front settling in (again), I decided to get out on the leading edge of the front and see about some fish. Slow bite (The front got to the fish before I did) but the quality of fish was MUCH better than it has been. Glad I got my 'fix' cause it looks like no more fishing til at least Saturday. I wish we could go ahead and slip into a full time Spring pattern.

I'm also noticing that at this private pond I've been fishing, the lily… I was at 4MR today off the Potomac River, and got nothing (except a few nibbles)! Temps were decent 50s-ish, but the wind was brutal!
But I am sure Spring will be busting out all over any day now.

Also, I lost my nice spider lure to a snag a couple days ago. Next: can I make one from a wine cork and rubber bands??

My go-to spot these days is Four Mile Run in Northern Virginia. On the days we've had warm weather, I've been there to see what I can do. The last couple times I saw a lot of fish breaking the surface, so I tried a Hula Popper last time. I saw lots of fish take a swipe at it, but none of them hooked up.

Then I saw this little foam spider at the store- very lightweight, and fairly realistic. I finally got over there again to try it, and boom. I rigged it up in a float-and-fly type…

9" Hen on a Crankbait

Title pretty much says it all... went fishing after school at my neighbors pond and was shocked to catch this giant (for this pond) bluegill while bass fishing. Lure is a rebel 2.5" floater, I have tried all sorts of small (and normal sized) crankbaits but in cold water, it is the only one bass will eat, I also catch lots of crappies with it...apparently bluegill like it too! … 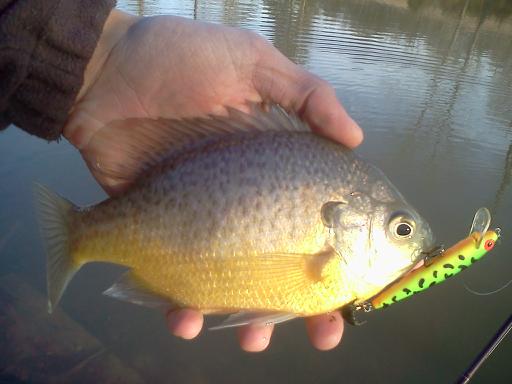 Just received my Outdoor Oklahoma magazine and want to send out a hearty CONGRATULATIONS to GREG MCWILLIAMS for being featured in an article on catching Sunfish using a flyrod and flies! WTG Greg! 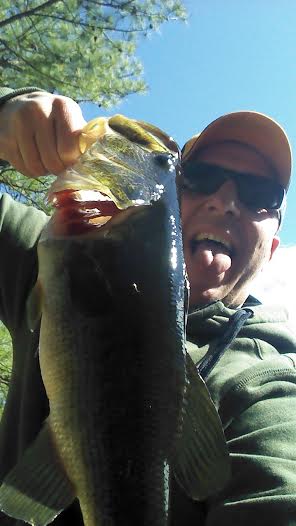 So my son and I have decided on our new house...the one that I will retire from the Army in. And of course, I need to find the best Chinese takeout, pizza delivery, grocery store, and fishing spot within a few minutes of the new house. I keep going back to this particular pond that has given me a few nice 'gills and one baby bass so far.…