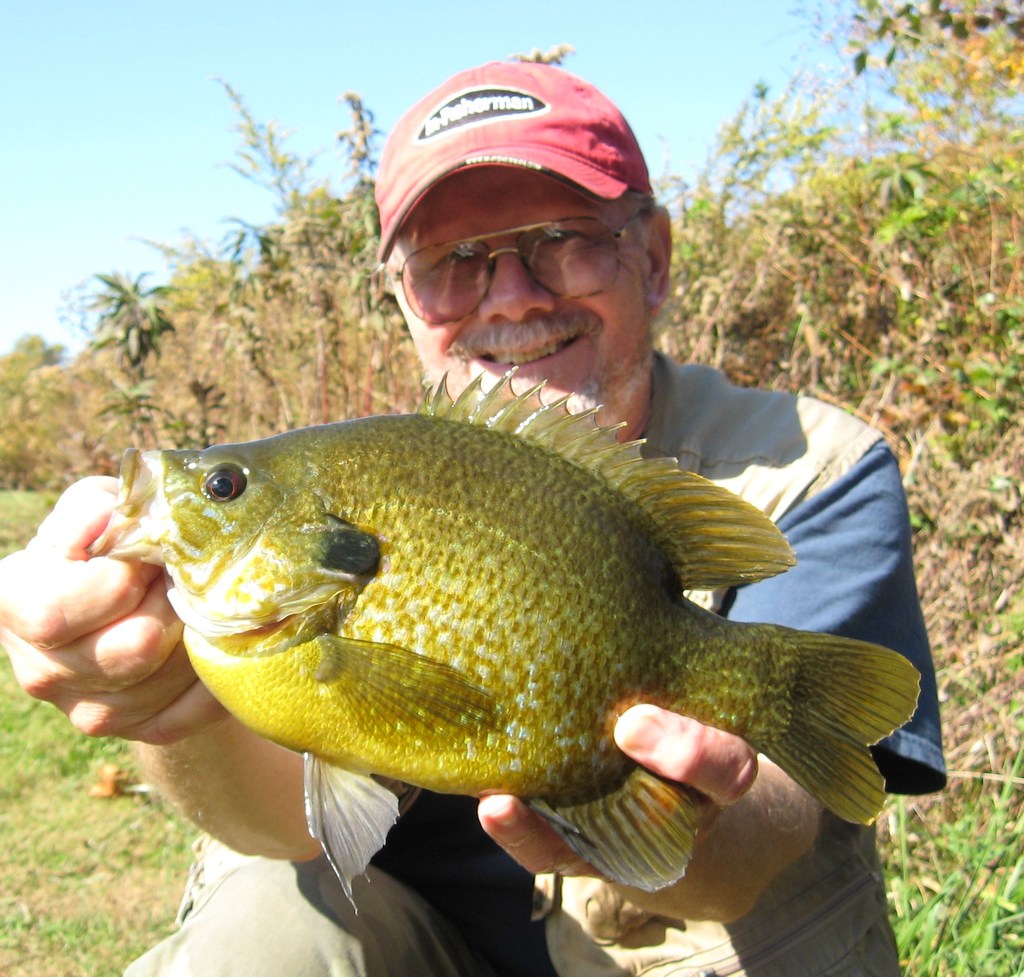 Well...what can I say...today was actually a really slow day, except for all the very small and stunted largemouth bass that were hitting anything and everything I threw at them. I saw Tonys' major-league Hybrids last night, looked at them again this morning, and said that's it...I'm going fishin'. Maybe I'll get lucky!!

So, after 90 minutes and no hybrids on the bank, I decided to use the drop-shot technique that produced so well a few weeks back. I had exactly 1 night crawler, and the bass were ripping me off. Finally I got a decent hyb by using a 'lift/drop' retrieve. This one went 10.5 inches... 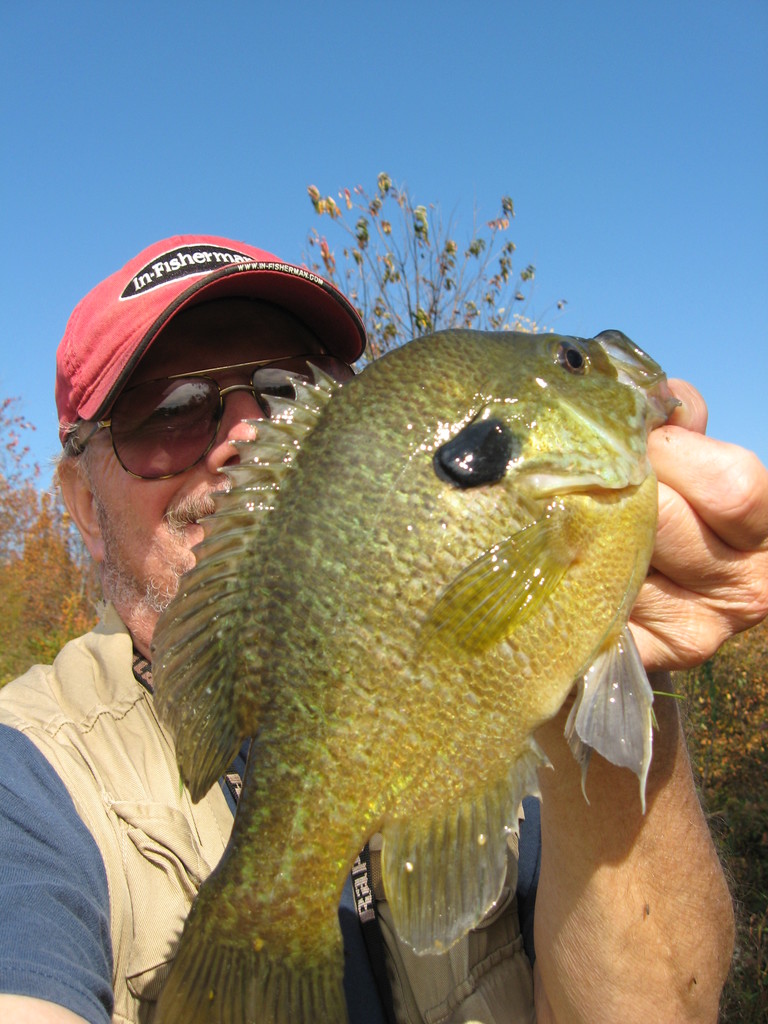 Normally, this would be FOTD for any given trip to this 2 acre pond. Action was so slow on sunfish that I was ready to call it quits when my last worm was stolen by a dink bass. But, I scrounged around under an old log and got a nice, sqirmy garden worm for my #8 Aberdeen hook. Threaded it on, and on my second cast got a thunderous strike and line started peeling toward the middle of the pond! I had just tightened up my drag, so I thought that the 2-pound test might be in peril...I started to 'back-reel', patiently playing this powerful fish. I would say that it took about three minutes to position myself and steer this fish away from the pier and shallow brush. Finally, I got a glimpse of this fish...WOW! It was then that I started saying little prayers to myself and wondering about hooksets and stuff! I wanted to get my hands on this fish sooo bad! But I had to be patient. Finally, for what seemed like way too much time to land her, I slid the hybrid gently on the bank and put the squeeze on! 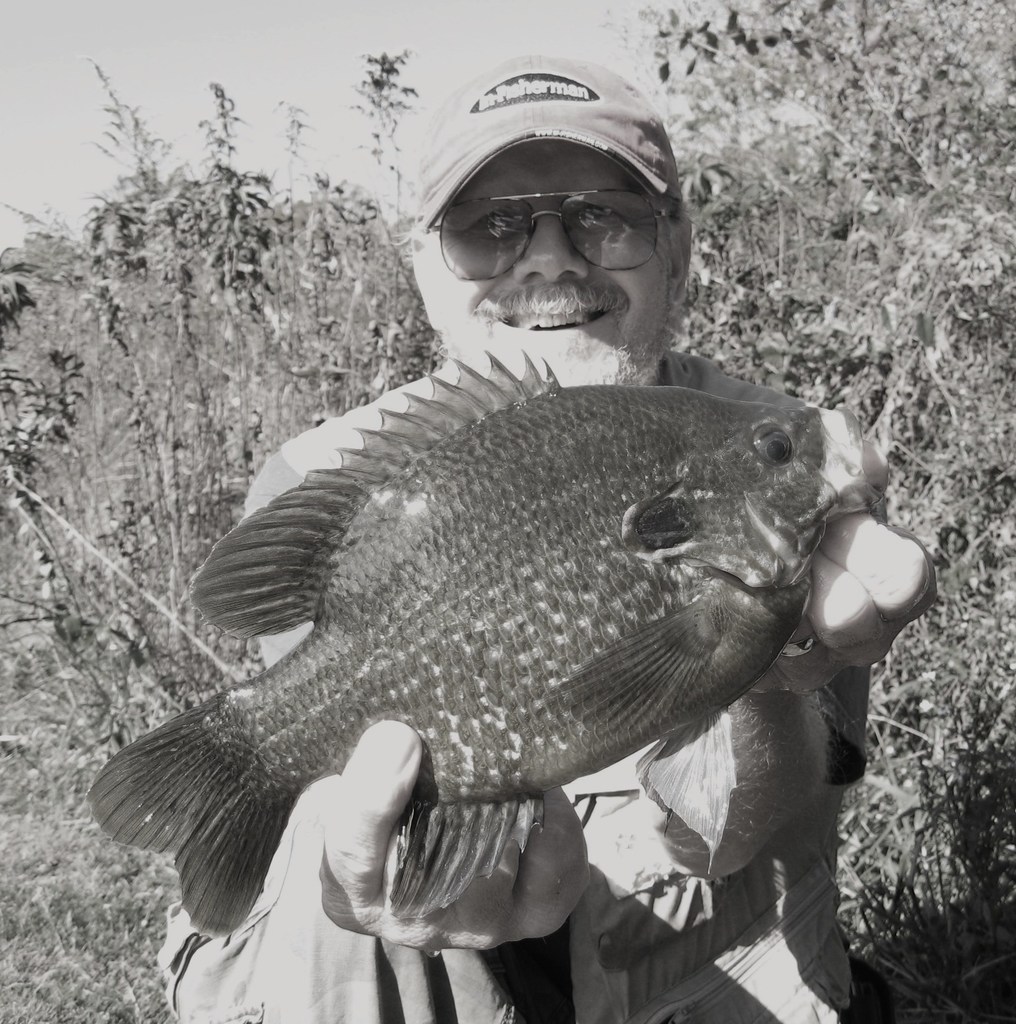 To tell you the truth I was shaking like a leaf! This fish measured 12 inches, but I did not get a weight. I had forgot my tripod, so I nervously set up the camera with the self-timer on my Trail Blazers' back fender and took some pics that way. I quickly grabbed a bucket and filled it halfway with water and kept the fish in and out of it the several minutes that it took to get a few decent shots. Giggling and giddy, I fumbled through the picture taking process, then walked the couple yards back to the waters edge and watched her swim away.

This was the best 'walk-off' fish I have ever caught! It's why we do it here at BigBluegill.com!

Thanks everyone! I hope to fish this pond 'post-Sandy' sometime next week with the owners son, who will be home on leave.

Tony...give me some 'cold hybrid' tips! I've never fished them this late in the season.

AWESOME, JIM!!!!! CONGRATULATIONS, definately one to WRITE HOME ABOUT!!!!!!

Congratulations Jim! That is so awesome!!!

Glorious catch! So great to have photograph to compare the catches.

What a fish!!!  As you said this is what bbg.com is all about. Two pound test too! It's so cool that the least planned out trip, with rather slow fishing is when you get your biggest hybrid ever.

Great account of your exciting catch ! Thanks Jim ! You're an inspiration!