Thanks to all who joined -

Bass frogs and dragonfly flies I tied for a friend. 11 Replies

going to get me shot 5 Replies

Want To Tie Flies? Where do I start? 10 Replies

You need to be a member of Fly Tying for ? to add comments!

Im pretty sure I read that the "Gurgler's" origintor, Jack Gartside, first tied them for spring stripers. Here's his take on them:

Couple weeks ago I had an idea.  Tie up some BIG foam topwaters for Stripers.  Classic white body / red head.  I wanted to do a variation on a Gurgle-Pop and some kind of foam diver.

I ended up using Eagle Claw plain-shank hooks, size 1/0.  One the Gurgle-Pop variation, I used two pieces of foam, one red, and a big strip of white.  The red piece had a tag on it, so I could tie that to the hook, then angle the big part.  To help support the red piece, I tied the white foam so that it would butt up against the red.

On the Diver version, it was tied basically exactly like the Gurgle-Pop, except I angled the red piece up and back, instead of up and forward.

Both versions had tails of white neck hackle, splayed out, and Krystal Flash and Flashabou for some sparkle.

The cupped face on the Gurgle-Pop is a little big.  It pops, gurgles, and chugs nicely, but catches the wind while casting, and really twists up my tippet.  I'll have to either trim the cupped face a bit, or incorporate a small swivel into my leader.

The Diver worked exactly as expected!  It would dive on the strip, then float back to the top.

Unfortunately, neither caught any fish.  It's still a on the hot side.  In a month or two, once things start to cool off, hopefully the Stripers will regain their appetite.

Dick, I think Marabou and rubber legs just behind to base of the popper would work fine also

I made a few up after I can back from vacation but unable to wrap the feather so didn't put one on. They look a little bit naked but I guess they'll still catch some fish with just the marabou and rubber legs.

Thanks Rick for you help. Tried that before but there ain't getting these big paws in to do any stroking been there done that this is one of fly tying things that I've tried and tried but unable to master and have lots of feathers to use but not very good at doing it. You know you watch people do it and they make it look so easy maybe I'm not using the right feathers or my initial evaluation paws way to large to fit in such a small confined area.. 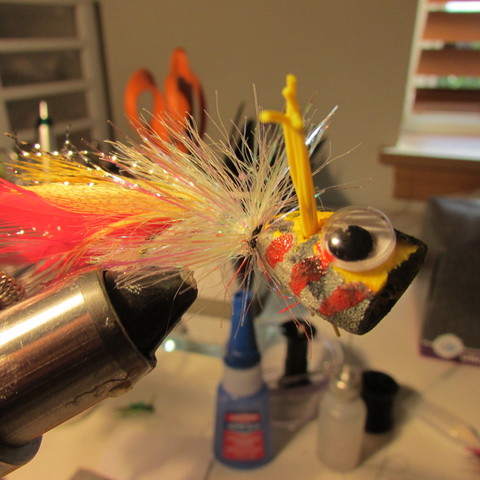 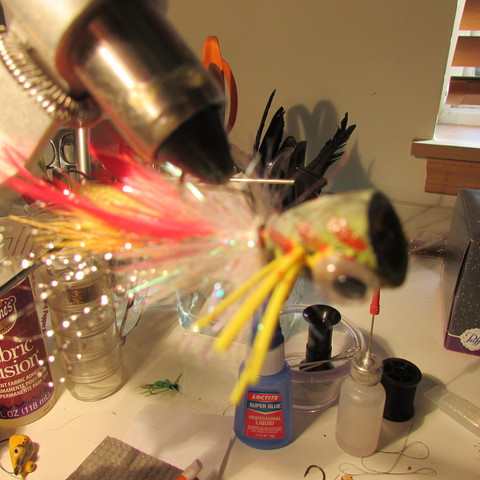 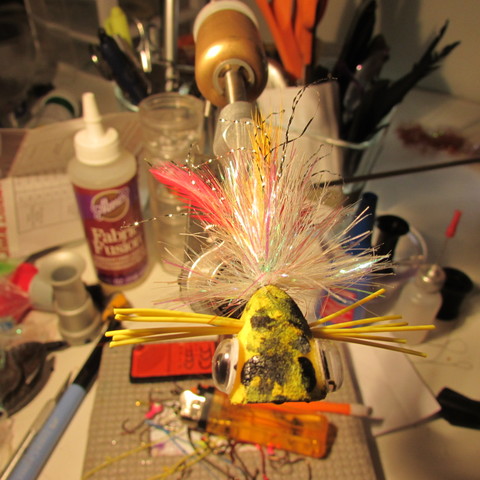 Dick, if you have hackle pliers just hook it on the small end of a large feather tie the base down and every turn of the feather, stroke the feather back the best you can. I know you can do it because I've seen the other flies you have tied. stuff you tied. Also when you tie the feather down have the curved part facing the back of the fly.

Nice, Rick. It's a blast to watch smallmouths blast away at those poppers.