On fishing with children

“…supply them with a light bamboo rod, and attach at a joint one third from the top end a very fine silk or linen line. Wind it a few times round the rod, and cast two half hitches over the top end.

Then affix a float according to the depth of the water, so that the bait will sink within six inches of the bottom. About a foot above the hook fasten to the line from one to three split shot.

Let the hook be the minnow size, and make the bait a…

The Shiner - As Table Fare?

This tiny white fish, with scales of metallic luster, is from two to four inches long, and the best bait-fish in the fresh waters of America. It is found in most of the brooks, rivers, and lakes of the temperate zone.
A greedy biter, it requires only a bit of angle-worm covering the point of a minnow-hook and it may be taken as fast as it can be drawn out with a supple willow wand. While fishing in rivers for black bass, I have moored one end of my…

All this damsel nymph tying of late - THANKS, Jedi Dick - led me to experiment.

Combining the usual materials with whatever was on hand, I came up with a raggedy looking damsel nymph simulation. Considering how shabby it turned out, I'm officially calling it the Wannabe Damsel. 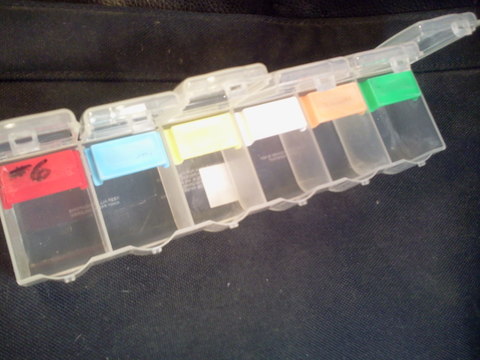 Thrift store pill box, $1
I sanded off the lettering on the day markers so I can label each segment as I wish.

Add split shot, hooks, small lures and you have a mini tackle box.

FLY ROD LESSON ONE: Know When To Say When

I made a blog post earlier today about Life, Lessons and the Perspective of Big. I also got another more practical lesson on the fly rod while I was at it.

The selected spot for todays Angling Adventure was one of my favorites, an intimate place I know very well. Most of the time I have it to myself and today was no different. However, I was pretty a sure a fly rod would be a tough thing to manage there. As it turns out I was right.

I've never been real good at…

I watched 4 guys pile into a small jon boat yesterday and head out. The wind was blowing fiercely and it was cold... it had me ducking for a lee shore. These intrepid blokes didnt have 6" of gunwale showing, yet they were undeterred. Part of me was worried for them, the other half applauded their tenacity.

I hope things turned out well for them....

The Secret to Flutter Spooning Pickerel.

This is a shallow water method, first told to me by our own beloved John Sheehan, of RINGWOOD, NJ. You may not know that John is a fine musician; you can hear him on ITUNES or see him on YouTube all day long. I encourage you to do so. But John is also an accomplished angler and he uses this plan for both bass and pickerel. Let John tell you how it works:

“Flutter spoons thin gauged spoons that come into play when a slow fall is the preferred presentation  . This means they don't cast…

Well Ive finally done it- Ive scouted out a handful of fishing spots and have amassed enough  panfish tackle that even a packrat like me can feel comfortable. I catch myself wringing my hands and cackling over the pile my goodies like some overgrown leprechaun. So the game is on.

I look around at all my junk... er, treasures... and it dawns on me that I need to dump a lot of this stuff. It started last year when we moved to this house and I had to actually TAKE all my crap…

Im a 'returnee' you might say. For years all I ever did was fish. But in the past 15 years or so, that has fallen away in favor of other things. Oh, I kept a few items of tackle, just enough should I decide to wet a line once in a while. But for the most part, I just quit going.

Recently, I moved to my dads house and 'inherited' all his fishing gear.** This has inspired me to get back into fishing.

** For the record my dad is fine... he just moved to a senior living…

"Here are the catchers Mikey:"
22 hours ago