At 56k acres, Lake Murray, SC is where I call home. I live 8 miles from "Carolina's Fresh Water Coast" and it's 650+ miles of shore line. As you might guess, I go there as often as I can manage. It is one helluva resource to have at your back door. But even though I THINK of it as familiar territory, from time to time I am reminded that even its furthest backwaters are daunting, super-sized and mysterious.... 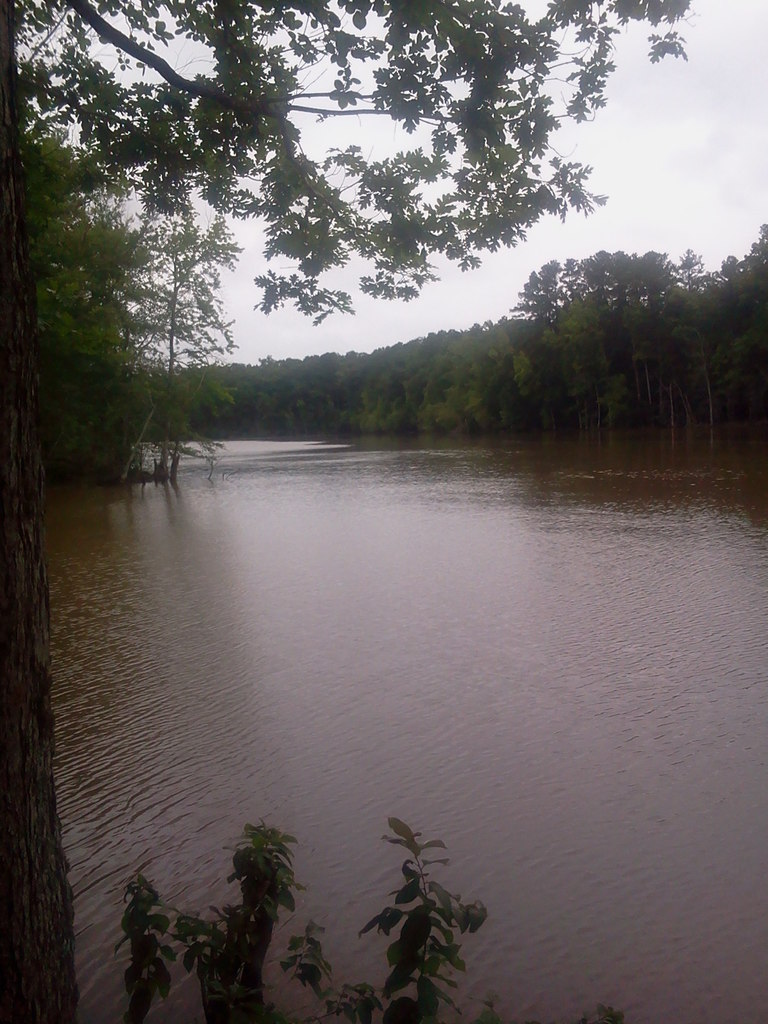 Back bay off Lake Murray, SC.

Standing in the rain with my faithful dog, Katie, I was casting my little Beetle Spin from the bank and generally loving the angling life. Then I spotted something swimming in the murky water. Like most of the East, we've had nothing but rain for weeks and the water is like chocolate milk.... visibility is one inch or less. No kidding.

I rear back to cast and IT broke the surface. To be honest, I don't know what I saw. It was 30 yards out and both rain and the muddy water made it impossible to tell. It was big enough to make me question my sanity, though. Visions of me floating tranquilly in a float tube vanished in a flash.

The creature had fins; I could tell that much. At four feet, give or take, it was prowling along minding its own affairs. My guess, if I'm to make one, is for a large catfish. 75+ pounders are routinely taken from the main lake.... ten miles away. However, weeks of swollen creeks dumping into the lake could very well have brought one of the beasts into this back water.

It may have also been a *medium* sized long-nosed gar, which is worse in my opinion. I caught one last year from my kayak that had me pretty shook up. Again, I was flinging a Beetle Spin into some shallow structure - you can see the same shore at mid-center distance of the picture above.

I cast and started my retrieve when thought I'd hung on a snag... until my "snag" swam off with me in tow. When I had reeled myself up to it - not the other way round - I saw what I had to contend with. What I had hooked was a log with razor sharp scales, hundreds of needle like teeth and a seriously bad attitude. Lets just say I was relieved when it spit my battered spinner back into my lap and sauntered off.

No kidding; it actually sauntered. I felt like nothing more than a bothersome pimple on its @ss at that point. I was in a ten foot kayak and it was half as long as the boat.

If you've seen one of these leviathan gar, you'll know that having one at float tube level cannot be a good thing.

If you've NEVER seen one, think barracuda  - a BIG prehistoric, pissed off barracuda with a much longer mouth.

I recently sold a ten foot kayak so I could try float tubing. Right now, I'm checking Craigslist for a bigger kayak...

Hope you got out and thanks for reading. Tight lines and Fair winds!

x2 all you said. I've heard of the fish cake method with many
so-called trash fish. Carp and gar always seem to be among them.

I'm sticking with a kayak or canoe instead of a float tube.

You would be a real trend setter Leo by eating garfish.

chopping and hacking = cleaning a gar

"Gar" and "elegance" are words that don't go together well.

Here's how to clean a Gar:

You guys are peaking my interests even more to chase after these toothy thing, and eat them..with bacons. I saw some of the smaller 2' to 4' gar getting prepped. My gosh, it's like a log of meat ready for the smokers, BBQ pits, and the stew pots.

Surely I tell you, I won't be tubing next to the large mama or papa, or even near the school of these apex predator.

Those gar are a blast try and catch. Years ago on the Mississippi River we use to cast floating Rapalas for gar suspended near the surface. Our catch rate was maybe 1 in 10 with the other nine jumping and throwing the Rapalas back at us.  By the way those toothy critters are good to eat. The meat is snow white, and contrary to what many believe, they are not real bony.

Here's a video I shot last year.  This is the turbine outlet of Keystone Dam.  Almost all of the little "dimples" you see in the background are actually 4' or bigger Gar surfacing and gulping air.  Many of the fishing guides that I know call this spot "the Gar Hole".  I don't know how many Gar I've fought and/or caught here.

I've heard a little folk legend about the "Caddo Lake Monster", a rumored 15' long Gator Gar.  I have no idea if it actually exists or not.

I guess I had the weight about right, but the wrong State, as far as the World Record:

that prehistoric fish does get very large for sure.