for anyone in the pursuit of bull gills on kayaks/canoes

Would like some info on kayaks. I told myself never happen because your setting so low. Now I see they have done wonders with the seats so my interest is back somewhat. I would love to check into them as far as comfort which ones I should be looking at and maybe a propulsion system foot or small electric. Again Just looking for now with a couple back surgeries I want to look long and hard. Strictly for fishing.

what kind of yak are you prowling around in? 58 Replies

You need to be a member of gillyakers to add comments!

Wait..wait..David, you're going to be a seaman/harbor regulator?! That's awesome!

Yes, like you've indicated David, there's everything to my madness. My wife's kayak only has the needed lights, but my kayak goes a bit beyond that, since I do more activities on the water than her. I'll break it down:

Two sets of port and starboard nav lights: Ensure the 120° to 180° angle per side is completely covered. We are on a slower, lower, moving vessel. Not only we need to be seen, but we need to be seen well. 1 mile visibility is more than sufficient. But that 1 mile is critical to ensure every other vessel knows I am in range, and I will blind you with my glare if I have to so you can avoid me. The dual green LED lights also assist me in attracting the fishes as well, mimicking the feeding light spectrum. Redlight, assist a bit, but not enough.

360° stern light: Critical. I wanted the 48in, but purchased the 36in by mistake. If they have a collapsible 56in, that would be ideal for kayakers.

2 of the sidemarker stern lights: Why? Anchoring lights. If I'm not moving, it's odd to confuse the hell out of the other boaters. However, the upper and lower white stern lights indicated I'm towing something. It can be my secondary kayak, the extension of my rods, my crayfish/crab/lobster pods, water anchors, etc. that may extend further beyond my kayak while it's in creep or full motion. So, having side marker stern lights active at all time covers my water operations for both coastal and inland. Coastal vessels will recognize this more readily. Boater in the freshwater don't care, but it offers visibility practically 360°. Your chance of being ram on the sides is much much greater than from behind and front. I'm just covering my butt.

Dual amber LEDs behind and in front of the cockpit: utilized as assisting light to prep my gears, minimize bugs from getting on top of me, and amber lights casts shadows in a great distant than white that they human eyes can detect. So, the other big vessels may see something small on the water, and the amber will cast my shadow of the person sitting in the cockpit. Slowing down for the kayaker will be up to the other vessel's pilot common sense, since yakers can be flipped by large wakes.

the anchor light will probably be mounted off the crate... tall enough to see over my head. maybe incorporate the go pro in a mount also.

id like to be all setup for some b.crappie night fishing... i heard the big ones come out at night on this lake

If you're gonna do it - go with what the standard configuration:

- A red/green bow light (visible for 120 degrees around from the bow center line)
- A 360 degree stern light.

(lights on your head don't cut it - turn your head and now what happens to the range of visibility off the bow? It is the vessel you pilot that you are identifying, not you.)

As Allen suggests, the pole mounted 360 degree white light, by itself, is probably adequate to alert others to your presence. That and a signalling lamp (flashlight) should suffice.
( I would personally leave off Leo's extra white light on the side. It is non-standard and could serve to confuse other boaters. But, knowing Leo, I'm sure he has good reason for putting it there.)

But unless you know for certain that Michigan differs from the USCG standard, and never intend to operate anywhere else, its best to err on the side of being thorough, as Leo says. Besides it's just as easy to be USCG compliant. The night light scheme is basic, and is the same for all vessels. There are only a few variations based on size, and you aren't getting to that with a kayak.

With the advent  of low-power LED strip lights, it is now easy to mount unobtrusive navigation lights. There is little reason not to do it right, if you're dead set on doing this.

I'm currently studying for my states USCG operators certification, so let me add this:

DO NOT assume that because you have added lights you are safe. Most boaters don't know the requirements for safe boating, let alone what the nocturnal operating lights mean. Carry a signalling lamp, in addition to the navigation lights.

hey thanks guys for your response!... a couple years ago at a fourth of july fireworks on the lake ceremony... the local sherriff was kicking everyone off the lake without the navigational lights. i actually saw kayakers with leds on head gear that i thought was pretty cool. i really like what Leo has going there. iended up finding a few sources on ebay

Good points to consider!  I wasn't aware that CA mandates kayaks be off the water after sundown.  Man, that's messed up!

Comment by Leo Nguyen on June 26, 2016 at 5:57pm
Allen, you are right for coastal regions, under USCG. However, each county and state dictate their codes on top of that for freshwaters as well. We can't be on the water after sundown in fresh water for CA, but in states like AZ and NV where we are playing at, when boats, powered or unpowered, minimum is a bright lamp (flashlight or regular 360 camp light being mounted high as temporary basis to get to shore), and need nav lights for safety reasons when the boat is on the water for a fixed amount of time without shoring. I rather fully upgrade to a full deck when I decide to hit the coastal areas. Small investment for the long term.

Slip, if your kayak is less than 16 feet long (which I believe it is), the Coast Guard only requires that you have a flashlight on board at night.

I have a small piece of PVC zip-tied to my crate.  I've got a battery-powered 360 white stern light that I bought at Wally World years ago.  It slips right into the PVC.

There is a BIG debate amongst kayakers as to whether or not you should have sidelights (the red/green lights).  While, yes, it does help other boaters tell if you are underway, and your basic direction, many kayakers argue that it leads to dangerous situations with motorboats, as they assume you are moving at a high speed, when in fact, you aren't.  These same folks say you are safer by just displaying the white stern light.  Other motorboats will assume you are riding at anchor, and treat your vessel as a stationary obstacle (which you kind of are).

Personally, I don't like to be out at night.  That may have to change, from what I understand.  The best fishing is at night, sunrise, and sunset.

Notice the one on the left has the prior mod of shorter side marker nav light LEDs near the top, with two amber in the middle cockpit, and two whiter side marker stern lights. Added two more full strip LEDs and a higher stern light to truly make both kayak visible. 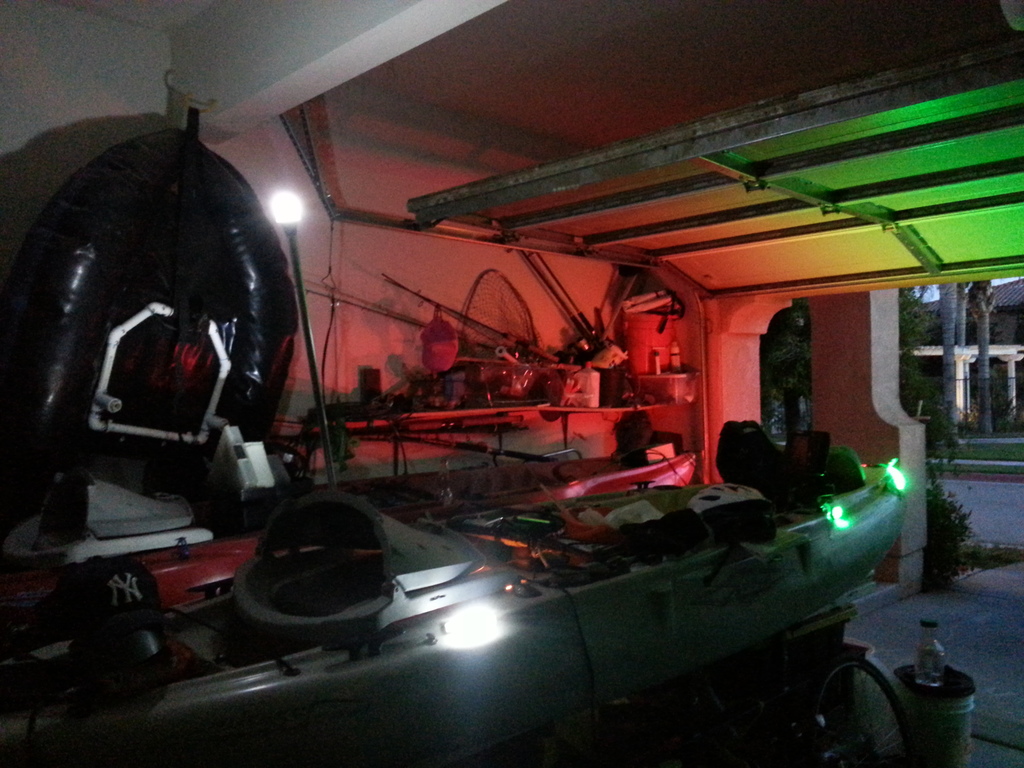 LOL No fun. You want to blind the hell out of them. Here's mine. 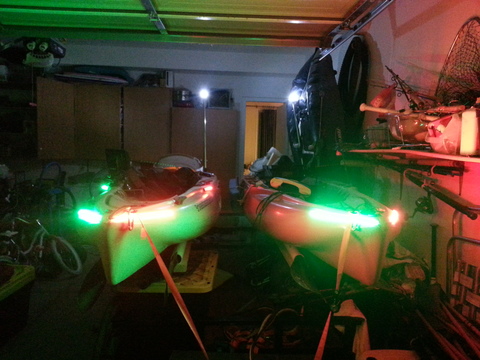 Comment by Tim Cotton on June 26, 2016 at 4:27pm
If I'm fishing where I might see another boat, I hang a $2 led glow sticks from one of my poles. That and a headlamp will do just fine.