The New Yakkanoe Gets Fish

I got the Mad River 14 to the lake today. Its big water and the large bluegill eluded me. Lots of small ones would hit anything that landed near them, topwater or subsurface. There was active feeding, everywhere, but the only bigger ones I could drum up were over cut banks and fallen trees. Even they ere small and I got those on spinners.

The topwater fly that got all the attention was a black/yellow Chernobyl Ant on #8-10 hooks. Truth is, they were smacking anything on topwater - the fish had a lot of gusto. But they were just too small to do anything but knock these floaters around!

The subsurface fly to use was a Briminator, although it wasnt much of a performer. 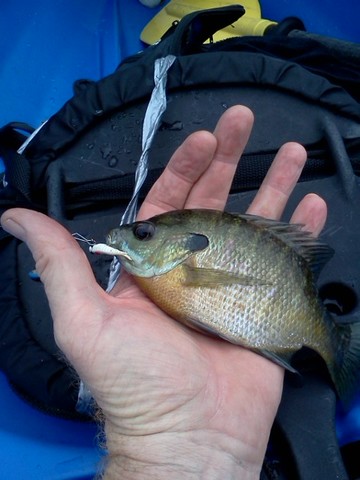 So, I didnt beat any records. But, its always good to get outdoors for the fishing thing. Not being in a canoe for years, however, I learned and re-learned many things. Here's a brief summary (well, brief for ME):

The Adv-14 is BIG - coming from a small kayak, this is immediately felt. Lots of places to put things. However, you cant reach your things if they are at the end furthest from you. No wandering around this thing to dig into gear bags. Its hull design makes it stable for a canoe, but don't push it. Plan gear placement wisely.

Roomy - Not at all like a kayak which I find cramped. The elbow room is nice, even if you aren't dancing a jig here.

Tough to enter and exit - Okay, I'm fatter and older than I used to be. In other words, agility isn't what it once was. I'll loosen up as I use it, and I've started a little "canoe exercise routine" to help.

Hard on unused muscles - This goes hand in hand with the agility thing. This canoe is a hybrid, with a poly, rotomolded hull. This means its heavy - 73 lbs. Getting it on and off the truck is easy enough, but the whole thing is a lug for one person.

It does paddle easy enough and moves well underway. Not really lithe, it does scoot once you get her moving and it isnt sailed like a leaf in the wind.

Wheeled dolly - this is going to be an absolute necessity to get to the water. I backed to a boat ramp today, and I was the only one there. But on busy fishing days, that aint gonna fly. And at the rough-and- rustic places I like to visit, those without ramps and other niceties.... well I aint lugging this thing down the slope. Gotta get it on wheels.

Nice to reach way out to different spots - I paddled several miles, just getting the feel of the Adv-14 and casting flies. At one point I went across the bay to the far shore, on a whim. The JOY OF MOBILITY! Pick a spot and go. Get there and fish the shallow or deep sides of cover with ease.

Anchoring system - gonna want one in time. Im not feeling pinched for it, yet - but I will.

Bring worms - I love fly fishing, and casting spinners and spoons, but worms are my back up. I always tote a telepole, floats and the basic rigging for those times when a worm is the thing.

Today, I left the ding-dang things at home. Wont do that again.

Thumbs UP to canoe paddles - they were developed over thousands of years for a reason. Kayak paddles are out. Im sure some enterprising Injun tried a double ended paddle in the dim past ... ending up throwing it on the fire. One of the wettest rides youll ever have is using a kayak paddle to propel a canoe. Water runs right down the thing on every stroke, into your arm pits and swamps the interior. Kayak paddles - 0 Canoe Paddle - 1

Hip waders are the ticket - I'm a wimp when it comes to wet feet. I hate it. With canoes, your feet will get wet sooner or later. Just getting in and out will do it, if you don't have a means to prevent it. Scampering over logs and rocks to avoid the water is sometimes possible, but cannot be relied on, Some shorelines just dont afford that.

Hip waters will let you just step in and out, without trying to balance on dodge around in an effort to keep your feet dry - much easier for a fat, old guy. Plus hip waders just look very COOL. A man in hp waders MEANS BUSINESS. Second choice will be knee high rubber boots.

Permalink Reply by Keith Ritter on September 19, 2014 at 6:04pm
I've been thinking about a dolly for hauling deer out of the field, I like to use an old wheel chair. They have big wheels and are reasonably light. I could see using part of the chair frame and wheels ratchet strapped to one end of the canoe. They also fold up for storage.

its not hard to make a wagon of sorts;; a wheeled garbage can;   axils on it is great to use!

Permalink Reply by Keith Ritter on September 19, 2014 at 6:12pm
I like the looks of Lake Murray lots of islands and deep bays. How far a trip Scruff?

How far for me? About 10 minutes to the nearest point, a bit longer to others.

Its nice if you have a boat, since most of the lake is deep and clear. Its not a shallow, weedy thing.

This means the fish use the depth itself for cover and shelter and you have to go find them.

I dont plan to make a dolly this time. Sometimes I will pay for a design built item, and this is one of those times.

$33 and Im good to go. Its free standing for loading, it folds up for stowing aboard and I could hardly make one for that,

Great report and info stats Scruffy. Can't wait for the next day out, when you snag a small gator/large snap turtle that provides an hour of fun.

Permalink Reply by Brian Jones on September 20, 2014 at 3:55pm
Its not tape in the traditional sense. Its A roll of 1/2" wide1/8" thick putty. Its used to seal windows and can be used to seal deck fittings on boats. Its stickey and very plyable. I didnt get to work on it today. Got other chores to do. I did find that if I heat the butyl it will thin out well. I did find a nice panel of composite material to make my console from.

Hooray on the console material!

In seeing what others are doing along these lines, and after reading manufacturers instructions, I still have to register my doubts on the putty. I hope I'm just being a worry wart.

Permalink Reply by Brian Jones on September 20, 2014 at 8:24pm
Im not forsure either. Its a matter of the sound waves getting thru it and the risk of an air bubble too. It cant hurt to test ideas. I do hate losin the temp reading when using it as a shoot thru set up.

It definitely cant hurt to try it. I apologize if I sounded like a stick in the mud.

The temp reading does seem a loss. What Ive done is gotten a small, digital aquarium thermometer to get an idea of surface temp. I just hang the probe in the water, and the thing comes with a suction cup. I just lick it and stick it!... right to the plastic hull.

I think they little gadget cost me, like, $7 off ebay. I've had it 3 or 4 years now, and its still going strong.

Permalink Reply by Brian Jones on September 21, 2014 at 2:58pm
No apology needed, I dont know everything and have learned to listen and be greatful for shared advice. Havent worked on mounting the trans but. I cut the console today and made a detachable mount base for the ff and my cell phone. I had a slab of walnut beggin to be put to use. Three more coats of epoxy and shes ready to use.

Permalink Reply by David, aka, "McScruff" on September 21, 2014 at 5:22pm
Wood in a boat, any boat- that's a classy touch.
Keep me posted on the putty stuff. If it works, this could be a golden moment.