What time of the year do Bluegills spawn?

how long do they spawn for and where to find them in winter months.

Bluegill spawning is usually triggered by water temps, and an increase in the number of daylight hours. In my area, they typically spawn when the water hits 70-72 degrees on the surface, although they will feed heavily during the pre-spawn, when the temp is a little cooler. That's a great time to catch them, as I see nearly equal numbers of males and females, vs. nearly all males when they are on the beds.

In southern locations BG's will spawn most of the summer, while further North that fish might only spawn once or twice. It has been my experience that the bigger BG's will usually spawn first, and while the same spawning area will be used for weeks if not months, the first group to use the beds will be the largest.

There is much discussion on locating BG's during winter, a lot of it keys in on weed growth, and a shallower location early in the winter, then transitioning to deeper flats as the cold months progress.

ill hafta agree with tony on the bigger fish spawning first. i lucked up and found a group of big male copperheads on the bed this year on april 9th. i also saw hand sized bluegill and shellcracker on the bed here in ga in early september this year. tony was right on the money in saying they bed all summer in the south.

I start looking on Good Friday in the Carolinas and it usually aligns with the "Honeysuckle" bloom. If they bloom a little early then the gills may be on the bed early.....Also, how close is the full moon and are water temperatures above 66 degrees....These are good thumb rules in my neck of the woods.... 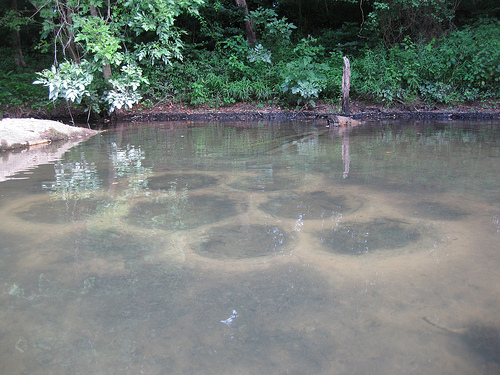 This always excites a bluegill fisherman!

Nice photo Jeffrey! Now, that's a rare site for our water in which we can see that clearly down below 5 to 7 ft. Beautiful spawning beds.

Thanks Leo...I have a few shallow flats in which there is baseball diamond sized areas of bluegill beds every year.....Dark water so I haven't been able to get any good shots to post. The largest bed I've ever seen was on Toledo Bend reservoir on the Louisiana/Texas border which was honestly the size of a football field and it was all Coppernose gills....I've driven 21 hours to fish that place during the full moon in June!!!

I'm always curious to know who made the beds every time I sneak close to the shallow area during the spring season. I've seen similar circles like those, with carps lingering around them, so I always presumed that the carps made those beds. However, I also detect gills on the sonar going in and out of the same area. It got me really confused to which the beds belong to. But wow, uniform circles..definitely made by the male gills trying to protect their beds' territory. Imagine the work hours those males have to put in running around those beds.

Hey Leo...carp are haphazard, dispersing spawners that invade shallow weedy areas of lakes and backwaters once the water gets to the mid 60 to mid 70 degree range. They don't make beds like gills or bass. Sometimes, their spawning territories overlap and the muddy disturbance from the violent carp spawning causes silt and debris to settle in and around spawning beds of other species, causing problems with the spawning success of other, more desirable fish.

I, personally, have never seen carp actually feed on bluegill or bass eggs from a bed, as some anglers claim.

Jim, thanks for the info. That's why I focus my attack on carps when I can during panfish's spawning periods. While searching for the panfishes, I have one line wet for carps as well, to hopefully reduce the carp's population by a few. Scared me half to death when a few of them dragged me right up to the tules and shrubs at the water line when I was in the tubes, praying that I don't get punctured and sink. I'm on an inflatable pontoon now, with the skins as thick as leather. with  huge fluke style anchor to position myself far away from the spawning bed, and casting into towards the shallow areas, I'm ready for those carps as the season approaches. Hope my fellow tubers will help me out to control those crazy carps and give the panfishes a chance to really thrive.

In my region they say the first full moon in may. That is not the only time they spawn because usually I'll catch them off there beds in July and on ocassion at the beginning of Augest. So you see there is a big window of opertunity to catch your spawning Bluegills. I'll usually put around the lake and look at the water from 1 to 5 foot and watch for the nest. I'll mark them on my map and then I can fish for them and I know where there at. Usually if I find then in July I can see there old nest and don't think the perch are going to pass up a nice bluegill nest, they often make frequent visits to them. Hope this helps. My area is Ohio, Michigan and Indianatri corner area.

here in illinois its usually in may and june.. but when the cottonwood trees start dropping there cotton like stuff its definetly time... Yes, here's a big male caught off the beds this past July and you can see his tail worn down from "fanning" the beds. They are definitely little engineers.....

Mikey-D replied to Bruce Tomaselli's discussion Locating Bluegills in Summer
"I would have to agree with Jeff on his reply 110% I have seen surface temps here in Va. 85deg. have…"
Monday