But no matter the bait, the float still has to do it's part to put fish on the bank. I prefer a slip float, due to it's versatility. I can fish it fixed or slip, and the range of depth it allows me is usually suitable for any situation I may find myself in.

The issue I have had in the past with slip floats concerns the manner in which they slide on the line. Early on, I purchased commonly available balsa or foam slip floats,  and they performed well......for awhile. Inevitably however, I would find myself adding more and more weight, or constantly twitching my rod tip to get my line to pass through the float. It seemed to get stuck, and in fact, that's exactly what was happening.

Those cheaper floats used a plastic bead molded into the stem of the float, and over time the line would cut a groove into this plastic bead as it slid through. My line would then drop into this groove, and become "pinched", restricting it's travel. There had to be a better way.

Then I discovered slip floats with metal inserts, or grommets, instead of plastic beads. These worked great, far better than the cheaper versions. The problem, at least back then, was availability.... none of my local shops carried them, which meant that I had to order them from one of the bigger tackle suppliers.... the shipping fees alone made the cost of the floats rather exorbitant.

So, necessity being the mother of invention, I decided to try making my own. What I eventually came up with has served me well for some time now. If you have need of a better slip float, perhaps you may get an idea or two from my design. 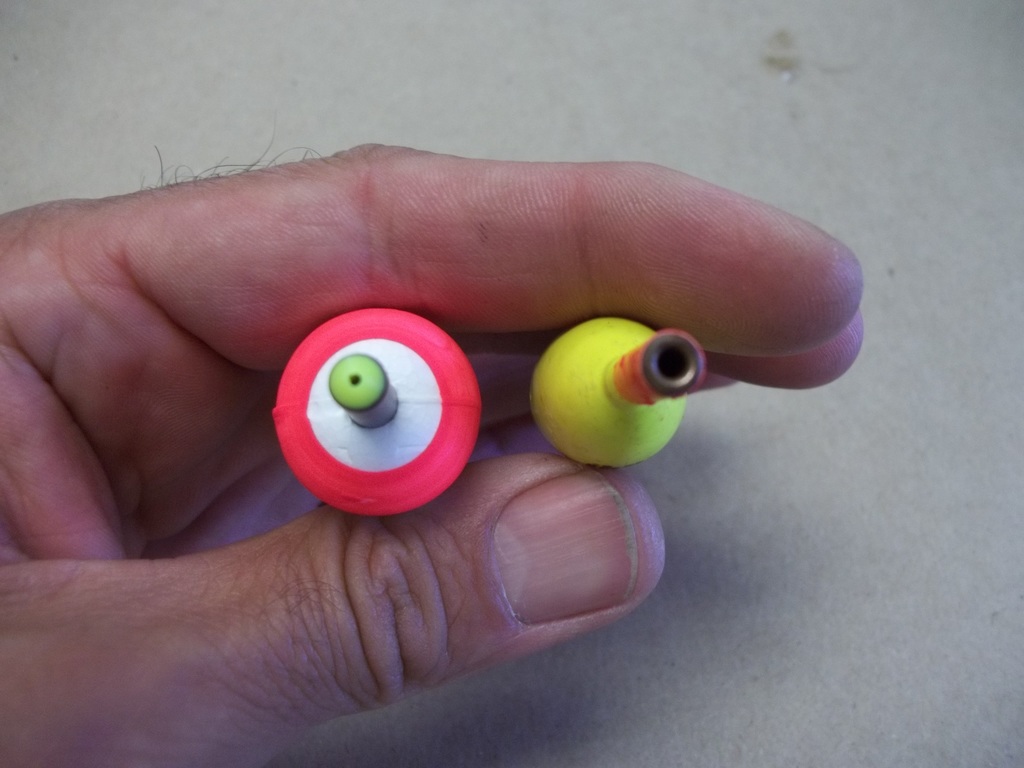 Here's what I use to convert that plastic bead float over to a higher performance version: Glass jewelry beads, 5mm flat washers, and a rubber o-ring that is a tight fit on the float's stem. 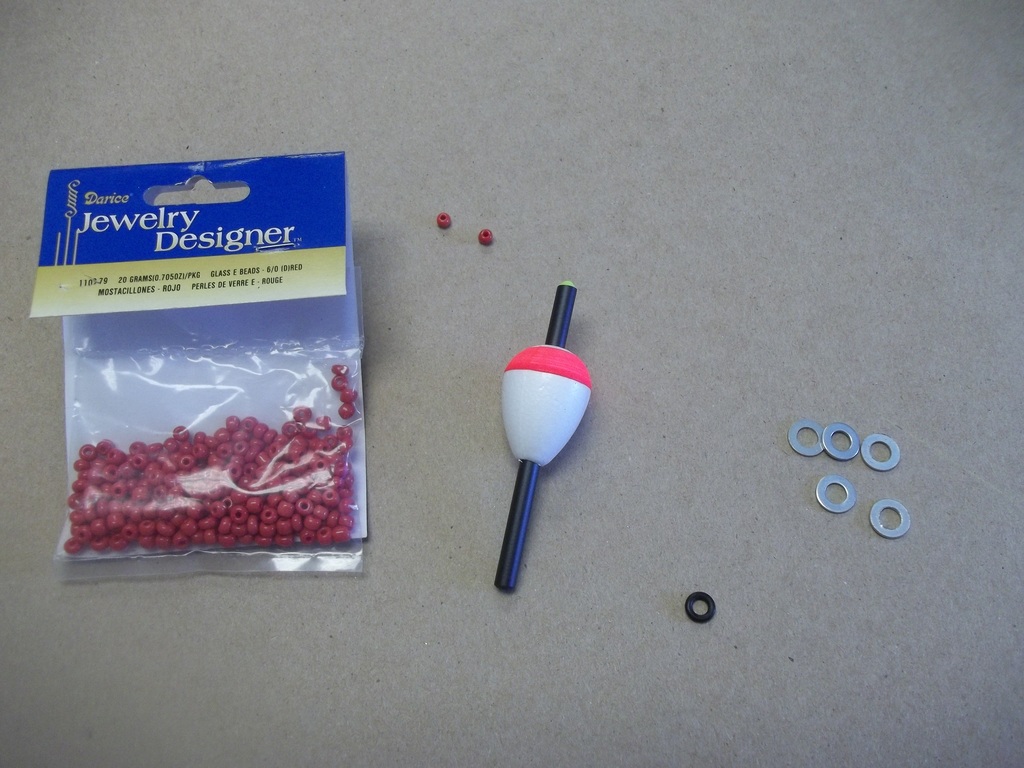 First step is to remove the plastic bead. I use a drill with a 1/8" bit. CAREFULLY! 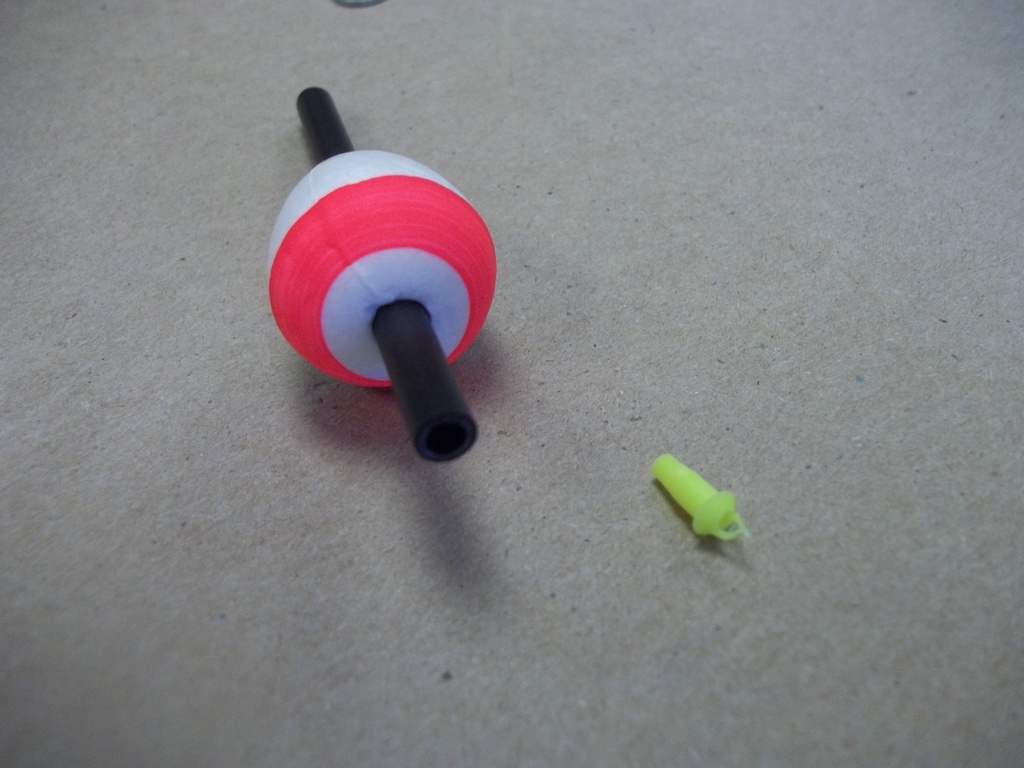 Then I remove the plastic tube from the foam body. It slides right out. I then take a 5/32" drill bit, and carefully enlarge the hole in each end of the tube... use the drill bit like a reamer, by hand, and enlarge the tube for a shallow depth... say 1/8". Using a tiny dab of super glue, insert a glass bead into each end of the tube. Note: the beads are not exactly the same size...experiment without the glue until you find a couple that fit just right. BE SURE not to get glue into the holes in the beads themselves! excellent read Tony... every year that goes by I find myself getting deeper and deeper into float fishing... there is a science behind it.

They work great as platforms for long distance jigging, Larry. Cast them over deep water and let the jig fall to the desired depth. Then jig the bait by pulling on the line.....

I make my own too. I use the tiniest foam floats, bamboo skewers and copper wire.

I end up with what I call "finesse floats." They only take .25 gr of weight to balance and will react if a brim even farts near them.

Federico don't get him started.

ok now I curious , what about the o-ring and the washers?

That is way cool! I might just have to give it a go real soon with the cool fall bite coming up and deeper fish!

Getting fired up for a long weekend with quality fishing weather throughout…..good luck on the…
16 hours ago
0 Comments

John Sheehan commented on Wade Jones's group Crappie Crew
"Likewise Mikey! Looking forward to pics of Slabs from you me and Greg!"
23 hours ago

"Here's a toast to you, Mr. Lynn. As all of us get older we do what our body allows. I hope you…"
yesterday

"Yes, he had to take part in the Daily Double Tradition! Lol"
yesterday

John Sheehan commented on Wade Jones's group Crappie Crew
"Hoping I can get some Slab Crappie before the years out. Spring and Summer yielded very…"
Tuesday