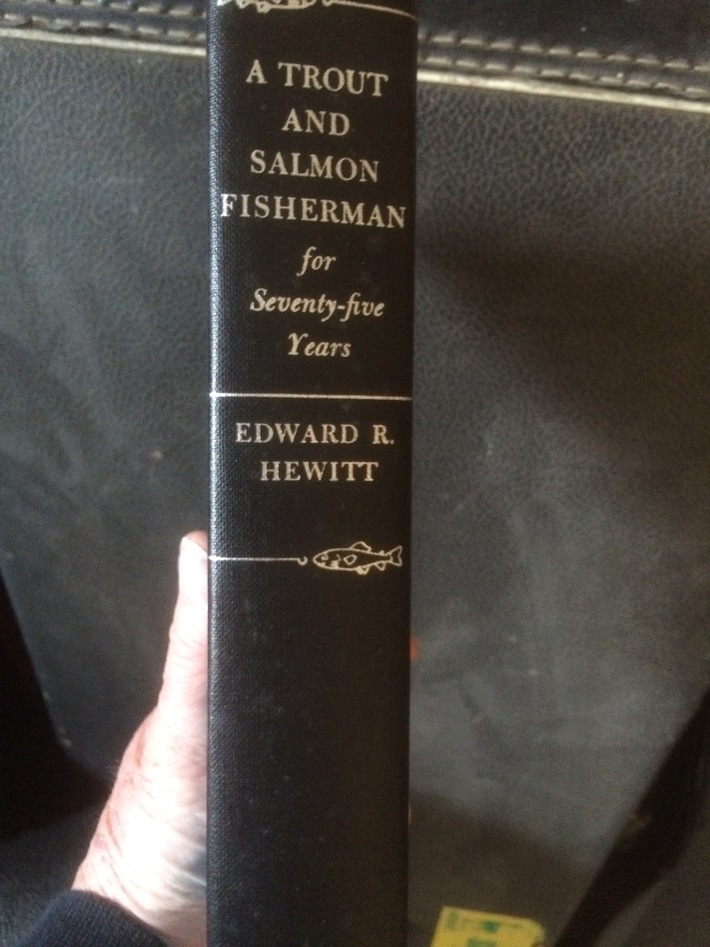 Edward Ringwood Hewitt(1867-1957) , son of an iron mogul and fifth of six children, lived in New Jersey's Ringwood Manor estate for 75 years during summer months.As a young boy he became very familiar with the fish  and other inhabitants of Ringwood Brook and Cupsaw Brook. as well as other waters in the Ringwood area. Before the Monksville reservoir was constructed , Beech Brook and the Wanaque River converged around the Northeast section of what is now the Monksville reservoir. Today there are vague remnants of an old fishing/hunting camp ,owned by the Hewitts ,in the woods by the north east section of the Monksville reservoir.These remnants consist of low rock foundations and small cement footings ,each the size of a small coffee can  boat anchor. Hewitt designed trout flies and was a staunch conservationist. He bought 2,700 acres including four miles of the stream in the Neversink watershed in 1918, and established a trout laboratory.It was  at his Neversink laboratory that he hatched imported Atlantic Salmon eggs from Norway and Scotland and hoping for a successful transplant ,released the fry into his private water on the Neversink stream  in New York State.Although a few fisherman are said to have caught Salmon the fish have apparently not endured. By the early 1930's, he was this country's leading authority on trout stream improvement techniques. Shortly before his death in 1957, Hewitt said that he wanted his ashes cast upon the Neversink, adding that the ceremony would give the trout a chance to get even. In 1987, Mullet Brook (which tumbles into the Neversink Gorge from the east) and its 40-foot waterfall, it was announced that the stream would henceforth be called Hewitt Brook.

Hewitt, was the creator of such flies as the Neversink Skater and the Bi-Visible,and has been called the "Father of Nymph Fishing in America" by Fishing Author , Edward C. Janes. After testing English chalk stream nymphs in Americas waters without much success he set out to study the nymphs of his home waters. He collected specimen's and discovered that most of the nymphs in faster American streams were brown on the back and yellow, gray or green on the belly .He tied these colors into his artificial flies and set the standard for nymph colors in  fly tying. He is the original patent holder of the felt-sole wading shoe and other innovations. Hewitt was friends and fishing companion with George LaBranche and Ambrose Monell, and together they advanced the sport of dry fly fishing for trout and salmon.

Ambrose Monell, sportsman, inventor of Monell metal and chairman of the board of International Nickel, bought thousands of acres in the Neversink Gorge area in 1903.Hewitt called Monell,"the best Salmon fisherman I ever met",and dedicated his 1925 work,"Secrets of the Salmon" to him.

George LaBranche is best-known for his two fishing classics, ''The Dry Fly and Fast Water'' (1914) and ''Salmon and the Dry Fly'' (1924). He was also a tournament-class fly caster. When LaBranche died in 1961, the late Sparse Grey Hackle (Alfred W. Miller) wrote that LaBranche ''was the prophet of what is still the distinctive and unique American school of dry fly angling.''

In the preface to ''Salmon and the Dry Fly,'' LaBranche gives Monell the credit for being the first to take an Atlantic salmon on a dry fly in this country.

I am not able to ascertain whether or not Joe Brooks , the Father of Modern Fly Fishing , ever met Hewitt ,but it is apparent Brooks knew of Hewitt's work. There are several references to Hewitt in Brooks' book , 'Trout Fishing'. Brooks credits Hewitt with coming up with successful 'Neversink Skaters'  and flat bodied Nymphs as well as the design of the Bi-Visible fly already mentioned. He also states  Hewitt wrote a dry fly article called 'Butterfly Fishing 'for Spur Magazine  in 1935. Brooks says of the article," He theorized that the Trout takes the Skating spider for a Butterfly and that the fish slaps his tail to knock the artificial  to the surface, then turning and picking it up." These 'Neversink Skaters ' Hewitt designed were big Spider flies.

Brooks in respect referred to Hewitt  ," as, inventive an Angler as any that ever lived ".

Like his predecessor, Izaak Walton, who wrote 'The Complete Angler',in 1653, E.R.Hewitt lived for 90 years, Both men are a testament to the peaceful longevity fishing can bring to a soul that loves the sport!

"Those were the Days",Tales of a Long Life" dedicated to wife 1943 Pub. Duell ,Sloan and Pearce

"Ringwood Manor,the Home of the Hewitts"1946 dedicated to his Mother

An account of his family and their days spent in Ringwood Manor in Ringwood New Jersey.The family of two parents ,six children and the Paternal Grandfather,Peter Cooper.Hewitt wrote the book when he was 79 years old as the last living member of the Hewitt family .The Hewitts lived in their Ringwood home for 75 years.Even at 79 years of age tales of mischeivous and imaginative adventures during youthful days are told with clarity.

'A TROUT AND SALMON FISHERMAN FOR 75 YEARS' – 1948 1ST edition – 338p – Scribners, NY – This is the first edition of the combining of Hewitt’s 2 earlier books, both now classics. “Telling on the Trout” and “Secrets of the Salmon”. In addition to being a masterful angler, Hewitt was a very interesting individual. He literally was to the manor born, coming from a very wealthy family. He continually experimented with both flies and gear and some of his patterns are still in use today, the Neversink Skater comes to mind. The stories about Hewitt’s unique skill are difficult to believe but were witnessed by many people who owed Hewitt nothing who will attest to the veracity of the tales .For example, with witnesses, Hewitt was sight fishing to a salmon. He made several casts with no take. Due to Hewitt’s reputation as an angler, some of the people began to quietly chuckle. Hewitt thought for a second and announced, I know what the problem is, this fish has only one eye. This made the onlookers laugh out loud. Hewitt made a cast to the other side of the salmon and the fly was taken immediately. Hewitt landed the fish and showed the doubters the one eyed salmon.

'TELLING ON THE TROUT' – 1930 revised ptg. of 1926 1st. – 216p – Schribners, NY – Ed Hewitt, either loved and respected or on occasion just tolerated for his overly enthusiastic attitude, he was non-the-less an extremely knowledgeable and innovative angler. This work includes his observations on how trout see, trout stocking and tackle which all remain important studies today. Also essays on angling in England.

'HEWITT’S HANDBOOK OF STREAM IMPROVEMENTS' – 1934 1st edition – Marchbank, NY – 82p – Hewitt was blessed with great wealth and by age 26 already had the pleasure of fishing the western US, Canada and Europe. His knowledge is notable and his stream conservation methods remain important today. Having purchased 2700 acres in the Catskills, including 4 ½ miles of frontage on the Neversink, he established his famous fishing camp later to be known as the Big Bend Club. Here he practiced what he preached about conservation. 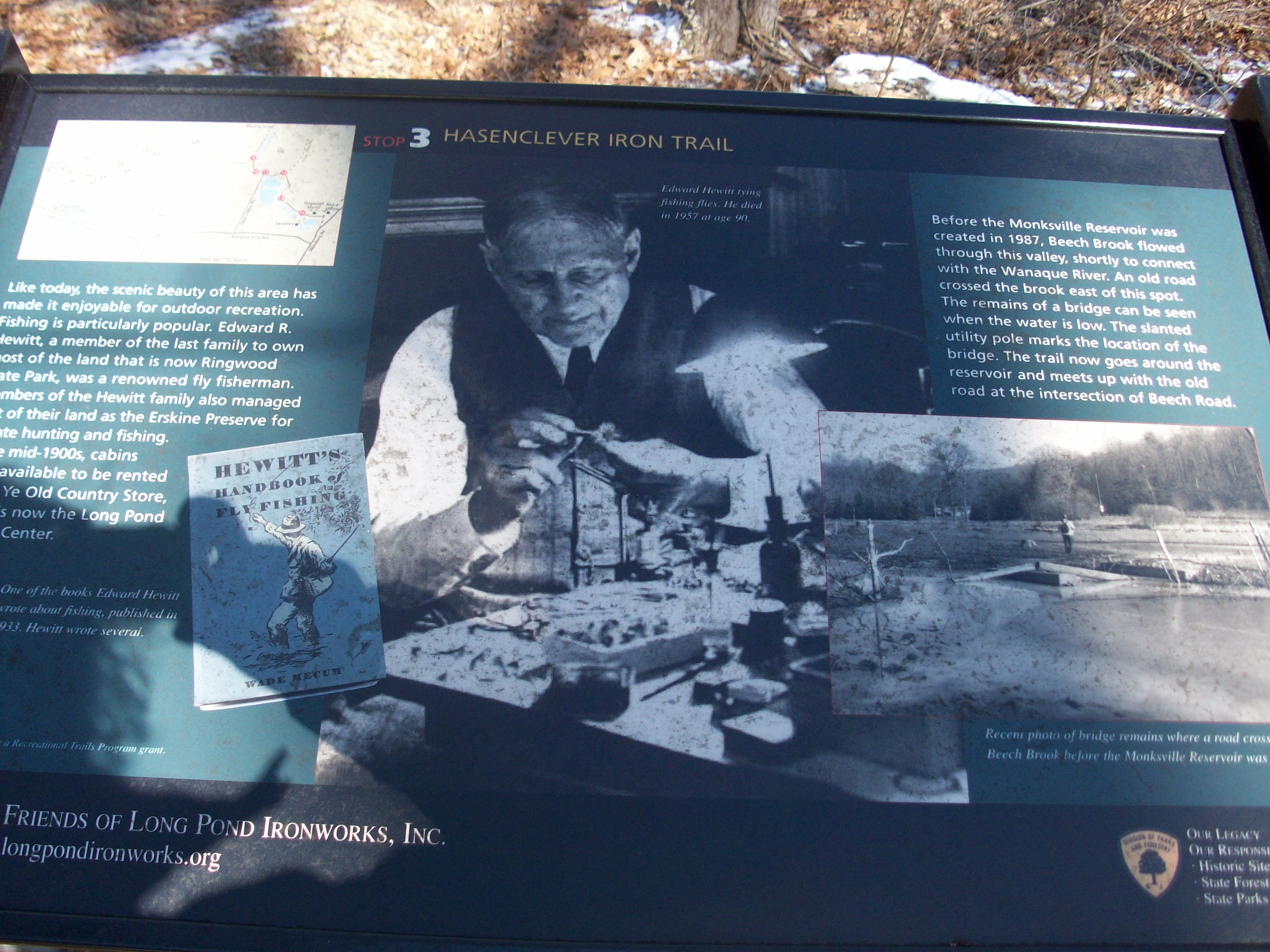 Beautiful sanctuary Carl and David .Thanks for taking an interest!

Thanks very much David and you're welcome Joe .Thank you both for reading .I am happy to spread the word about this local fishing legend .

"Thanks John….I’m going to try to find some and give it a whirl…..catfish are…"
7 hours ago

"I use crawler pieces on the floating Jig'-heads for Perch and Bullheads. Work…"
10 hours ago