If anyone lives in south or central Florida and likes flyrodding for bluegills please send me a note and let's see if we can arrange a fishing trip. I live in Avon Park with the Everglades, Arbuckle Creek and the Blue Cypress Lake area being my favorites. Would like to get to know the Fisheating Creek area. I prefer out of the way peaceful serene areas to large crowded lakes. I have a 14' jon boat that is set up for flyfishing.
michael.knowles68@yahoo.com

Mod good video, You looked scared! At least you got some gills, Been real slow on Lake Zurich. the spawn is for sure over! Manageing a few every day though.

Mod good video, You looked scared! At least you got some gills, Been real slow on Lake Zurich. the spawn is for sure over! Manageing a few every day though. Continue

Most of the time I fish with feather jigs and crickets. Been looking for a small spinner,beetle spin type, i found one on the webb. site fish-n-spin.com. It's a 1/32 oz. spinner and tube jig. I replace the tube with a feather jig. I am quite pleased with the results we are having with this jig. I still tip with crickets.

The contest formerly known as the Big Bluegill scholarship contest...

I'm currently working on a contest for kids that will be under the age of 16 years on September 30, 2009. It will now be known as the "Kid's Big Bluegill Contest".

We're going to be hopefully getting a little sponsorship from Cabela's or Bass Pro Shops, unless we have a member out there with a connection to another sporting good outfit.

The contest will involve a one week registration period. After all registrations are in there will be a 20 question science test on… Continue

For the three years I've owned my pond I have been culling the huge flathead cats to increase the bluegill and bass population. Two years ago I added several hundred 4 to 6 inch readear and BG to my 2 1/2 acre pond. They are increasing in numbers dramatically, and I'm catching some larger bass. The catfish have quit taking pellets. I think most of the large ones are gone. I have been feeding gamefish pellets but I can't get the brim excited about them. I'm not sure if it has to do with the fact… Continue

I'm considering getting one of these from Cabelas but thought I'd ask if any of you have had any experience with these or know anyone else who has. I'm wondering if they can do the job on gills, how much time does it take, and whether they are really worth it. The flavor of good gill fillet is really in the skin but hate scaling the dang things with a hand scaler or spoon. Am anxious to hear your thoughts. Sincerely, Bob

It was just KILLING me...

Had to do some work on one of the Upstream Flood Control Projects that I manage in my county, and just had to stand there and watch while the fish were going crazy!

These small lakes (10-30ac. surface area) are Federal/State funded projects on private land. The Conservation District I manage has an easement for operation and maintenance but I have never asked permission to fish in any of them (I do all my hunting and fishing on private land in the next county to avoid any perception… Continue

oops but it was a nice surprise nice suprise for the platte river in central ne. caught on a white maraboo miss

Another close up Mr De Mill 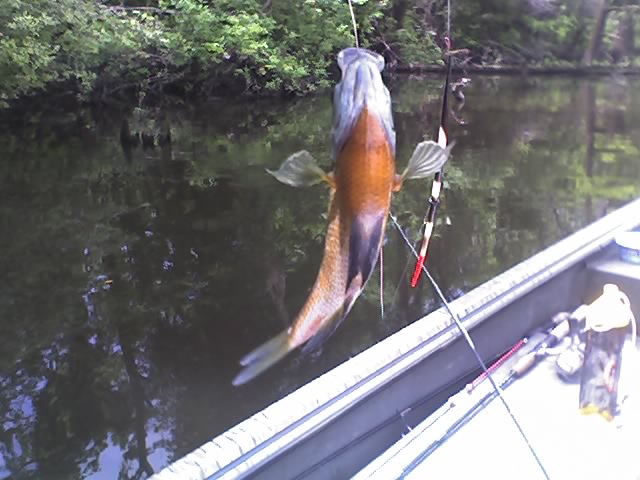 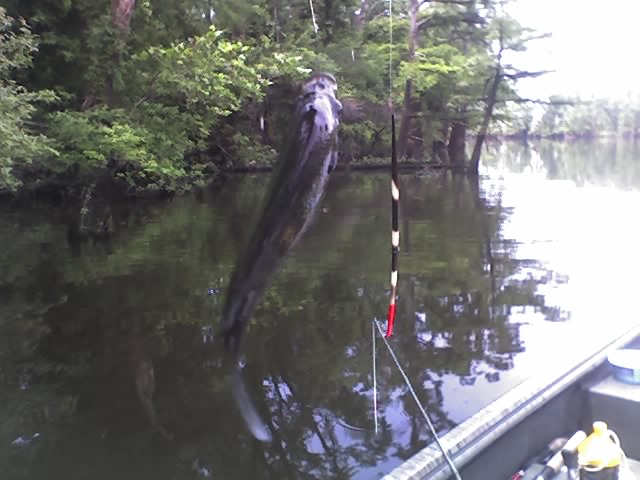 Went fishing between storms today, tried to take some pic with my cell phone ,caught some good ones but it's tought tryingto put them in the boat and take their pic at the same time. My porcupine quill is eight and a half inches long , this was my attempt, I'll do better next time.

Greetings...all,,,new member here, first time post.
Just read through the posts as to "Trophy Bluegills"
as to releasing back the big uns'... I agree a must do.... What is the membership thoughts about catching and keeping the gills off the beds before spawning is completed. I do not like to take them at that time...say leave them there for them to do their thing...more gills later for al of us to enjoy... Frogg2

Which is better mono filament of fluorocarbon

Recently I found myself with some extra time as I had been laid off from my job. After getting some things done around the house, the garage reorganized and of course some job searching. I found myself brainstorming about what I could do with my boat. I had recently purchased a 1975 14' Starcraft Aluminum hull boat with 4 bench seats in it.
The boat I owned previously (The Ol' Gill Getter) was a 1965 14' Crosby fiber glass hull boat. It finally got to many cracks in the hull and had to be… Continue

"The 6" Sluggos got three ."
yesterday

"Here are the catchers Mikey:"
yesterday