From cork to quills this group is here to exchange ideas for the best results on our homemade floats.

My latest batch of quill floats have less paint to show more of the natural quill colors. I used large copper loops to accommodate fly line. I used a satin finish to reduce glare. They are pictured…Continue

How to Use Stem Swivels For Float Making 8 Replies

I made a few floats from my first crop of ornamental grass/bamboo/reeds I transplanted to my yard summer before last. I painted these but I wish I hadn't, the body material is very slick and the…Continue

You need to be a member of Float Makers Bench to add comments!

great looking float.  perfect size and i'll bet it will be sensitive. Thanks for sharing

Guess it did go through. It's not real purty, but it works... 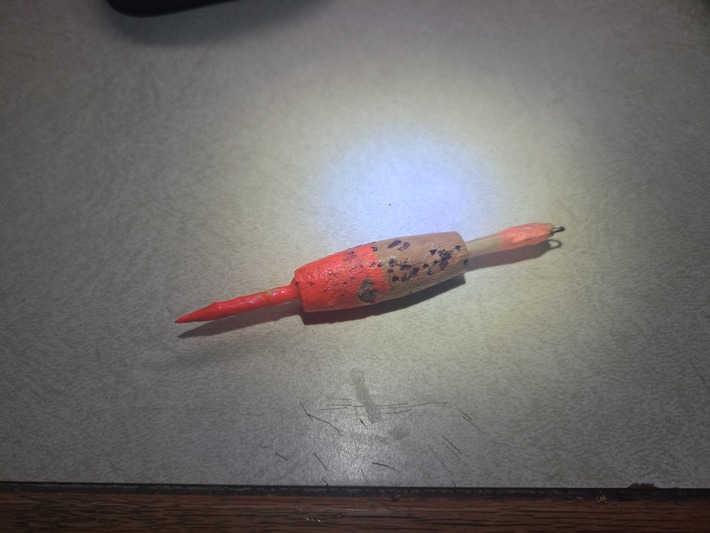 Well it will be a bit, I have to download the pic to the computer to put on here. For some reason, I'm not seeing the add a pic on my phone app.

I am just getting started with a fly rod. Been laying with it off and on for a bit. So most of my fishing is with an open face reel. for the real light jigs I tie, I came up with a weighted float that detects bights that lift the bait. I'm sure I'm not the originator of this style float, and not trying to take the credit for originality. I took some used wine corks I got from a local winery after a taste testing they had, bought some colored craft dowels at Walmart, and drilled a hole as close to center as the cork would allow. secured the dowel in the through hole with 5-minute epoxy, and let dry.

After they were good and dry, chucked it in my bench top drill press, some 80 grit sandpaper strips, and turned them down to about the size of the Styrofoam ones on Walmart. marked one side a little above center, and estimated where 1/3rd quadrents would be and drilled holes to the center at these three locations. Theen took some squeeze weight,( not sure the size as the print is worn off the bag), but a size or two larger than BB size. Again using epoxy, put a dab in the hole, then squeezed the weight in. Let that dry. I then took a paperclip and fashioned a small hoop and using thread tied that to the un weighted side, I did this so when it's not being messed with it will stand up, but should a fish come along and hit it from below, and actually go up with it, as crappy will often do, and have had other fish do it as well, the float lays down when the bait is lifted.

The second advantage to this float is it casts a country mile compared to a 1/32 or lighter bait. I will include a pic of the finished float shortly. It's on my phone, not this computer yet.

Well, Damon, I wasn't asking you to make them for me. I just want to know the basic mechanics of how they are put together. I certainly can make them myself.

Comment by David, aka, "McScruff" on June 20, 2016 at 6:25pm
I don't cast my dowel floats with fly line.
I USE a fly rod as a light spin-casting rod.
The floats are simple to make - sometimes we over think these things. But they are ungainly and heavy; not suited to fly casting

Well done Damon on the documentation. Keep those kind of videos coming.

Experiment. We don't know everything you'll need. That's how I learned to make float.  There was no one to tell me what size, what materials. It was a developmental path.

How are you using your fly rod, with spinning gear or fly gear? If you're going to be backcasting and roll casting, I know my floats would be too heavy. I'd start with balsa or basswood.

Remember no one told the Wright Brothers everything they needed to fly. They had to experiment.

My videos are nothing more than a document of the journey I took:

If I can do it Bruce it can't be complicated. I don't know what you have in mind when you say dowel stick bobber. My discussion Easy Quill Bobbers has the basic instructions for goose quill floats. I can fill in any gaps. The ones I make with sticks have some sort of body like cork or corn cob. These may be too heavy to cast on a fly rod.

Bruce Tomaselli commented on John Sheehan's group East coast Ice fisherman
"Do you have ice in your area?"
23 hours ago