Ok folks, I bought my first boat this year. I am going to get a off the bank for awhile( even though, I still love bank fishing). What I am wanting to know is some ideas on setting up my boat. Could you post pics or tell me how your boats are setup,like anchors, trolling motor, fish finder other gear. Thanks Dwayne

Dwayne- I'm over 60, and I've had many boats for many purposes during my fishing lifetime, and I decided this will probably be my last, so I built what I wanted. I started with a G3 Aluminum hull at 18'6"...big enough to be comfortable and safe for a big guy, but something I can load and unload by myself. I put a 90 hp Yamaha 2 stroke, which is a little overkill for a tunnel hull, but the gas mileage is just a sip. 18 gallon tank lasts a long time.

I put a power pole on the back and it's the best investment you can make if you fish shallow water, because it makes anchoring and moving so easy- push a button...no wet rope around your feet.

I put a RayMarine GPS/bottom finder ( I HATE the term fishfinder) on board at the console, and a simpler Hummingbird up front on the trolling motor.

The trolling motor is a MinnKota heavy duty tiller model, not remote controlled- I think I regret that.

I think the best thing I did was go top of the line rod holder systems from TraxTech. The ultimate in flexibility in being able to reposition and adjust rod/net/holders.  I can set up for trolling, or crappie poles, or live bait fishing and get to the rods easily. And when I'm traveling the rods are secure and not banging around in the bottom of the boat. Here's a couple of pix: 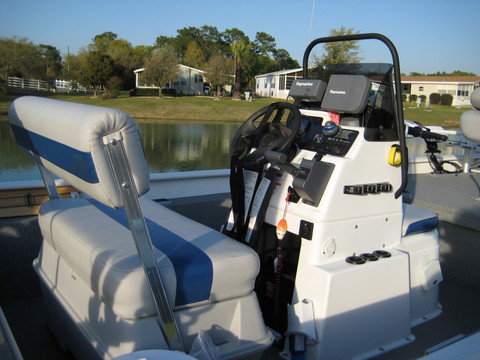 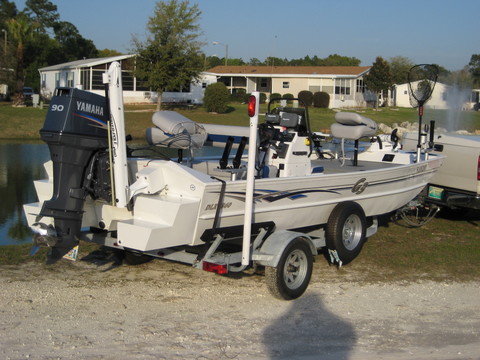 One helluva boat! The Titanic's got nothing on you! :-)

Wish I was your fishing buddy!

I'm working towards a smallish brim boat this year, sort of a "puddle jumper" type boat. Ive never had a boat just for fishing, but like you I think it's time. I'm more interested in ponds and small waters, and opting for the flexibility a boat offers. But I want to keep it easy to manage and oriented more towards the spur of the moment. I've thought about a Geenoe, or something like it, tricked out with plenty of goodies.

It also matters that with momma out of work and gone back to school, money is not flowing in rivers around here!

Don't know where you live, but keep an eye out on Craig's List on the internet for good buys on used platforms...

Here is a good site for the Tampa FL area, but it will give you an idea on what is available: http://forums.capmel.com/post?id=3032479&highlight=gheenoe+sale

Permalink Reply by Nathanael Deloach on February 22, 2011 at 10:21am
Don't be afraid to dig right in and start over.  I built my own plat forms in order to make it easier to have my kids in the boat. It also made it easier to have control of the boat since I had my "perch" on the front with the trolling motor and the depth finder.  Cost me about $300 to make it as you see in the pictures.  It is the cheapest way I know to get the "amenities" of the the higher dollar boats.  Have fun with it! 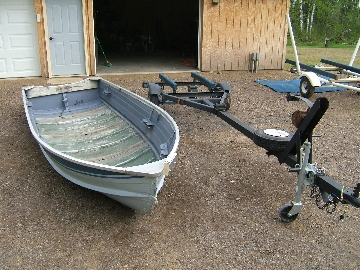 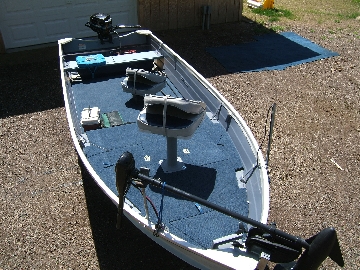 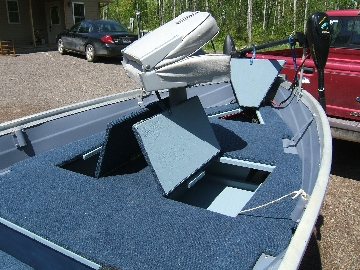 That is kinda where I wanted to go. Im more accustomed to sitting in the back of the boat, as I came up with canoes. It's also relevant to my situation that many of the places I can get into are overgrown 'southern tea' waters, requiring more of a low profile affair. I can't really see a poke boat with a front throne on it!

But I do like the way you've transformed the thing. It would be easy to make a boat that could be both useful in more open water and also perform as a poke boat.

Front seats that can dismount are an option, I suppose.

Nonetheless, something along that line of thinking is what I was picturing. Right now, I'm scrounging around for a decent boat as the raw material. You really are inspiring with what you've done there.

Thank you very much.

I too was rased in canoes.  I have found that the higher I am the better I can "site" fish.  We have coffee stained water here in N. Mn. and I find this set up most useful in those lakes.  I can't explain it other then I can just see everything better.

Another huge advantage for this set up (at least for me) Is that I have complete boat control. If you notice my trolling motor you will see that it is a transom mount. I origionally tried to control the boat from the rear but found it very limiting.  So I "jerry rigged" the transom  motor to the bow and haven't looked back.

I am an agressive fisherman, I don't like to troll around.  So this set up helps me "attack" my fishing spots which are mostly along sub/emerged weed lines and shore lines.  Unless it is really windy, I never have to anchor which is the way I like it :-)

"I too was raised in canoes.  I have found that the higher I am the better I can "site" fish.  We have coffee stained water here in N. Mn. and I find this set up most useful in those lakes.  I can't explain it other then I can just see everything better."

I understand Nathaniel. Thanks for the explanation. I have family in MN and  have lived there over the years, in the area around Forest Lake and Wyoming. I know the sorts of lakes you would be fishing in.

It's a bit different here in South Carolina. The lakes here are either huge impoundments, or small "ponds." The shore lines and bottoms are mostly "soft." These lakes are not really the issue, except for the open water sections of the largest lakes, which are not suited to light john boats.

Much nearer to home are many smaller lakes, ponds and river systems, and I expect to get into these often. These are the typical southern ponds and tea-water swamp rivers, complete with moss hanging from the trees. In the ponds the throne will be nice. But in the rivers, it is a problem, due to the low brush and trees. BUT, if I had a front seat that dismount,s that would be the best of both - a "throne" for the more open ponds/lakes, and which can be taken down for the rivers.

As for the boat, I'll probably end up with an old fashioned southern "john boat." They are common around here and can be had for a low price. They are also just right for pond poking and our brushy, swampy river systems. I may have already found one, in fact.

Now, the john boat is not the prefect boat, if such exists. But for the different types of waters I can get into, it is a good compromise between practicality and comfort. They are also pretty basic, which is good for me and my minimalist style.

I would expect to outfit the stern station with a comfortable seating setup and "working features" like at-hand stowage, a depthfinder station and possibly some deck segments for poling.

Mid section would be devoted to passenger seating, battery and stowage.

The fore-end in my southern "pond boat" would feature a small decked section with a socketed pole seat and trolling motor arrangement. Under deck stowage seems a good idea, too, for some much needed weight in the front. John boats tend to ride high in the front, so some help towards holding down the bow might be handy.

I appreciate your many pictures, which I'm saving as inspiration. You have done some great work on that old shell!

I appreciate the compliments guys but I don't feel like I have any more skill then the next guy. If I can do it any one can do it :-)  All of the work was done with a jig saw, pneumatic angle grinder, staple gun, drill and scissors. My advice would be, don't be scared to jump in and do it.

David- Sounds like you have a great plan for your boat. I lived in NC for 7 years and can picture the type of lakes/ponds you will be fishing, there is some GREAT Gill fishing down there!   Built in Versitility would defidently be a plus.

I did upgrade my front seat for last summer. I wanted it to be adjustable (up and down).  As a result the mounting system I purchased allowed the seat and mount to be removed, which I found very helpful in certain situations. Also, I mounted the battery in the bow to help with nose weight especially when I was in the boat alone. With out it up there I had a hard time seeing over the bow when I was driving around. :-)

Good luck and post some pictures when you have it finished.

Permalink Reply by Dwayne Denison on February 22, 2011 at 10:47am
Nathanael, I too have a v hull. I am wanting to mount a front deck, but cant figure out a way, without drilling holes in side of boat. Nice boat by the way......Dwayne

Permalink Reply by Doug Dodson on February 23, 2011 at 5:10am
How about making some brackets that look like conduit clamps, maybe 3-4 on each side, screw them under the ply, and then your platform would mount by hanging on the gunnels? It wouldn't slide because of the shape...

"How about making some brackets that look like conduit clamps, maybe 3-4 on each side, screw them under the ply, and then your platform would mount by hanging on the gunnels? It wouldn't slide because of the shape..."

"Thanks for all the kind words. Yes, this is a true giant of the freshwater sunfish world. It…"
2 hours ago

"Awesome job Tim,I remember that catch.I got one closed to 2 and was just shocked when i got it…"
yesterday