Many of my fishing buddies devote most of their time fishing for Bass....or Muskies.....or Walleyes, but rarely do they target panfish.....I enjoy my time on the water with them, and try not to spread myself too thin throughout the whole wacky bunch....however, when I start to get razzed about how often I like to fish for bluegills by my "buddies"....it seems more like ridicule.

This is the kinda stuff these guys send me....…

It has been a very short, and uncommon type of winter in northern Illinois.....with the late start to the ice season, gill fishing has been sub-standard at best......but the bass fishing has been tremendous....here are some fish from this years 3 week ice season.… 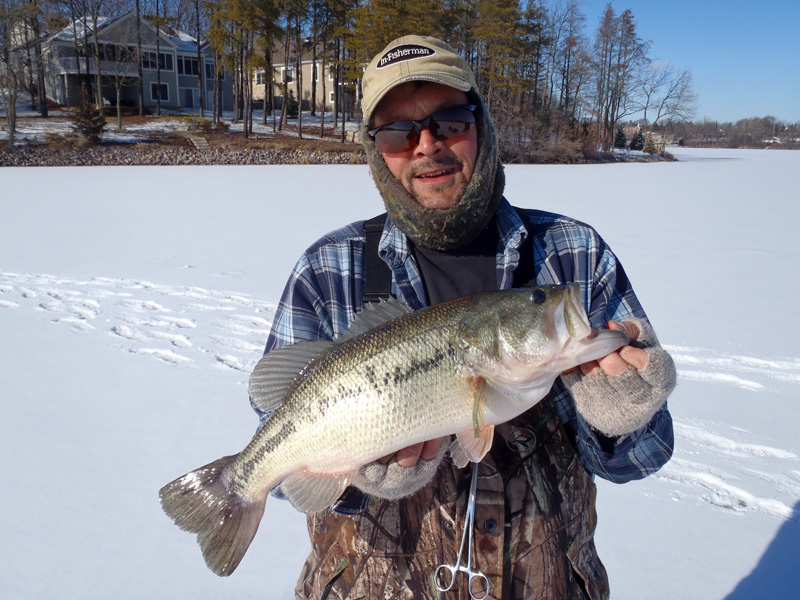 Who is this un-named fisherman?

Check your local listings on the Sportsman's channel.........… 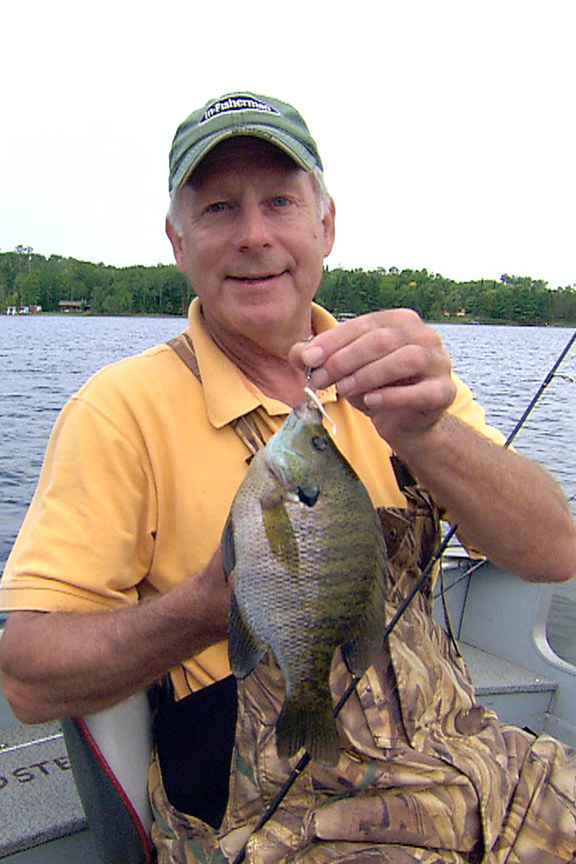 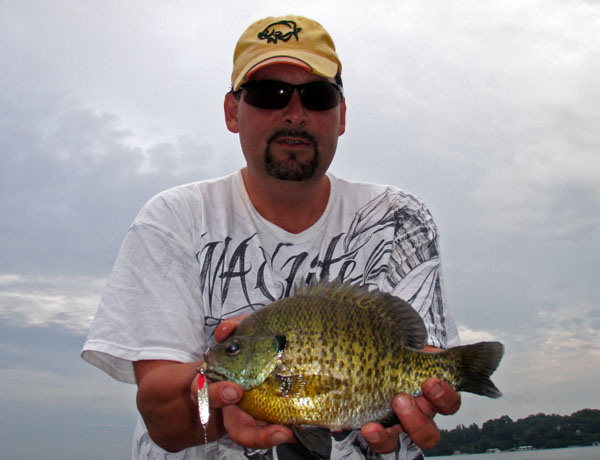 Lake Geneva is 7 miles long, and 2 miles wide......during the summer months, the lake is home to a vast amount of pleasure boaters, jet skiers, para sailors, and the like.....The shoreline of LG is dotted with extravagant 7 figure homes which become the talking point of several large cruise ships that offer tours of this amazing body of water......I've had the pleasure of fishing LG hundreds of times over the last 30 yrs, and during that time I've had the opportunity to explore its intricate…

Fished Lake Geneva with Rod Lee today 10am-4:30pm....scoured vast expanses of deep weed edges in search of bluegills between 10am and 2pm.....virtual dead sea. Slid the boat over deep water for a look.....nada.

We headed back to our original starting point in 15 fow for another drift.....following my previous gps track, we drifted bobber sets at 10' down.....and dragged 1/16 oz spoons with the hopes of scraping up a few fish.....I had already chalked the day up as one of sorrow…

On our photo page, you will find the flash uploader, along with a simple uploader. On this page you will also find a "Terms of Service" link that explains the guidelines to proper posting in regards to picture content.

The 10 MB file limit allows some of the highest resolution pics to be uploaded to our gallery. Many of our members use hi-res features to… 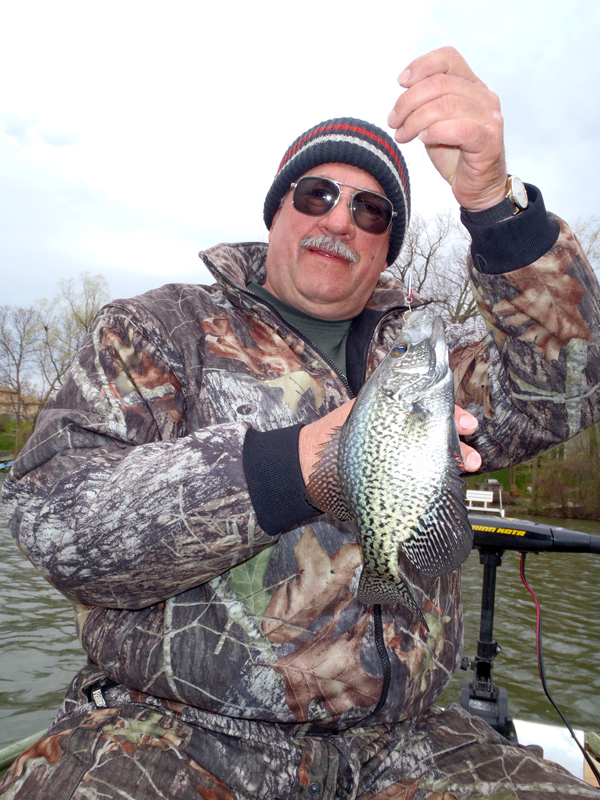 Last week I ventured back to an old farm pond that I used to fish in the early 80's.......small, about an acre....small feeder creek coming in and a substancial dam to slow the flow.....I used to catch some really nice Gills and big Largemouth there back in the day.
Traveling light...spudbar/bucket/vex/pole/scooper....I finally made my way back to the pond only to find someone fishing it....I approached in a kind manner and asked the very old gentleman if he would mind if I also fished the… Continue

Located just slightly north of the 42nd paralell, we experience 12-14 weeks of hardwater action every year......and the games are about to begin! 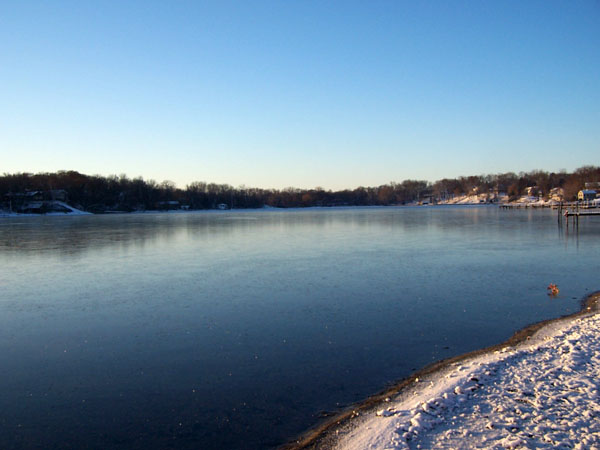 My primary box is armed with an array of Demons, Marmooskas, Hali jigs, Rat finkeys, Moon glo and glitters, Gill pills and an assortment of horizontal jigs that are at the ready. 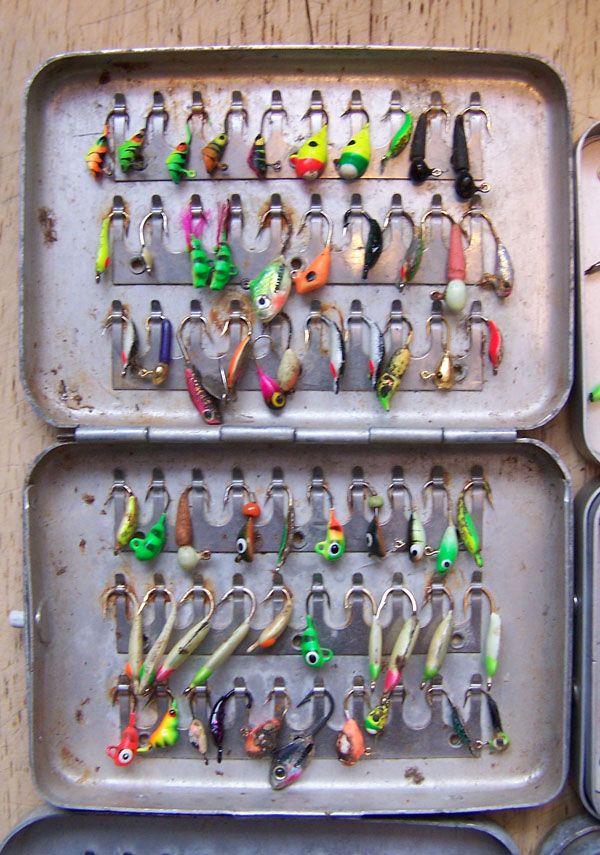 Deep water spoon presentation........Using light braided line ( 2-3lb dia./ 6lb test) and Fluorocarbon leaders.... a small barrel swivel to make leader connection and a small snap at the spoon end....DO NOT attach a split ring to the lead end of the spoon....use a small quality snap instead.
I like to make long downwind casts and let the spoon fall on a taught line to detect bites on the fall.....once on bottom, I snap the spoon up a few feet and begin a very slow retrieve with an… Continue

"Thanks Mikey-D….exactly……Albemarle has an abundance of creeks and rivers that…"
9 hours ago

"Nice work on the predators John…….Tuesday tradition….fishing with Greg!"
9 hours ago

"I do a couple of rear drag shimano's those things are almost indestructible. "
14 hours ago

"I am right there with you Mikey. Self Sufficient as much as we can be is so essential!"
14 hours ago

"YES! Outdoor Life is essential for happiness. Lots of stories on that wall!"
14 hours ago

"Thanks Mikey! Pulled tis one out of the Pads with a Broomstick! An old 80's BPS Rod that…"
14 hours ago

"Thanks Jack……getting into the summer grind…"
18 hours ago

"I like that approach, I’m addicted as an adult because all of my family got me outdoors in…"
yesterday

"Great bucks. You sure put some time in the woods."
Monday