The chores can wait

My home is in shambles. There are window frames in various stages of paint, vehicles that are in desperate need of a wash and polish, and I believe I overheard my wife talking to the local farmer about renting sheep. I can only presume that means she thinks the grass is too high……..again.
Anyone with any lick of common sense would start working to alleviate this list of priorities. I decided to go fishing.
Who wouldn’t rather spend an hour by the water with a fishing rod in hand… Continue

I had tied up some “FishnDave’s Flashback” flies. I like this simple pattern for early season stained waters, but have found they work all season long, even in clear… Continue

Doozie or Woozie I'm not sure which

This entry is merely an outlet for my excitement.
While only fishing for 1 hr. each day, this past Friday and Saturday evening are going very deep into the memorable fishing trip vault.
I need to get some photos hosted, then put my weekend into words...................if I can find the right ones.
(My personal journal reached six(6) pages - from a measly two(2) hours of fishing.)

Teaser: What does one get when you mix flat water, a child, a flyrod, and an educationally… Continue

The following words are used to describe a bluegill.

The following words are descriptive for largemouth… Continue

The beat goes on.

It's getting dark here much earlier now. I continue to hang onto the thought that I have until 9:00pm to get some form of time into a fishing trip........................the honeymoon is obviously over.
I also seem to have contracted a new disease - AllIseearefeedingbluegillitis. It's an extremely horrid infestation. The only relief seems to come when I stand beside the water with an ultralight in hand.
So, seeing as how my fever spiked last evening (measured by the knee-jerk… Continue

I had a few shipments to go out a few days ago, and was greeted with the "We'll be back at 12:30pm" sign on the door. It was 11:20am.
I had ZZ (my oldest) along and asked him if he wanted to get some fresh fish for lunch.
He needed some persuasion, but finally gave in. I grabbed a rod,… Continue

The rain set in here in southern Pa on Friday afternoon. Saturday morning we received the cancellation calls from the soccer coach, followed very closely by the afternoon baseball game cancellation.
Both were ok by myself, as that merely opened up quite a few hours to get some work done. Sunday morning greeted us with more showers, and passing downpours - so more time open.
One can only work with lure making so long before it gets the best of them, so I made the announcement that I… Continue

I decided to use my creative side yesterday. I took some bailing wire, and bent it in a semi-circle so that it dangled right out in front of my Aquavue camera, which incidentally looks just like a bluegill.

Then I tied a short little piece of monofilament to the end of the wire, attached a severely overbent hook so as not to injure any fish, and added a big chunk of nightcrawler.

How does "Big Bluegill" feel about conservation?

Big Bluegill members are a gang of anglers who know they're on to something special.

The bluegill is really the perfect fish when you think about it. Perfectly satisfying to fly fishermen and bobber slingers. Equally satisfying for ice fishermen and kayakers. Beloved by catch and releasers, as well as those who fish to dine. Targeted by the trophy fisherman, and the folks who just crave… Continue

The following story is a press release from the Wyoming Game and Fish Department. 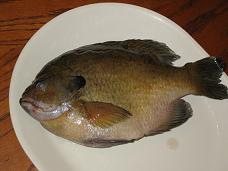 CHEYENNE - One of Wyoming's long-standing fish records was broken last month with the catch of a new state record bluegill, besting a record that has stood for 20 years.

Wheatland angler Rod Horsley caught the record 1.92 lb. fish on a fly rod from a stock pond near Lusk using a… Continue

Do bluegill spawn more than once each year in the Northern U.S.?

We all know that bluegill will spawn multiple times in the Southern U.S., but will they do the same in the North?

This question was addressed by Dr. Dave Willis of South Dakota State University. Dr. Willis is a Distinguished Professor who joined the Department faculty in 1987. He assumed the role of Department Head in 2008. He is also a member of Big Bluegill.

This commentary was originally posted in the world renowned pond management forum "Ask the Boss". His post was… Continue

Stunting is easy to define--slow growth.

In panfish populations stunting usually occurs when there are so many panfish that there is not enough food to go around. That is why I crawl up on my soap box so often and state that largemouth bass are KEY in controlling numbers of panfish in pits and ponds.

Big Bluegill has a theme video! Not for the faint of heart!

A friend of mine from the NEFGA forum took the photos of big bluegill that he could find and made a video from them. I thought it was pretty awe-inspiring. If you have a picture of a big bluegill upload it to the www.bigbluegill.com website and perhaps we can make another video sometime in the… Continue

Relative weight, sometimes abbreviated as simply "Wr", is a reference to how much a bluegill should weigh for a particular length.

If you look at all bluegill in a particular region of the country, the fish that would be at the 75th percentile, or bigger than three out of four fish is given the designation of Wr 100.

Therefore, if you catch a fish that is 10% heavier than the 75th percentile bluegill for your region, your fish will be given a designation of Wr… Continue

Bluegill growing at their very best.

These two bluegill represent what the approximate maximum growth potential in the Midwest can be, if you keep fish's bellies full at all times. Typical bluegill grow significantly slower, but these fish have been fed a high quality Aquamax Grower 500 and Aquamax Grower 600 diet. This program has… Continue

When it comes to bluegill, how old is "old"?

I posed the question to biologist Daryl Bauer what qualifies as an old bluegill, and asked if he had sampled some really ancient specimens in his years as a fisheries professional.

Here was my question.

"Actually, I'd like to know from Daryl if he's seen any truly ancient bluegill in his sampling days. You know, like 12 or 13 year old fish. I've probably aged, or assisted in aging somewhere around or over 200 bluegill, but haven't run across any real oldies like… Continue

The following blog will document the introduction of a new pelleted feed for a specific group of bluegill. Eventually the brand and formulation will be revealed.

Food "A" has been in use for a group of bluegill for 1 year. These bluegill are currently age-1 and age-2. The fish grow well on food "A", and seem to eat vigorously.

Food "B" is the feed that we wish to convert to.

Food "B" was delivered to my house at 1:30 p.m. today. The feed was then brought to the… Continue

Throughout late summer and early fall, the larger shellcrackers move into several ox-bows off the upper Savannah River to feed and spawn. Through trial and error, I have figured out that one must take on a mentality similar to that of a trophy bass fisherman in order to catch these fish. Like a big bass, and a mature buck for that matter, these fish do not get big by being stupid, so outsmarting them is the key. One particular ox-bow lake that my father and I frequent is riddled with flooded… Continue 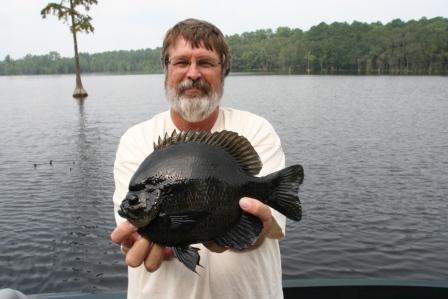 "This bluegill measures 10.75 inches and weighed 1 lb 10 oz on a hand held scale. It is a coppernose bluegill, stocked in December, 2005 into Richmond Mill Lake, a 125 acre impoundment outside Laurel Hill, North Carolina. The fishery is a combined stocking of feed trained largemouth bass up to 6 pounds with a remnant population of… Continue

RALEIGH, N.C. (May 30, 2008)– A last minute decision to go fishing with his mother netted a 13-year-old from Rocky Mount a new freshwater fish state record.

Travis Jackson reeled in a 4-pound, 15-ounce redear sunfish from a private pond in Edgecombe County on May 19, using a worm as bait. The fish measured 15 1/16 inches in length and 18 1/8 inches in girth.

According to Arlene Jackson,… Continue

"HEY JOHN IS THAT A PICKERL OR A NORHTERN ?"
4 hours ago

"THANKS GUYS FOR THE COMMENTS , I REALLY APPRECIATE IT..."
4 hours ago

"Nice batch of fillets."
9 hours ago

"Love the shots with the old Classic Flyrod ."
22 hours ago