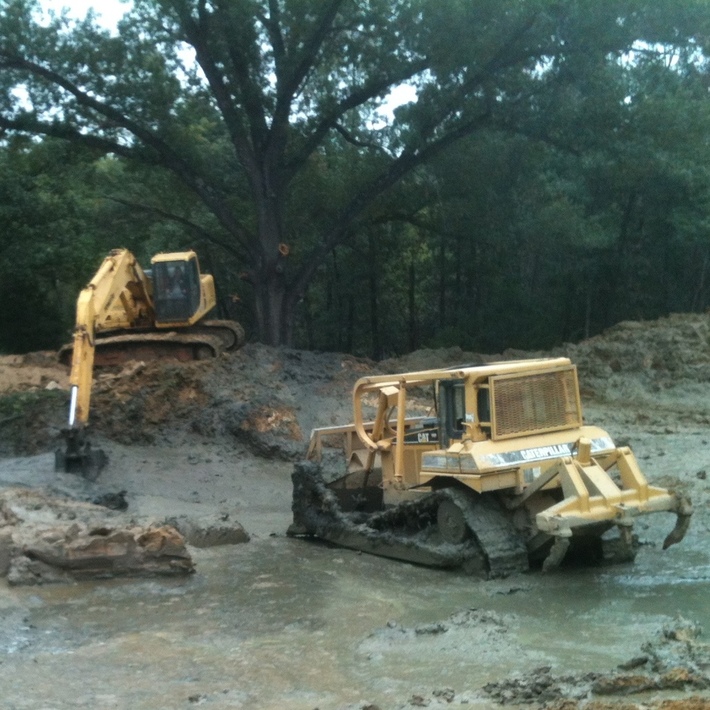 Back in 2013 I had a pond cleaned out to dry dirt and made bigger. Some of you might remember that I ordered Coppernose bluegill but received green sunfsh and bluegill mixed in with some kind of…Continue

Started this discussion. Last reply by Long Creek Arkie May 8, 2017.

Can anybody tell me the average growth rate on Coppernose bluegill. Before I stocked my pond nobody could tell me if the would live in Northern Arkansas. This is my basic pond.I dug a new pond in…Continue

Started this discussion. Last reply by Long Creek Arkie May 13, 2016.

Can someone please shed some light on something that happened to me? I feed my pond fish nearly every evening. On June 26 through the 28th the fish completely quite eating. My first thought was the…Continue

Long Creek Arkie has not received any gifts yet

Back in 2013 I had a pond cleaned out to dry dirt and made bigger. Some of you might remember that I ordered Coppernose bluegill but received green sunfsh and bluegill mixed in with some kind of mixed breeds. I was very disappointed in what I received from the hatchery in which the owner never made right. In the next seven years I culled out all the trash fish and kept feeding the Bluegill. Now the update, I have caught largemouth bass 24" long and less so I know there is bass in the pond but I…See More
Jun 27, 2020
1 Comment

What date is Independence Day?
July 4

What state are you from? This can help us get together for fishing trips!
Arkansas

That's a common misconception among pond owners, that if one feeds it will prevent stunting.  Those bluegill will spawn this year, possibly even more than once if you're feeding a high-protein food small enough for them to eat such that they grow at an optimum rate.  For 1" bluegill you should be feeding a food no larger than 2mm; your local Purina dealer can get Aquamax 300 for you, which would be the right size for now; a month from now you would go to AM400, then a couple months after that, AM500.

If you wait a year to stock bass, you'll have thousands of small bluegill and it will take three years or more to get them under control, and even then it's not guaranteed you'd ever get the bluegill under control enough for them to get big.  Most pond management advice that is dispensed by hatcheries is geared toward big bass, and big bluegill are only an afterthought and not taken seriously.  If you want big bluegill, you have to do things differently.

If it were my pond, I would stock 80 fingerling bass now, along with ten or twenty 4-6" bass, if I could make sure they weren't feed-trained, in the hopes that the larger bass ate 80% of the bluegill and redear.  That would leave me with 100 that survived, and those 100 would eventually all grow to over two pounds, and some of them would reach three if I were using a high-protein, high-fishmeal food.

DON'T stock feed-trained bass as they do a terrible job controlling bluegill - they prefer to eat the easy-to-get pellets rather than chasing bluegill.

As far as food goes, there are a couple brands that are better than Aquamax but they're much more difficult to get as they're not sold in retail stores.  Skretting makes a very good food, but their prices have gone through the roof since they bought out Silver Cup; the food I use now is Melick out of Pennsylvania.  They have a 45% protein food that's specifically formulated for growing big bluegill, the only such food in the country.  But you would need to buy several bags at a time to make the shipping cost per bag not as much, and even then you'd be paying significantly more than you would for Aquamax, though it's a significantly better food.

But even feeding Aquamax rather than a catfish chow, or Purina's gamefish chow, will make a drastic difference in how big your bluegill get.

But: by far the most important factor in growing big bluegill is achieving a low density of them in the pond.  If they get overcrowded, you can feed until you're blue in the face and they'll never get much beyond 9".

Well Monty if I can be of any assistance please ask. As far as the pond is concerned I think you might be better served talking with Tony or Walt they will be your best bet and love to help out. Tony and Walt are very much evolved with the pond process. I would say if you stocking catfish you might want to think twice or go with a low number. Good luck and GOOD FISHIN....

Welcome Monty to Big Bluegill. I am also a member of Big Bluegill wanting to welcome you and to share some of what goes on here at the site. This is a site with loads of information where we can learn and enjoy in what we like doing best, fishing. In this site we have loads of information we can feed off of and share and learn and having a good time doing so. We have FORUMS, BLOGS, CHAT ROOM, SPECIAL GROUPS, VIDEO'S, and the best PHOTO'S you can find anywhere on the internet. Feel free to jump in and investigate the site it is loaded with information and above all don't be afraid to participate we are all still in the learning process and improving and honing our skills making us better fishermen/fisherwoman and enjoying it all throughout the process.

We are all about Bluegill, Big Bluegills ( Bluegills, Sunfishes, Red Ears, Brim family) but not to stop there you will read about many different species of fish even some you may not have known even existed in the Blue Gill world and forums with many picture to share, but our main goal is catching that ultimate giant Gill so we can meet that special goal and maybe some braggin rights along the way. Its just a good well rounded site with loads of information with good people a family atmosphere who don't mind sharing, we have loads of fun doing so which you will see.

"Enjoy Mikey-D…..real tasty recipe, crappie are so good, just kicks it up a…"
Thursday

Jeffrey D. Abney replied to Frank M's discussion Never saw a fish with this deformity!
"Always cool to see the survivors…..I agree with Bruce….could have been a bird of prey…"
Thursday

Bruce Tomaselli replied to Frank M's discussion Never saw a fish with this deformity!
"I bet  a bird, heron, kingfisher, etc. took a swipe at it."
Thursday

"Thanks John…..I thank my family for teaching me so many cultural enjoyments when it comes to…"
Oct 7

Jeffrey D. Abney commented on John Sheehan's group Piscatorial Pursuit of Perch
"Thanks, I personally love the period between 70 to 60 in the Fall as well as Spring 60 to…"
Oct 7