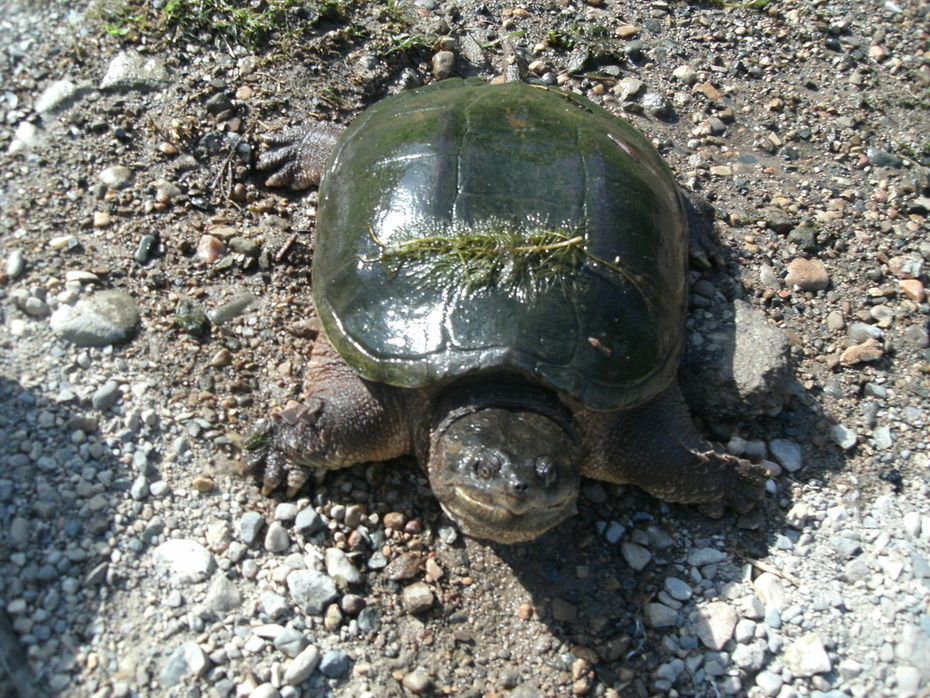 Plenty of monsters in the local river system I fish. Have caught a few while bottom fishing rotten meat for catfish. Was fishing the local river for trout last year when a water rat was crossing the river and a snapping turtle shot its face, head, and mouth like a bullet to grab the rat!

Hm..surprise you didn't turn it into turtle soup, or kabob. Mmmmm...

Drag them up onto the bank.  Flip them over with a stick.  Pin the turtle on it's back with your foot.  Using a long de-hooking tool, remove the hook.  Flip the thing upright and let it go.

Of course, there were a few turtles that I've caught over the years that got released with the hook still in them.  They just did NOT want my forceps anywhere near their mouth.

Now, something like that, I'd deal with one of two ways:

CAUGHT & RELEASED THIS TURTLE THIS WEEK. HE HAD A VERY BAD ATTITUDE. LIKES EATING CREEK CHUBS. TRIED TO USE HIS CLAWS TO GET OFF BUT I HAD A STEEL LEADER & A 4/0 OCTOPUS HOOK. WHAT IS THE CORRECT METHOD FOR LANDING A TURTLE? I LIKE MY FINGERS.

Kelly Peterson replied to Leo Nguyen's discussion A family's loss
"So sorry for you, Carl and your Family. God Bless and continued Prayers."
2 hours ago

"Thanks Tooty  sometimes this a real Honey hole and holds many species."
3 hours ago

"I wish you well, we just got back from a vacation in the smoky mountains and got chased home by a…"
20 hours ago

"Thanks Kelly, I normally tip with grass shrimp or live crickets, but caught several on naked casts…"
20 hours ago

"THANKS JEFFREY AND JOHN , THAT REALLY MEANS SOMETHING TO ME BUDDY'S......"
20 hours ago

"THANKS JEFFREY & JOHN , I'M GOING TOMORROW TO SAME PLACE AND MAYBE  I'LL HAVE…"
20 hours ago

"Thanks Kelly, just got back from family vacation in the Smoky Mountains!"
20 hours ago

"Very nice stringer, I like the average in this mess, nice Tooty"
20 hours ago

"These are quality gills in my book, very nice Tooty,"
20 hours ago

"Awesome Chain pick John, you guys have been on them."
20 hours ago

"I have missed these pictures for quite some time, hope this finds you well Slip!"
20 hours ago

Jeffrey D. Abney replied to Leo Nguyen's discussion A family's loss
"Thanks Leo, my heart has been hurting for Carl since he sent me a message with the terrible news…"
20 hours ago

Bruce Tomaselli replied to Leo Nguyen's discussion A family's loss
"I feel so bad for your heartbreaking loss. I will certainly keep you all in my prayers."
yesterday

Hi everyone,I know this is a website full of info about the love, gains, and tall tales/tails of…See More
yesterday
5 Comments

"Good to see you back on here. I miss reading what you add to this site."
yesterday