Want To Tie Flies? Where do I start?

Here is a good video to watch...

By request an introduction to fly tying materials & tools, For the newbie. I hope i help a few understand better.

That is a very good video, but in my opinion, too complicated for a beginner. Try these. Learn the basics and you can tie anything. I hope this helps you. I know of what I speak because I teach lessons. I don't know everything, that's for sure, but I've tied for over 20 years and I do know what basics you need. And, remember, even the most poorly tied flies will catch fish. I'm proof of that.

Good job - Bruce and thanks for adding the links, I'm sure  their are beginners and others out there that willl be interested in them........ maybe you could post a video of you tying some flies.

I started my tying with a kit and the basic book that was in it!!!!!!! Then my neighbor turned me on to these GUYS!!!!!!

That was before internet, as for me anyway Ihave most of these recorded on vhs!!!!!!

Great site Greg- spent so much time watching the episodes I almost forgot to post.......thanks Rick

Well I started my tying at a shop in Rockford Illinois called ON THE FLY. Guy showed me how to do a half hitch and tie a foam spider. I had gone to his shop to buy some fly tackle , a reel etc. , and wound up learning how to tie flies. We started out simple and after a month I had paid for my first Regal VIce AND then on to Royal Coachman's ,Royal Wulff's , Mosquitos', SCuds, and assorted other trout patterns. Should have stuck maily to panfish stuff, but was young then, In my 30's, and eager to try some new stuff. Well I never did watch a video till about 10 years later and it was by Dave Whitlock , WHO IN NEAR FORGOTTEN NOW , and he was a real fisherman and tier. Also watched a video made by Larry Dahlberg on how to tie the Dahlberg Diver with deer hair. Only tried one of those!!!!!!!!!! SPinning deer hair isn't my idea of fun!!!!! OVer the years we all seem to progress till it looses it luster and becomes a job instead of fun. It has become a job for me and when I was down in the shop today with my son, I had to do some soul searching to see if I still wanted to make the 600-1000 bugs a winter which I normally do. NNNNNNNNNNNNNNNNNNNNNNNNNNNNNNNNNNNNNNNNOPE THE PARTY'S OVER FOR ME AND ON TO SOMETHING I REALLY LIKE, TYING EXPERIMENTALS FOR FUN!  I have one guy to tie for besides my self and family and resides in North Carolina! Got my own stuff to do and his and family. That's about it except for a few friends on here , BASICALLY ANYONE ON HERE WHO NEEDS SOMETHING.

I TOOK THE WONDERMENT AND FUN out of my hobby and turned it into a job.Big mistake that anyone can make if you need a buck or just like the thrills of someone coming to you and saying I didn't believe what you told me Tooty till I saw it . THAT WAS THE MOST REWARDING PART OF TYING FOR ME .

RICK YOU ARE RIGHT in your assumption that I have enough materials now to take me to the end. You can have all the supplies I told you about today . 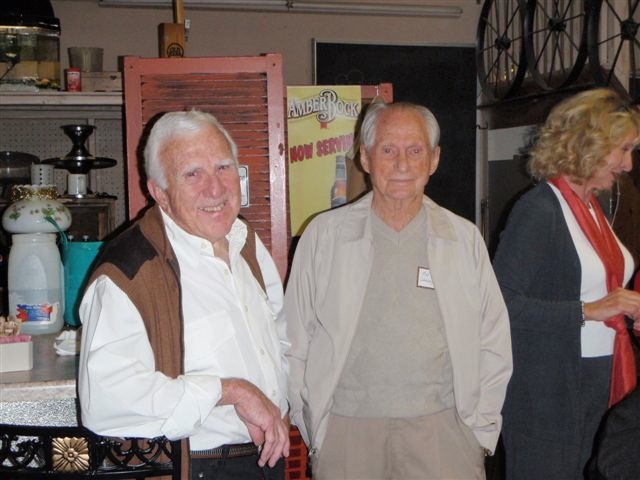 David, Dave Whitlock is still alive and well this is a picture of him at the Christmas party a couple of weeks ago!!!!!

He and the fellow standing next to started the fly fishing club in Oklahoma in 1968!!!!! He pushes his art work these days but still manages to fish a little!!!!! He now lives in S.E. OKLAHOMA!!!! Thought you would like to know HE IS ALIVE AND KICKING!!!!!!!

THANKS VERY MUCH FOR THE PIC and he always struck me as a true Gentleman on his video's I used to enjoy watching years ago. Never knew were he was from and you are lucky to be able to have seen him in person buddy!!!!!!!! Young folks on here have never heard of him I'm sure , or GADDABOUT GADDIS , for that matter . I believe Mr' Gaddis is alive and kicking still also.

thanks greg,dave is the one who got me into tying as i  chose one of his books at random when looking for a place to start.read every thing i could find by him.this was as tooty said way pre internet,i became a flyfisherman and tyer not cause i had some yearning to flyfish,but because i could not catch those darn fish feeding on bugs off the surface.they were big spooky gills in strip mines that the regular methods just would not work.no fly tying clubs or anything near me so i bought some books and taught myself.met dave or rather shook his hand a couple times at shows but i feel like i know him.

YOU GUYS ARE BOTH LUCKY TO HAVE MET A LEGEND LIKE DAVE Whitlock and I gotta get out of TROY GROVE MORE!!!!!!!!!!

THanks for the u-tube links. I am just getting into this and it is very interesting. I too turned a passion into a job once [ bow hunting] . I learned a big lesson there. Havnt bow hunted for 10 plus years due to burn out. Won't make that mistake again. Again thanks for the links.