The Dragonfly / Damselfly nymph bite is on!!!!

I stopped off at the pond at work today.  I started off with a popper, and caught a Hybrid sunnie, a Bluegill or two, and missed at least one fish.  Decided to switch over to a "Flicted Damselfly" pattern I found a couple months ago.  It's an extended body nymph tied with marabou, and bead-chain eyes.

The fish went wild over it!  I actually saw at least one wake of a fish rushing in to eat this bug.  I caught a couple more big Hybrid Sunnies, and several Bluegill, with several missed fish or fish that came unbuttoned.  They were absolutely INHALING this bug.  I had to get my forceps out to remove the fly several times.  When the Hybrid sunnies would hit, I actually thought I had a LMB, from the pressure that was being exerted on my 8wt!

I didn't get any pics of the fish.  I need to tie up a few more of these flies.  When I did my initial tie of this pattern, I only did three, and have since lost two to the weeds and brush.

I made a few foam type dragon fly for a friend to hunt bass for top actions. I'll take a few photos later. You can also shrink it down to #6 size hooks, or even as small as #14. Since I don't have all the material, the wings are not as..well..pretty..deadly nonetheless with the fly or spinner gear.

Here is a basic tye with limited materials and spare foam, on a 4/0 hook to entice bass. A hot magnet. Stand up to about 20 battles of tug o war before a new fly has to be replaced. The foam tail cant handle those rows of teeth. 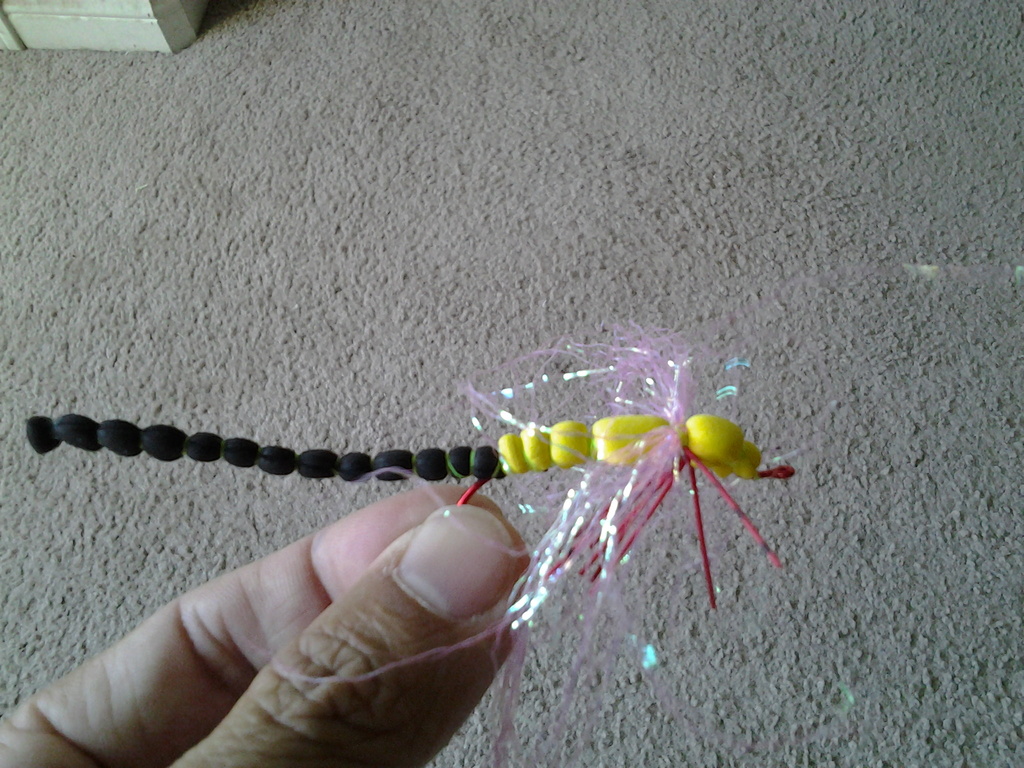 I know there's times down here that they'll get so focused on a dragonfly hatch they'll bite nothing else, they can even get picky about color of your dragonfly.

Sounds like a great time !!I'm anxious to see the fly you used also! Eyes:  black bead chain, tied on top of the hook

Tail:  Marabou, tied as an extended body, loosely spiraling the thread to near the tips, then spiral it back.  Tie this on a needle mounted in the vice, and finish the tail with half-hitches, then slide the tail off the needle

Body:  Leftover marabou from the tail, twisted into a rope, and wound around the hook, around the eyes, tied off just behind the eyes

Start it off like mentioned, by making the tail first, on a needle mounted in the vise.  Use the whole marabou feather to make the fly, and capture marabou on the needle about half an inch from the tip.  Wind the thread loosely from the tie-in point to about 1/4" from the tip, wrap around the marabou a couple times, then loosely wind the thread back to the tie-in.  Tie a few half-hitches and cut the thread.

Once the tail is made, and removed from the needle (I usually make several tails at once), it's time to start the fly itself.  Mount the fly in the vise.  Start the thread just past the eye.  I like to build up two thread bumps, then attach the bead chain between them, using figure-eight loops.  Advance the thread to the bend of the hook.  I like to use a little Sally Hansen's to secure the thread wraps around the bead chain.

At this point, flip the hook upside-down in the vise.  Cut some Pheasant tail fibers from the feather, and secure to the underside of the hook (now on top) like a PT nymph.  Form the head, whip finish, coat with Sally, and let it dry for a minute.

I tie this fly like this, with the wing case on the underside, because with the down-eye of the hook, and the bead chain on top, the hook will flip over in the water.  Once this happens, it will swim like a normal bug, but with the hook point up, making it somewhat weedless.

I don't add extra weight to the fly.  From what I've read, damselfly nymphs swim within inches of the surface.  A slow, stripping retrieve will be perfect.  Judging from the hits I was getting today, it works.

Thanks.  It was deadly today!  Once I got the hang of tying the extended body, it was a fairly quick tie.  I did three tonight.  I may tie some more tomorrow; my normal "batch size" is at least 6 flies.

How do get a strong connection between the tail and body?

Jeffrey D. Abney replied to Bruce Tomaselli's discussion Happy Thanksgiving
"Thanks Bruce….hope yours was great as well…."
5 hours ago

"Slab alert John!……I’m a little behind for a family vacation to the Gulf Coast…"
5 hours ago

I wish you all a great Thanksgiving Day.See More
Thursday
2 Comments