Gonna stick my neck out here...yes, the boat you use matters

Many of you are kayakers and I have already commented on that, and to each his own, if you like kayaks, use them. They aint for me, but whatever works for you WORKS. Keep on.

That said, I have to admit that being in a 12 foot flat with a 1.75 gamefisher (EXCELLENT motor), I find myself quite limited.

The first time I saw that pro bass dude with the LOWE bass boat, big boat, fancy, etc. big motor, fancy trolling motor. He was a pro, and he handled the boat like a pro, moving in and out of coves, had his depth finder working for him... he caught 10 bass on a day most people didnt catch one.

Other guy in a pirogue (pee-row) went up and down and came back and caught nothing at all. Another guy in a small flat caught notbhing. Some dude came out there in this plastic row-boat looking thing..not much bigger than a bath tubb None of them caught anything.

We all gathered at the boat launch, mad that the pro guy was flying up and down the bayou without regard for us. Actually one of the guys was going to pound him if he came back.

We were talking and the guy with the flat said, "They got an advantage because they can move in and out, they can go miles and miles away and come back. we cant do that."

The trolling motor he had was really an expensive looking unit. The cop said the guy was sponsored and owned none of what we saw.

Yesterday after work, I was able to go out for a short time in Manchac. Some Creole guy was out there with a nice bass boat. I seen him before and he is always really good about respecting other boats. He is a good guy and friendly, too.

He was standing up on the front of his boat, had a purple worm, weighted, and he was catching fish. Most others that we saw didnt do too well.

I personally caught a striped bass, and thought, WHAT's THIS???? I never catch them over there.

anyway, I was watching him and I think, i really THINK that the fact that he is working that worm, some 6 feet higher off the water than I am is having an effect on his ability to catch fish The worm rises up higher in the water, while mine, even with a 6'6" rod, barely comes off the bottom when I lift

Any yall ever think about this? Standing up, having more actual bait travel than sitting down in a flatboat.

Permalink Reply by arthur cole on February 6, 2012 at 6:07am
Dick all the lakes I fish are ele only. There are a few lakes with gas but maybe I will ask John to sell me his ! It has been in his garage for years.

Still need to try that Yamaha 9.9 on my 14' Grummann at the Monksville. How do you think that would work out ?Gotta go to Greenwood Lake Marina and get a small gas tank and some hoses .I got the muffs and need to hook up a hose when its warmer and see /hear how she's running .

Permalink Reply by arthur cole on February 16, 2012 at 6:00am
John sorry I just seen this .I think you have a long shaft you might need a short 15' shaft on that boat .I am all set up with a new 9.9 From Greenwood Lake Marina .She gave me a good deal. I will be set to go for the Walleye's come Spring time at M-vill.Maybe hit G-WOOD TO .Get that motor out and lets starte it up .Should I call before stopping by :-)))

Merc great !I had a 25 hp Merc that was a great motor .Sold it with my Sea Nymph Pike Attacker boat in the mid 90's guess it was .

Permalink Reply by arthur cole on February 16, 2012 at 1:56pm
Ya that would be nice my Tracker can take up to a 25 but with M-vill it would not work out .I would love to hit Round Valley now for some nice Browns. I might sing up for the water shed this year .

I have a 17.5 ft Sea-Ach set up for crappie fishing with two live wells and a ciculating baitwell. It has a 75 hp mecury and all the buttons and wistles. Last year I purchased a smaller 15 ft Alumicraft boat from Academy Sports, added a 52lb tiller trolling motor on back and a trolling motor mount for the front, added nice seats and one of those swamp people covers we made for hot summer days and well. I used my big river boat probably 4 times last season and the little 15 footer probably 100 times. I guess a person needs to figure where he will be most of his or her time and bump that against the cost of which boat is the best for them. It will just about cost me about $60 bucks on average to take out my big rig where as I can go several times on the same money in the smaller aluminum rig with just electric power....

I have a 15 ft Duracraft with a 48 inch bottom which I am going to have to redo the front this spring, I just added a bow mount hand control troll motor. That means I'm going to have to add an elevated seat on the bow,  I guess 'l 'll look like a bass fisherman I dont like the name troll motor because I dont troll with it, I prefer to call it a electric boat positioning motor because thats what I do with it .

I'm lucky enought to have a certified Mercury mechanic as a fishing buddy so my 35 hp motor stays in top shape. We are getting ready to put a new water pump in my 15  hp. tiller  control  that I use on my Duracraft 14 ft jon boat. This is the boat I use in smaller waters and on small rivers before they get to shallow in the summer. Finally when the river get too shallow I use my 16 ft flat back abs plastic canoe , with a 3hp gas motor or an electric troll motor on the back. A canoe with an electric is lots of fun , you can get instant thrust  when you need it instead of having to pull a crank rope to start a motor. I'm adding a photo of fishing out of my jon boat  showing another buddy what we were susposed to be catching. Hope you like it.  LOFR 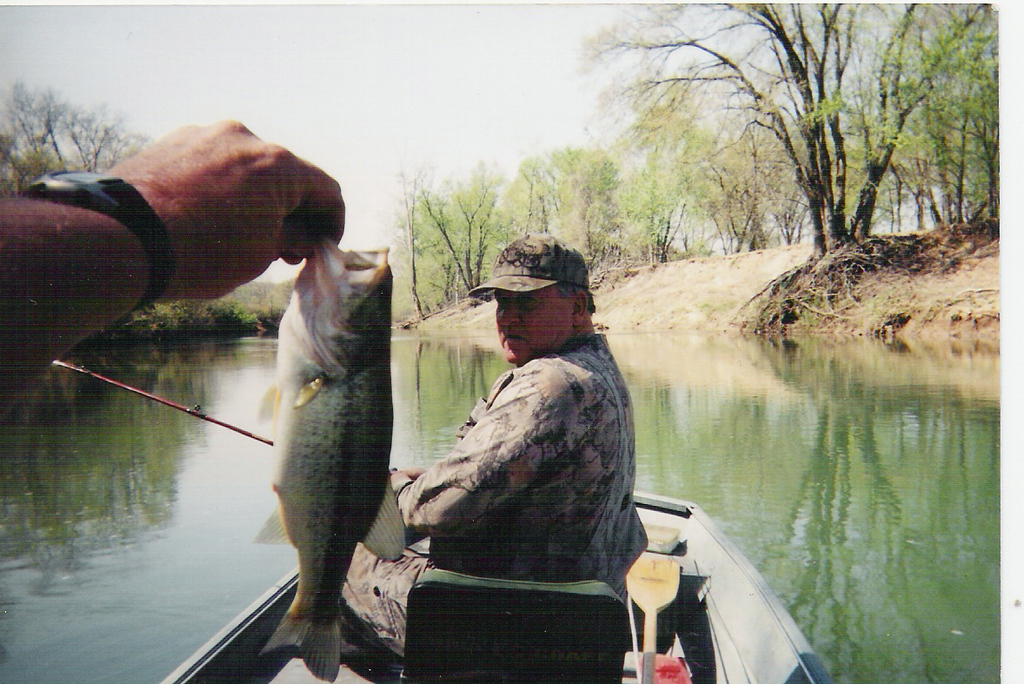 Nice rig.....my father and I fished for years out of a similar rig and we had a great time and could go almost anywhere.....

In my research into getting something a bit larger than my float tube (leaning toward a canoe + electric, but decision not yet made) I've seen there are often a lot of pretty reasonably priced 12-14 foot boats with trailers and sometimes motors and more or Craigslist.  I imagine the boats and trailers are all older models (doesn't bother me as long as they are sound) and the motors are probably older 2-stroke (doesn't float my boat, so to speak; when fishing, I'd like to keep my hands well away from mixing oil and gasoline, and there are some waters in California where older 2-strokes are not allowed, and probably some where no 2-strokes are allowed).

These used boats make throwing a tow package on my Odyssey and getting a used boat a possible option. However, I've never owned a boat before and don't know anything about distinguishing between a crummy used boat that's going to go all Titanic on me the first time I take it out, and a good one. Boat owners, what say ye? What should I look for? Or should I just look for a brand new boat? :-)

Why a brand new boat for starting out? You better have a nice BBG saving account set aside where the woman didn't see it ;-) New boat is good, but a used boat with everything you need is better. Like you said, plenty of deal on Craigslist in the local area. Odyssey will be able to haul anything without cooling system and fluid as long as it's less than 1500lbs..not on a regular basis of course.