THANKS for this link Sharon!!

Anyone ever try using this site for fishing forcast?

I tried it the last 4 days when it said my fishing would be excellent, and I caught my first bass the first day.

Center-pin, spooled (non level wind) reels were made for a long time, John. They were known as far back as the 1700's. They were "direct drive," initially, the handle being attached directly to the spool's center shaft. They and the fly reel share a common background.

Then in the early 1800's, the multiplier reel (geared) came on the scene and soon became the standard. However, there was a "fly in the ointment," as it were. Fishing reels back then were made by jewelers and watch makers, and were essentially hand crafted artisan items. Most regular people wouldn't have been able to afford them.

(Odd to think of that, isnt it? We take for granted the inexpensive, functional fishing gear we find on store shelves today.)

As all of this suggests, the level-wind, multiplier reel came somewhat later. They were known by the mid 1800's; that is no surprise. But as far as I know it wasn't until the late 1800's that they appeared in what we think of as "production" numbers. It was the changes brought on by the Industrial Revolution that finally made them widely available. Only then was the technology available to produce their complex gears, bearings and components.

None of this should be taken to mean that basic, non-level winders totally disappeared. They remained on the scene for the less-affluent angler and were surely the stuff for kids. They are still made today, in fact, albeit in plastic for the most part.

The shakespear reel , I recieved at Christmas when I was 9 years old, the Johnson was a graduation gift, the rest I have inherited over the years, the reel without the line leveler was probally made before someone thought of line levelers. I really thought yall would like the square metal fishing rod, it would be a good lighting rod on the water     LOFR

Thanks for sharing your photo LOFR! You even know the ages!

I have a few of those old level winds and one that has no worm gear level wind .Any one know why these reels were designed without a level wind?I think you got one there on the top left LOFR

Classic stuff - got me a few of those m'self. Thanks!

Thought yall might like to see some of my old stuff,  Shakespear Wonderflyte ,Model 1795 , about 47 years old, Johnson Century ,39 years old , never been on a rod, Meadowbrook baitcaster, Ocean City #81,and a unknown baitcaster, and a True Temper square metal rod.   Look how far we have come in last  50 to 75 years.         LOFR 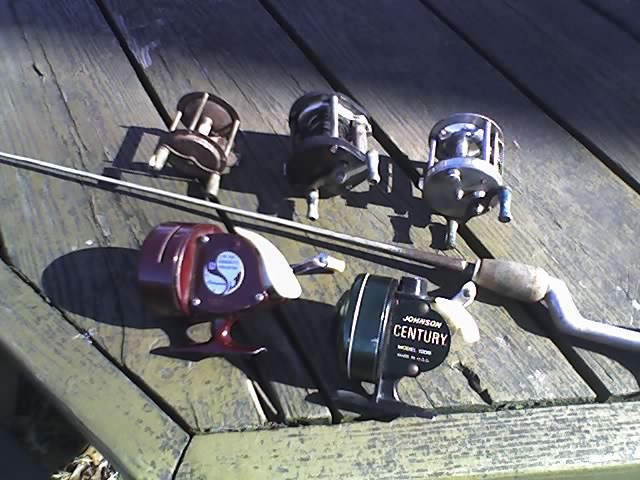 "Nice pickerel, John. Have you ever tried to eat them? I haven't yet, but I saw a a few videos…"
3 hours ago