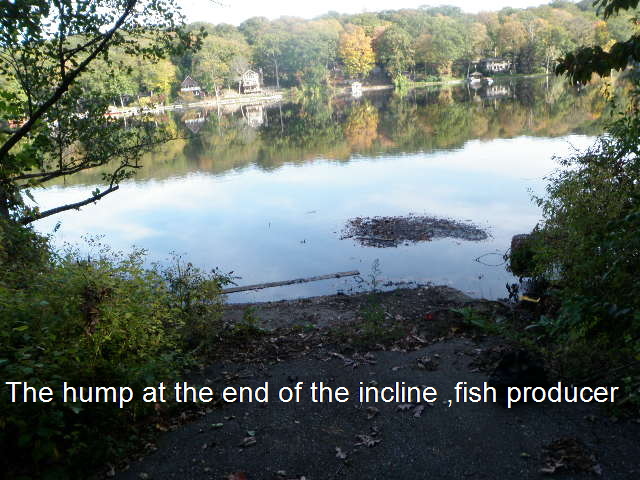 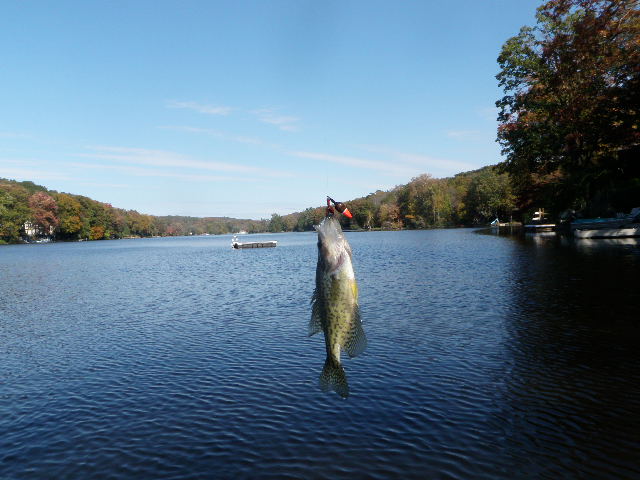 Spot #1(April-Fall): On my home lake a Bluegill hotspot is where flooding waters push sand and pebbles down a long paved incline.It's like a small boat ramp of sorts .It builds up a hump around the base which enters the lake which is where I cast from . It seems that many fish hit very close to the end of the retreive as the lure rises up the hump created through the years.I feel fish follow and commit to attacking when it enters this compression zone.Besides Gills,I have also caught Crappie ,Bass ,White and Yellow Perch at this same spot . The real good thing is the spot holds fish  Spring through Fall consistently. I always look for spots that have these humps dropping off to deeper water .I am sure they are used for spawning areas but if it's near depth that suits them can be used by fish before and after spawning season as well.The bluegill pictured in the attachments below  was caught in early October and the Bass in early March.

Hope to hear of other hotspots from members of this group!

The wading spot is a buildup flat at a spillway .I was casting out to a dropoff and
a floating dock .I had to try this spot ,wading /slip floating /distance
casting/ as a new experience due to the bank fishing group that set me in motion
. This is the first time fishing this spot like this and I learned some things: 1)
I still haven't agreed on the favored stop the tube/string version or the rubber eagle claws .Until i can satisfactorily keep the tube/string version from slipping on the line I will favor the eagle Claw rubber stops which are applied by a threading /tab method.2)When wading or bank fishing a two piece 8' pole is good for casting distance and convenient to use .3)16th oz jigs are still usable on 2 lb test and get the distance needed in this circumstance. 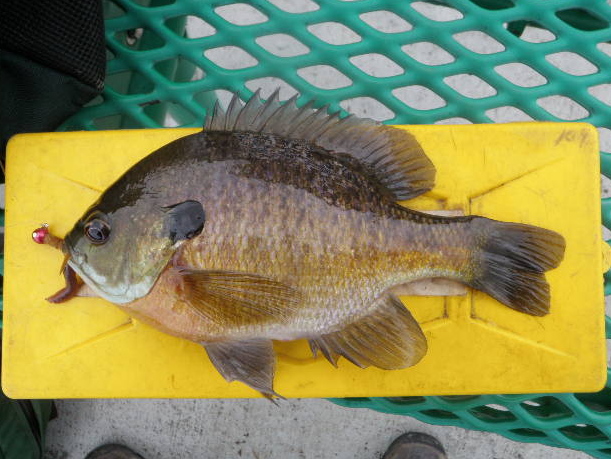 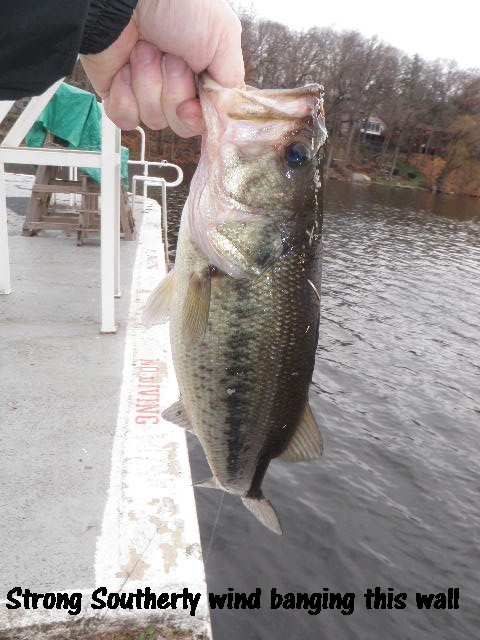 A cement wall facing the wind proved to hold fish today in Late November.(11/29/11)Fishing from shore during cold water periods I always try to find access to deep water by looking at the bank surrounding my spot. The steep banks always seem to produce .This time I went to the beach area at my home lake of Cupsaw in Ringwood NJ again.The swim club docks were my casting platform and I took a few Yellow perch and Gills.When the warm Southerly wind really picked up I went to the diving area where the cement wall faced directly into the wind .I just knew the fish would be waiting there.It was like ice fishing by the wall. I didnt need to cast ,just frop the jig down and they were waiting right in front of me  about 5&1/2' down! Only one LMBass but it was a strong 14" er.One fine Male Gill and a nice PSXBG hybrid.All the others were Female Gills.Lots of Yellow Perch

Bank Spot #4 is an ice out March/ April killer for Yellow Perch and Bluegill and less so for Bass and Crappie . The warm flows from the inlet pipe turn fish on and they often stage at the end of the flow.Casting distance depends on water flow .The pipe is coming from sump pumps in back of the homes that are in line with it .My house is up the hill from here. Sometimes when Fire hydrants are flushed the flow is great! When the hydrants are flushed in March or April after some warm weather I want to be here . I often catch bass Crappie and Gills off to the side of the flow but Yellow  Perch congregate at the end or inside on the bottom of the flow . Food and debris comes out of this pipe and like spot #1 a buildup creates a hump and a good ambush point nearby.This spot is usually dead during the summer but Gills,Yellow and White Perch show up around labor day or shortly after and can be caught on 32nd oz. Beetle spins . 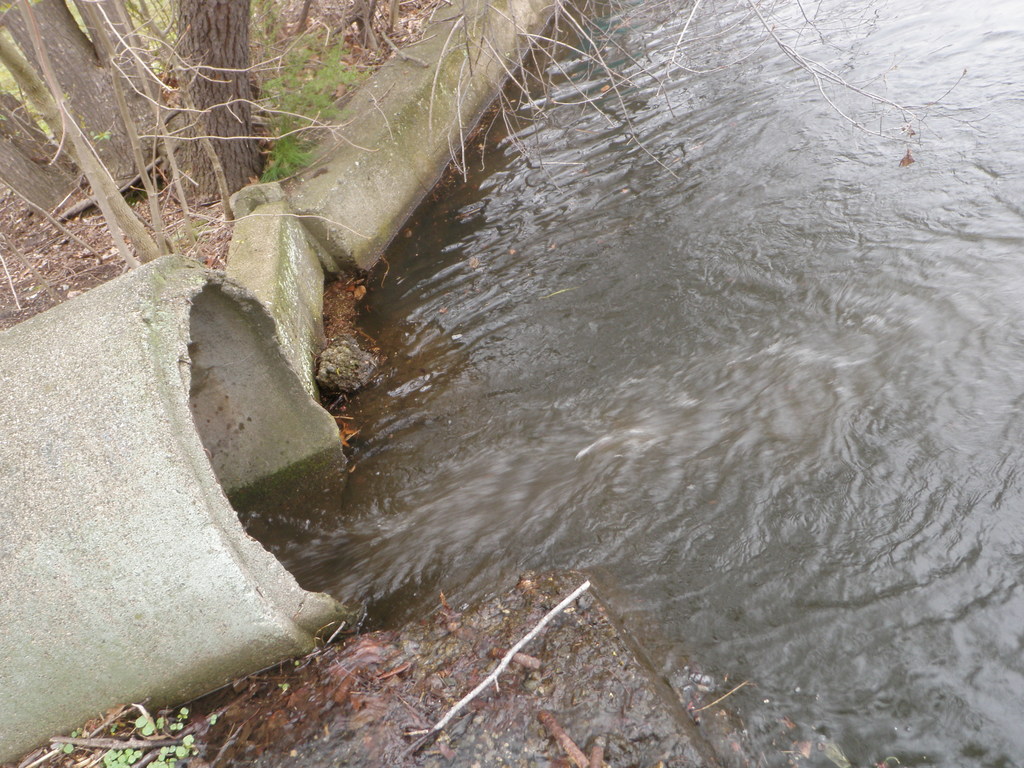 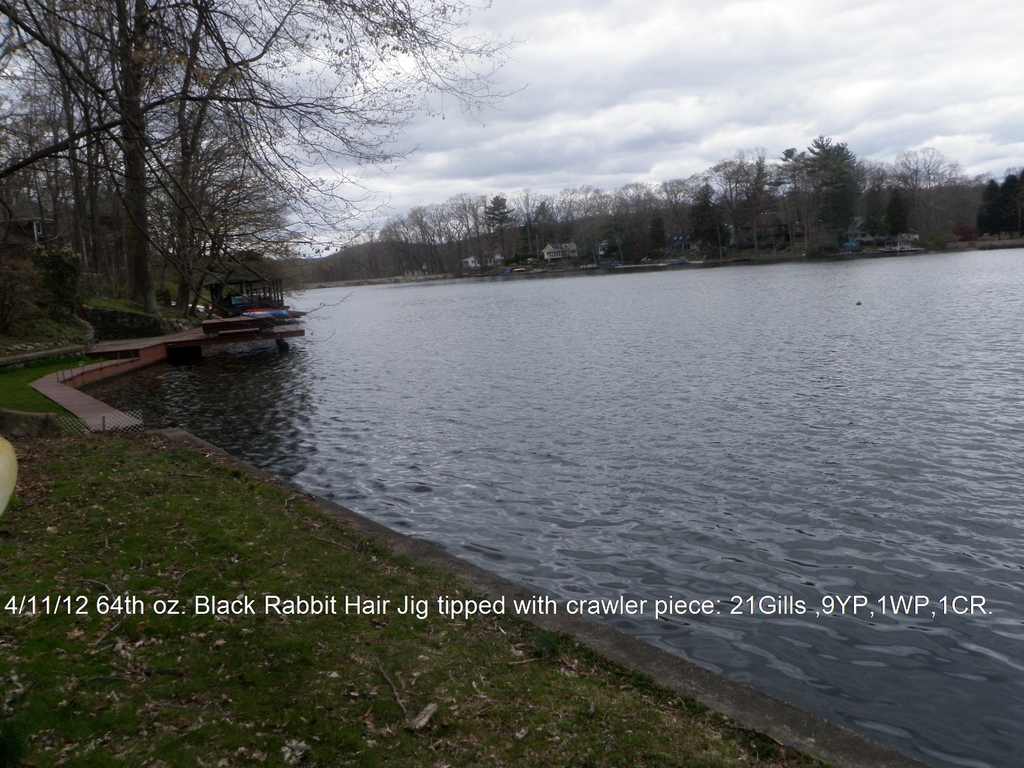 Hit this windblown spot from an anchored  boat but the fish could have been caught from shore here I believe. Gills and White Perch hit floated jig/worm pieces and Jig'n'spins.Wind against the wall again!

I am realizing more and more how aggressive Bluegills ,both Male and Female ,and White Perch can be over other pannies like Crappie,Yellow Perch and Largemouth Bass .Last evening proved it again!

That's very interesting. Like you, I'm sure it represents an anomaly to the fish, something unusual in what might otherwise be a featureless habitat. I liked the way you described their committing to the bite once the "hump" is reached. Ill be on the lookout for such things.

This reminds me of an area at my local lake, a section of the bank that is really just piled rocks - a steep erosion control embankment. I don't really know what is beneath the surface farther out that might be attractive to the fish - only probing along the bank will tell me if the fish are cruising near it. The rocks enter the water and about 2 feet in abruptly end, dropping off to a sloping bottom that, as far as I know, is rather featureless.

But at the far end it stops abruptly and turns sharply into the point where the base pool of the dam starts. This is in about 15 feet of deep water at the foot of the damn. That spot might hold some fish....

David_I would think that spot would be a good ambush point but I'd watch out for snags and use cheaper plastic baits until you got the layout memorized!

At the spot I was talking about it 's nice that I never lost a lure to a snag there .I've caught fish dragging  tube jigs  ,wrist snapping  spoons,slow rolling Beetle spins cranking hard baits and slip floating jigs or baits. Because its mostly sand and pepples with some sticks from tree brances ,no bad snags. The fish are relating,I believe ,to the hump and surrounding dock structure .It's a feeding zone!

Permalink Reply by John Sheehan on October 10, 2011 at 10:20am
I like fishin rip rap from shore parallel to the bank .I cover more water and lose less lures than reeling directly back across the rocks .I reel and stop floating crankbaits and wrist snap small spoons in the upper column of water and catch bass and other fish that way.

Thanks John and David, very intresting...I think a know of a couple spots like this I will try.

At a pond I fish alot, the are tall reeds,infront of a stainless steel grate at the spillway. I have lota of luck there.

Permalink Reply by John Sheehan on October 10, 2011 at 11:35am
Thank you David for starting this group! That rip rap spot I was talking about has two spillways at each end.

Permalink Reply by John Sheehan on October 13, 2011 at 2:19pm
Cover near a spillway is a hotspot for sure .An ambush spot where fish can watch the food flow.Do you have success all seasons or just certain ones?There are hot spots in the NW side of my lake that are killer early in the year after ice out but turn off in late spring thru  summer into fall . I will test to see if it turns on again before ice comes to New Jersey.I dont think so however but  in a boat you can get out to the mid lake near there and catch fish on the flats near the creek channel.

Permalink Reply by Dwayne Denison on October 13, 2011 at 4:33pm
John, I have luck at this spot as long as water temp is around 55 or above. It seems if temp drops below that, they move to deeper water. Also if water gets to hot they move away from spot.

Permalink Reply by John Sheehan on October 10, 2011 at 2:12pm
Pics of the spot #1  : http://bigbluegill.com/photo/albums/fall-shore-fishing

Permalink Reply by Dwayne Denison on October 18, 2011 at 4:08pm
Thanks for the great info John, I have been checking nearby lakes for spots, like this.