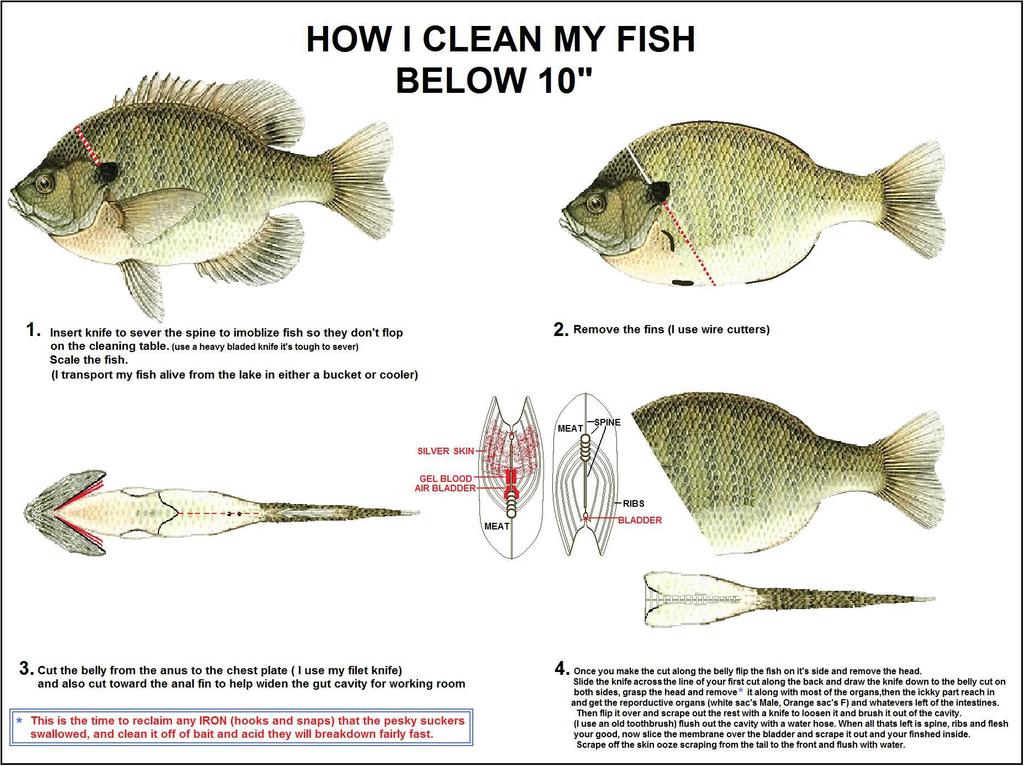 Permalink Reply by Bill "Musky" Modica on September 22, 2010 at 7:23pm
Nice...I never tried that tooth brush thing....next time for sure.
I love cooking them this way....so much flavor! 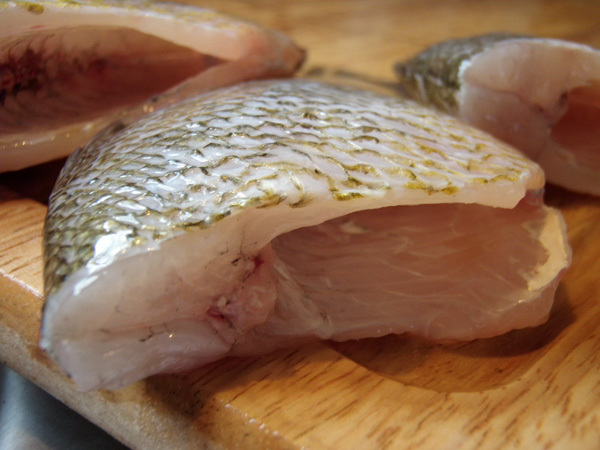 Permalink Reply by James and Kathy Acerra on September 23, 2010 at 12:16am
Dandy pic's lovely meaty goodness.
Yours in service
James and Kathy

Permalink Reply by bluegillboogieman on September 23, 2010 at 5:15am
Thanks for a very well detailed HOW TO. Great job!

I have never de-fined a gill and am curious as to why you do it. We have always fried them with the fins and just pull the dorsal fin from the rear prior to eating. The other fins never seemed to be in the way when eating. You must know something I don't. What?

Also, I picked up a scaling tool at Bass Pro that I am impressed with. It really keeps the scales from flying. Here is a link and a pic.

Permalink Reply by James and Kathy Acerra on September 23, 2010 at 5:52am
Howdy Boogie
When we used to fry the little 2" to 4" in a deep fryer at about 500° we left the fins on and ate the whole thing like a potato chip as Hors d'oeuvres the little bones fried away so the just crunched up just like the meat heavy salt fresh from the fryer.
But we found the larger fish wouldn’t so we just trimmed them off, mainly just habit I don’t find any difference in flavor, not like if you leave the silver skin on. I’ve heard they keep the ooze and can dirty up the flavor but that’s like a wife’s tale.
Thanks for the kudos
Yours in service
James and Kathy

Permalink Reply by Zach Pierce on September 23, 2010 at 6:59am
We like to leave the tail on as it is a nice crispy addition as well, just be sure not to let one go vertical in your mouth.

Does not feel too good to have a piece of one stick in your Gums.

Permalink Reply by Zach Pierce on September 23, 2010 at 7:00am
I have never tried a 2" inch fish, how did you ever clean one of those guys, it seems like if you wanted to go to the trouble these would be tasty though, and I have way to many in my pond so if you can give me some ideas I will give it a try.

Permalink Reply by James and Kathy Acerra on September 23, 2010 at 12:32pm
Howdy Zach
We just scaled and gutted them then cut the head off down to the pectrol plate just like in the above pic.
Use a finger or toothbrush to scoop out the trash and scrape the silver skin then fry the dickens out of them till crispy golden brown, if you eat the tail like a crispy treat this is just like a BG flavored chip.
Use salt, cajun, chipolte ect... to dust them fresh from the fryer so it sticks good to the damp oil set to dry and toss in a bowl for thick fish chips, yummy don't worry about the meat getting overdone the trick is not to burn them to a crisp but also fry the bones crunchy like the tail.
It took a bit of trial and error back in the day.
They used to like the old shad bake back in the Civil War http://civilwarinteractive.com/cooking/?cat=17 I've served them at Civil War events, them boys back then ate heads and all but I don't like my meal starin at me lol.
Enjoy and hope this helps.
Yours in service
James and Kathy

Permalink Reply by Dan Gwaltney on September 30, 2010 at 8:49am
Good post, James. I have done them that way and it works well, but I don't do it that way unless I have a whole bunch to clean. My normal method is really "old school", better known as "the way my Granddaddy did it." ;-)

What we do is take the head off right behind the gills, after scaling of course. Then we make a v cut to eliminate the anal vent, then split the belly up the middle and scoop the guts out, leaving all the ribs, belly meat, and fins on there. I like doing it this way because I'm a nibbler when I eat them. I like to nibble the fins and tails when they're fried up all crispy, and I like to strip off every little fragment of meat from the bones. When I get through with them, it's like a bunch of little plastic things on the plate and the cat don't even want them.

Permalink Reply by Lord of the Fly , Rods on September 30, 2010 at 3:00pm
I normally fillet all my fish with an electric knife, I've spoiled my family with no bones but I grew up eating them whole, and still like them that way. Scaleing was always the big chore untill I hooked up the electric high pressure washer. Just a little squirt and all the scales are gone. As for the fins , lateral , dorsal and tail , I remove them prior to cooking because thats the way my family always did it when I was growing up. My wife 's family always chewed on the tail and fins and said it was like potato chips,I say there is no meat on them,and they were just to lazy to remove them, yes I slept on the couch.

Permalink Reply by Magnolia Rick on September 30, 2010 at 5:17pm
I catch them and eat them. The stuff between the pond and my plate her job.

Permalink Reply by bluegillboogieman on September 30, 2010 at 5:47pm
Well if LOFR has to sleep on the couch, seems like Magnolia Rick should too!

Permalink Reply by Dan Gwaltney on September 30, 2010 at 6:46pm
I've had some pretty DanG good times on a couch, even taken some fine naps there. Yep, there's a lot to be said for a good couch!

"Thanks Troy! I was Living the Dream yesterday.........great bluegill bite with a cracker or two…"
1 hour ago

"Beautiful fish Bob! I have missed the beauties from Lake Perris this year..........hope you're…"
2 hours ago

"Five years ago today I caught this nice RBS for the Albemarle......."
2 hours ago

"That's a pretty RBS John and he attacked a huge spoon!"
2 hours ago

Caught and released this 11-inch coppernose beauty today from my float tube at Lake Perris, CA on a…
9 hours ago
1 Comment

"The RBS  are in a River minutes from my House ,I've caught them on your excellent Hard…"
Friday

"Thanks Men!Our favorite Lake is still closed due to Covid 19 .Greg and I are being forced  to…"
Friday

"Thanks Dick......I caught alot more RBS when I lived down in South Carolina thirty years…"
Friday

"Nice fish. I have never seen one up north here."
Thursday