A Red Ear is a Shell Cracker. It has a red ear but not a red throat. If you stick you pinkie in its throat you will feel a row of circular teeth in there.

A pumpkin seed has a red throat and NO red ear.

Pumpkinseeds can also have red on their opercular flaps, albeit not so pronounced as a Redear.  Seeds' are more tolerant of colder water temps than are Redears, and are sometimes referred to as "the Redear of the North"

Permalink Reply by Jason Preslar on December 17, 2012 at 7:43am
Pumpkinseeds are far brighter and a lot more vivid looking.

We dont have many pumpkinsedeeds here in South Carolina, at least not where I fish. When I was in Michigan and Minnesota they were common, though, and I've caught them. As far as appearance goes, these spunky little "sunnies" take the prize. They are, in my opinion, beautiful and the most striking of the two.

But leaving coloration aside for a moment, the primary differences have been hinted at so far. These are, in no particular order:

The Red-Ear, by far, grows larger than the pumpkinseed and, indeed is the largest of all the sunfish. Outside of special, pond raised specimens, the p-seed in the wild is fairly small. A 'Seed that even approaches a pound is considered a monster. 3/4 of a pound is a whopper in most locales. By contrast, I regularly catch red-ears that go a pound and bigger ones are not uncommon. As we've seen, the worlds record is well over FIVE pounds. The second largest one is just under that, and so on.

98% of this size disparity is genetic, of course. The two species are like apples and oranges. Theoretically they could hybridize. But, that would be unlikely. The current body of research on the red-ear says it is the LEAST likely of all the sunfish to cross-breed. So, the two are endowed by Nature to remain genetically disparate. On that basis, we should avoid too many comparisons.

As far as habitat/diet is concerned the distinctions are also clear, but the lines do blur a bit. In general, all sunfish are opportunistic in both habitat and food. This is one reason why are so successful wherever they are introduced. Now, they do *prefer* certain things, but can get along quite well on whatever their homes provide them.

The pumpkinseed is what might be called a mid-water insect eater. That is to say, shallow water "wood and weeds" are their most commonly sought habitat. For food they tend to focus on aquatic and terrestrial insects and micro-zoologic 'critters' like copepods, micro-fry and so on. In essence they lurk among the warm water weeds and logs, picking things off the plants and snapping up whatever bugs fall within reach. You can catch a lot of them with just a cane pole and some crickets.

By comparison the red-ear is a bottom dweller, and is most commonly found in water deeper than 15 feet. 30 or 40 foot depths are not uncommon, either, particularly for the larger ones. Guys in boats catch the biggest ones. The juvenile red-ear remains in the shallows, subsisting on insects and that is where the two share their diets. But once adulthood is reached, things change dramatically. Their adult red-ear feeds almost exclusively on snails, mollusks and worms which it roots up from the bottom. They have special grinding plates in the back of their throats, called 'pharyngeal plates,' with which they crush up this food. This adaptation is what gave them their colloquial name, 'shellcracker.'

More importantly, the rich diet of shellfish and such is what allows them to grow significantly bigger than all the other sunfish.

If "quality" to you means size and fighting sport, then the red-ear is the clear choice. Often called 'The Bully of the Lake," they will snatch a rod right out of the boat if you aren't careful. There is little doubt when they've taken the bait and finesse is not too often called for. I have caught them on carefully minded slip floats, but those are the exceptions not the rule. Usually they are caught using a slip sinker rig, right on the bottom. Wigglers and red worms are the preferred bait.

Nice writeup David. I would only add that P-seeds also have the pharyngeal plate, like RES.....as such, they do feed on snails and small mollusks, in addition to other items.

Thanks for that, Tony. You learn something new each day. Ive never seen much made of the pumpkinseed in this regard. However there is nothing written about the 'shellcracker' that doesn't very soon mention it.

That said, we fall back on genetics and the Wonders of Nature. Red-Ear are known to make a difference with their pharyngeal accoutrements. Chinquapin*, boy!

* chinquapin (chink-a-pin) is also a very old name for the red-ear sunfish.

No problem David. I know you enjoy reading and learning all that you can about our favorite fish, and their various cousins... here's a link that touches on RES and PS, courtesy of SDSU, and Dr. Dave Willis. It appeared in an issue of PondBoss magazine a few years back.

Thanks Tony, you know me only to well.

A lot of times when wife and I go bream (bluegill) fishing she asks if we"re going fishing for chinks (chink---a--pin).

Pumkinseeds are a treat to me and in my area. Currently There are several public lakes that have them and two lakes close to me have them that approach 1 pound in weight...absolute monsters. I have two ponds within 10 minutes of the house that have some bruisers as well, and I caught my personal best...a 10.25 incher, way back in 1983. That was a huge fish, and I have always thought of it as a 'replica worthy' catch. I may have to check Knuth or Overbaugh for the exact size.

I have caught most seeds on worms on the bottom and got into some very nice ones this past summer with some close friends at a new pond. 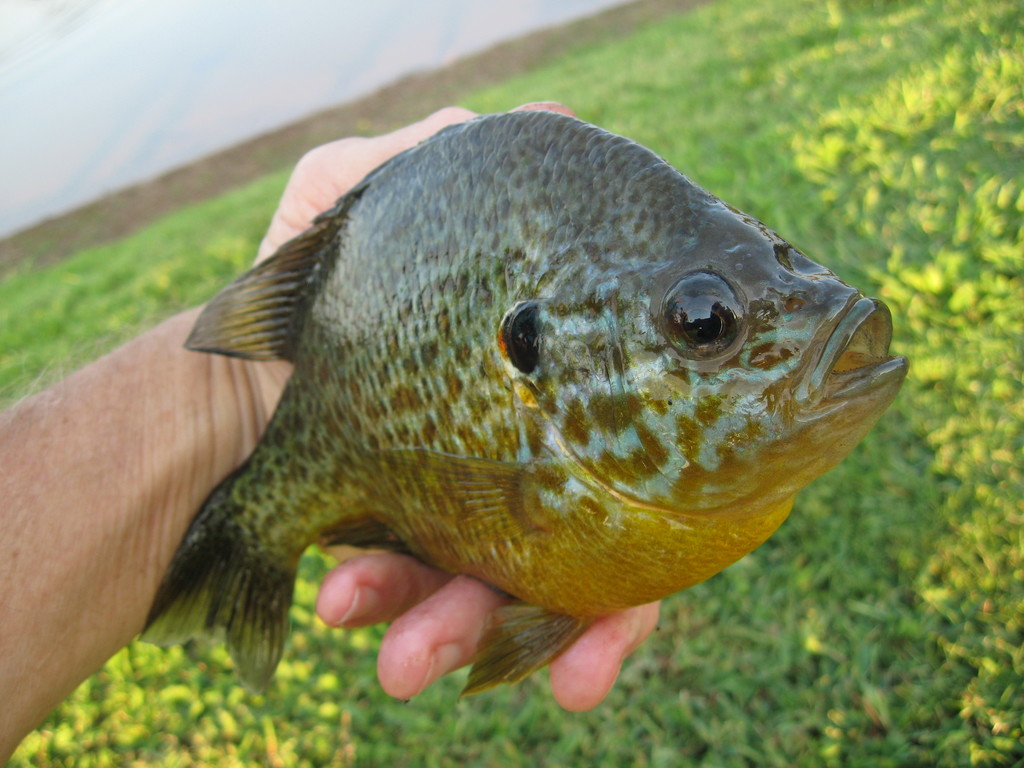 Jim, in this pic, are you just using a jig head with a chuck of nightcrawler covering the hook? Thanks...