RALEIGH, N.C. (May 30, 2008)– A last minute decision to go fishing with his mother netted a 13-year-old from Rocky Mount a new freshwater fish state record.

Travis Jackson reeled in a 4-pound, 15-ounce redear sunfish from a private pond in Edgecombe County on May 19, using a worm as bait. The fish measured 15 1/16 inches in length and 18 1/8 inches in girth.

According to Arlene Jackson, Travis’ mother, Jackson was playing with his Sony PlayStation when she talked him into going fishing with her and a friend. He agreed, and within an hour, he was reeling in “one really big bream” from a pond right down the road from his house.

“We thought it might be a bluegill or a shellcracker,” she said. “Travis was really excited when he found out it was a state record.”

They had it weighed at the Piggly Wiggly in Rocky Mount. Bill Collart, a N.C. Wildlife Resources Commission fisheries biologist, initially verified it as a redear. However, after looking at its massive size, Collart second-guessed himself and thought it might be a bluegill instead. He called Wayne Starnes, an ichthyologist with the N.C. Museum of Natural Sciences, for a second opinion.

“On further digging, into the fish literally, Starnes determined that I was right to begin with and it was indeed a shellcracker,” Collart said.“Neither one of us had seen one quite so large and physical characteristics tend to change with age as well as size.” 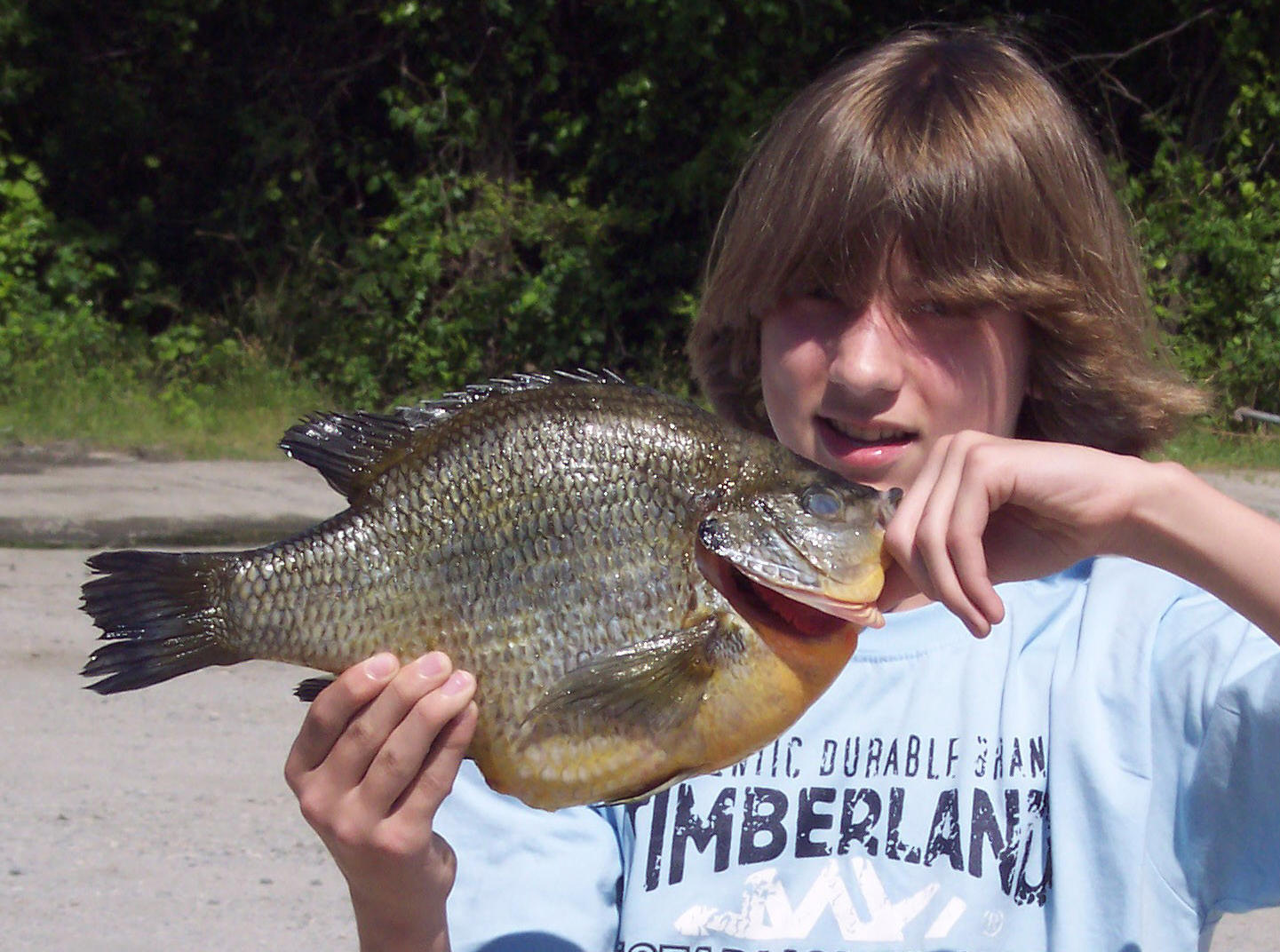 Redear sunfish, also known as “shellcrackers,” grow faster and larger than other sunfish species, often reaching 2 pounds. In areas in the central Coastal Plain, such as the Tar River from Rocky Mount to Grimesland, trophy-sized redears can be found in large numbers.

However, a nearly 5-pound redear is a rare catch, as indicated by the fact that the redear record has been standing since 1994, when Scott Miller from Rutherfordton caught a 4-pound, 9-ounce shellcracker from a farm pond in Union County. Miller’s catch tied the previous record-holder Rondal Sweet, an Alexander County angler who caught his fish from Lookout Shoals Lake in 1988.

According to Collart, redears are found throughout the state in streams, lakes and ponds and are caught easily with worms, crickets and small spinner baits.

“They tend to be deeper in the pond than bluegills, feeding on creatures living on the bottom, like small crayfish, mussels and snails, so fishermen need to get their bait deep to catch them or they’ll end up with a bluegill instead,” Collart said.

To qualify for a state record, anglers must have caught the fish on a hook and line, have the fish weighed on a certified scale witnessed by one observer, have the fish positively identified by a fisheries biologist from the Commission and submit an application with a full, side-view photo of the fish.

Mikey-D replied to Bruce Tomaselli's discussion Locating Bluegills in Summer
"I would have to agree with Jeff on his reply 110% I have seen surface temps here in Va. 85deg. have…"
20 hours ago

Jeffrey D. Abney replied to Bruce Tomaselli's discussion Locating Bluegills in Summer
"Water temperature is one of the most important factors to successful fishing……in my…"
yesterday

"Thanks Bruce, great part of fishing this region……"
yesterday