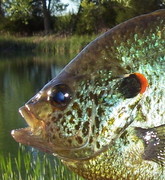 You need to be a member of The Shellcrackers to add comments!

ANYONE PREFER YELLOW AS A COLOR FOR FLYS OR BUGS ? I'VE HAD GOOD LUCK ON THIS COLOR ESPECIALLY WITH A SPLASH OF RED ADDED TO THE YELLOW BASE.......

Crickets are reportedly good for catching redear. Gulp Alive makes fake crickets.  When I need to catch some out of my forage pond I use Gulp chartruse waxies or a tiny pinch off a Gulp worm. 1/64 oz jig. Small bait and small hook does it for me.

But I know of no specific snail bait.

If you watch redear feed in an aquarium, they do not like to eat something that is not moving. I had 3" ones I was trying to feed train to eat commercial fish food. As the food dropped to the bottom they were very interested in it and sometimes would bite. But as soon as it hit the bottom they lost interest. I put some very small snails in and the redear would see movement andmgo right to the smail. They would stare at while remaining  motionless above it and strike only if the snail was moving. Some fish finally took to feed, some didn't.

slooooooow and on the bottom is how I fish for them. Often times only a foot or two from the bank if it is close to sunset. I think they come in shallow to feed where the snails are.

Don't know of any but if you want for bait they love insects and dragonfly nymphs small crayfish.

Anyone got recommendations on a good freshwater snail/clam imitation? Suggestions appreciated.

Here are some pictures of hybrid redear. They are a cross between green sunfish and redear sunfish. 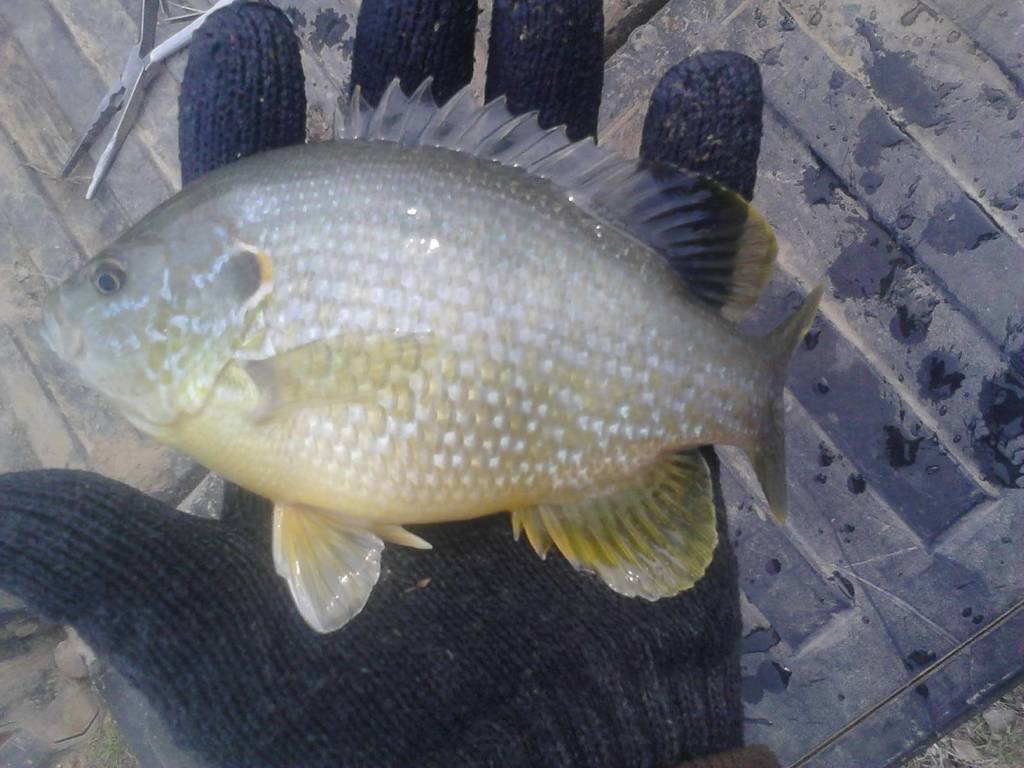 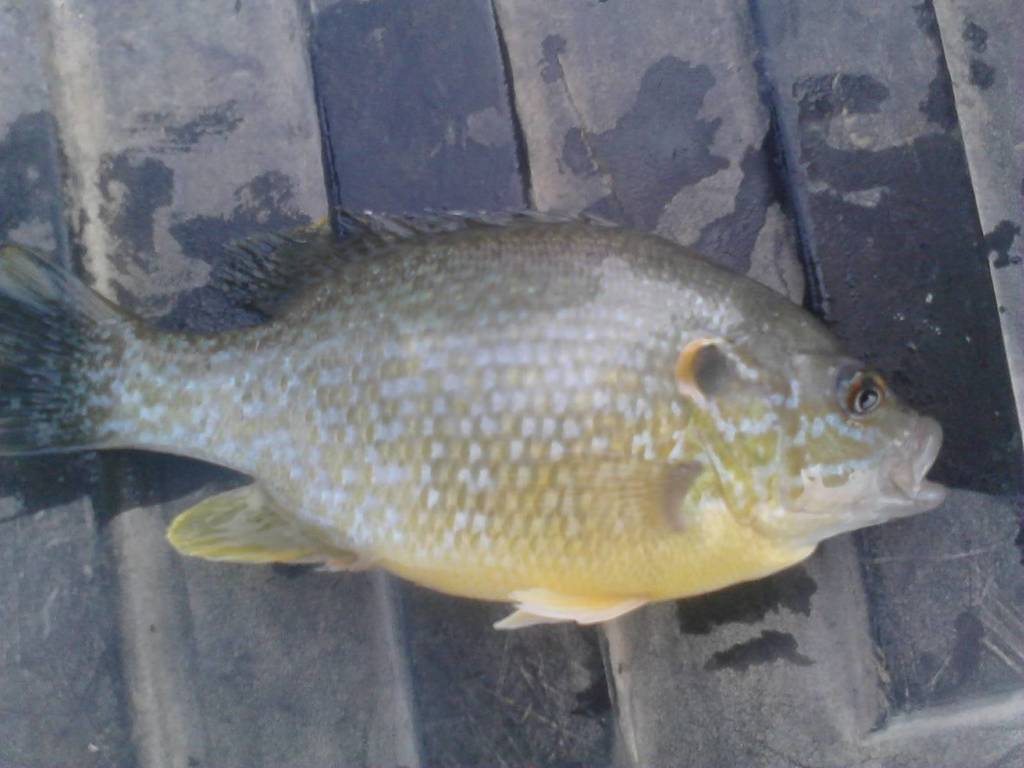 Somehow a couple green sunfish got in my redear only pond. :-(

Some from this year out of my 1/20th acre forage pond. 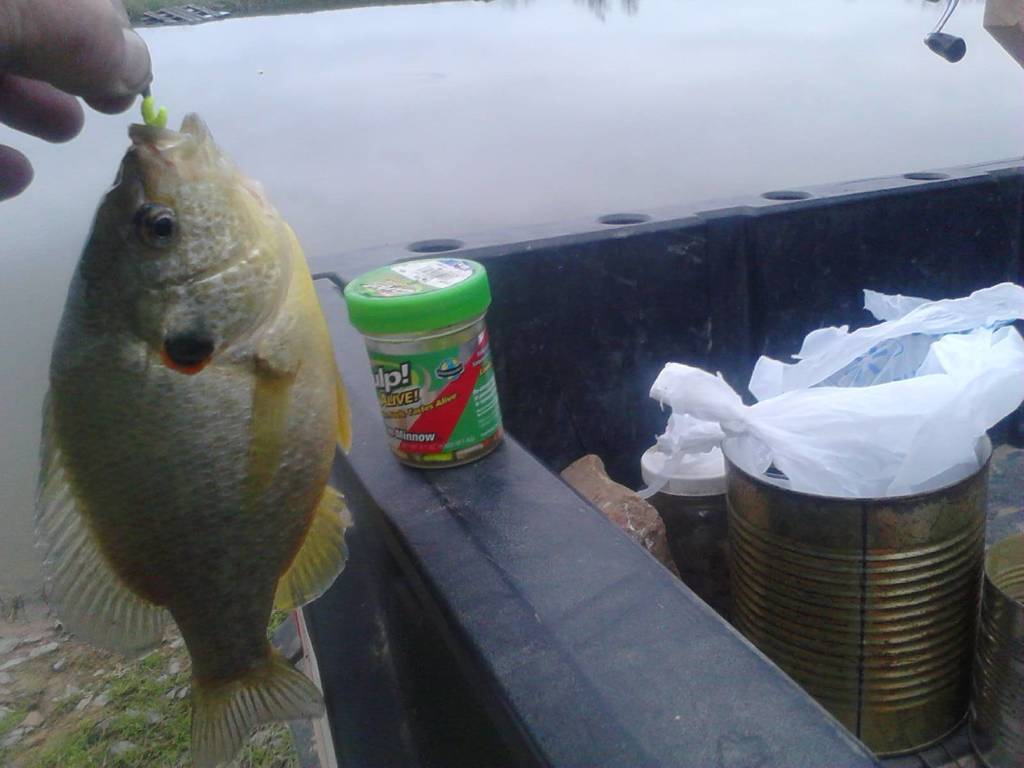 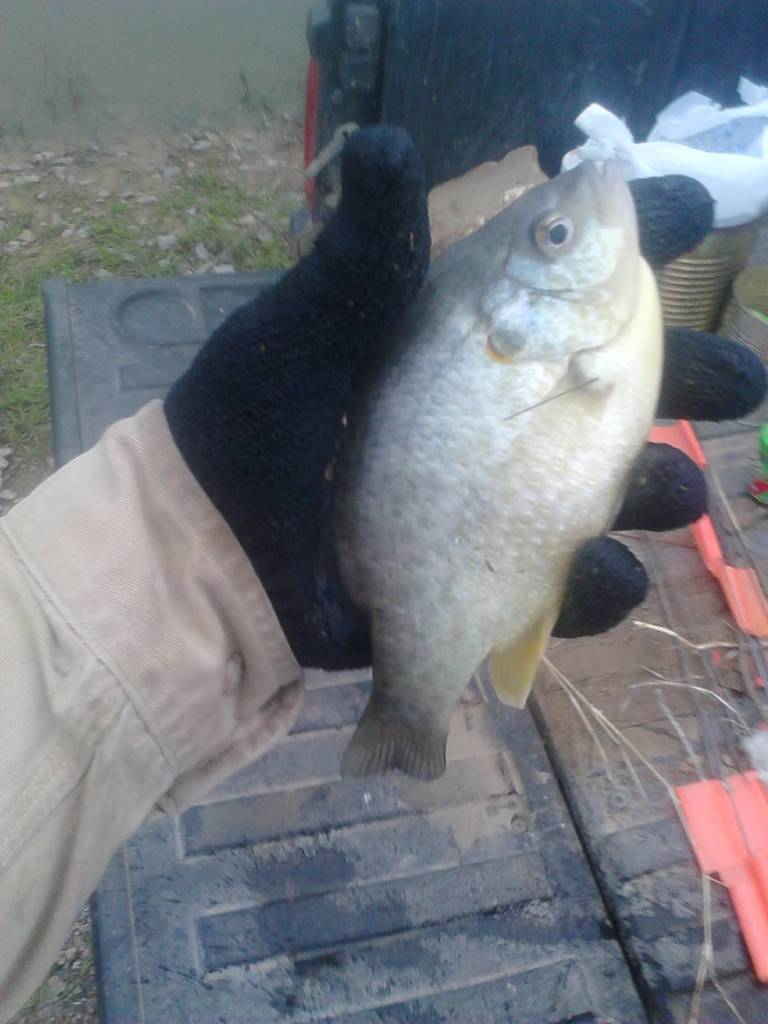 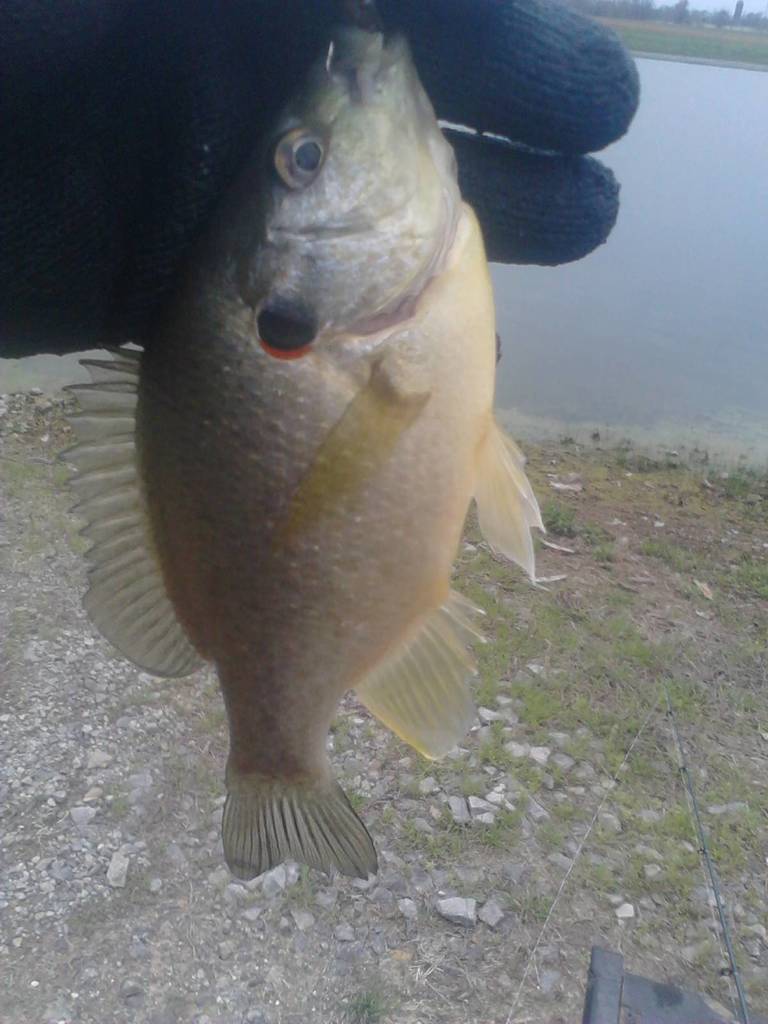 The 1/20th acre forage pond is about three years old. I just built a one acre pond that has not filled nor been stocked yet. It will be dedicated to Redear fish. Will stock redear and fathead minnows. Maybe small mouth bass some later years if the redear get too thick.

It is two years old. Caught a few more this evening. Moved the hybrids to my main pond and the pure redear to a nearby sediment pond that had a fish kill. Have moved 9 adult redear to it and about 70 fingerlings that I bought from a fish truck last week. Here is a couple from tonight. Caught several smaller ones. "By most accounts, redear are not skittish - until they are in shallow water.
They are most at ease with 8 feet or more of water over their heads."

Me too, but I'm a scuba diver. LOL

This pond is a little over 7' at full pool at its deepest point. When I was building it with the dozer, it was kind of straight down, raise the blade to full height, and straight up the other side.

I have tried quite a bit to catch them in deeper water, but just don't have much luck. Out in my big pond I have cover out in deeper water that I have fished around and have caught a very few RES, but considering there are probably a thousand bluegill in that pond for each one redear, I'm probably catching as many as probability would have it.

The purpose of the forage pond with fedear only in it, is I trap the small redear and move to the big pond, trying to up the redear numbers there. My fish supplier did not have nearly enough readear as I would have liked for the initial stocking, so the numbers of redear in my big pond are lower than I would like. Have moved probably a hundred 2-4" fingerlings to the big pond this year.

"It’s funny, lip hundreds to thousands of crappie and gills and this doesn’t…"
yesterday