The following pics are the various rigs I use to catch Catfish. 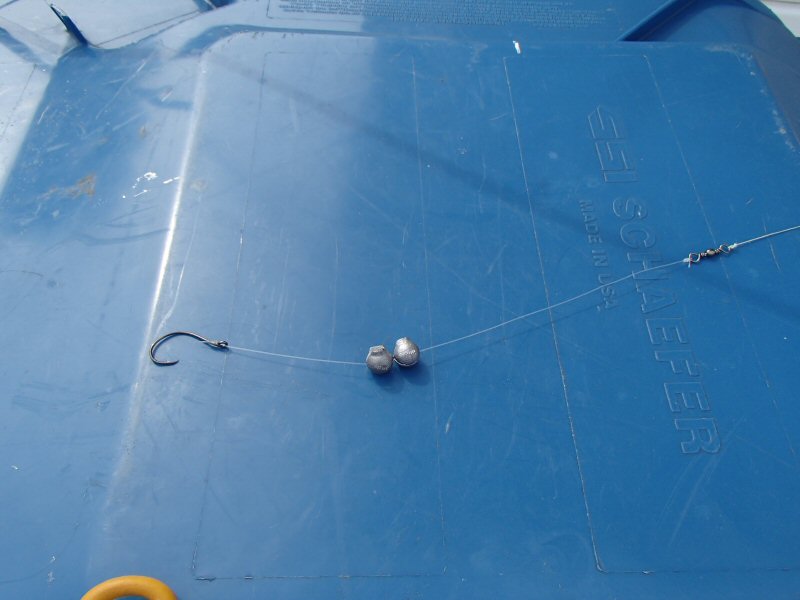 My basic bottom rig.  It doesn't get much easier than this.  I would usuallly fish thing when I was wade-fishing the Arkansas River in Tulsa.  I used to fish a spot that had a strong "band" of current moving through a chute, with an eddy on each side.  I would cast the rig out, into the current, and close the bail.  Holding the rod, I'd let the rig swing in the current until it reached the edge of the eddy, and the weight caused the rig to drop to the bottom.  The line is tight because of the current.  I'd just stand there and hold it.  Cats were holding in the eddy, waiting for food to come by.  I usually didn't have to wait more than 2 minutes (literally!) before I got a bite.  Channel Cats were a peck-peck-peck-grab.  Blues just came up, grabbed it, and turned sideways to the current.  That was always an instant hookup with a circle hook.  Sometimes I would miss a Channel, sometimes not.  Only caught one small Flathead doing this, and that was a solid grab-and-turn. 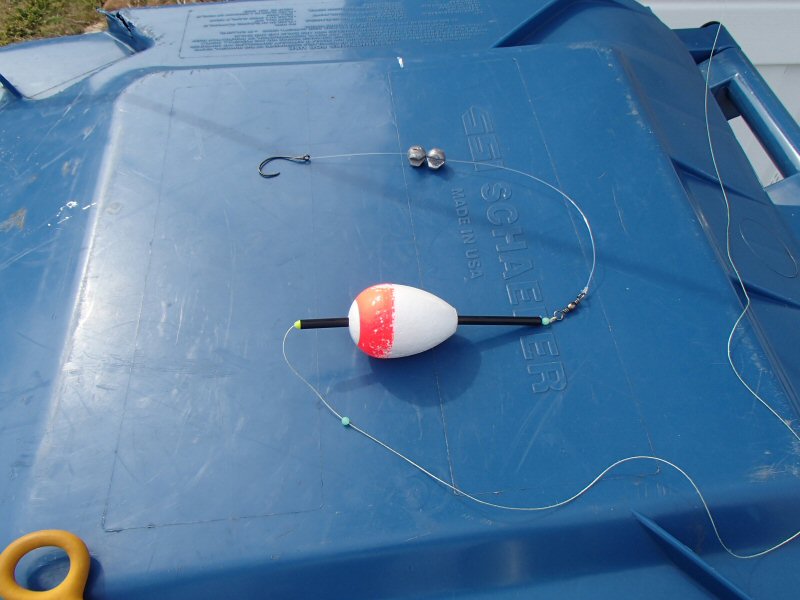 Take that basic bottom rig, and put a slip-float on the mainline above the swivel.  Great for hanging cut bait/worms under the float, working it through an eddy or a likely holding area. 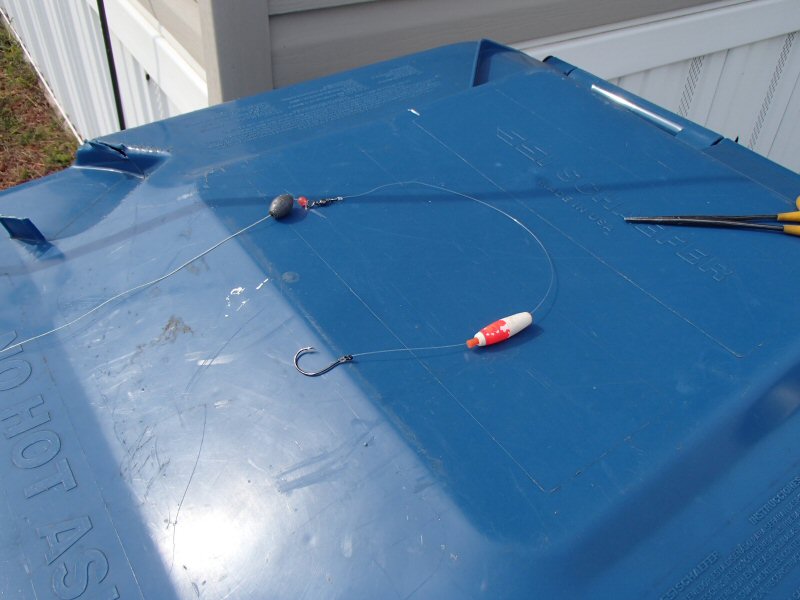 This is a basic slip rig.  This works great if you have a pole with a softer action, or a reel with a clicker.  The fish can't feel the tension on the line until it's too late, and the circle hook gives you an instant hookup.

There on two problems with this basic rig:

1)  Those round egg sinkers will roll in the current, especially if you're not fishing downstream.  A No-Roll sinker works best for that.  Sorry, I don't have any of those.  But, there's shaped like a teardrop (but much bigger), and flat.  They have a hole through the long axis of the sinker, so it's still a slip-sinker, but it will not roll.

2)  If the sinker gets wedged inbetween some rocks, you're probably going to end up breaking your mainline and loosing EVERYTHING, weight, leader, hook, and maybe even fish.  Therefore, I always prefered the following rig: 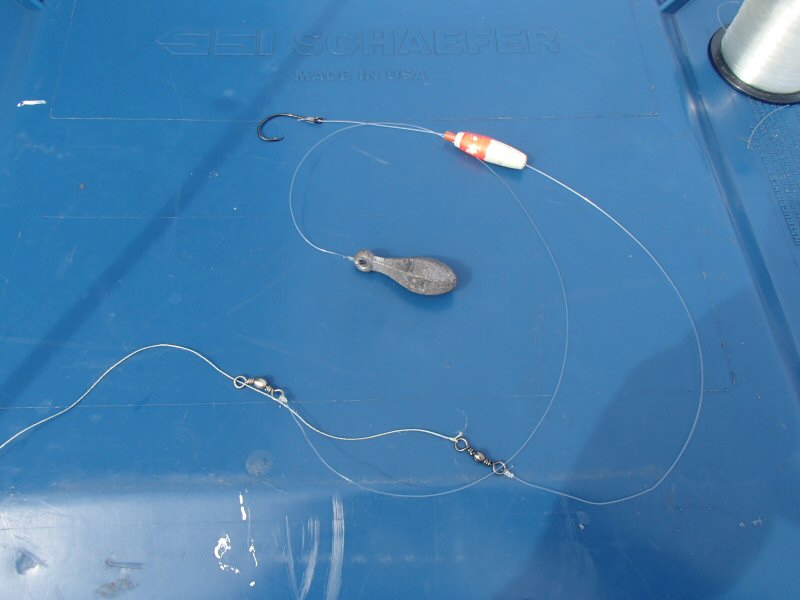 The Paternoster Rig.  This rig is English, if I remember right.  The weight is on a dropper, attached to a swivel.  However, that swivel is not *tied* to the mainline, but has the mainline threaded through one eye of the swivel.  A second swivel *is* tied to the mainline, with the leader and hook tied to that swivel.  This is technically a sliding rig, so I like to use it with a slower-action rod, or a reel with a clicker.  Again, instant hookup.  If you're in a snaggy area, you can tie the rig with a weaker lbs test line for the dropper going to the sinker.  If it gets hung up, you'll loose the sinker, but still have both swivels, the leader, hook, and maybe fish.  This rig can be a bit of a mess to cast, but does really well.  NOT PICTURED:  Add a slip-float to the mainline above the swivels.  Use a longer dropper for the weight, and a really short leader for the hook.  If you use a really BIG float, something so big a live sunfish cannot pull under, you can pin that bait in one area.  I used this in the river, in about 5 FOW, with the dropper for the weight about 3' long, leader for the hook about 6 *inches* long, and the slip-float set so that the sinker was making contact with the bottom.  The float wouldn't get carried off in the current, and the bait couldn't pull the float under while trying to swim to the bottom.  So, the bait just struggles and struggles, sending out vibrations all over.  DEADLY tactic for Flatheads. 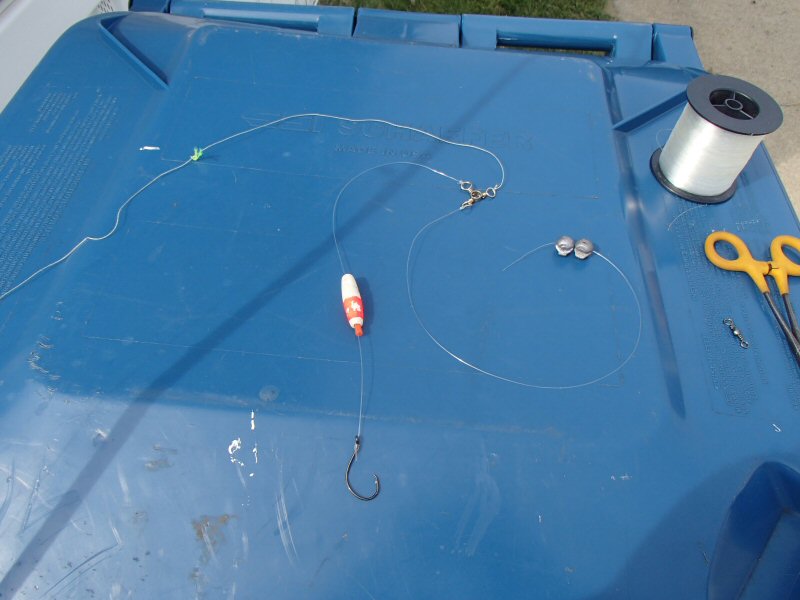 The Three-Way Rig.  Again, this is a good rig to use in snaggy areas.  If the sinkers get hung, the shot will just strip off the leader, and you get the rig back.  If the hook is hung, you might loose the hook, but you'll still get the weight back.  I typically used 20 lbs test for the dropper for the shot.  If I was using the same lbs test for the leader and hook, I didn't have to worry about the weight breaking off first, as the shot would pull off.  This is a bit of a mess to throw, but it worth it.  I also like to use this rig when I'm dragging cut bait on bottom from my kayak.

You will notice that I have some small styrofoam floats on the leader a few inches away from the hook.  Catfish are not shy about leaders or floats, so this doesn't scare them off.  What it does is keep the bait up off bottom.  Big Blue cats have a gut.  Think *beer gut*.  They have a very hard time picking up bait off the bottom, but if that bait is suspended in the water column (from a float hanging down, or lifted up from the bottom like this), they have an easier time grabbing the bait.

Thanks Allen ,great job! I would like to get into Flatheads and Blues .Probably a better chance out here for Flatheads . I think they are listed as invasive in New Jersey.

I have been experimenting with slip weight /shot distance from hook .I place it usually 18-24 inches away but prefer 18" .

Are you fishing in current, or still water, such as a lake or pond?

In current, your leader will flap like a flag.  The longer the leader, the bigger the "flap".  If it gets to big, it's an unnatural movement, not to mention hard for the kitties to actually bite it.  That's why I tend to keep my split shot about 6" from the hook when I'm fishing in current.

If you want to target Flatheads, you need some stout gear.  I'd recommend a Ugly Stick Tiger (the weird orange color), with a reel that has a clicker.  Toss the bait out, get the line set how you want it, turn the clicker on, and hit the button to release the spool (for a bait-caster).  My dedicated Flathead rods have 65 lbs test PowerPro braid, and I typically don't go less than a 40 lbs test mono leader.  Of course, I was hoping for a 30 lbs or better Flattie.  Never caught one bigger than 12 or 14, can't remember which.

That said, I've caught more Flatties on 40 lbs test braid, 20 lbs test mono leader, and of all things, CUT BAIT!  None of those fish were terribly big, between 7 and 12 lbs.

I'm going to try and make a thread about "Strategies for Catfish".  That will give the basic methods I used for catfish, and the hows and whys of what I was doing.

I fish only in a lake for Cats but would like to expand so I appreciate your input .

"Thanks Bruce, he was very happy!"
yesterday

"Thanks John, I’ll save you a place at the table……"
Friday

"That sounds great !What a feast!"
Friday

"Thanks Men! Looks like I'll have some Trout to smoke up for a 4th of July gathering. Got 5…"
Friday

"I’m on it Mikey-D…….Sweet Corn just started coming in so it sounds…"
Thursday

"That looks good John you are catching some nice trout there huh? "
Thursday

"Thanks Bruce if one person enjoys my posts it’s worth it……."
Thursday