Why Everything You Know About Bluegill Management is Wrong

Bluegills are prone to overpopulation. This is accepted knowledge among many anglers.

If you don’t catch and keep a lot of bluegills out of a pond, you’ll often hear a fisherman say, the bluegills will overrun the place. You’ll soon have a pond full of runty, stunted fish.

This is why the bag limits for bluegills are typically very liberal – it is not unusual to be able to keep 25 fish a day. It’s the angler’s duty to catch and eat as many as possible – keep the herd in check, if you will.

In fact, research conducted by Andrew Rypel, research biologist with the Wisconsin Department of Natural Resources, suggests the opposite: that liberal harvest limits on bluegills actually decreases the size of fish.

“Fish Here Aren’t As Big As They Used to Be”

Bluegills are often the first fish many anglers encounter (including me). They are common in farm and urban ponds. They’re the fish kids catch with a Mickey Mouse rod, a bobber and worms.

In the spring, many anglers target them on their spawning beds, where the biggest males are often easy to catch (see yesterday’s blog for the full details on this spectacle).

Bluegills are also popular because they’re tasty. Anglers call them and similar-sized species – crappies, perch, other sunfish – panfish. They’re the perfect size to fit in a frying pan.

Rypel and his colleagues in Wisconsin noticed something over the years: Anglers reported decreasing size of bluegills and other panfish. Of course, conventional angling wisdom would suggest the solution to this would be to harvest even more bluegills. After all, decreasing size is a sign of overpopulation.

Rypel analyzed size trends going back to the 1940’s, and found that bluegills (and other panfish species) steadily declined in size over a 70-year period.

Researcher Andre Rypel (right)  first encountered bluegills as many of us do: as a young kid, fishing.

“The regulations are relatively liberal,” he says. “I thought one possibility might be that we were fishing them too hard. As we looked at the data, we found that evidence of bluegills becoming stunted because they were overpopulated was not as common as previously thought.”

Fishing pressure, particularly on spawning beds where bluegills are most vulnerable, can be intense. And that pressure may be decreasing the size of fish.

In response to the trend, the Wisconsin DNR reduced the bag limit to 10 fish on 10 lakes as a test. Researchers, including Rypel, analyzed fish size before and after the regulation.

They found that fish size increased on average a half-inch on maximum size and .8 inch on mean size.

That may not sound like much, but consider that a typical bluegill is six or seven inches, and a really large one is ten inches.

Rypel published the findings in the North American Journal of Fisheries Management.

A New Experiment in Bluegill Management

The management regimes will run for ten years. “We’re going to find out what different regulations can do for panfish size,” says Rypel.

The good news is that bluegill size rebounds when fishing pressure decreases. A study by Rypel in collaboration with researchers at the University of Wisconsin-Milwaukee, School of Freshwater Sciences found that the reduction in size was not likely due to a shift in genetics, as has been shown to be the case in some other prominent studies on fishing pressure.

Anglers have, in general, been reluctant to embrace size limit reductions. Rypel points out that the limit reductions may actually result in more meat harvested. That may seem counterintuitive, but it’s true. “As bluegills get bigger in length, they get exponentially bigger in weight,” he says. “So if you catch a few larger bluegills, you often get more meat than if you caught a bunch of smaller ones.”

There is still a lot biologists don’t know about bluegills. New research will likely call for more changes in fishing regulation, but Rypel acknowledges that science is only one part of fisheries regulation.

“Regulations are a blunt instrument,” he says. “They cannot account for all aspects of fisheries management. If they get too complicated, they become much more difficult to enforce. We want regulations that are easy to understand and easy to enforce. There are trade-offs. In this case, reducing the bag limit could help the resource tremendously while still meeting the expectations of anglers.”

And while the bluegill may seem an unlikely symbol for global fisheries management, what Rypel says applies to large commercial fisheries as surely as it does the local farm pond. Regulations are only ever partly about science, and they can never fully account for the complexity of a fishery.

The key for resource managers is to use sound science to create regulations that work best – for fish and for people.

“Bluegills have the opportunity to get bigger with a relatively minor shift in fishing regulations,” says Rypel. “Our research is providing the evidence that it benefits anglers, too. The findings seem counter-intuitive to many anglers, who have long believed that smaller bluegills was a sign of overpopulation. But perhaps our long-term studies can convince them that lower bag limits can mean better fishing, and bigger panfish fillets for the fish fry.”

Matt Miller is director of science communications for The Nature Conservancy and editor of the Cool Green Science blog. A lifelong naturalist and outdoor enthusiast, he has covered stories on science and nature around the globe. Matt has worked for the Conservancy for the past 14 years, previously serving as director of communications for the Idaho program. More from Matt

Food for thought Slip, but I still think over-population contributes to growth or the lack of it.  It may not be the main reason like the article states. I hope to see the results of the study, interesting article. I'm  not sure why fishing spawning beds would make fish shorter, that I don't understand. Maybe someone could explain that?

Bruce, it has to do with the reproductive strategy of bluegills. Basically, the largest male bluegills get the best nesting sites, AND get the girls. Bluegills have the ability to delay sexual maturity....once a BG matures, its growth slows dramatically, as energy that was once devoted to growth is transferred to reproduction. Smaller male bluegills can recognize that their diminutive size  means no action with the ladies, so they put off maturing sexually until they grow larger....remove those larger fish from the spawning beds, and suddenly there is no longer any need for the smaller fish to continue growing....they have become the largest bluegills present strictly due to the removal of the bigger specimens! Nature says, "reproduce", so they become mature very quickly and their growth slows way down.

Now, where once the mature male bluegills were 9", they are only 8". Next thing you know, the eight inchers are being targeted by anglers, and those 7" male bluegills step up to the plate. It can be a vicious cycle.

this is a very disturbing photo....i had to post... (from your link above.) 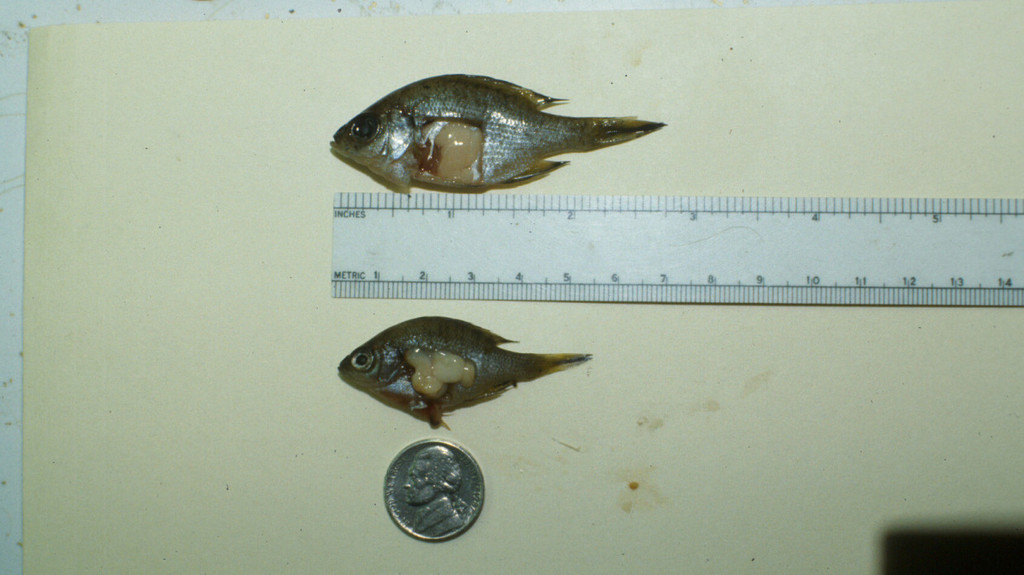 in essence removing the larger dominant males from the spawn leaves these little guys to reproduce and pass down deficient genes to the pool.

The likely key to why reduced harvest resulted in larger bluegills was not that they survived to live longer and grow larger, but because they didn’t begin reproducing until they reached a larger size. Sexually mature fish channel a lot of energy into developing gonads and building and guarding nests, which leaves less energy for body (somatic) growth. By delaying sexual maturity until reaching a larger size, the fish can grow faster because energy is not shunted to reproduction. Jacobson found that average length at maturity of male bluegill increased from 6 inches before the 10-fish regulation to 6½ to 7 inches four years after the regulation was implemented. During the same time period, average length at maturity stayed at 6 inches in the reference lakes with 30-fish limits.

So Slip, Predator fish is the key and not reduced harvest?

"The testes of sneakers and satellites are a significantly greater proportion of the fish’s body weight than are the testes of a parental bluegill. Further, the milt of the cuckholders has a higher concentration of sperm, and the individual sperm cells have longer flagella (“tails”), higher concentration of energy compounds, and swim faster, giving the cuckholders a competitive advantage in the race to an unfertilized egg."

So all in all. If i want to have the most the most potential from my personal pond it would be more optimal to release the 9- 10 inch bluegill i catch and keep the 7 to 8 inchers if i decide to keep any? It makes sense actually. I thought taking out the bigger bluegill would get the smaller ones to fill those shoes of the larger bg's, but i guess has the opposite effect

That's what I take from it, Brian, but hopefully, Slip or another expert will confirm it. The way I understand it is that if you constantly cull the biggest spawners, the size of those will keep getting smaller, and will produce smaller gills.

i was shore fishing a spot at a public launch one day a few years ago and spotted a tiny P'Seed on a bed in shallow water ... this thing  was only about 3.5 inches long i was shocked to see a fish that small guarding a nest.

I definitely feel overpopulation can have a negative impact on the bluegill size hierarchy. I think the key lies in moderation. As in too many large BG harvested may equal smaller fish, just like too few harvested may also produce stunted fish. I believe that every BOW has its "sweet spot", that magic figure where just the right numbers and sizes of bluegills get harvested to promote and grow larger specimens. The trick is in finding and maintaining that balance. That's why I am not a fan of blanket statements where BG harvests are concerned. Some ponds/lakes need greater harvests, some less.

i see now two scenarios overpopulated or stunted b'gill... older gills that remain smallish and slow grow and the second group being small fish due to over angler predation skimming large from the top... is the only way to distinguish one from the other is scale sampling for age?

There are a few telltale signs. slip. I've mentioned here before to look at a bluegill's eyes....an eyeball grows at a constant rate whether the fish is stunted or not, so that's a good indicator. Small fish with larger eyeballs? Could very well mean an older, stunted fish.

Check out the fins and tail....do they appear disproportionately large for the fish's body? Could be a genetic trait, or might mean a fish that has lived a full life with not enough to eat. By the same token, that's why fish folks like to see bluegills with large bodies and small tails/fins....that is an indication of young age, and rapid growth.

"That’s why I had a replica done Bruce…….not a big fish but the colors are eye…"
yesterday