Ice fishing intrigues me because it ends my fishing here!!!! Michael has already been out on the ice, so how do you determine the thickness!!!! Who is the first one to go out and check, the smallest of the group??? What precaution do you take as you venture out on the ice?????

4" is considered safe.If I see the open water of the nearby reservoir iceing up it usually indicates the small shallow lakes are ready or have been.

Always walk with a spud to check the ice as you walk. I am a big guy so I wont go out unless there is 3" of black ice. Also you need to know your water. One spot i fish is no deeper than 4-5 ft. I will take more chances in shallow water than deep water. No matter how deep it is its cold when you fall through. Alway have a rope or spikes with you to be able to get out. I also try to always fish with someone, never alone. I have fallen through once in 3 ft of water and walked to shore. By the time i got to the truck my pants were froze drove home in my boxers. lol Its not fun no matter how deep it is. :)

A spud is the old fashioned way to make a hole. It hard to describe. It has a long handle and a flat sharpened end on it to chop a hole in the ice. They were used back in the day when there were no augers. I have one made of rerod and it works great for opening old holes up. Also helps for walking on slippery ice. I will walk on the ice and every 20 steps or so make a small hole to check the ice. If it goes through the ice in one hit you know your in trouble. :)

If you make one, install a strap. If it slips out of your hand when it breaks through the ice, it's long gone........ 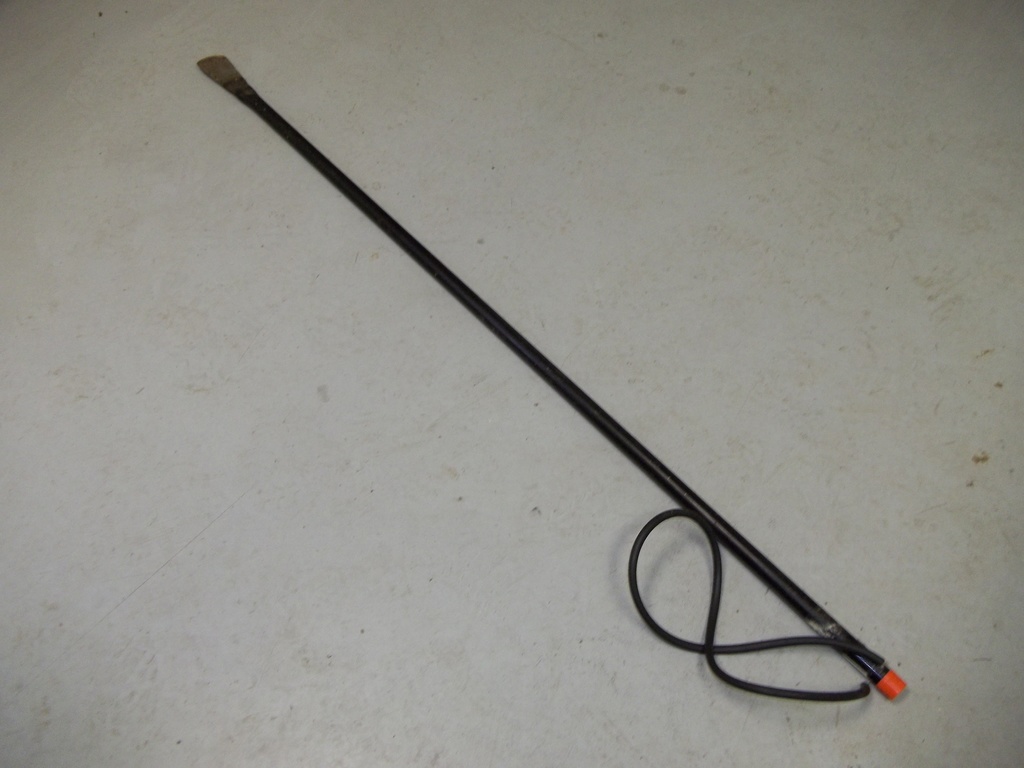 I am a firm believer that there is no such thing as safe ice. John is correct in stating that 4" is the minimum thickness usually accepted as being able to support a person traveling on foot. However, thickness is only part of the equation, as old, rotten ice that has melted and re-froze can be 5-6" thick and still not support your weight. Snow cover can cause the ice underneath to do strange things also. I do as Harald suggests, in that I travel with a spud bar, and strike the ice with it as I go. If it goes through in one or two good jabs, then turn around and follow your tracks back out.

The black ice that Harald speaks of is what every icefisherman wants to see. It's actually clear, and the water underneath makes it appear black. Clear ice is usually the strongest ice, while milky or cloudy ice will bear watching. Not that it won't hold you up, it's just not as strong as the clear stuff.

Also, black ice is slick ice.... wear some ice cleats, or be prepared to fall down a lot!

I have attached a pic of my spud. not a great pic but you get the idea. Mine is a little different than Tonys but same idea. :)

Tony, in Oklahoma there is no such thing as safe ice!!!!! I have at times seen as many as a dozen head of cattle on the ice!!!! That should make it safe ice!!!! But I have also seen and heard of that many breaking thru the ice end of herd!!!!

How far out on the ice do you go to fish??? Do you stay where the water is not over you head if you break thru????

Well, for me it depends on the time of year it is. If it's early ice, the weeds are probably still green and upright, so I'll start off shallow in the weedline. I'm looking for lanes, or bare spots in the weed growth. Mid season ice, the fish will usually move deeper, as the weeds have died down, and may no longer be providing the food source that the gills' use. Not to mention if the weedy area is in a bay, off the main body of water, as then the decaying vegetation under the ice can create an isolated area of low oxygen, and the fish will move deeper.

Mid-winter, I usually find gills' suspended right over the bottom, in deep water. A mud flat, or plain, appears to hold food for them, and they will stick fairly close to it, moving in and out throughout the day.

Late season ice is similiar to early ice, as the snow cover has melted off the pond, allowing sunlight to penetrate deeper, the weed growth has responded to it and is regenerating, and the runoff of melting snow has helped replenish some of the oxygen. The fish will move shallow once again, and this can be a great time to catch them, as they are usually more than willing to sample your baits, at least that's what I find.

However, late ice can be treacherous, with rotten spots and weak areas.... exercise even more caution during this time of the year.

That's what works for me, maybe Harald will share his strategy and methodology with us......

Bruce Tomaselli commented on John Sheehan's group Multi Panfish
"Wow, it ought to be a record somewhere."
2 hours ago

Eric Pierce commented on John Sheehan's group Not losing Fish with right Gear and Technique
"I am John. Almost there. Had some scar tissue from colon surgery get tangled and wrapped up with…"
22 hours ago

"Thanks John….I’m going to try to find some and give it a whirl…..catfish are…"
yesterday