Permalink Reply by Josh Milczski (Omaha) on February 3, 2010 at 5:31pm
Curious as to what the heck a cooling lake was I did a search and found this - http://www.illinoisgameandfish.com/fishing/IL_0106_02/. Not sure if it's the article you're looking for, but pretty informative for your location. Pretty neat.

Permalink Reply by Joe Hinton on February 4, 2010 at 11:50am
Hey Josh
Thanks for the reply and the link. I was aware of that article and Braidwood is the cooling lake of my choice. I fish there often. Best of luck on your next outing.

Permalink Reply by Johnny wilkins on February 8, 2010 at 4:27pm
I am wondering if because the water in the cooling lakes is heated if this heat is enough to keep the shore a little warmer?
Also, are either of the lakes still warmed by an active power plant? Just wondering and getting cabin fever.

Permalink Reply by Johnny wilkins on February 8, 2010 at 4:47pm
Thank you for the cooling lake link. I will do some reading and Googling locations from that information. My car may be headed out there to answer some of these questions- ROAD trip! First I need some fresh bait...

Permalink Reply by Chris Salmon on February 3, 2010 at 5:47pm
all i know about them is i know they work, i seen them used on videos and any new articles about them. But as for using them i've never used them so i don't have an answer other than that they work.

Permalink Reply by Joe Hinton on February 4, 2010 at 11:53am
Thanks Christopher,
I'll do a posting after I try them for the first time.

Permalink Reply by Jim Gronaw on February 3, 2010 at 6:03pm
The man to talk to is Bill 'Musky' Modica... he is the spoondaddy of bluegilling and has numerous blogs, discussions and a group called North American Spoon Chuckers on this very site. He got me started last year spoonin for gills and it is very well worth your effort. And yes, you can do this from the shore.

Check him out, Joe, and I'll try to get back on here with the success that I have had with spoons after Bill get's it started!

Permalink Reply by Joe Hinton on February 4, 2010 at 11:58am
Thanks Jim,
I'll go to Bill's page right after I'm through here. Hope I can have the same kind of fortune that you've had at spooning.

Permalink Reply by Johnny wilkins on February 3, 2010 at 8:07pm
Does the cooling lake have gills big enough for spoon fishing? Most of our gills in my region are very tiny near Chicago. i am curious as I would head there with only about a :30 minute drive for me to get to the cooling lake.

Permalink Reply by Joe Hinton on February 4, 2010 at 12:06pm
Thanks John,
Braidwood Lake is about an hours drive from where I live, I don't know just how big the bluegills have to be in order to catch with a spoon, I do know that there some pretty big gills in that cooling lake 6 to 10 inches easy.

Permalink Reply by Joe Hinton on February 4, 2010 at 12:12pm
Thanks 2lbgill,
Would I be correct in assuming that you catch 2 pounders pretty regular or is catching one your goal ?

Permalink Reply by Jim Gronaw on February 4, 2010 at 1:00pm
Hey Joe... I hope you checked out Bill Modica's spoonin info on this site. I started using them this year because his success just was too good not to give it a try.

Couple things...there is a learning curve to spoongilling and it takes some practice to get in the game. I would recommend you fish a lake that has lots of gills and at least some 8 inch or better specimens to try out the spoons. I have had my best luck on 1/16 th oz Rattlin Flash spoons tipped with worm pieces or Gulp baits. I fish them slow with the occasional twitch or pop, then anticipate a strike shortly after the twitch. The movement is the trigger. Any quality 4 lb test will do, but 6 lb Fireline Crystal, with an 18 in 6 lb flourocarbon leader, may aid in strike detection in cold water. Switch the treble hooks with the single hook that comes with it and put it on so that the hook point faces the opposite side of the rattle. I also use a small swivel so I can quickly change color/ or
sizes as needed. 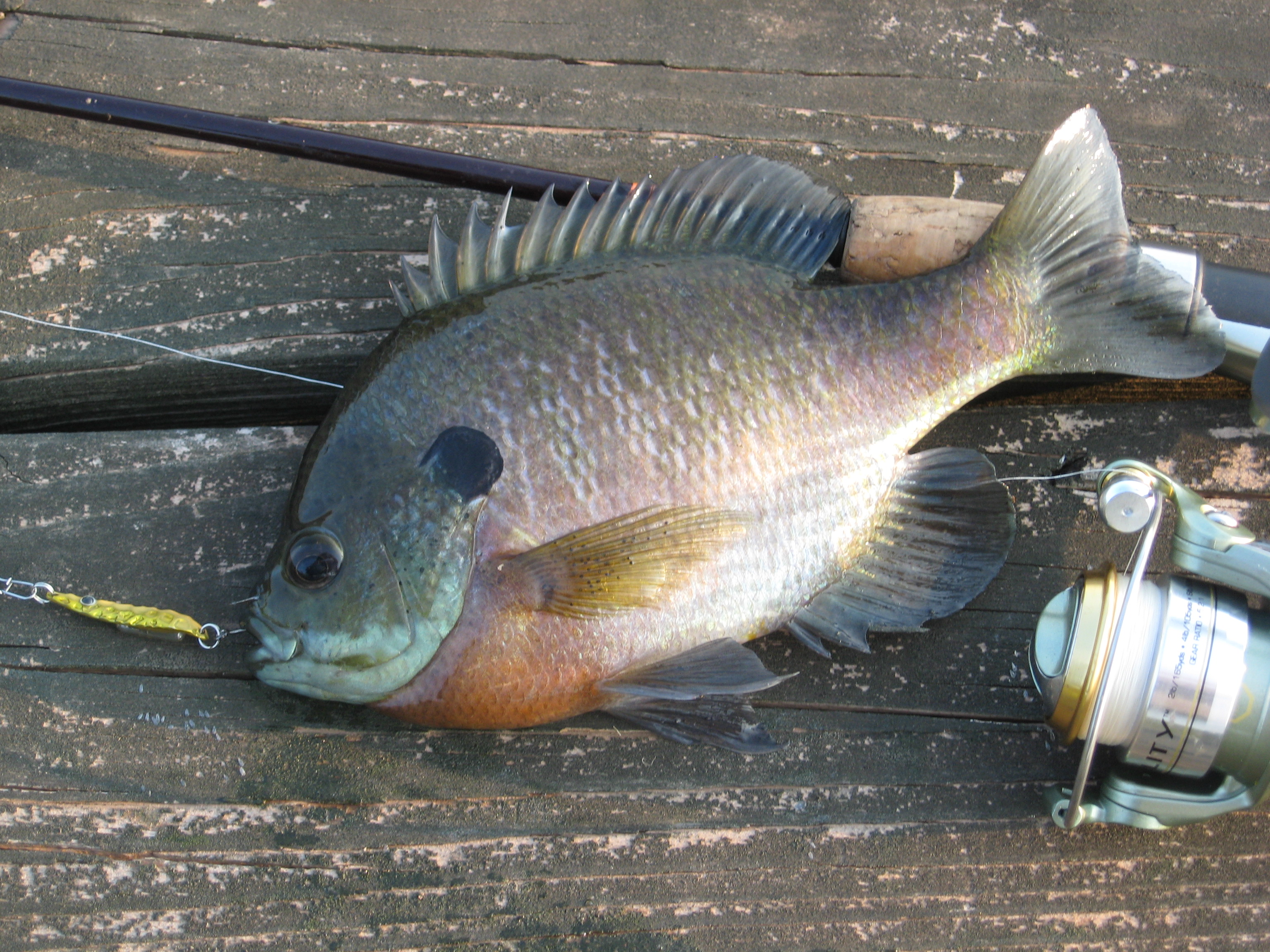 All this is Bills stuff, not mine. He is the master. After tirelessly watching his videos and taking mental notes, I finally got to the point where I was catching up to 2 dozen gills on a good outing with the spoons. I did notice that some of the larger fish, to include my personal best hybrid sunfish, showed a preference for the 1/5 oz Swedish Pimple...an old ice fishing standby for magnum yellow perch. This fish measured 11 1/2 inches and weighed between 1-10 and 1-12. I released the fish, and it may be a 2 pounder this coming year. Joe, I hope this all helps. One thing I would advise is to not 'give up' quickly, as some anglers do, when trying out new and innovative tactics such as spoon gilling. Good Luck!

"So beautiful. I wish I was on that boat."
7 hours ago

Jeffrey D. Abney replied to Timmy Bryant's discussion Pasquotank area bluegill fishing?
"The memories are the greatest part of fishing......I lost my dad in 2016 and he visited me here 20…"
19 hours ago

Timmy Bryant replied to Timmy Bryant's discussion Pasquotank area bluegill fishing?
"Yes sir made it to Garrington island once each last two years,didnt have any problems but a friends…"
20 hours ago

"John, you could fish around the Albemarle Sound everyday for a month and not have to go to the same…"
23 hours ago

"I concur.......the late Full Moon and warm weather next week are colliding, it looks good for the…"
yesterday

"Get em' Jack!   This cold snap has dropped our surface temps 10 plus degrees and…"
yesterday

"What a nice looking area to explore!"
yesterday

"It was a big male, Jeff. I let him go."
yesterday

"Great fish.....looks like a Sow with the orange ear tab......congrats Troy!"
Wednesday

"I took this shot for two reasons, give others perspective of the areas I fish and display the low…"
Wednesday

"Thanks Bruce......it was interesting yesterday.....the bluegill all but shut down with the drop out…"
Wednesday

"Great crappie. Man would I like a dozen of them in a bucket."
Wednesday

"What a hog. Nice one."
Wednesday