OK, looks like July 2, 2012 will go down as one of the all-time great panfishing days in history with a slew of high-end specimen of many species hitting the board tonight. Congratulations to all! Here's how my day went, the short version...

I hit a pond at about 3:30 pm that we had caught big red ears from in the past...had caught my previous PR there two springs ago. Saw some big fish bedding 2 weeks prior but could not get them to bite ANYTHING! The bluegill were still on bed, and the frequency of 10- inch fish made the live bait choice of worms/#8 Aberdeen hooks on 2 pound mono an easy choice for success.

Here's the problem...I spotted a pair of bedding red ears that I know were 12 inch, or better, class fish. I stayed back from the waters edge, made gentle casts with the half-nightcrawler presentation and tried to stitch them through the bedding areas, like Fish Chris does in his California lakes. The fish would come in and inspect the worm, turn away, come back again, nose up to the bait, then just hover above it or cruise off. Slight movements of the worm often resulted in the 'crackers bolting off and leaving a cloud of sediment that would disapate in a few minutes. I worked on those two individual fish for 1 hr and 45 minutes without so much as a strike from either one. During that frustrating time, I would occassionally cast out beyond the bedding areas, slightly deeper, and hookup with quality bluegills from 9 to 10.5 inches. I managed 15 of those and a couple of 1.5 lb largemouths. But no redears. 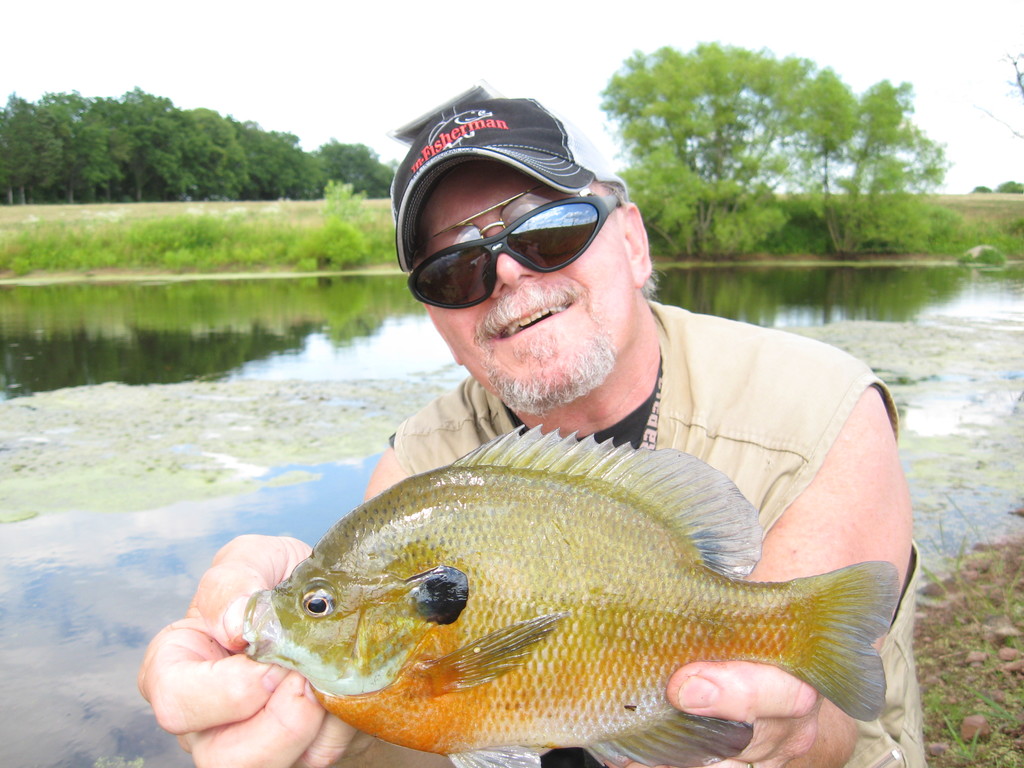 Each time I caught a fish, I would work it down and away from the rest of the bedding fish and release them several yards away from the area as well. I would bait up wait several minutes, then ease back in position to coax the 'crackers. This is the area that had the spawners, and they were easy to spot with cheapo-polaroids. I was working a worm near one of the redears when another shellcracker literally came from nowhere and nailed the worm, and I set the hook immediately to a screaming drag on two-pound test! Great fight, and the result was this Personal best of nearly 12 inches long... 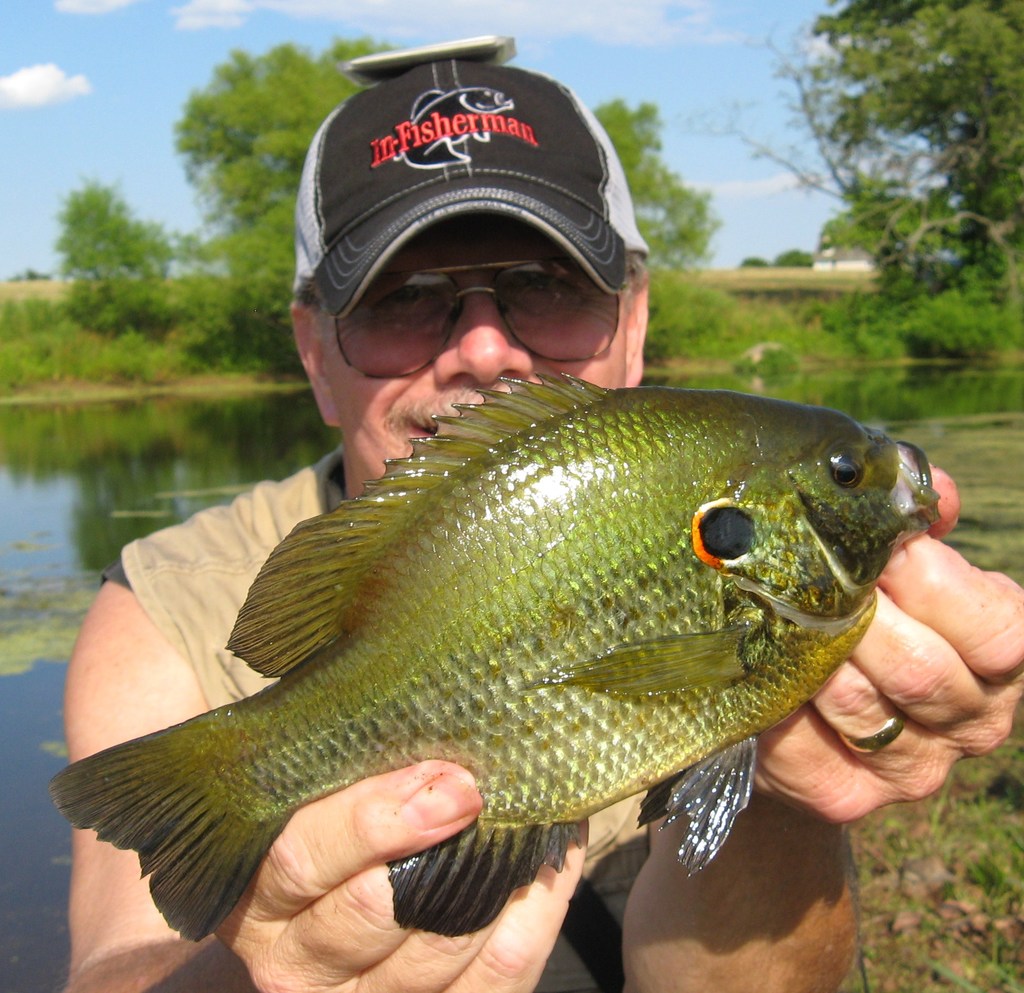 Believe it or not this redear was smaller than the two that had eluded me all afternoon, and just got me pumped up to catch the larger fish. But, it didn't happen, but still, a PR is a PR, and always makes for a great day fishing regardless of specie or size.

I have seen spawning red ears in the past just inch up to a worm, quickly inhale it and expel it in an instant out side of their bed. I need help...I think I am going to try whole garden worms or redworms rather than the half-nightcrawler option.

Any suggestions to capitalize on these great fish would surely be appreciated! Thanks!

The odds are definitely stacked against the angler who tries to sight fish Redear, especially in this kind of heat. You need to see the fish, to be able to tell when they pick up your bait, but at the same time that means they can see you, and are even spookier than usual. Factor in the problems associated with keeping your bait lively in the hot weather, and it can be a struggle.

Jim, I think I would try early morning. Even better if that timing permits you to keep your shadow off the water.

One of the problems is the heat...95 to 100 degrees, and I have to keep the crawlers in the cooler or they will quickly die. Almost as soon as the sun and 82 degree water hits them, the become lifeless and unappealing on the hook. I 've been using #8  bronze Aberdeen long shanked hooks...a hook I have done well with for many bait applications. Plus, the fish can see me, but I was wearing camo clothes in the bushes yesterday and they didn't spook as much. Still they wouldn't quite commit to the lifeless crawler pieces.

I'm getting some smaller, more active baits and heading back out soon...I feel there are many other redears in there that I don't know about. 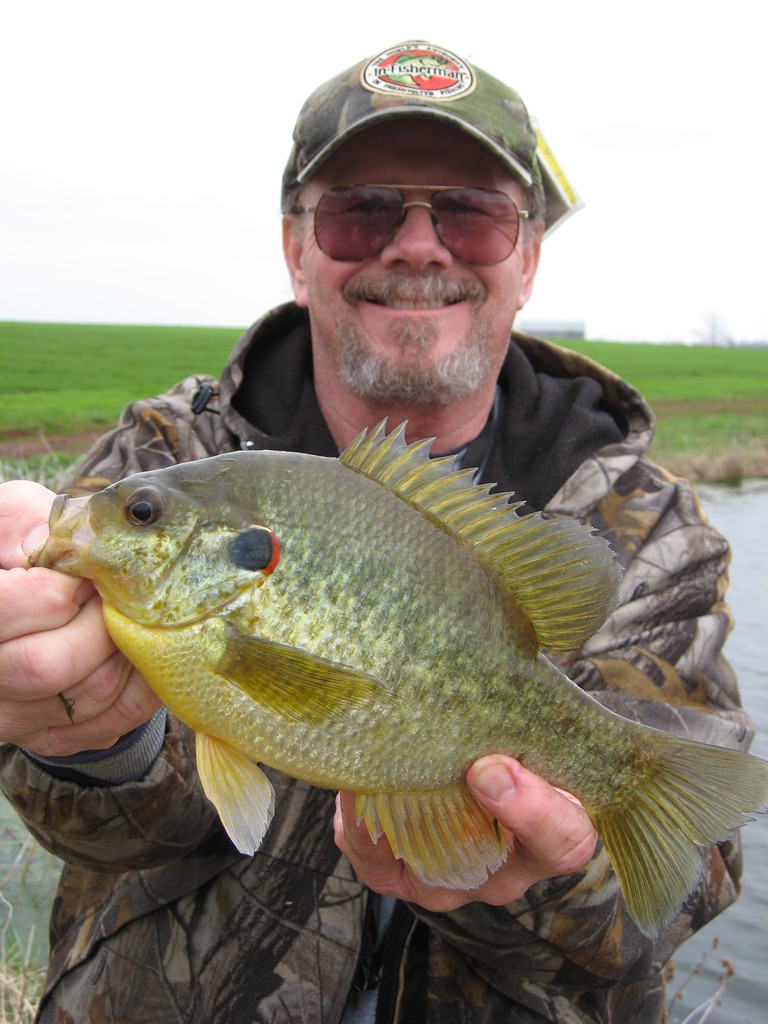 This big female is from the same pond in April of 2011...11 1/2 inches. I think I am just barely scratching the surface on these spooky fish.

As I recall, these type of situations called for us to use the "Georgia Jumpers" type of redworms that was discussed here on the forum a few months ago.  I agree with Shawn and Troy in that a lively worm, with no float and no added weight, would be my weapon of choice. Drop it in the nest and let it wriggle around, it HAS to move to be effective, but at the same time remain in the nest while doing so. I never had any luck on a really stubborn bedding Redear with a cast-n-drag type of presentation.

Red Worm, small hook, no float, no sinker..... just a small hook and a red worm and watch your line close.

Troy...I think you are right...I need to get smaller, active redworms or garden worms. As soon as I put the half or third of a nightcrawler on the hook it would just go limp and have no movement...bluegills would hit them but the crackers turned their noses up to this 'lifeless' bait.

I should have known better...thanks for the tip!

I would have a hard time catching anything at all if those two big redear were bedding because I'd probably devote the afternoon into getting them to bite.lol.

Jim, get some redworms and maybe put them in the fridge to liven em up a bit. If you can get over there with some really active redworms, meaning worms wiggling like crazy on the hook, those big crackers can't resist. The trick though is to get the bait directly in front of them and then watch closely because they're masters at just gently nosing down and "mouthing" it if you will. If you don't set the hook in time, the cracker will spit the worm out...I've had this happen a hundred different times. I LOVE sight fishing for redear because they will generally let you do that, bluegill will spook completely out of the nest. Big male redear will stay on guard much better, they may spook but will quickly come back to investigate. I once saw a ten inch male cracker chase a five pound snapping turtle out of it's nest!!

I went back today and could not coax them to strike, so I just fished for bluegills throughout the area of beds and ended up with 12 gills and 4 bass. I did try a small jig from LedHed called the Semi-Auto...got some good gills on it but the redears wouldn't bite. They looked at worms and small soft plastics as well as gulp...all of which caught some gills but the 'crackers wouldn't budge.

I agree about trying a nymph. A small profile spider worked over the nest would be my second choice.

John M. Grimes replied to Smoltz's discussion Full moon and the spawn?
"  I know I'm late to this discussion, but we fished yesterday 8/6/2020, 3 days after the…"
Friday

Last year (2009)was the first year slip floating for me and found it to be very effective.Would…See More
Aug 3
163 Comments