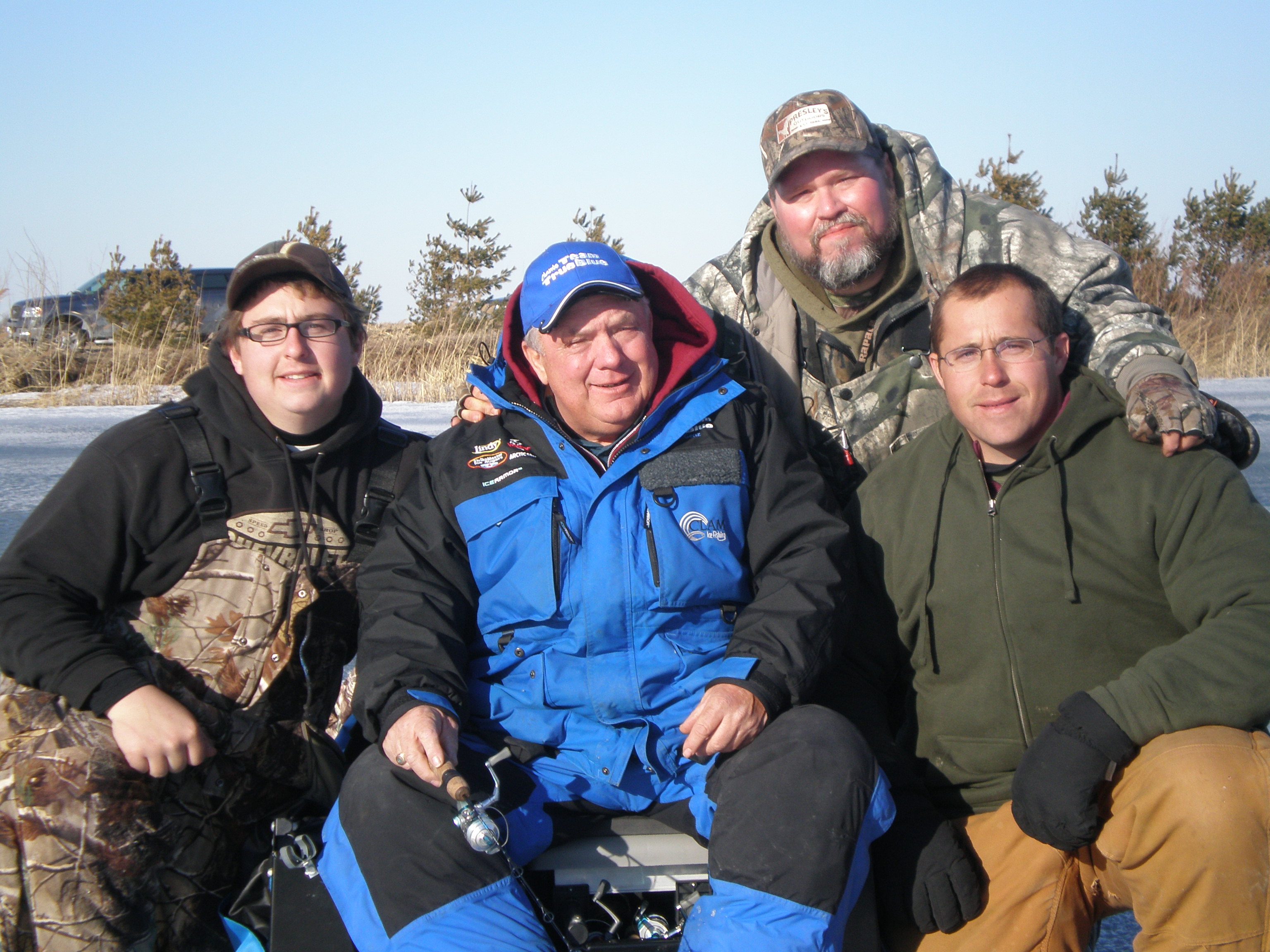 We were fishing a private lake north of Rochelle, Illinois. Words cannot describe what an amazing day this was! The wind was blowing 30 mph, the temperature was about 14 degrees, everyone had little portable Dave Genz fishing shelters to fish in but us, the film crew had to cancel because of the bad weather, the fish were not biting very well due to the cold front and high pressure system, and did I mention that it was freeeezing cold outside? Anyhow, despite all that, it actually was an amazing experience that I will never forget! 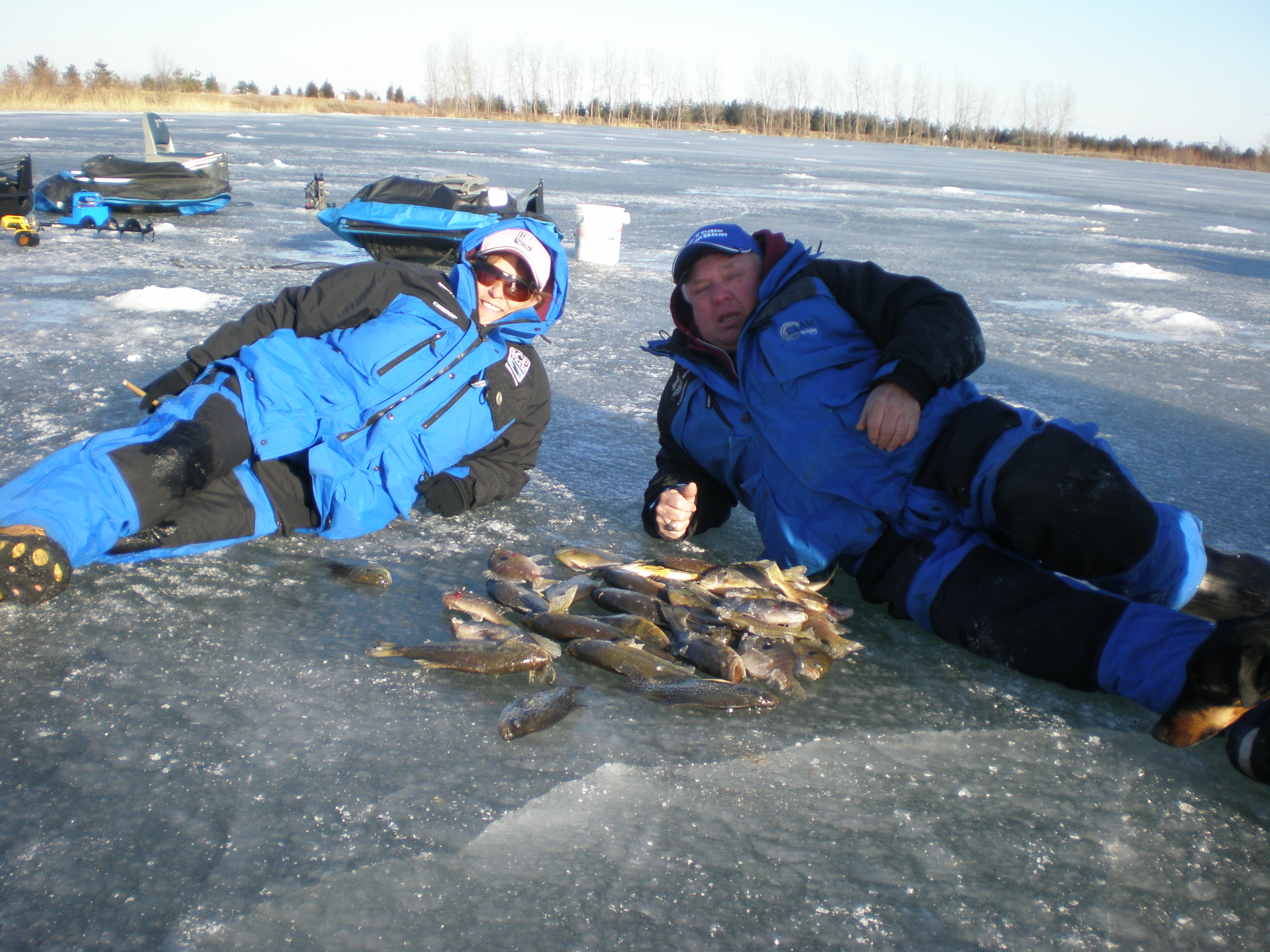 For those of you who don’t know, Dave Genz has already been inducted into Minnesota’s Fishing Hall of Fame, and he will be inducted into the national fishing hall of fame shortly. He is in the upper half of the 50 greatest fisherman of all time, and perhaps one of the very best ice fisherman in the world! Dave has his own line of ice fishing apparel, fish houses, fishing poles, fishing jigs, and much more. He also has been ice fishing with just about every professional angler on TV! 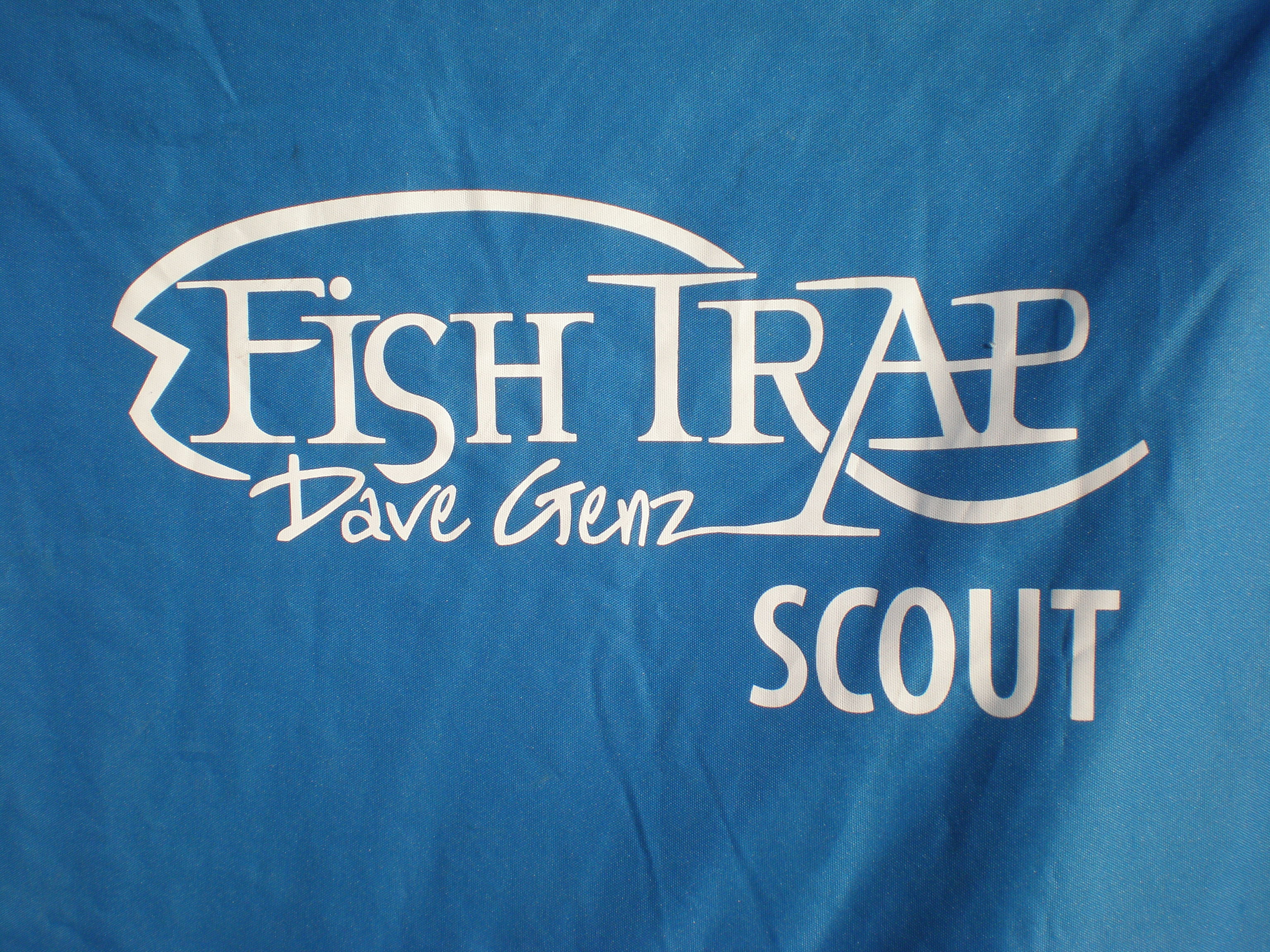 The day started out about 9 am on the ice. We pulled up with our Schooley rods and 5 gallon bucket seats. They pulled up with their snowmobile rigs, portable fish houses, power ice augers, umpteen Vexilars, St. Croix and Dave Genz rods, Ice Armor snowsuits, jigs with actual names, colored Eurolarvae, and probably other stuff I can’t think of at the moment. We got everything loaded up on Dave’s snowmobile trailer and headed out onto the lake. 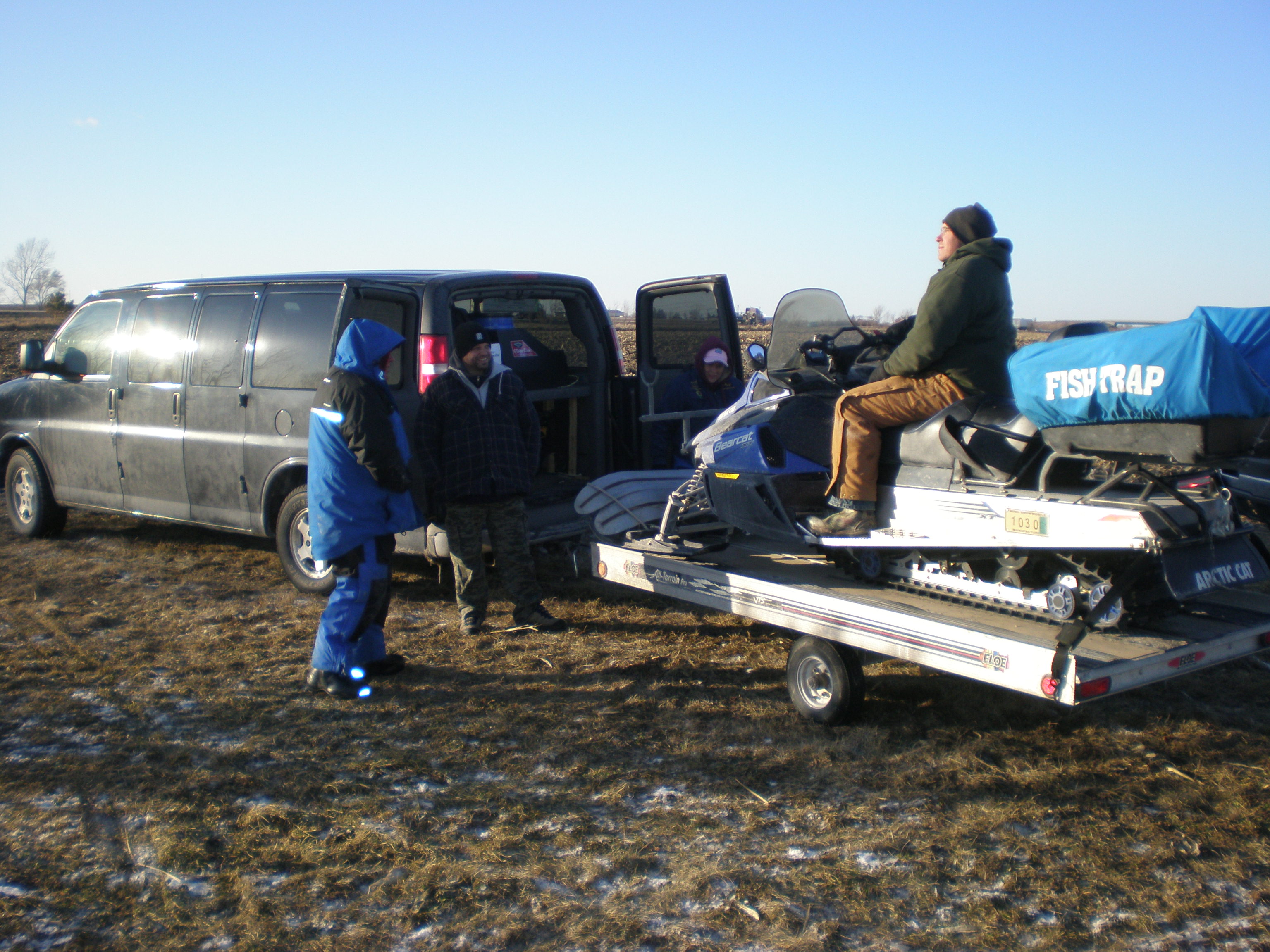 First thing we did was drill about a dozen holes per person and start checking them all out for fish and weeds. The bite started out pretty hot for Dave and his daughter Missy. They caught about a dozen real nice crappies right off the bat, and then the fish were tight lipped the entire rest of the day. We moved around quite a bit trying to find a school of fish willing to stick juicy maggots into their mouths. When we couldn’t find many takers, we decided it was time for a little Ice Fishing 101 with the man who virtually invented the Vexilar. 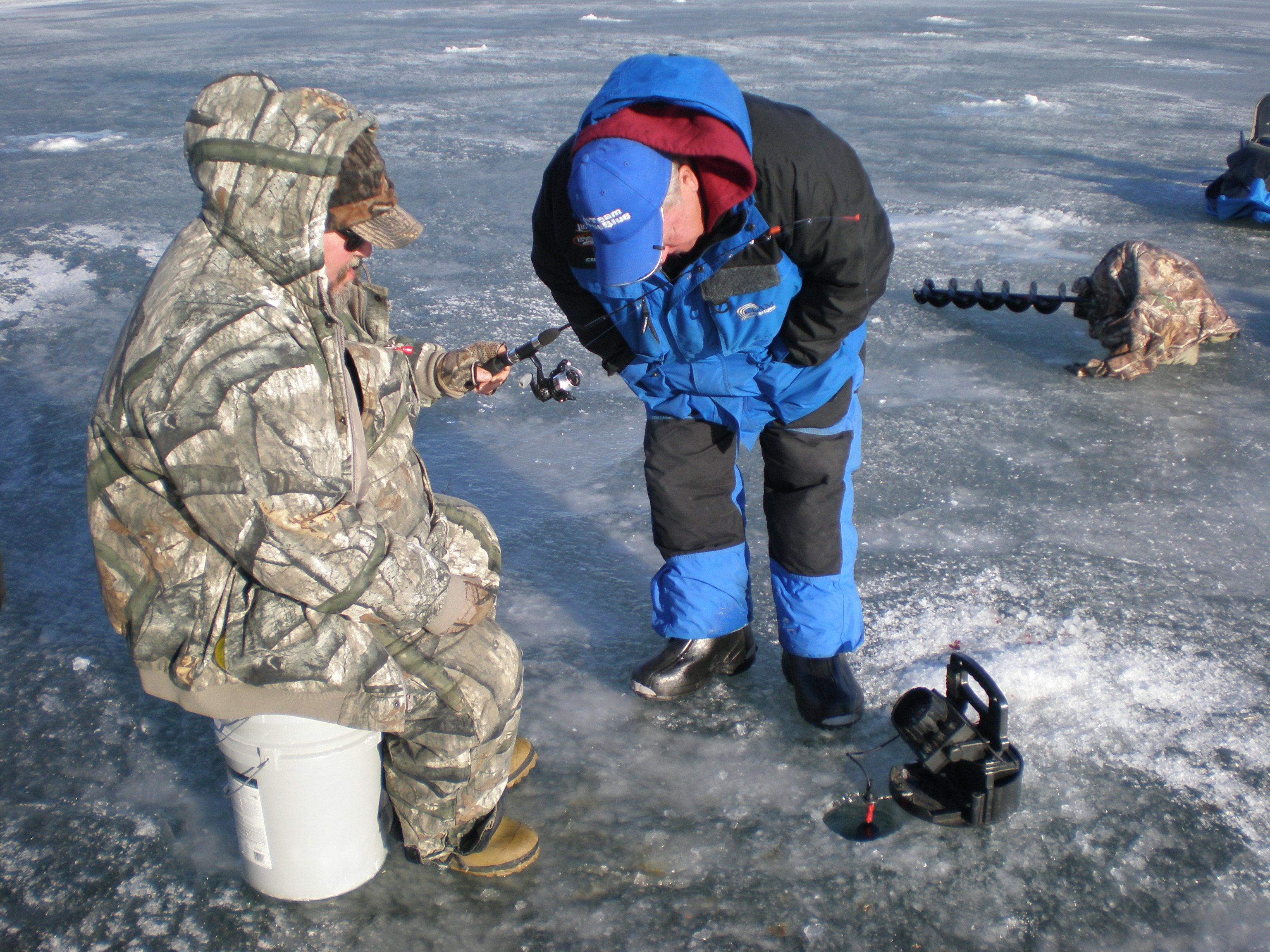 We headed in for lunch about noon. The owner of the lake, Chad, had a nice warm shed near the lake, and he and Chef Todd cooked up a feast! We ate grilled lane snapper, cheddar deer burgers, homemade cole slaw, and iced cherry coffee cake dessert! Inside we had a good time taking pics, telling stories, and gorging on some of the best food imaginable!

After lunch, we didn’t have much of a desire to move around and look for active fish, so we all just camped out over a small hump with a live weed bed and hung out! Of course Chef and I bombarded Dave with bajillions of questions, and he spent several hours just teaching us about ice fishing and telling fish stories. We even hashed out a few lake and fish management issues as well! As far as fisheries are concerned, he comes from a much different world than I do. The lake we were on today at 20 acres was teeny tiny to Dave, yet fairly large in my book. Managing public lakes that are 10,000 acres big with thousands of fisherman is much different than managing a private lake with only one or a handful of owners!

Anyhow, since the TV crew couldn’t film and Dave’s schedule had him checking into a Comfort Inn in Antioch later that night, he had the whole day free to just spend time hanging out with us. From 9 a.m. to 5 p.m., we got to hang out with an ice fishing legend! Dave is an extremely nice and personable guy. It was also an honor to get to spend time with Tod and his buddies! When we weren’t bombarding Dave with questions, we were soaking up their information!

When it comes to fishing, we have learned to stack the deck completely in our favor. We stock lots of fish into private ponds, give them gated communities to live in, and train them to focus most all of their time and energy on eating. Dave, Tod, and their crew however, they actually know how to FISH! 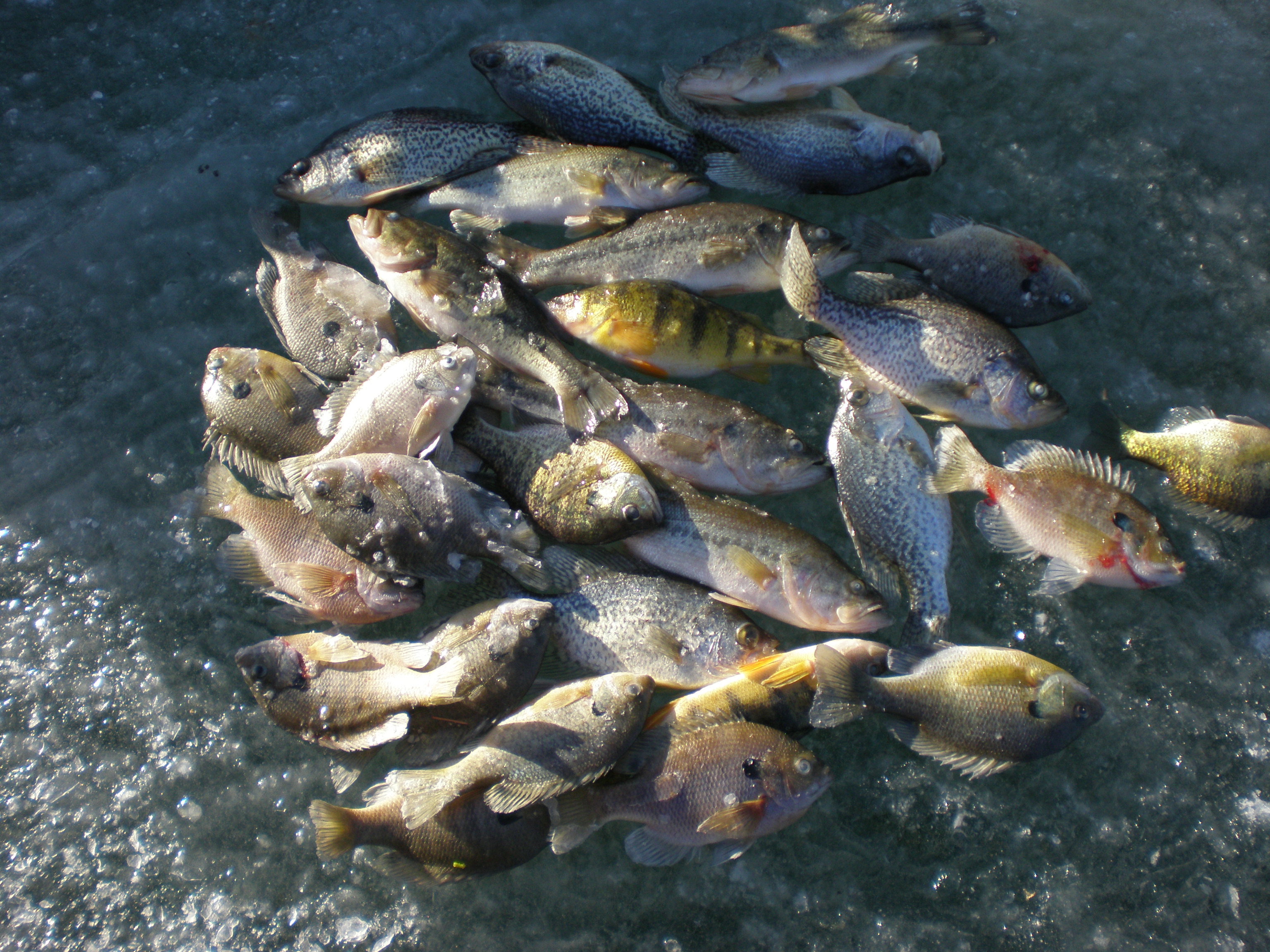 On a day like today, average fisherman would walk home with absolutely nothing. These guys still managed to catch a few keepers for dinner.

Comment by Nate Herman on February 23, 2009 at 6:28am
Dave's winter schedule has him on the go nonstop from Thanksgiving until March. He still ice fishes around the nation past March, but like 2lbgill stated early, the promotion of all things ice fishing pretty much ends for the season in March. Will try to get him on board bigbluegill.com this spring!

Comment by Bruce Condello on February 22, 2009 at 9:07pm
One of my goals would be to chat about bluegill with Dave Genz. Maybe we could get him to be a member of Big Bluegill sometime! :-)

Comment by IceWarriorGill on February 22, 2009 at 6:09pm
Hi Nate, what an honor and privilege to be able to fish with such a legend in Ice Fishing!!! Sounds like an incredible day on the ice to me--just being able to absorb all the awesome information one on one makes for a fantastic trip of a lifetime!!!

Comment by John Sheehan on February 21, 2009 at 5:23pm
Just got back from ice fishing to see this. Man, you are lucky to have an experience like this!I read about Dave Genz in In Fisherman.
I was the only guy on the small lake this evening .
I was out from 3:00-6:20 pm and the fish started hittin around 4:40.I only cut four holes and only one hole produced. Caught and released small fish 3 Bluegill 1 Bass and 1 Crappie.

Comment by Bill "Musky" Modica on February 21, 2009 at 4:03pm
Dave will be here in Antioch tonight......and fishing the NAIFC tourny in my backyard tomorrow!

Comment by Bruce Condello on February 21, 2009 at 1:50pm
Wow! I'm really jealous. What an interesting report.

"   Thanks for the reply Jeffrey, every time we take the boat out, my wife asks if I have…"
13 hours ago

"Evening John, I got introduced to cane poles as a child and I have never forgotten how much fun…"
16 hours ago

"The markings on this Fish are quite striking !"
yesterday

"Thanks Jeff ,i am stymied as to why the fishing at this lake doesnt seem to be as productive this…"
yesterday

"   Jeffrey, just wondering how much of your fishing is done with telescopic gear vs.…"
yesterday

"Very nice Slab John….the wind has been a challenge here too for several days since the…"
yesterday