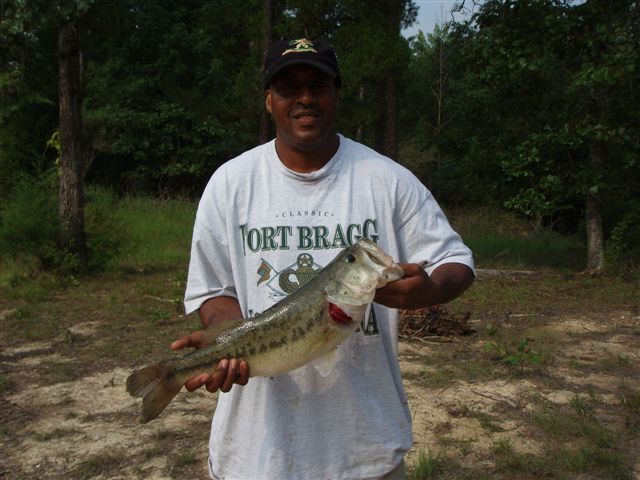 Iteago L. Felton has not received any gifts yet

What type of animal is a bluegill?
It's a 1/2 acre on a 25 acre farm, bought for my retirement from the Army!

What state are you from? This can help us get together for fishing trips!
Georgia

That's a great picture of you and your wife!  I'm sure she'll be glad when April gets here and you make it home - guessing you'll be glad to see her too.  That's a nice-looking bass too - that's funny that you had a pet bass - stinks that someone caught him.

As far as a ball-park figure, you should be able to get the expansion done for somewhere around $10K, maybe less than that.  It just depends on the guy you talk to, whether he's a good guy or someone trying to gouge people.  You might ask him if some of the clearing work could be done by an experienced dirt mover you know, see what he says.

Forgot to say, an extra acre will make a big difference, give you a lot more water which translates to a lot more carrying capacity, i.e. a lot more big bluegill you can grow in the pond.  I definitely think that would be a great first step.  And you're on the right track looking for an experienced pond builder - make sure to get someone who's built and worked on a lot of ponds, as there are lots of dirt movers out there who think it's easy to work on a pond, but if they haven't done it they're likely to screw it up.  Also, some of them charge substantially more than others, so if you get quoted a price that seems way high, run it by me and I can tell you whether it's reasonable or not.

I'm fired up to, Iteago!  I really enjoy helping people with their ponds, and bluegill are my specialty so I especially enjoy that.  If I understand correctly that you're building a house on the property, maybe you won't have as much of a problem with trespassers once you move there?  That generally makes a big difference, being there to watch it, and the trespassers knowing you're there.

You'll be my first client outside the state of Tennessee so I'm especially motivated to help you really turn your pond into something special!  I'll send you a PM with my phone number in case I haven't already given it to you - just give me a holler when you get back over this way and we'll get cranking on that pond.

Hey Iteago, it's great to hear from you.  Man, that stinks that those jerks are sabotaging your pond!  I used to joke that if I ever owned a pond I would put up a hurricane fence of razorwire around it and let a panther loose on the property and only feed him once a month so he stayed hungry - maybe you need a panther!

That's awesome that you're coming home - I'll say some prayers that God keeps you safe between now and April.  I know you have to be excited.  We will definitely get your pond in shape, get some hawg bluegill growing in there.

I do notice a couple things from the photos you posted.  The water looks pretty shallow on the side closest to where you're standing for the upper photo, the one that shows the bench and chair in the water.  You might think about getting that dredged out when you expand the pond.  Very shallow water makes it harder for the bass to control the bluegill, and it also makes the pond more prone to excessive weedgrowth.

The other thing I notice is that the water is pretty murky.  Do you still have 850 catfish in there?  That would be the one good thing that might have come from the trespassers - I'm hoping they caught out a bunch of those catfish, because that's about 800 too many catfish for a pond that size if you want to grow big bluegill.  I would suggest letting a friend set a trotline or banklines around the pond to try to catch out as many as possible of those catfish.  They will be a big problem in managing for bluegill, because the most important thing you can do to grow giant bluegill is to feed them, and those catfish will eat all of the food so the bluegill can't get any - they'll actually knock the bluegill out of the way with their tails while eating.  I would almost recommend rotenoning the pond and starting over just to get those catfish out of there, but you may not want to do that.  But you will definitely need to work hard at getting them out of there.  I've done it before, most recently in a four-acre pond that was stocked with 1200 catfish; you just have to be aggressive in fishing them out.  The catfish are probably why your water is muddy - they're rooting up the bottom looking for food.

Definitely send me more photos if you have them.  Also, do you have a topo map of your land so I could get an idea of what the watershed is?

As far as keeping out trespassers, something a lot of people do these days is to install a couple game cameras pointed at the pond (hidden up a tree so they're not easily seen/tampered with).  Then you put up a sign that says the premises is being electronically monitored and that trespassers will be prosecuted to the full extent of the law.   One other thought I have is to put up an electric fence just around the pond, say twenty yards or so from the edge of the pond.  Putting it just around the pond would cost a lot less than putting it around all of your land.

Walt Foreman said…
Sure thing!  I'd be glad to help.  Two-pound bluegill are a realistic goal in this area with proper management.

Wolfed down a 4" swimbait . Had trouble getting the mouth open to get the hook out. Released fine…
yesterday
0 Comments