Feeling the increase in panfish activity in the shallows we set out again for the increased likelihood of catching numbers and Master Angler entries. The spots we recently had success were the main focus.

We scanned most likely shorelines visually…. Side scan imaging would come in handy here. Much of the shorelines held little or no fish activity or visible nesting from B.Crappies or Bass. The B.Crappie nesting we did notice had some other panfish activity along with but left these areas undisturbed.

We noticed some fish suspending underneath docks. The docks that held the most numbers of fish seemed adjacent to deeper water and weed edges. We pitched our jigs and floats next to or underneath a few of the docks and were well rewarded. The best B’Gill was tagged by Earl on a good pitch underneath with a swim jig.

We eventually called it and decided to move to the areas with larger known quantities and less effort per fish.

Easing into the spot with the electric trolling motor we noticed hoards of above avg sized fish cruising the tops of the shallow sparse weeds. They proved to be easy targets with the tiny swim jigs. We caught one fish after another with many +90 percentile fish. These are fish that are within the 90 percent of Master Angler Certificate which are lunker quality… trophies to some.

Much of the time was spent sight fishing cruising schools or solitary fish cruising thru the weeds. I needed a slowly sinking or near suspending type of presentation without the float. Here is where I like the Jelly Jig or my own tie Spring Cricket produce… these jigs spend more time in the strike zone with a slower retrieve. Sight fishing with the neutal colored Spring Cricket proved difficult so I added a visible indicator on the tip of the hook comprised of a cut segment of a pink waxie. The small segment offered visual connection while being retrieved in front of fish. Pink Waxie disappeared FISH ON!

I also had the chance to try Carl Hendrix’s Rascal 2.0 and was rewarded with a good number of premium sized fish. With the 3# Nano I was able to actually cast this fly a workable distance. Good work Carl!

We exhausted the activity in this area after catching many quality fish and Earl just missing a Master Angler Certificate with a P’Seed at 8.7” or .97 MAR. We decided to move to a different known hotspot while we had some sunlight left.

We continued success with the swim jigs making long parallel cast with the shoreline and tagging many B’Gills in the +90 or 9” range. We were impressed with the overall avg sizes of the gills being caught. We fished that spot hard until the bite quit at dusk and then fished the shallow creek channel edges for suspended female crappie on the way back to the launch

By the end of the afternoon Earl and I were each working on our third limit in numbers of panfish being caught. No dinks in the bunch today and most fish were 80 percentile or over in Master Angler Rating. All fish were CPR’ed 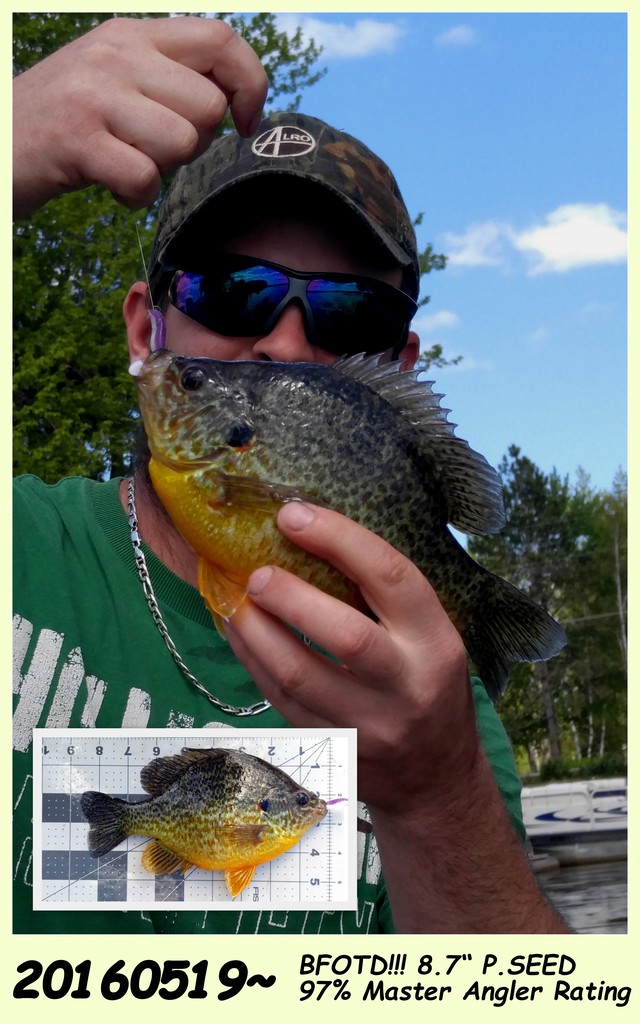 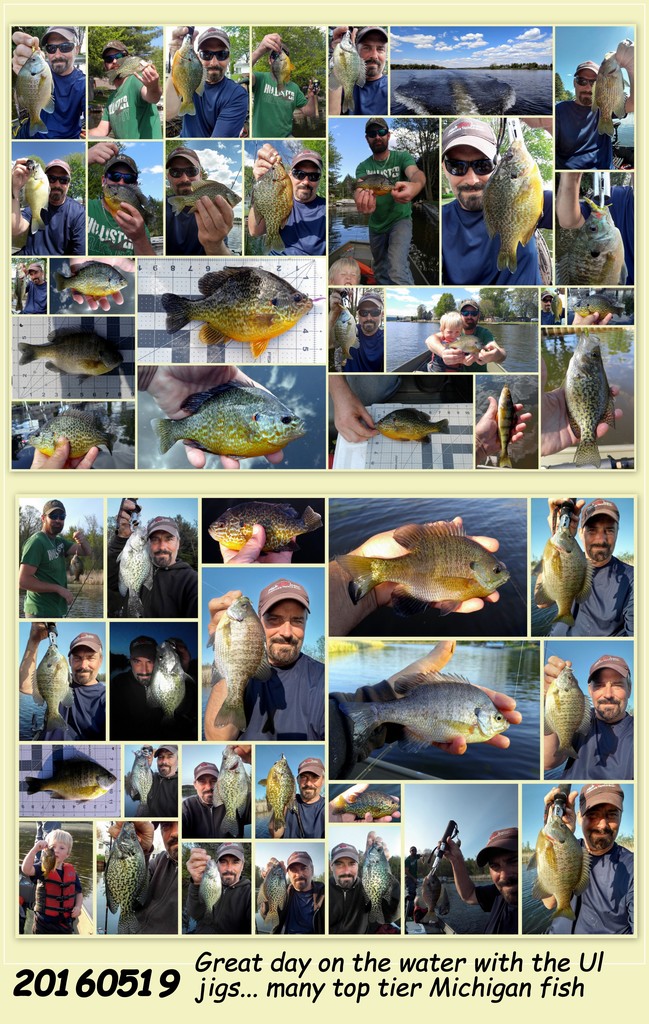 Launched at a private site in 70.0° water and hooked up straight away with a nice 8.2” P’Seed with some beautiful coloration. Long casts parallel to shore with a swim jig then had a blast hooking up with above avg sized gills casting the Spring Cricket for the remainder of the afternoon pitching into tight pockets and along laydowns.

Also tagged a pre-spawn female B.Crappie in the 12”+ class. 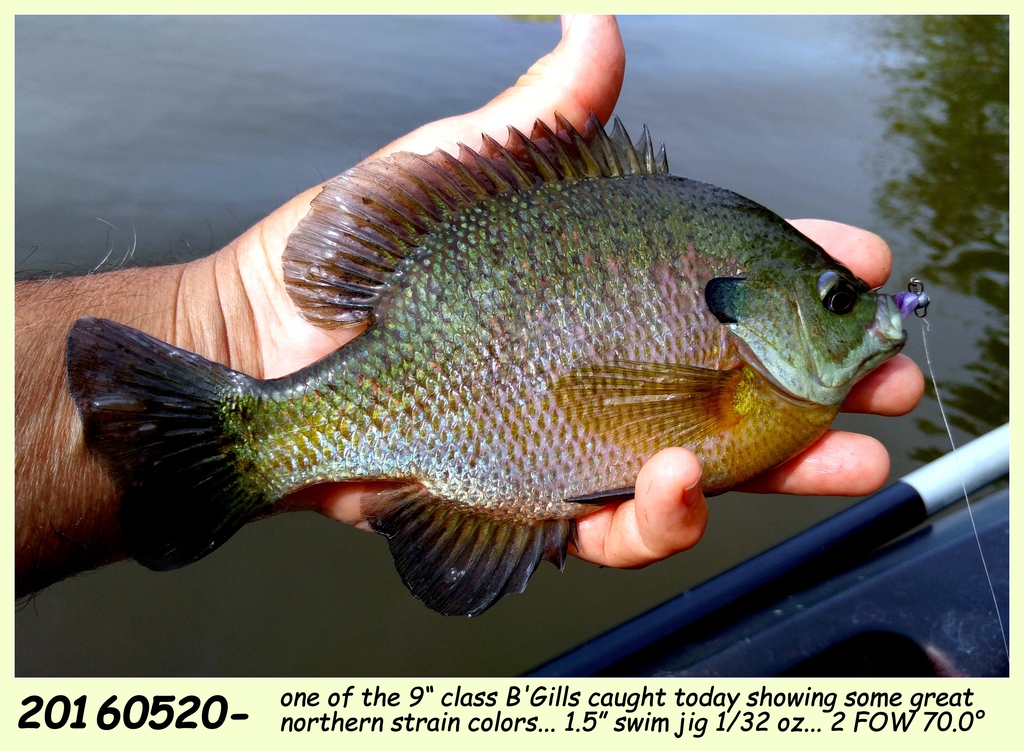 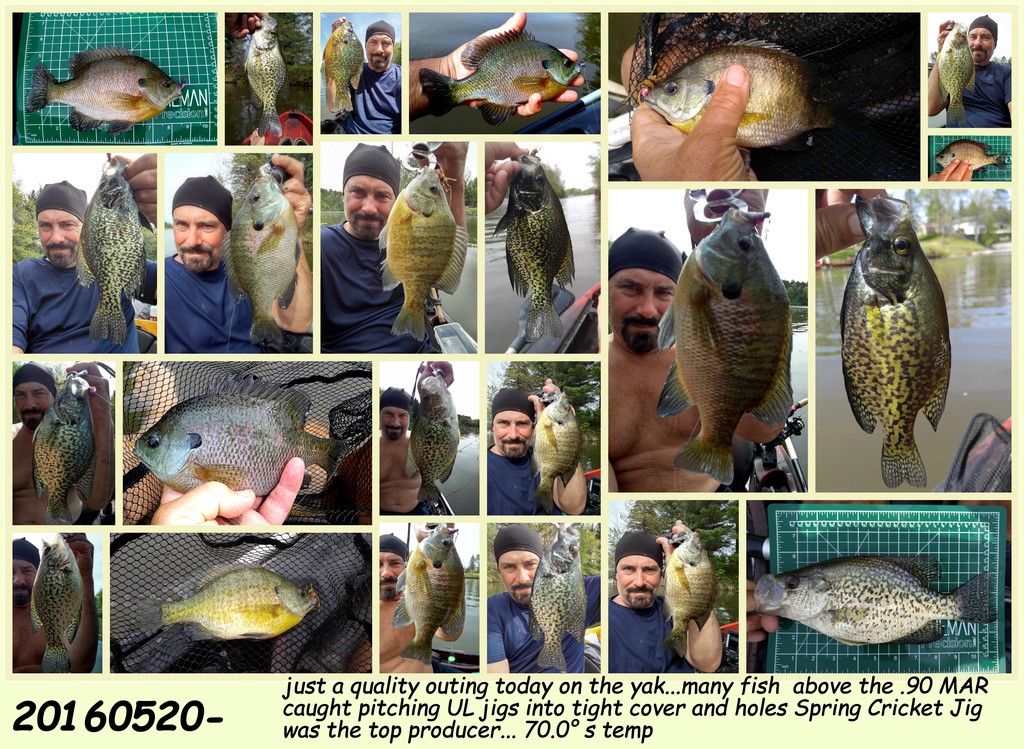 …what an explosive day on the water!

With exceptional warm summer like weather I towed the yak back down to the lake at one of my few access points. I was greeted with sunny skies, light variable winds and the shallow flats full of hungry fish! Water temp at the launch posted 70°.

I paddled to my first spot and tagged a quality B’Gill on the first cast on the Spring Cricket… a great start! I came rigged with a slip float setup with a Pink Waxie and 2 jigging rods. One jigging rod with a swim jig and one rigged with the spring cricket jig.

The bite was playing out a little differently today … few bites in the open water with the swim jig. The fish seemed to be tucked in close to shore under a floating mat of cut weeds and algae bloom. The slip/float with a single hook and pink waxie cast into opening s in the slop proved to be effective in methodically tagging them.

Pitching the Spring Cricket jig along the edges and into the openings also proved effective.

A monster P’Seed near Master Angler proportions was also tagged on the slip/float and Pink Waxie.

i also tagged a bonus 13" Y.Bullhead at .92 Master Angler Rating on the Spring Cricket Jig! 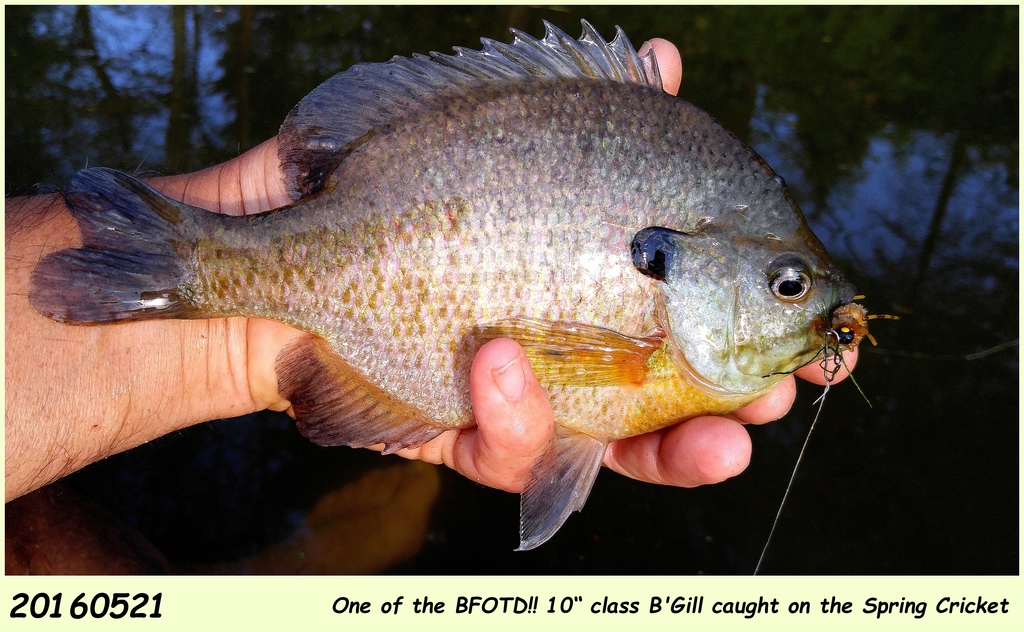 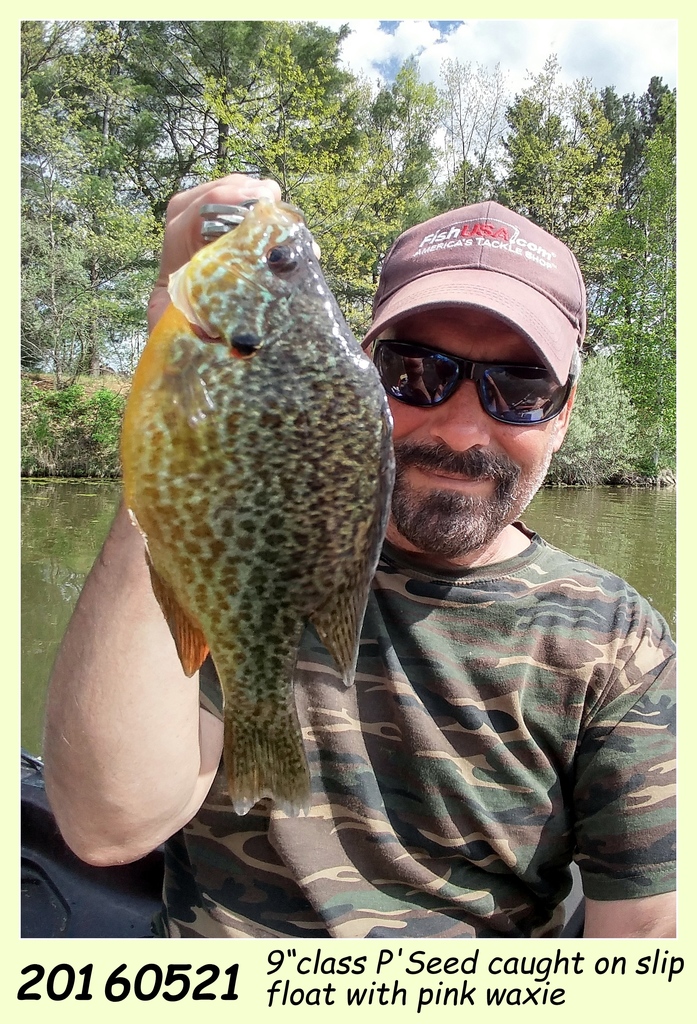 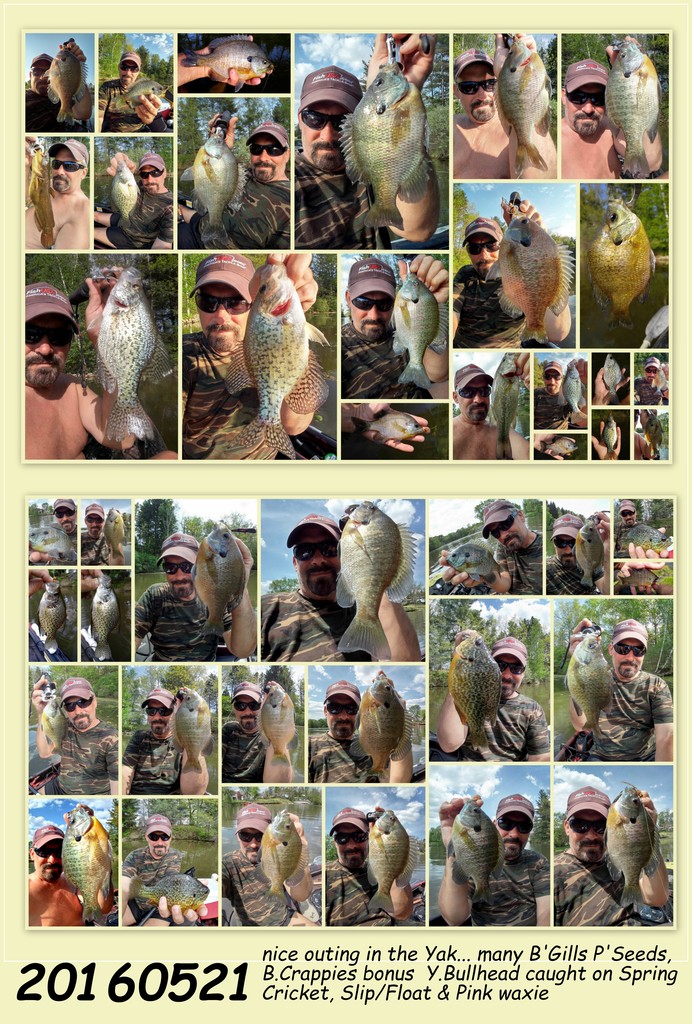 ……sharing my set-ups for yesterday's personal record breaking trip... cause that's what i like to do.... :>) 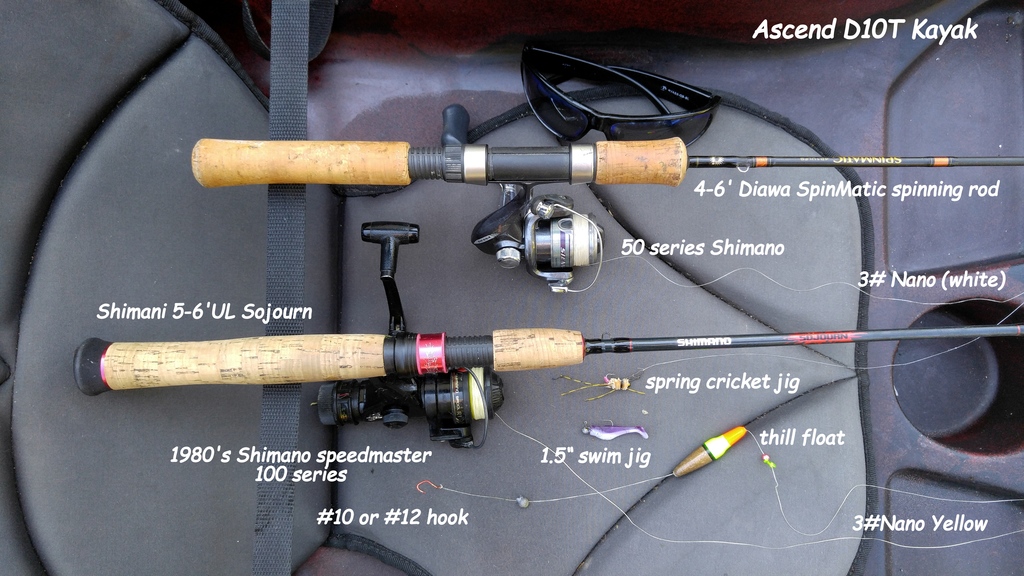 …still reeling from that great day on the water yesterday! full of aches and pains today but still feel the need to get back out there on the water some how.

yesterday i noticed the carp in the shallows spawning... its that time of year to tag a Master Angler. i hope to catch a few and procure a certificate.

water temps hovering in the low 70s and the full moon... i need to take advantage today on that fact alone... and the next few days.

Thanks for the fine reports from your area.

Two things...  I'd sure love to buy some of those Spring Crickets, and come on down to Alabama and help me catch some HUGE Bluegills.

Welcome Riverman... thanks and your welcome!

haha...wish i could leave these Michigan borders for some bigger southern gill. locally 9" is a lunker way up here in the North 10" is a trophy needle in a haystack.

"Thanks Jeff! We were told by several sources up there that we did well under tough conditions,…"
5 hours ago

"Thanks John…..looking forward to get back out after this storm settles down…."
6 hours ago

"Lunker! This year is the first use of the Ned rig for me . Got some smallmouth and Rock Bass and a…"
6 hours ago

John Sheehan commented on John Sheehan's group Multi Panfish
"I have thought "Jack Perch " to be a Southern term for Jumbo Yellow Perch but this week,…"
yesterday

"That’s great news…..this gives you so much confidence when fishing…..enjoy Jim…"
yesterday

"Wonderful Jim……..that’s why we fish…..never know what the next cast has…"
yesterday

"Thanks John….that’s what I was thinking…."
yesterday