I had a tought time getting out on the lake as usual today… same old thing chronic pain in the legs and arms…took a ride instead for some bait and terminal tack instead.

I finally made it out on the lake in mid afternoon and started the action with the slip/float/fly/waxie in about 1’ FOW next to the bank under the overgrowth and on the shallow edge of the slop. It was a large fish thinking LMB as it tore thru the weeds and lily pads… finally got it near to the boat and it appeared to be a huge catfish in shape. As I eased it into the net it was a Master Angler proportioned Bowfin. The fish was halfway into the small net as I slid it on the deck of the kayak. This is when the wrestling match began as I was trying to get the fish grips into the its tightly closed mouth. The fishes length was easily over 30”. With some brute strength and slippery nature the fish finally flopped into the water without a photograph or official measurement!

I left the shallow flats with just one more p.seed bite and headed for the road and bridge rip-rap. A few casts in I tagged a SMB that thru the hook and a few mid sized crappies on 1/64 oz swim jigs. Not a good start but I felt it was getting better.

Earl spotted me on the lake and proposed a jon boat trip later on a small natural lake in clare, mi

Once on the lake in clare, mi we found many fish in shallow near docks and boats and over hangs but couldn’t secure the big fish bite. We headed deeper into a 13-15 saddle area noticing the thermocline was at about 17 FOW. I tagged a decent 8” class b.gill but couldn’t find the numbers to establish a pattern.

As dusk grew near we worked our way shallower hoping that we were following the fish in. earl tagged a small n.pike and a LMB on the swim jig and I concentrated on the slip/float/fly/waxie and continued tagging many 5-6.5” fish… too small to post. 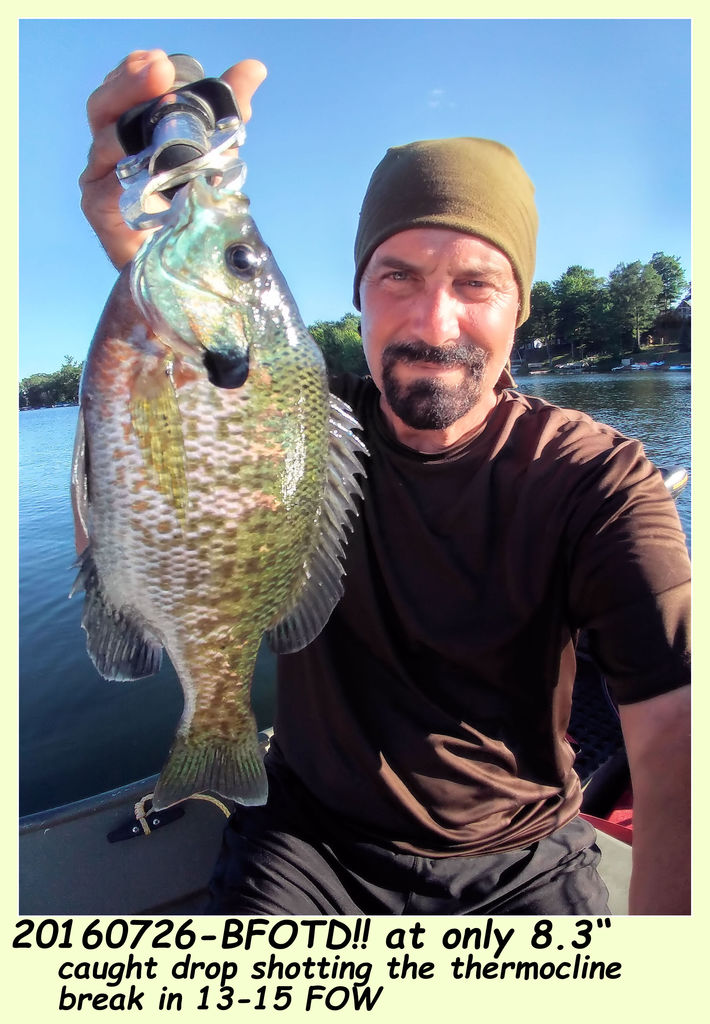 ...some of today's catch all CPR'ed 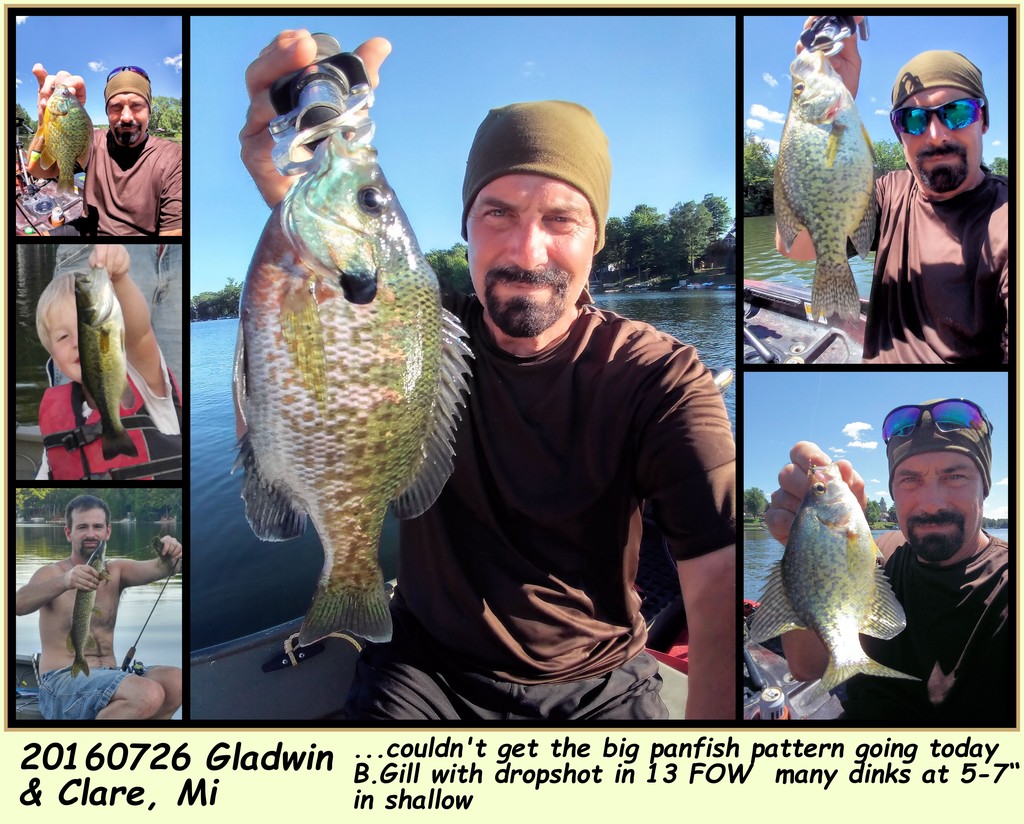 20160727-launched the jon boat an hour before a storm was going to hit the area… watching the storm from the accuweather initially was going to be less than 45 mins long and mild. As time was spent on the water the t’storm was growing in intensity and size. I took shelter under the bridge and endured 90 mins of fierce thunderstorm with strong sustained winds and white caps. The storm lasted ninety mins… 30 mins of which the wind subsided I was able to actually cast a line and tag a few b.gills and crappie. Slow bite but it passed the time.

Had a tough time developing or finding a pattern of fishing for the panfish. Drop shotting was proving fruitless as a presentation even though I spotted them in 15’ FOW.

I decided to hit a large shallow weedy flat in 84° surf temps and started tagging numerous panfish, crappies and gills. The power minnow tagged a nice Channel cat and a bonus LMB. Slip/float/waxie was the presentation favoring the b.gills. 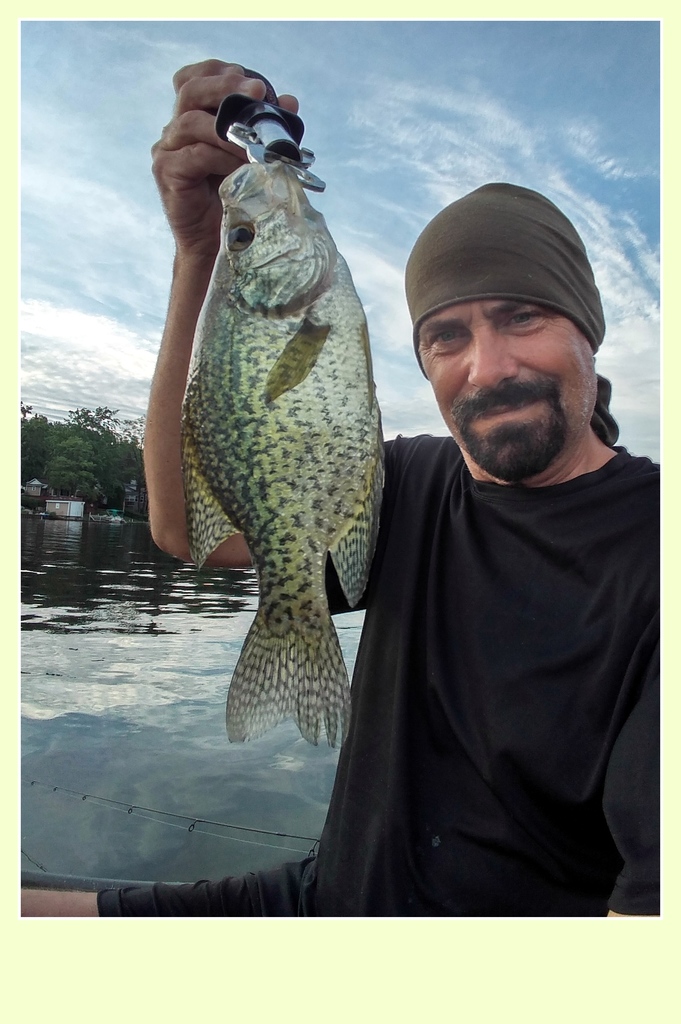 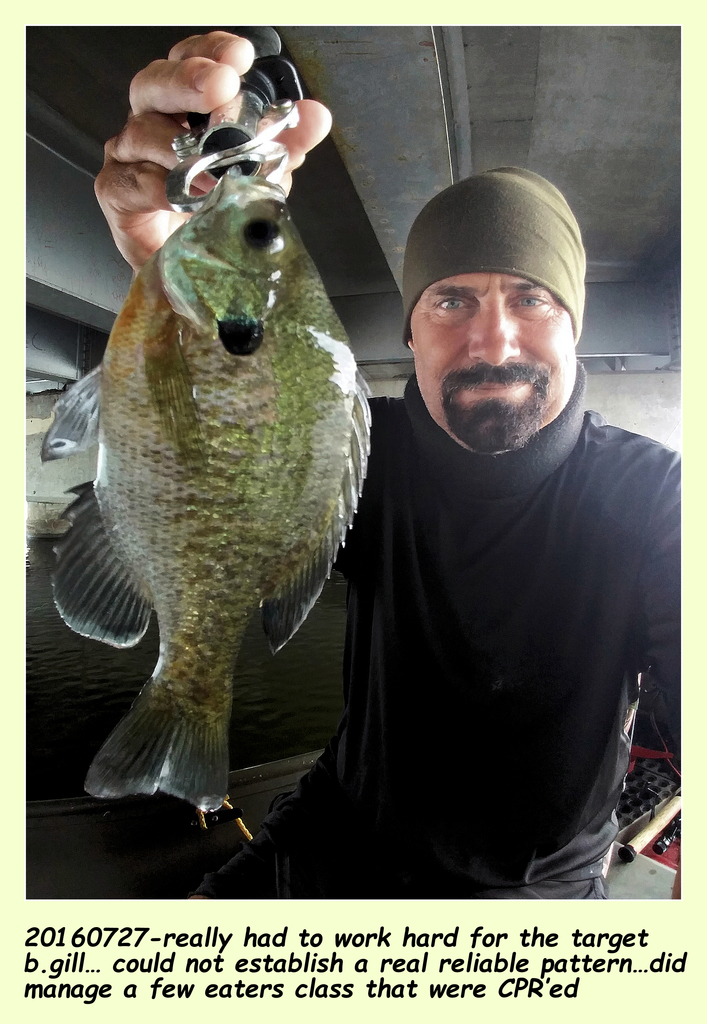 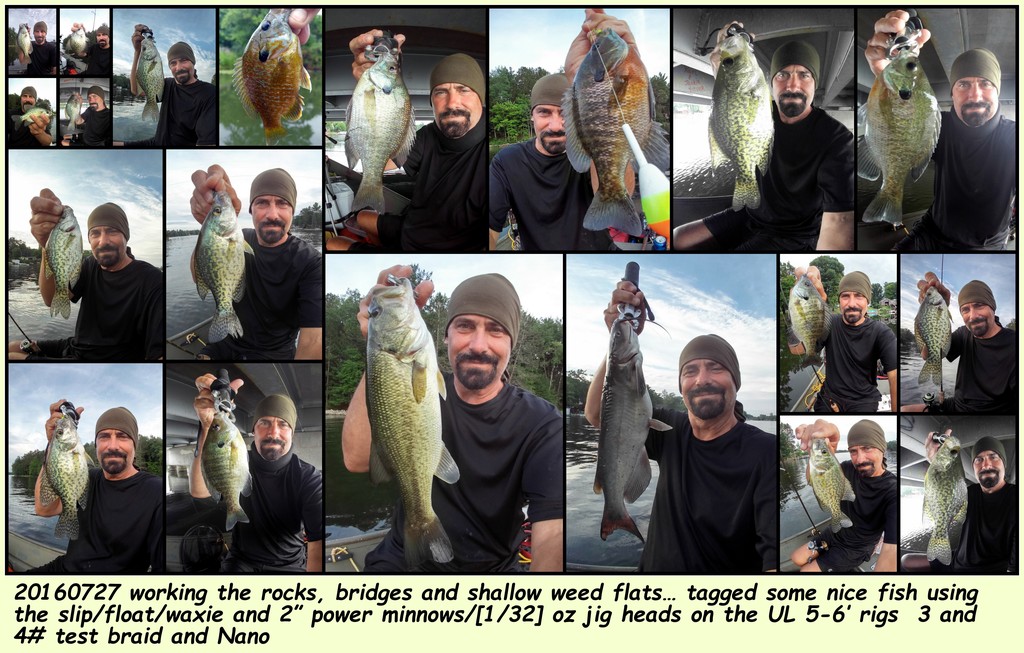 We found hot sun calm winds and mid eighties water temps at the launch. The hot searing sun was going to be tough to get thru in the jon boat. Sometimes it seriously becomes an oven.

We picked up where we left off the day before with a bite but the fish were significantly smaller in size and quality. I showed a couple in the collage for size comparison.We decide to come back later as the sun settled down.

It gave us time to investigate some areas with the sonar. We found many fish at large weedy points extending to abrupt drop offs in deeper water. Testing the bite with dropshot, jigging and slip/float/waxie rigs we found many good bites with a few gills over 9” mark but smaller eater slot crappies.

As the sun set behind the treeline the bite became significantly better producing another bonus channel cat on the slip/float/waxie.

Connor was in training on the “dock demon” spinning rig and was tagging some nice 8” class gills with the slip/float/waxie chartreuse in color. Chartreuse became the hot color in the waxies and finding that is the case during the hot sunny weather.

By the end of the afternoon and waning sunlight the edge of the grassy point became the productive spot with nearly a 2 fish a minute pace with the 2” power minnow being one of the top producers as well as the 2” Apex swim tail in purple.

Toads of the day: 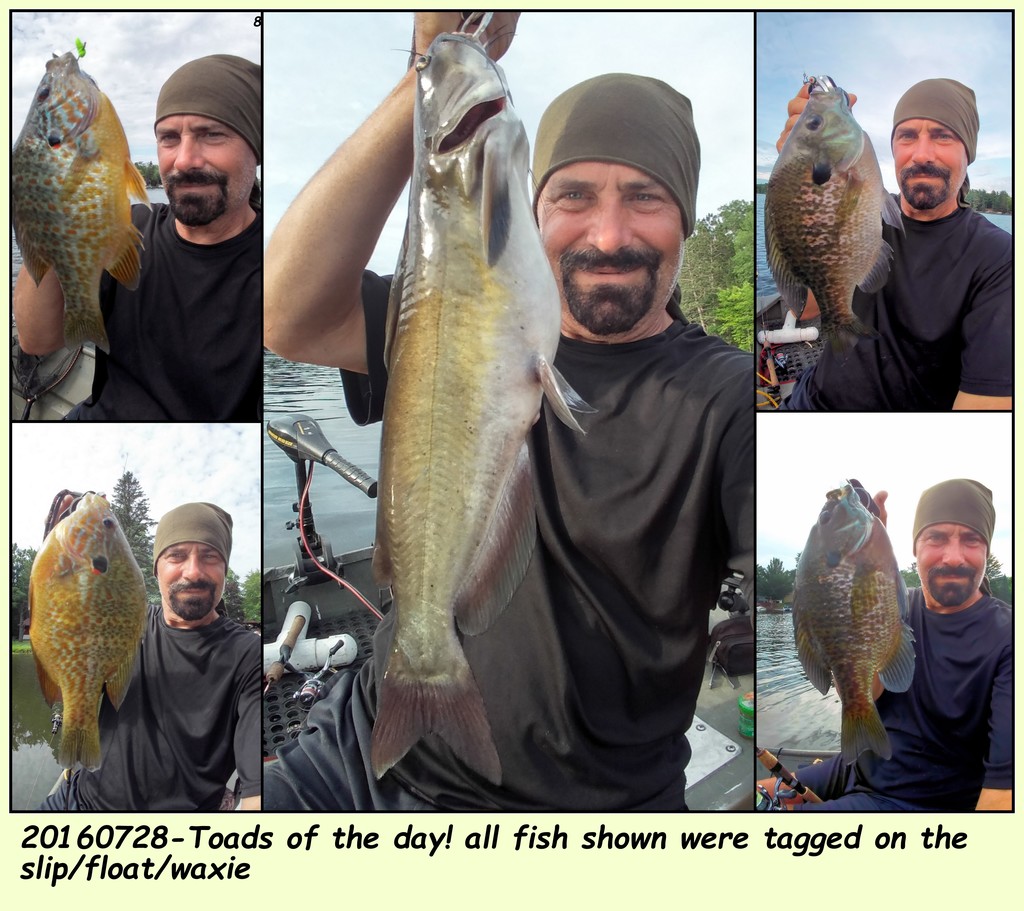 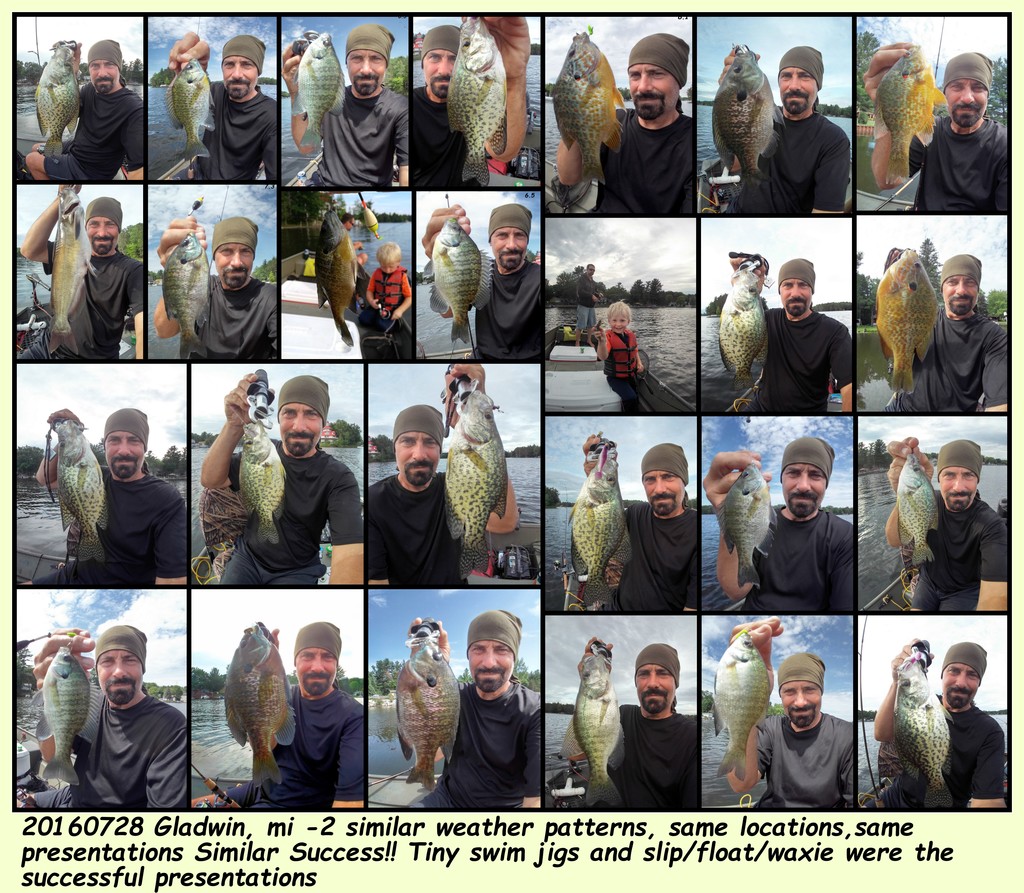 20160729---I couldn’t get my lead legs moving all morning … finally in the late afternoon grabbed two UL jig rods loaded with 1/32 oz swim jigs tied to 3 and 4# ice super lines and walked to the lake to make a few casts from shore. I was rewarded nicely with 2 SMB out of the first 3 casts and then many crappie topping the 13” mark. I was really surprised by the quantity of fish since the location has been more miss than hit lately. 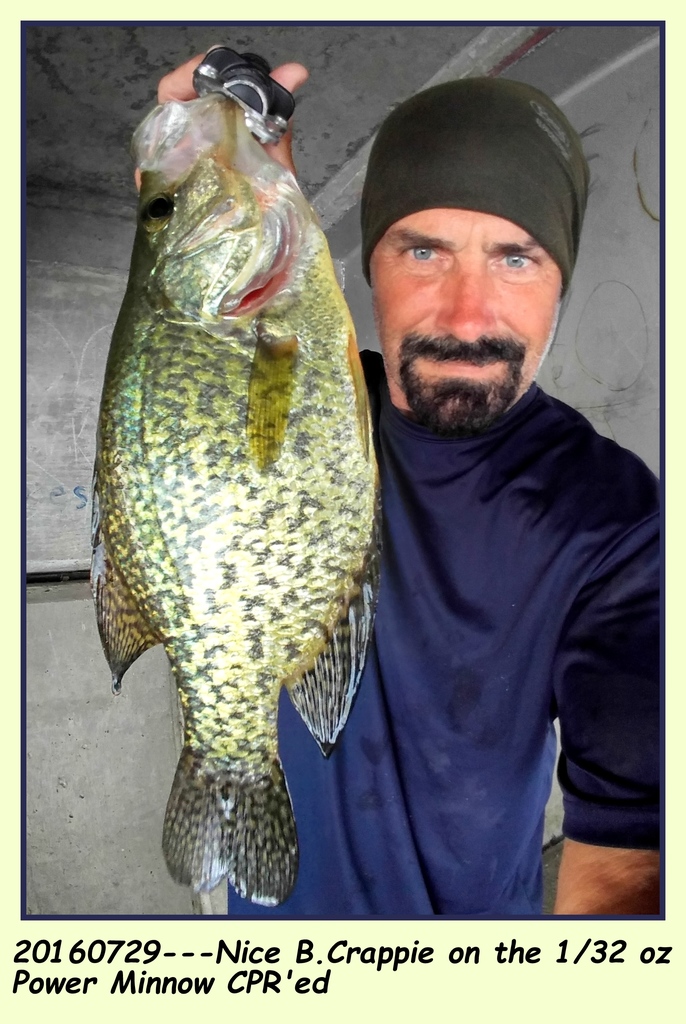 Some of the fish caught this afternoon:

spent an hour casting from shore this morning with just one hit from a r.bass that insulted me by shaking off the hook before the snap was taken. the only difference from yesterdays bite was the stronger cold front wind from the north may have shut them down or they completely moved from the area.

Arrived to the designated lake on a beautiful day got the boat ready to launch and found out from the locals that it was just sprayed for weed control. In my experience the treatments effectively knock down the fish activity.

So no safe swimming for a few days… we decided to fish anyways and test the water. Fishing bite was way off but found a few quality fish with many casts… not great for kids.

After a few phone calls we decided to hook up with some friends on another lake nearby… packed up the boat and relaunched on new waters. Had so much fun reuniting with old friends forgot about fishing. We made a few casts off the docks and caught some quality fish in heavily used water.

Tagged some nice gills with the Spring Cricket, Tabbert jelly jig and the power minnow… drop shot also produced a few fish. jeri got in on the action and tagged a nice b.crappie her fisrst fish of the year. 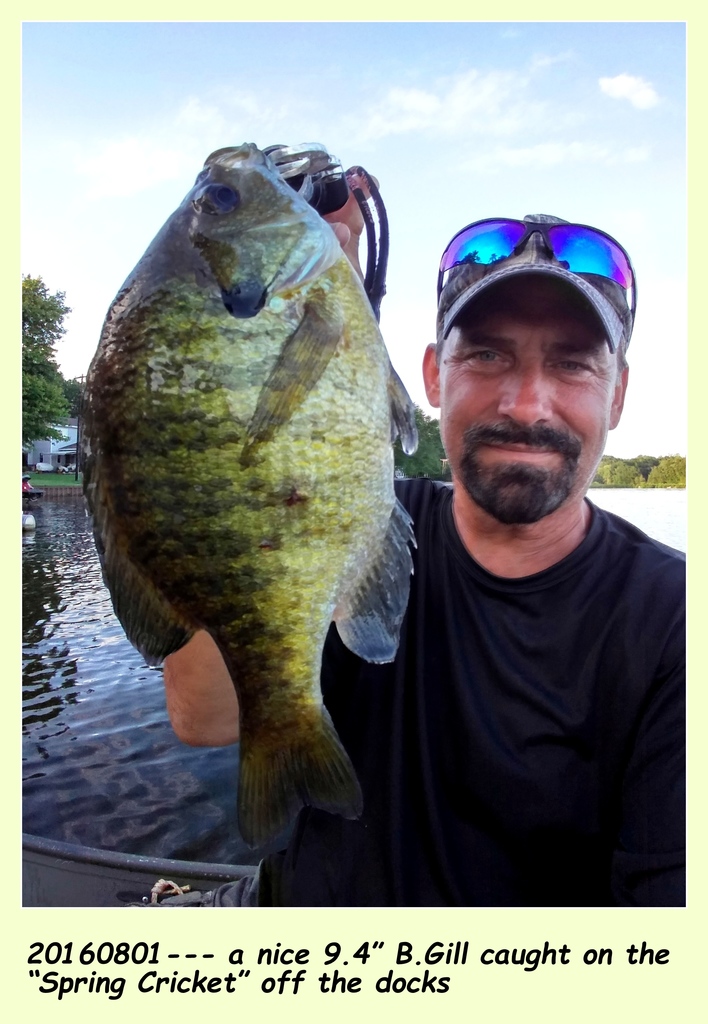 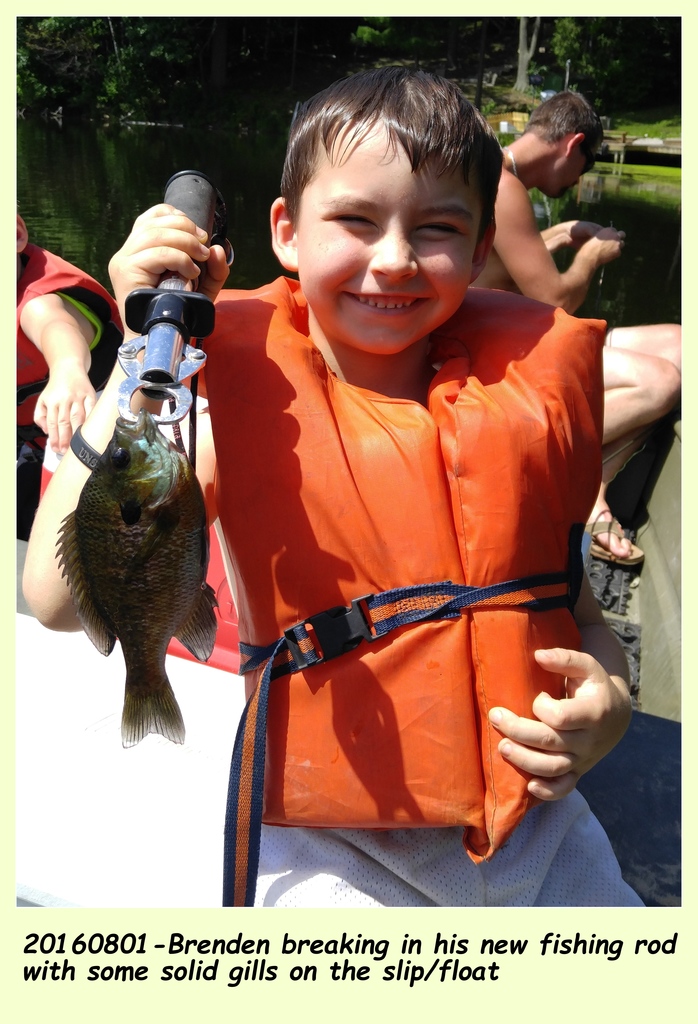 Some of the fish tagged today! 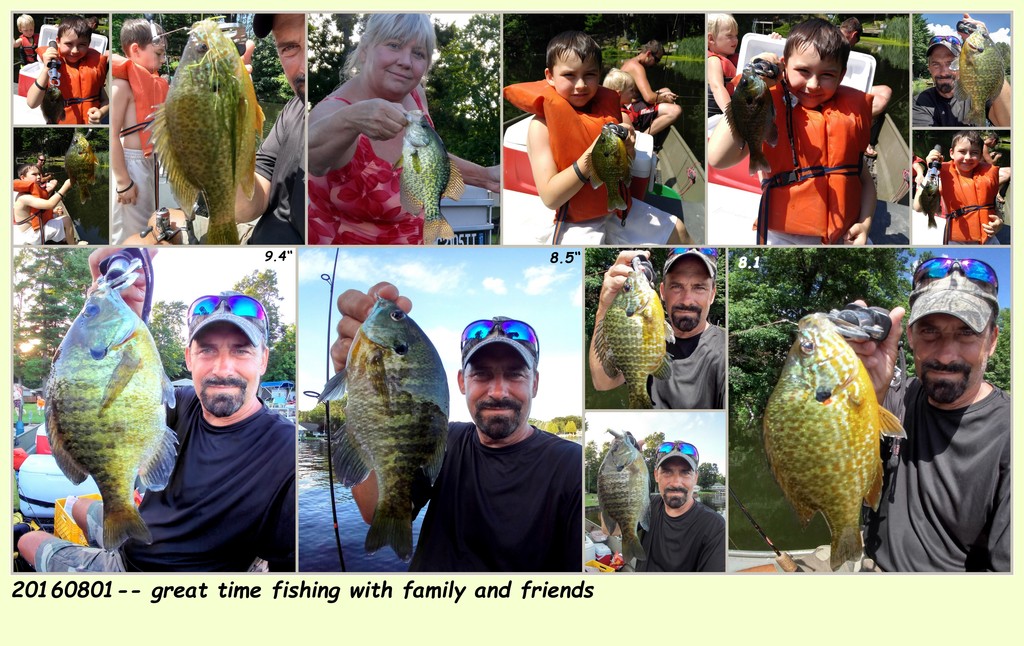 Jeffrey D. Abney replied to Slip Sinker's discussion 2018 Master Angler Record Breaking Years back to back 2017-18 Slideshow
"Nicely done Slip......these are all great fish in my book!"
4 hours ago