Went out on the lake in the mid afternoon heat & sun… why?... because fishing is tough… im always striving to get better at the sport… ive always felt fishing the tough times makes you a better fisherman… want to be a better batter in baseball, practice with the teams nastiest pitcher...sure anyone can go out there and fish the beds or the tight concentrations after ice - out… but will this add to your skill set? The summer periods could be downright tough time to fish with the weeds in full glory canopying the surface and the food chain is cranked up high. Lure presentation is tough through the weeds and the fish ar holding tight and deep or shallow in the thickest slop.

Thermocline breaks come into play as well as the deep base weedlines. Drop shotting the slop weeds in shallow or drop shotting the weed base or the breaks are my go to methods of presentation.

I started out shallow and found fish straight away… but quite a few dinks in the 6-7 Inch range. Lost a few hawgs fishing thru the pads… they just pulled free. It’s a problem fishing this style with the short rods and flips to open cover and pockets. Long poling is out for me especially in the short kayak but could possibly add to the tally. Just my preference… I like the bend in the rod and the crankin comin in… large part of the sport for me.

Never really made it out to the deeper areas… only gets to about 10’ deep in this large expanse. When I started hooking up with the bigger fish that were pulling free I stayed put and finally landed a bragger p.seed, beautiful in coloration Launched the jon boat in the cloudy skies and mid nineties temp… rain just ended and water temp registered a blistering 83°. I continued past the shallow weeds and pad field and thought I would start out deep.

Sonar showed some fish suspended off the lip of the deep holes. My initial target and method was drop shotting for the b.gill. my sonar reading experience told me they were crappie… I put down the drop shot rig and picked up the UL jigging rods with 1/32 oz heads and Power Minnow bodies… light and dark shad patterns only matter to me.

The first cast was over the hole and retrieved halfway up thru the water column. This cast produced the best fish of the day at 13” class. I continued casting and caught many quality fish between 11 and 13 inches. The fish were heavier and longer than last year at this time period. I marveled at the above avg quality. Benefits of catch and release angling? I like to think so.

Thru the many crappie I caught and released tonight I have to wonder how close I was to tagging that elusive 14” er. As each fish passed over the gunwales the anticipation of hooking that fish grew.

As dusk approached the bite slowed down and I headed home content. I thought to myself I needed to come back and fish this spot at night possibly when the big ones prowl. 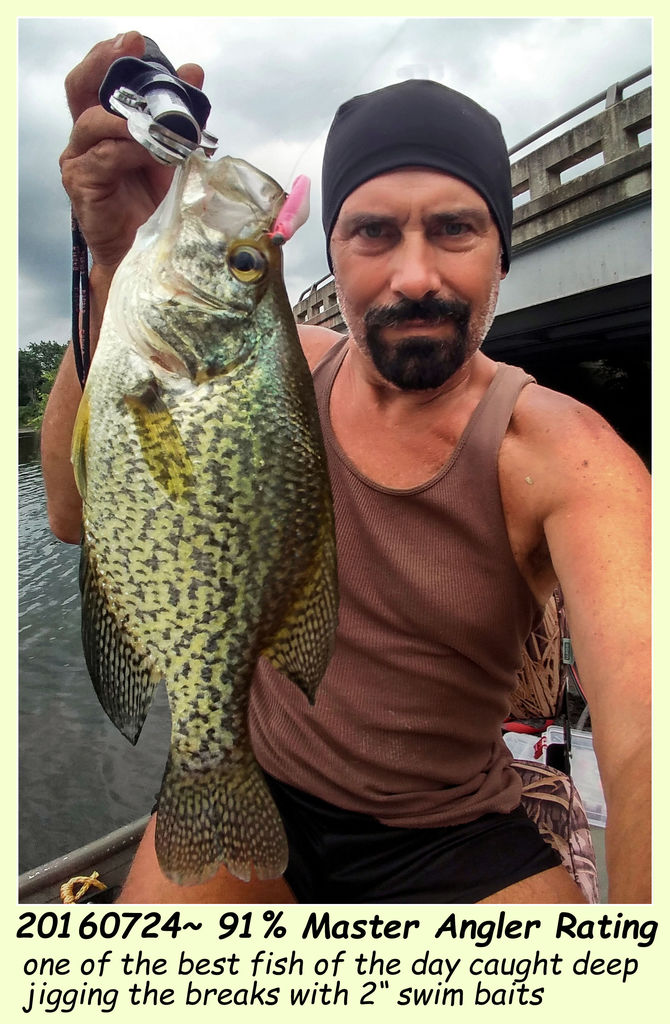 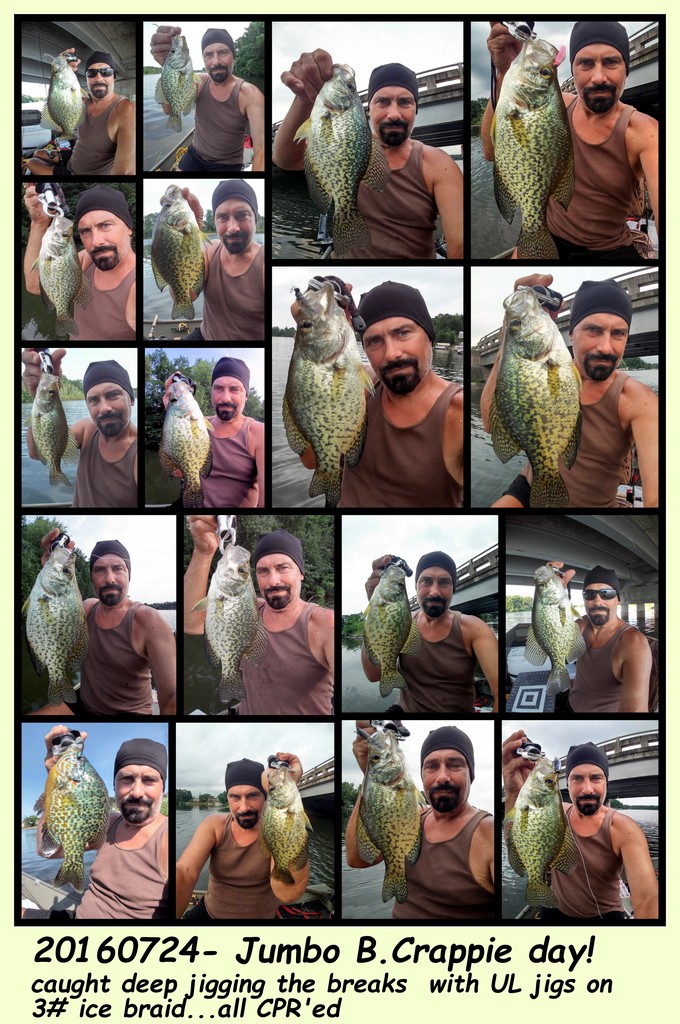 I really should have tried to get my yak out after dinner.  Ended up wet-wading at county park about a mile from home.  Tiny Torpedo.  Missed several bites, and had a couple brief hookups that ended with long-distance-releases.

thanks Allen!... very rarely nowadays do i take the jon boat out... i had access to a tow vehicle so i took advantage of it.

its nice you have a spot to wade... i miss that

going to try to shake things up tomorrow and try a morning or at least mid-morning bite. because of chronic back problems and pain morning has always been a no-go

Am in southern Illinois visiting my oldest son. We had good luck with 30 some bluegills kept, nothing big,we started just after six in the morning. Bite was good till about 10:00, an hour after the sun burned off the fog, then slowed each hour after till we finally got because of the heat at 1:00.

Gulp Alive Hellgrammite's, mini cranks took my fish. My son caught his all on worms.

looking forward to the morning trip... cant remember the las time ive been out early

Jeffrey D. Abney replied to Slip Sinker's discussion 2018 Master Angler Record Breaking Years back to back 2017-18 Slideshow
"Nicely done Slip......these are all great fish in my book!"
4 hours ago