20160419-We made an unscheduled stop to check the shoreline bite from the lake access site. Found a hot B.Crappie bite taking the long casted UL jigs past the spooky schools. Jigs and floats have proved least efficient for us when casting these shallow schools… THEY SPOOK THE FISH when float splashes down and dragged. Personally eyewitnessed this the first couple of outings.

Glad Earl had a couple set-ups still rigged in his vehicle. 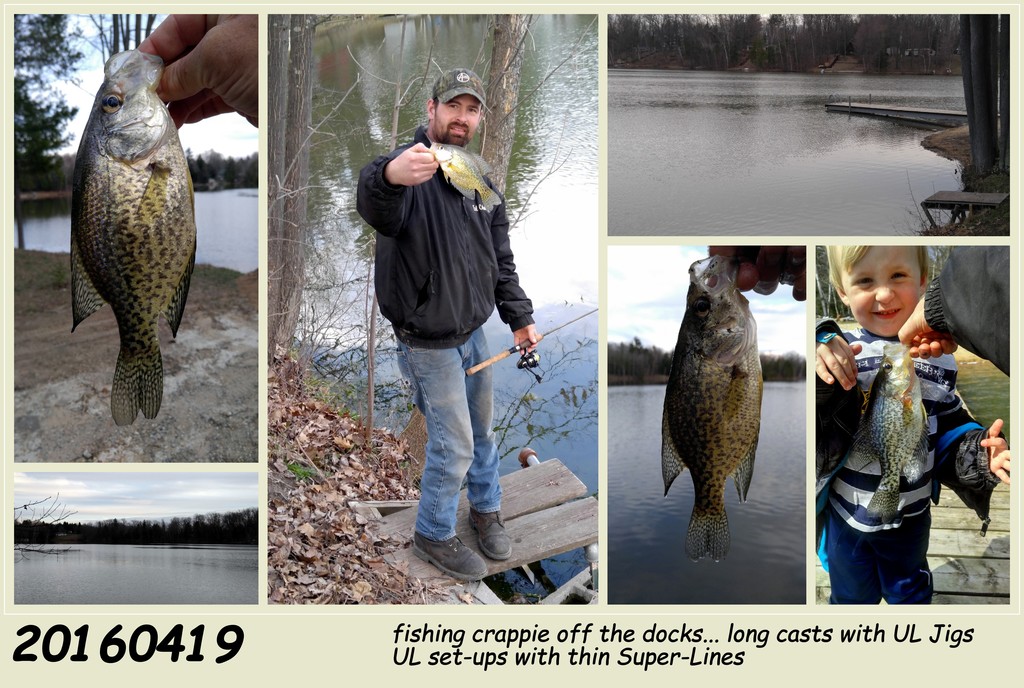 20160420… Earl and I decided to fish the closest access which is the DNR launch site 4 (mi) s from my home. We were fishing the mid afternoon to near dusk bite.

We will continue fishing the techniques that have proven to us so far this season in this pre-spawn period. UL set-ups throwing the small 1.5 – 2” plastic bodied jigs tight to cover or long casts in shallow water schools on flats. Our retrieves varied from slow twitching to med fast swimming all depending on the fish mood and hook-ups.

Slip floats with live bait for B’Gills tight to cover hopefully we’ll find some floating debris stacked against the northern cuts and bays.

We were greeted with a near empty launch and pulled up to a dock and parking of our choice… very tough to do during ice fishing season or open water season. Parking is usually full in this ample lot. Seas were calm with slight to variable ESE wind. Water surf temp mid to upper 50’s. Water was near clear with a slight brownish tint. Air temps were in the low 60’s with cloud cover.

When I am having success in fishing I continue on that path till it quits producing or it is not as productive as another technique during a particular fishing period. So we headed out to a cut I experienced a 200 crappie outing with similar water temps and period. One other boat w/fisherman on the water. Before I had the boat positioned and my anchor down Earl was connecting with Mr. B.Crappie and had 4 or 5 in the boat before I got my first hit. Action was that fast and quick paced. Water temp in this cove was a few degs above main lake temp at 60 degs.

It is important to note that crappies spawn once temps reach 57 degs the water warm-up locally was so quick the fish were slower to respond … there were no males caught in black tux spawning colors so they were not at that point. I conservatively choose not to fish the spawns generally and will pursue other species instead.

So after over an hour of non-stop crappie action with a few B.Gills here and there we decided to leave the spot and pursue some concentrated B.Gill schools. We decide to come back to this spot to test the later bite hopefully for some trophies.

So we continue into a shallower sub-cove locating the B.Gill and discover quantities of spawning shiners up to 11” catching them on slip-floats… some quick fun but not what were ultimately looking for. 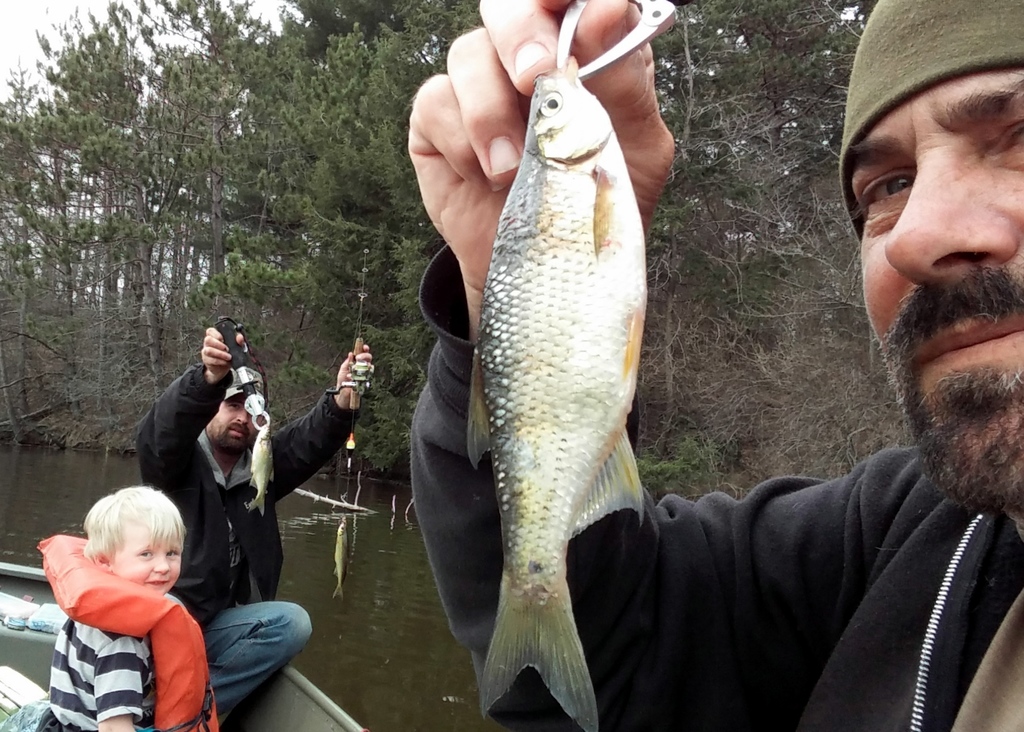 After scouting yards of shoreline, stream openings, flats and culvert drains and ending up B.Gill-less we decided to head back to the hot spot for some last casts… I then hook up with my BFOTD!! A 12” class chunky female B.Crappie (wish I had a scale) on a twitched 2” Power Minnow in a shad pattern 1/64 oz jig  attached to 2# Ice braid. 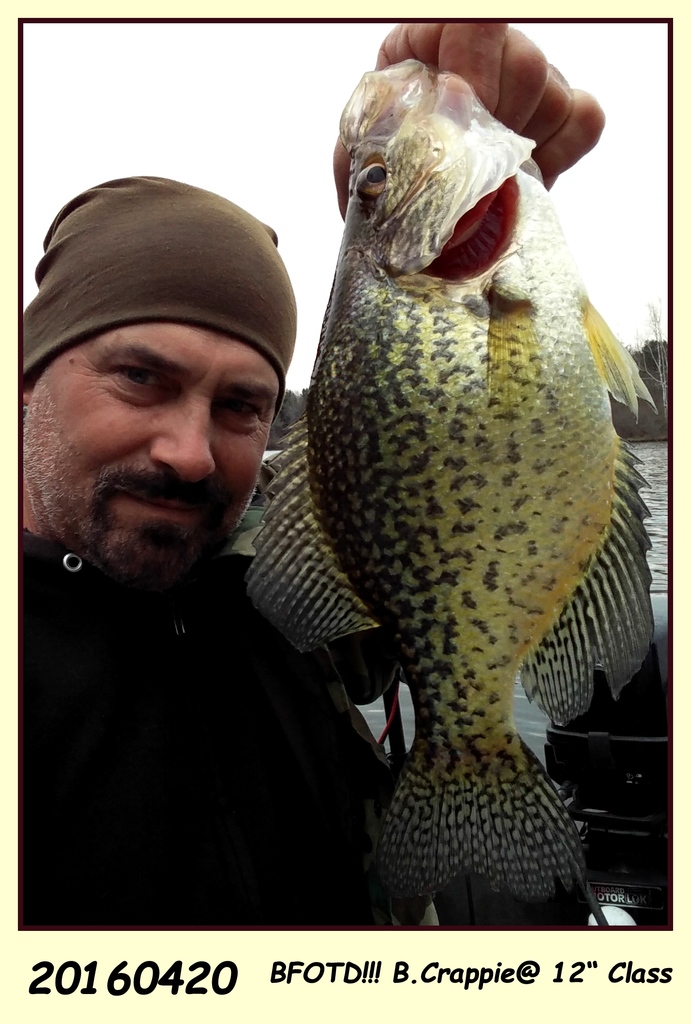 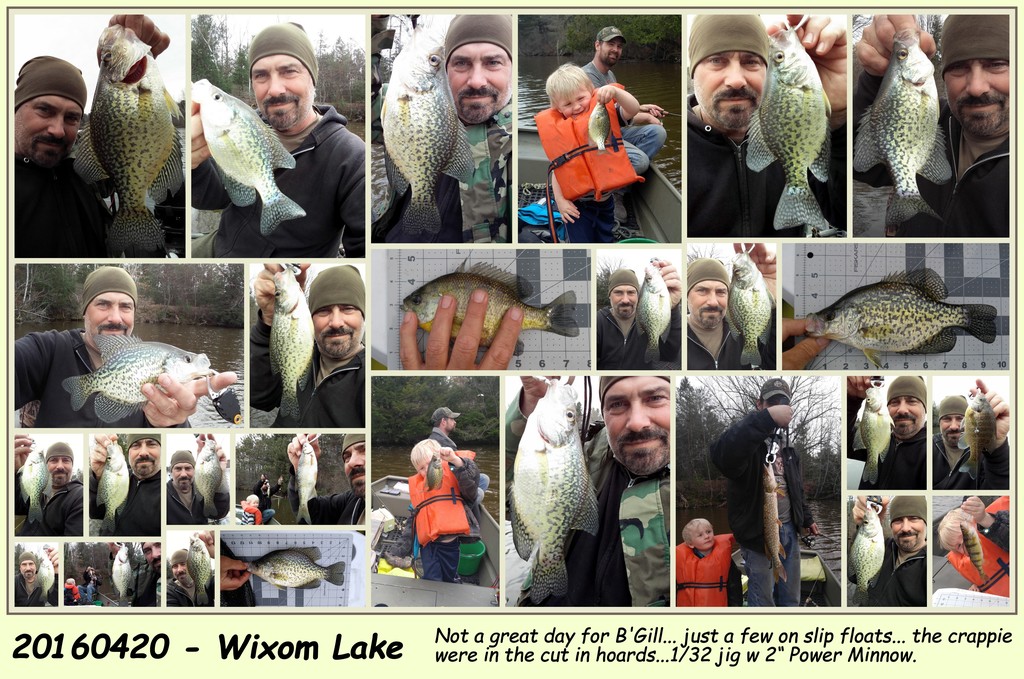 I'm surprised the Crappie were spooked by your float!  That nice Black Crappie I caught on Sunday hit a float rig, and it hit the rig within seconds of it splashing down.  The jig was only about 12" below the float, too.

I here ya Allen jig under the float was Modus Operandi for me for most of my fishing years early cold water season and for many other fisherman presently. Admittedly ive never been really good at it. I’ve blamed it on its low production for me because “fish are lethargic in cold water” logic. Lately I’m finding that’s not the case. Many times I’ve seen crappies on sonar run full steam up from the bottom of the lake to greet my descending jig thru an ice hole. Now in open water we are fishing slowly falling swim jigs mostly and reeling in like its summer peak period water temps.

First outing after 90% ice-out (we still found ice on the lake) I had set-ups prerigged with slip floats and jigs along with plain UL rigs setup with 2# ice braid tying on tiny plastic bodied baits and Jelly Jigs. Once out in the 42 deg water Earl started slamming them with small swim jigs preliminarily out fishing my floated presentation at least 4:1. It didn’t take me long to switch to UL spinning, ice braid or Nano and making the long casts and swim the jigs in and catching up in numbers.

The slip float set-up was created at a time when fisherman had no other way of presenting such a light bait casting with distance and it worked…it got the bait out there with the hardware and line of the day… now we are free casting those light baits with no bobbers with very impressive distances and sensitivity with thin super lines, better rods and reels… for me the cold water float presentation is sidelined in my arsenal for now.

A couple experiences this year entailed casting slip floats into and past visible schools of fish with negative results. So I think to myself how are the fish responding to the float when I visibly can’t see the fish. the fish are frequently located in shallow clear water flats or swimming the banks. I noticed this last year after ice-out with shallow schools of fish and no weed cover they appeared skittish when floated over or thru.

Im not saying it doesn’t work… ive caught lots of fish in the past on the system… but free casting has increased our numbers of fish exponentially currently.

Scouting the panfish pulse at the bridge we discovered thin schooling of bluegill near the edges of the rip-rap. We fished tiny panfish jigs and slip/float rigs with long casts parallel to the bank. Tagged fish were caught on the slip/float rigs with live waxies and Nite Crawler bits setting hook depth at about 18” in 2 FOW. We were catching B.gills at the slow pace of 4 fish per hour of effert. Largest was a beautiful 8” class B.Gill tagged by Earl showing beautiful coloration.

Water temps at the bank registered in at 58° ...dealing with a good deal of neck and arm pain today... might not be able to make it to the bridge.

20160422- ended up taking that walk to the bridge to check the B.Gill bite…took an 8ft lt action set-up with a slip float so I had the reach over brush etc along the bank to safely land most panfish. Baited with live waxies did not receive one bite along the whole stretch. I even tossed out the tiny jigs that had the “hot bite”… nothing… no response.

The wind turned from the North and you could feel the cold front pushing thru. I settled they just were not within casting distance… of course i feel confident if I was out in the boat I would search them out and coax the bite.

A few more jig passes under the bridge exposed one lone B.Crappie on the 2” Power Minnow. 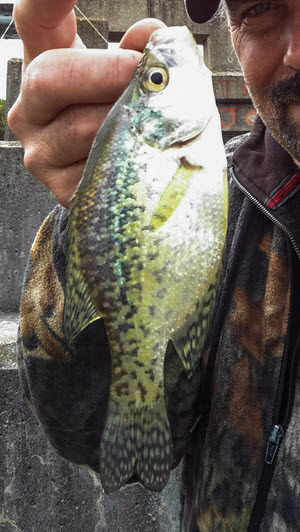 Bruce Tomaselli commented on John Sheehan's group East coast Ice fisherman
"Do you have ice in your area?"
yesterday