thanks Gary… seems like we picked up where we left off with some crappie and LMB bites in shallow water with UL jigs... water was extremely cloudy and at 45 degs warmed up to 47 by the end of the afternoon.

… it’s been two weeks to the day since the last time I felt a tug on the line… today joining me out on the lake would be Earl and his work colleague John. With snow and ice still in the shade we decide to hit the lake. Expected highs in the upper 40’s would be a heat wave considering the polar conditions Michigan has been hit with recently. There were days of skim ice on the lakes due to low single digit nights.

As we approached the boat launch we all noticed a considerable muddiness to the water. Initial water temps were in the mid 40’s. this lake is heavily fished at times but the locals were not on the lake today. Water clarity registered about a foot. The lake experiences a ice out turnover with cloudy water every ice out and it appears the BOW has just suffered its second of the season. Calm water conditions with mostly cloudy skies with chances of rain showers. We headed out.

Making our to the recent hot spots and making many casts resulted in no hits or activity from fish. I had a sinking sensation that today was not going to be successful as in the previous two outings. Felt bad for John and Earl anytime you have guests on a trip the last thing you want to experience is a skunking and we felt like lake conditions were leading us in that direction.

Earl filled John in on our recent methodology of UL fishing with 2” and smaller light jig presentations in cold shallow water and John purchased a UGLY stick UL set-up before hitting the lake. The rod was 4-8’ and a UL Shakespeare UL loaded with 6-0# mono. He also purchased some Mr. Twister curly tail grubs with pink in white bodies in line with Earl’s recommendations. Our intentions were to help John break that rod n reel in on quantities of fish. It wasn’t happening.

Discussions in the boat while we were searching the shallows unproductively pertained to past unproductivity fishing in cold muddy waters. One discussion lead to color and the basic rule is darker waters require darker baits to attract fish. I suggested black and supplied everyone with some freshly bought grub tails. We continued working the shorelines with controlled drifting with the help of the trolling motor

We found a tight pocket of fish with Earl scoring first on a nice LMB, best of the day. Then the B’Crappies starting flying over the gunwales. Darker tiny baits were the ticket for the day. Fish schools were concentrated in small areas with large scale unproductive areas in-between. For me color is not as important to presentation as it is to other fisherman. Fish location then color or most importantly dark and light shades of color.

John ended up the day with his most productive outing for B’Crappies and the BFOTD!!! With a 12” class. Having never fished UL set-ups before he enjoyed the feeling and the experience of fighting the panfish and occasional pred. he discovered some shortcomings with his initial choice of fishing line as compared to the GLISS and Nano Earl and I were using. Johns numbers of fish were a little shorter than mine and Earl’s that we attributed to as lack of sensitivity in his line. John decided to have his 6# Mono swapped out on the spool witn Nanobefore his next outing.

Combination of covering the water and finding the tightly schooled fish as well as presenting tiny black jigs with a curly tail was key in being productive on this heavily stained BOW. The two inch power minnow in a dark sparkle shad pattern was a close second in yield.

Slip bobbers produced 0 fish as well probably due mainly to water turbidity. i was however greatly satisfied with the ease of casting with thinner doubled uni knot as a float stop I recently discovered. the knot proved to cast effertlessly without hang ups on the spool as well as holding tight on the line while making multiple adjustments through the afternoon. a perfect solution for the slip knot fishermen. 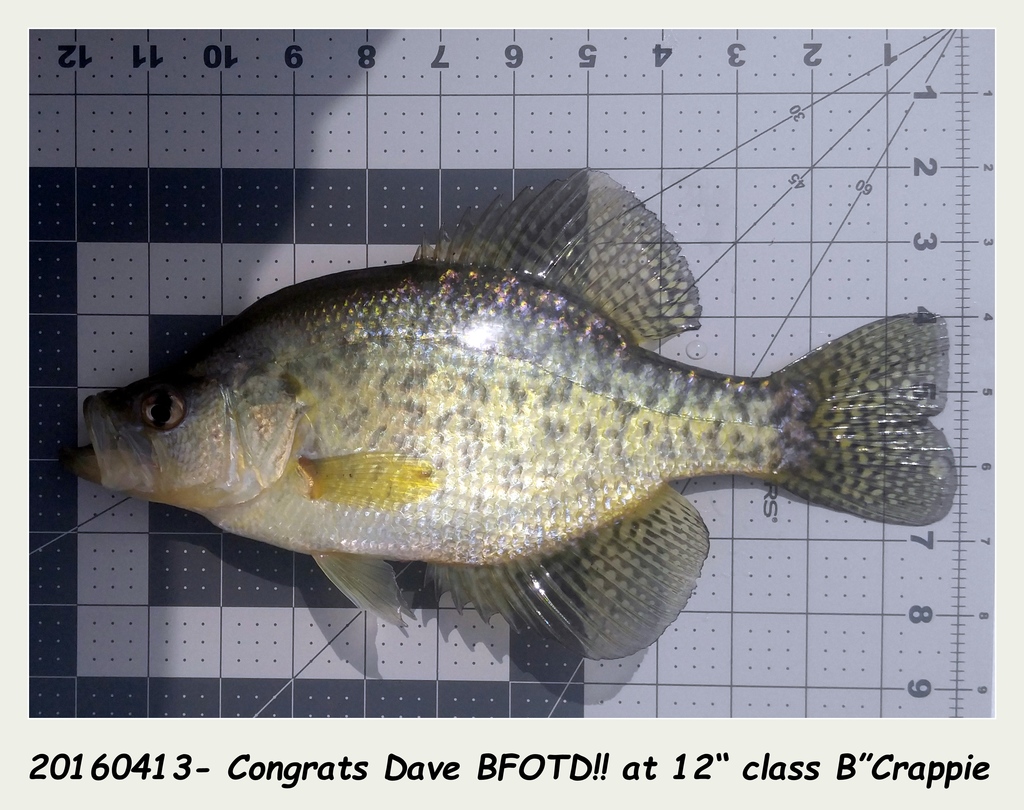 Collage of the outing: 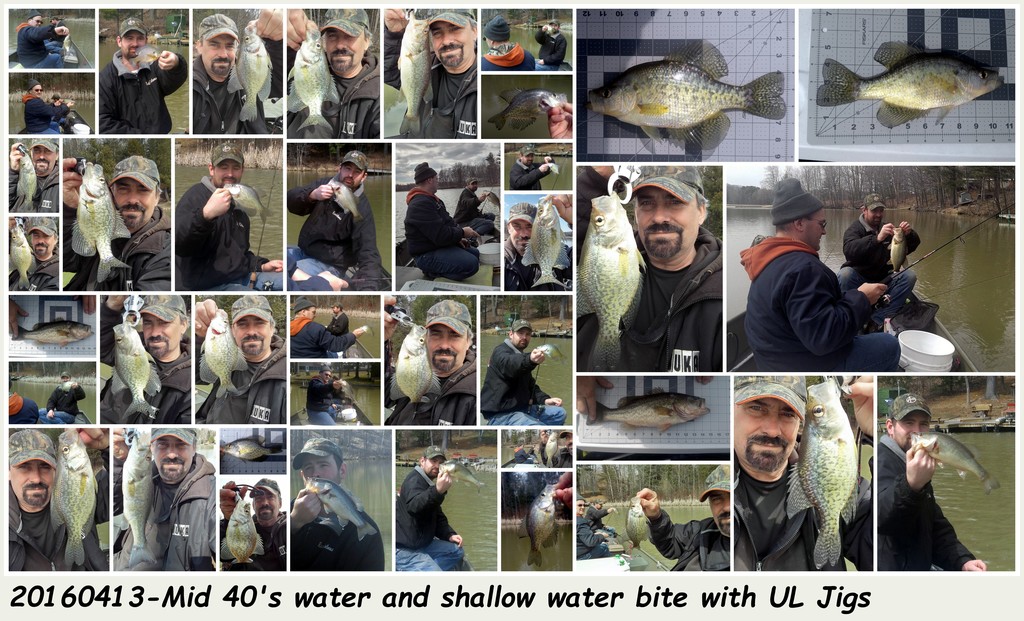 … good luck... warm weather is just turning the corner for us... polar vortex just left a couple days ago... you could feel spring just about here.

… sounds like a great fishery! it seems where-ever we locate the schools of panfish the preds are mixed right in

...its funny were having a tough time with Locating SMB and B'Gill

Skim ice on the lake last week and today with the start of a huge upswing in great weather coming up… we decided to test our successful cold water pattern on one of the busiest lakes in my area. Some of my largest B’Gills came out of this lake. The Crappie population is way down but some of the remainders are reportedly large in size and occasionally a couple of them reach the local papers each year. The locals fish this lake hard for food harvest and B’Gill and Crappie take the biggest hit. I used to fish this lake during the summer peak and It was a constant battle with the boaters and jet skiers.

The lake has two long shallow cuts that extend to the north side of the lake… with the warmer southernly winds we knew that this was going to be a significant “warm spot” that early panfish and preds would gather.

We launched the boat at a great DNR maintained launch that gets filled up during the summer…we were the only ones there to take advantage of the early season bite. Love it!!

The surface temp registered a blistering 45 degs… sonar showed many fish suspended in the deep water off the shallow break. Past experience typically told me these fish were zombies and will ignore the bait. That doesn’t stop us from trying though. As predicted these fish ignored everything offered to them even vertical jigging with live waxies.

We explored a southern bay with one visible LMB in the shallows… no other hits. We sensed this was going to be a tough day from the start.

Exploring a long northern cut with direct south wind we experienced a a slight increase in temps at the wide opening and up to a 5-6 deg warm up at the very end. There were the fish!!!

The B’Gills were in huge concentrations at the very end in very shallow water of a foot or less! Casting the tiny slip floats sent the school panicked in every direction with no bites… twitching or moving the float also sent them fleeing!...  proving to be an impossible fishing situation… too many fish to fish!? Visually sampling the population as we made our way thru we noticed some significant fish over 8” worth coming back too. We decided to let the school settle and come back later afternoon.

Exploring another northern bay area we tagged many small LMB 12-14” casting the tiny jigs at every stickup or weed edge…that kept us busy but not satisfied.

On our way to the last deep north cut we decided to stop and test the shallow bite at one of my favorite shorelines and I tagged a significant 86% Master Angler Rated B.Crappie casting a 1/64 oz jig with a 2” Power Minnow. Measured in at 12” class.  Long casts with 4# Nano was key. Earl then tagged a 24” N’Pike…Continuing to the most extreme end we found fish in the way of 12 to 14” LMB kept us busy for a few then we decided to head back to the B’Gill Cut. 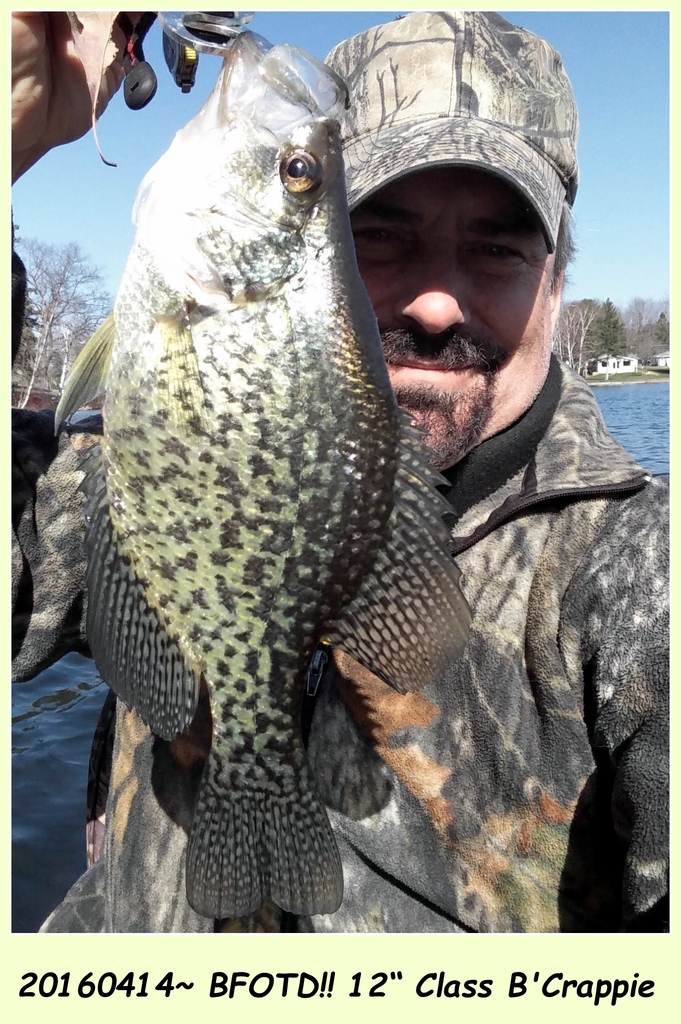 Once deep in the cut I rigged my Chain N Crank with a pink Waxie and cast long casts deep into the cut past most of the fish. This rig suspends almost weightless and twitches like a jerk bait… let it rest and keep a tight line… this is where the 2# Nano comes in handy for detecting the strike. I quickly tagged a couple dozen gills small up to 6.5”. Earl got skunked in this area with slip floats and tiny jigs. 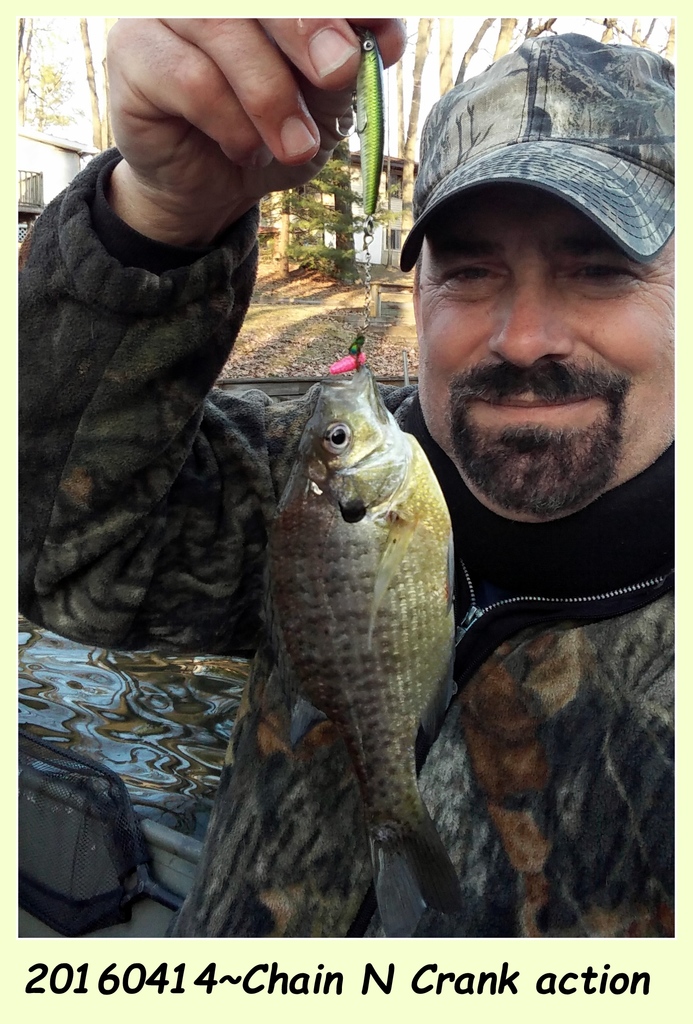 We decided to leave and head back to South Bay spot #1 today to fish the remainder of the afternoon. Earl then tagged a 90% Master Angler Rated P’Seed at 8.1” on a 1.5 “ swim jig that kept us in the game for a few more casts until we finally called it. 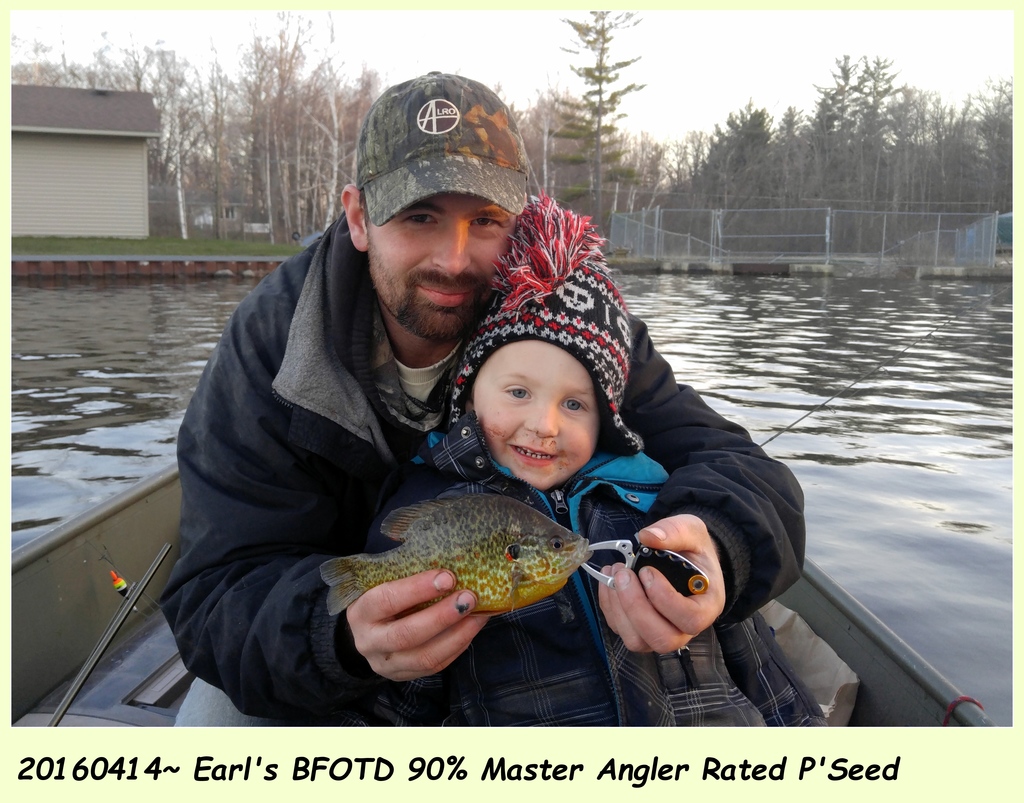 Took a walk to the bridge and discovered a few fisherman fishing most of the corners… after a short discussion nobody was getting anything on live bait… worms and minnows. Checked the water temp  low to mid 50’s. I brought a slip bobber rig and an UL spinning rod rigged with the trusty 2” power minnow. After a couple casts under the bridge I hooked up with a solid bite and an unusual battle… thought it might be a channel cat at first. Ended up a large turtle just grabbin and holding on to the jig head. Really had a hard time getting the jig back from its grip. 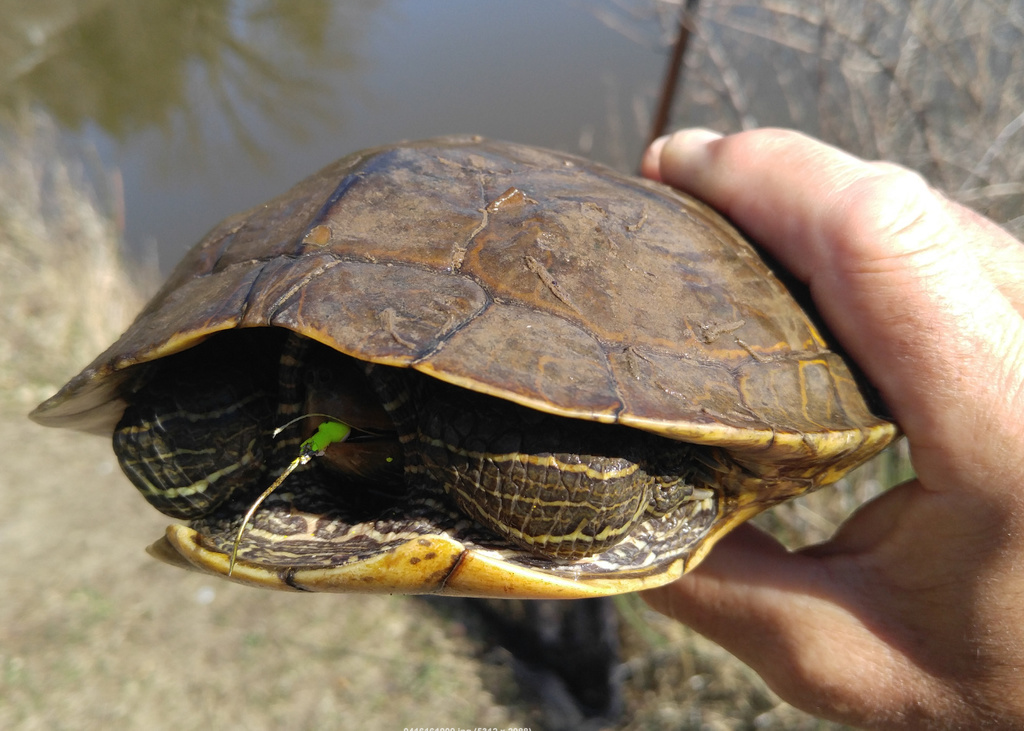 Came back in the later afternoon and had the 4 corners to myself. I had an hour to kill before the start of the Tiger’s game. Casting the Power Minnow I hooked up with a whitey… always impressed with the rod jarring strikes and ensuing battle. Alternated casting a silver curly tailed grub and the Power Minnow… ended up with three. I will hit the bridge in the early to mid morning looking for a continuation of this bite. I really like getting into the schools of the white bass. 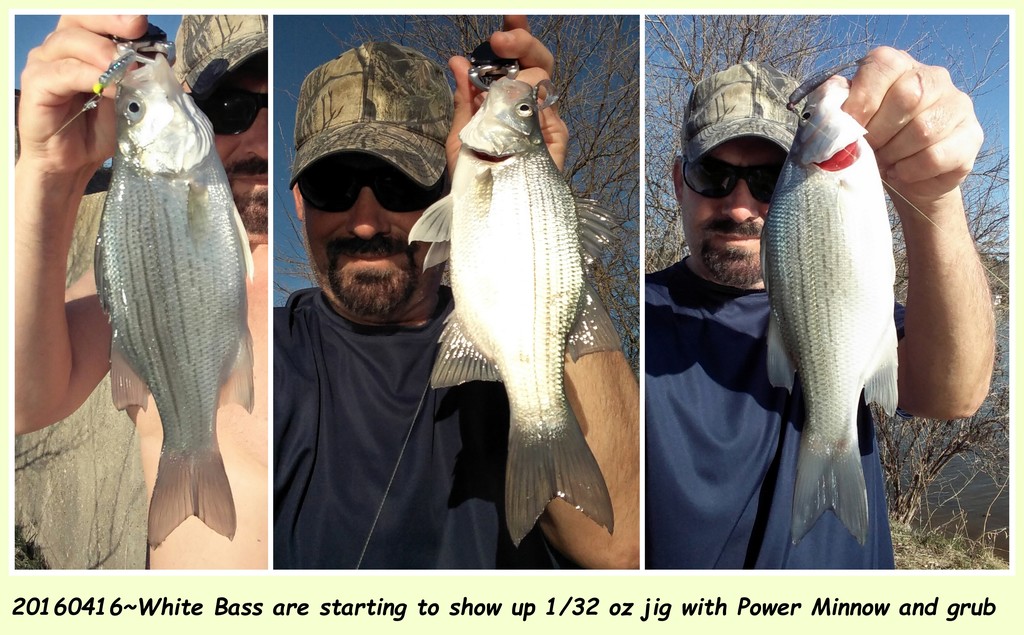 White curly-tailed grubs on a jig were my best lure back in OK.  In-line spinners were second.  Anything with a lot of flash would get hit.

They school up and roam around.  You'll be on fish for 10 - 20 minutes, then the bites dies as the school moves off.  Either relocate the school, or wait for another one to come through.