In Fisherman article " A Case for Selective Bluegill Harvest"

I strongly urge bluegill anglers nationwide to read Cory Schmidt's revealing and informative article 'A CASE FOR SELECTIVE BLUEGILL HARVEST" in the May issue of In Fisherman and realize that the future of trophy bluegills and quality bluegill fisheries is at least partly our own responsibility. The future of bluegill fishing is in our hands, and to ignore that fact will only lead to the continued decline of once great bluegill waters throughout the land. If you love bluegills, and especially big ones, read and apply this theology to your fishing so our grand children can enjoy these great fish to the fullest. 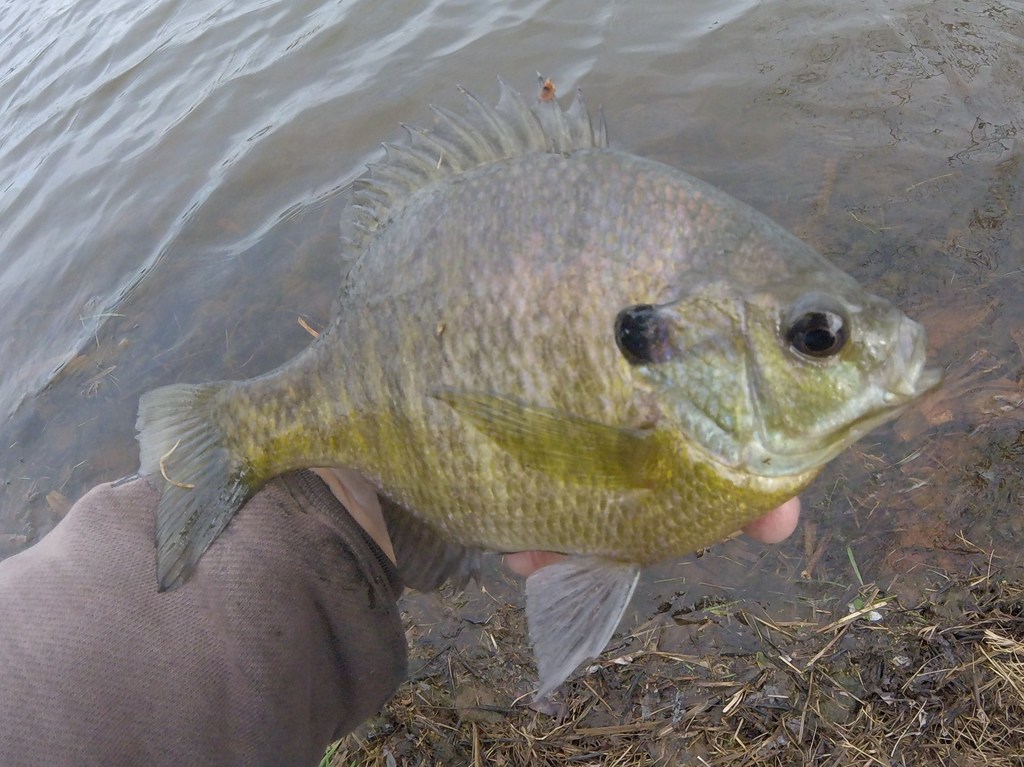 Find out why I release fish like this one. Thank you Cory Schmidt!

Agreed. I posted on this article when I read it also. Very informative and to the point.

what a great article and SPOT ON!!

Doug Stange makes an initial statement in Inside Angles…

"Important right up front, is recognition that one of the most fundamental aspects of fishing is understanding the basic nature of the fish species being pursued."

Knowing the target species the B’Gill we as fisherman should know these basic facts:

(my take on the article)

As we all know existing laws are slow to change or implement and study within some States. To turn things around here are a few suggestions we as sportsman protecting the future assets of our sport for us and our descendants should implement as personal rules and guidelines. (couple of my own suggestions also)

I have read and subscribed in one way or another to In-Fisherman magazine… even back in the early 80’s they have lead and taught conservation in the sport. KUDOS Cory Scmidt and the In-Fisherman staff for continuing on this popular and affirmative agenda.

in fisherman has discussed this for years and nothing has changed.gotten worse now that you can spot last years beds on a sidescan and camp out on em when the fish move up.growing season up north just doesn't allow for this kind of harvest.they grow too slow and will stunt.8inch gills are considered nice fish anymore near me.at least people stop fishing for them as they are not really worth cleaning.

The state of Indiana considers a six inch bluegill to be of keeper size, and they manage with this in mind. Wish they would think a little more along the lines of producing bigger bluegills.

Good read..........most states won't invest or protect a particular fishery unless it's a "cash cow" like the largemouth...........other examples are the Striped Bass in the Mid Atlantic and the Red Drum in South Carolina.......lot's of revenue generated means nature and politics will cross........the bluegill has never received that status............the four states I maintain an annual license have high limits or none at all.....

Here in Arkansas our limit is 50 bluegill over 4 inches , we don't have the problems that folks have up north , we have a longer growing season and most of waters are controlled by Mother Nature , our oxbow lakes are restocked at least 4 times a year, they are not fish farms , they are the wild free range " True Trophy's." We are bless  here with everything  from Trophy Brown and Rainbow Trout, Walleye  to the Humble Bluegill, fishing here is fun , I have been doing this all my life and have been Blessed to experience this , Thanks to the Big Man up there !   LOFR 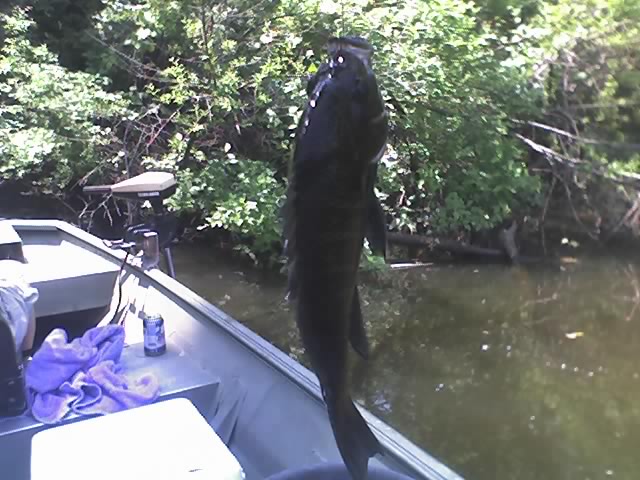 some lakes in illinois have a slot limit for crappie,others have a limit of 15 -25.bluegill have NO SIZE OR HARVEST LIMITS.some site specific limits are posted.some redears are stocked here and there but bluegills are on their own.thats why whenever i do find a spot with 8 inchers and over i return every fish and keep their location between me and my maker.i am still stunned when i catch a 10- 11 inch gill in my area in public water.they protect crappies,perch,catfish bass but not bluegills.

Very similar situation here too, Jim. I know it may seem selfish to keep good bluegill waters to myself, close kin and anglers I trust. But with the internet and continued realization of these declining fisheries, I just feel the gills need a break, especially in public waters, which is where I catch 75% of my 10 inch fish.

My very largest fish, however, are caught usually in private venues. Of the 174 ten-inch gills I caught in 2015 probably 130 of them came from three small public lakes that could be pillaged if the word got into the wrong hands. Of those larger fish, only 8 of them exceeded the 11-inch mark...and all of the 11-inch plus fish came from private waters. And this is 174 bluegills out of a total of 4,933 gill I caught during the year...showing just how rare a legitimate 10-inch fish can be .

Thankfully Maryland has enacted a 15-fish limit on gills since the early 2000's. Still, some anglers more than double dip and ignore the laws. I completely understand the need for keeping things quiet.

Declining bluegill size in public waters is not just a problem in northern waters.  I have seen it happen many times on waters I fish here in Tennessee, have seen multiple public lakes with top-shelf fishing for large bluegill get hammered with fishing pressure and never recover.  Maybe someday enough anglers will tire of allowing those who overharvest to ruin it for everyone and demand change.  Until then, it will only get worse.

Agreed. Like Walt, I have seen bluegill fisheries spiral down to the point where the rare 8-inch fish is now considered 'large' in lakes where 10-inch fish were once relatively common. Especially in several southern PA lakes where the limit continues to be 50 fish a day per angler and most anglers choose to only harvest the very largest fish in the system.

Crappie fisheries tend to spike and fall in a 4 to 7 year cycle in many Back East lakes, recovering with larger average sized fish when conditions and spawning success dictate improvement. However, I have never seen a top-line bluegill fishery recover likewise once angler glut and overharvest takes it's toll. Once average size drops significantly it stays there, or else continues to decline with fish smaller yet.

If you are fortunate enough to have a quality public or private bluegill fishery in your area treat it well and with respect. We don't all have the same blessings as others in different areas throughout the nation.

HERE IN TN.  THERE IS NO LIMIT; OR SIZE LIMIT ON BLUEGILL;; BUT; THERE IS FOR SHELL CRACKERS  / RED EARS;; GENERALLY;; IF YOU FIND SOME BLUE GILLS IN THE 8 INCH RANGE;; YOU FOUND A HONEY HOLE !!   MOST PEOPLE HERE ; FISH FOR THE MONEY FISH;; THE BASS !!  FOLLOWED BY;; CATFISH;; CRAPPIE; STRIPE;; AND JUST ABOUT IN THAT ORDER !!  VERY FEW PEOPLE; TARGET BLUEGILL;; ON OCCASSION;; A GRAND PARENT WILL TAKE THE YOUNGER KIDS OUT FOR A DAY OF FUN..  MOST ANGLERS HERE; CONSIDER A BLUE GILL; ALMOST A PEST; GOOD FOR NOTHING; BUT BAIT FOR BIG STRIPE !  VERY MUCH LOOKED DOWN ON !!   THE TOURNAMENT BASS ANGLERS HERE; ABOUT EVERY WEEK END;;  JUST ABOUT RUN THE WATER !  WONDER WHAT WOULD HAPPEN;; IF WE HAD BLUE GILL TOURNAMENTS;; TO GET ATTENTION ??  NOT TO DECIMATE THE MIGHTY BLUE GILL-- BUT TO BRING AWARENESS;; THERE IS ANOTHER GREAT LITTLE FIGHTING FISH WELL WORTH  THE EFFORT !!

Here in Ohio there is no size or creel limits on bluegill. In most public waters an 8" bluegill is a monster. If I want bigger I have to head for a private pond, and the owners of those ponds DO set limits! Take more than allowed - don't come back! I know of several people who are no longer allowed to fish some of those ponds.

What I don't understand (and agree with) is being allowed to take all you want, and any size you want to use for bait. A lot of people head to the local lake when they plan a trip for catfish, fill a cooler (I've even seen a big tank in a pickup truck bed) with big bluegill, then let most of them die and throw them away. I think there should be some kind of "wanton waste" regulations for both fish and wildlife. Take all you want (up to the legal limit), but use all you take!

"Yea Jeff Big Bass Sustenance and Big Catfish too I imagine."
9 hours ago

"I caught this one on a Tooty tie over ten years ago now….time flies!"
10 hours ago

"Nice John…..they are quite aggressive particularly in cold water……I see large…"
10 hours ago

"It’s crazy down there with so much water around you , it’s like sitting in the middle…"
10 hours ago

"Here's a GS that took a snap Bean while searching for Blue Gills. Again, from a small back…"
23 hours ago

"This one is my favorite."
yesterday