20170717- I’m considering adding another local lake to my hit list. On two separate trips the past couple days I’ve done some reconnaissance and contour mapping. 10 year history and Back ground check reveals a thin history of trophy B.Gills with one breaking the eleven inch mark… certainly raised my eyebrow a bit.

The initial perimeter scan of the lake revealed many spawning sites with very little weed cover. A firm hard sand bottom. Further sonar scans revealed two separate main lake basins one approaching the maximum depth of 29-0’ and the other at 23-0’.

The association keeps the lake scoured clean of any weed growth except for shallow pads and reeds. There is a DNR access site with a gravel lot and cement launch. Local Fishermen pound this lake hard. the lake is 100% developed along the whole perimeter.

Initial sonar findings during this calm hot stretch in July discovered a developing thermocline at 17-0’~18-0’. Schools of fish were located in large numbers in flats in the 12-0' to 16-0’ range just above the thermocline. The fish were revealed to be many B.Gills in the 4-6” range. They readily grabbed a tungsten ice jig tipped with a Pink Waxie. In two trips I have tagged over 150 fish in that range… frustrating.

Finally, in a last ditch effort for the day, I tried a 13-0 to 15-0’ stretch while waiting my turn to pull my boat out at the launch. I spotted schools of the 4-6” B.Gills… while drifting through an area I finally tagged a lunker at 9.4” on the Vertical-Jig/Ice-Jig/Pink-Waxie set-up.

With the new sonar data, I have developed a 90% complete contour map of the lake and will finish on my next trip.

The lake is going to be a challenge… …school of 4 to 6" b.gills shown clearly in down scan imaging …while vertically jigging these are the scans im looking for... b.gills moving in the water column 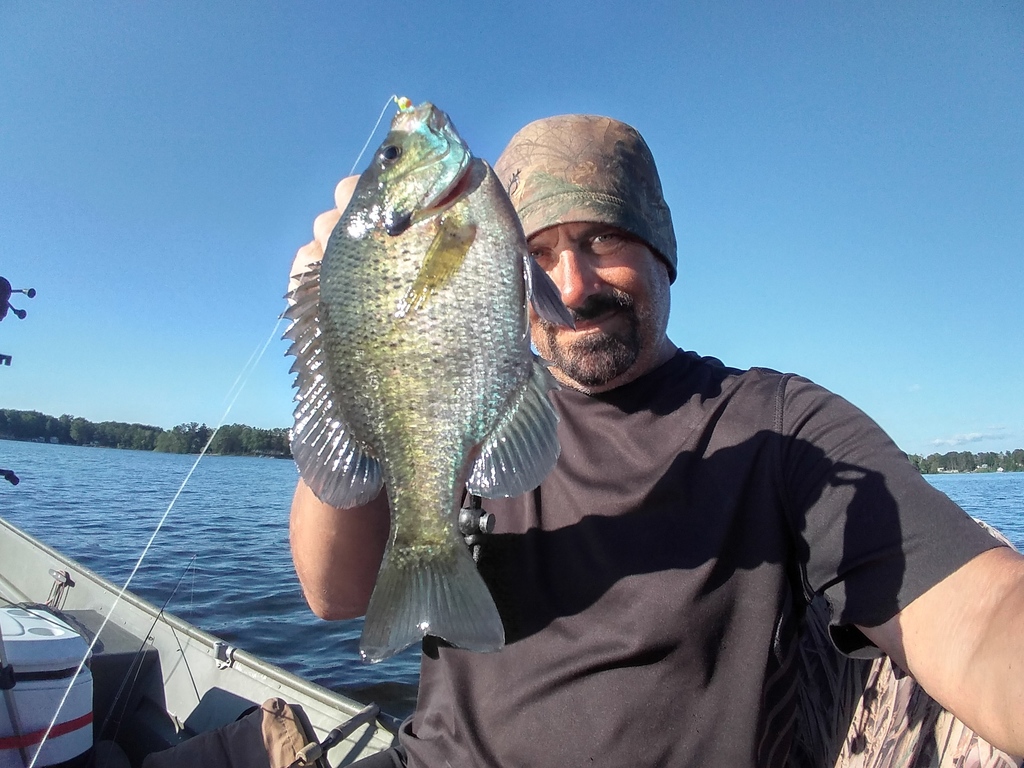 20170801~ after an amazing day on the water tagging a trophy B.Gill I decide to hit that spot again… this time my wife Jeri wants to tag along but wants to LMB fish with heavier equipment… Fishermen can be the most stubborn people!. A 10” plus B.Gill is small potatoes to her and a 16” LMB is ‘What she’s talking about”. LOL

So we set out onto the lake and launch at the DNR site and head out to the spot just yards in and we make one of the Minor Solunar upswings for the day.

I spot schools of fish in the vicinity  and start vertically jigging them … my wife laughs at me for the small 5-7” fish I’m tagging. I pull out the Long-Casting/.016 oz Jig/Pink Waxie set-up and start fan casting the area. I set the hook into a brick wall that starts taking off like a freight train. I joke with my wife thinking it’s a LMB by the fight “she should start fishing small”. As the fight progresses to the boat the fish takes out some drag and does the B.Gill circle down deep. I then knew it was a Lepomis… my heart pounds as I brought it to the net… it was substantial in body mass.. 11” easy I thought.

The fish stretches the scale to 10”… fooling me by its sheer weight and mass. I release the fish quickly after quickly photographing her… my wife is not impressed. She continues to LMB fish! Eventually she succumbs to the Long-Casting rigs but does not tag a fish

what an amazing month of July!... cant wait to see what August brings to finish out the Summer Period! 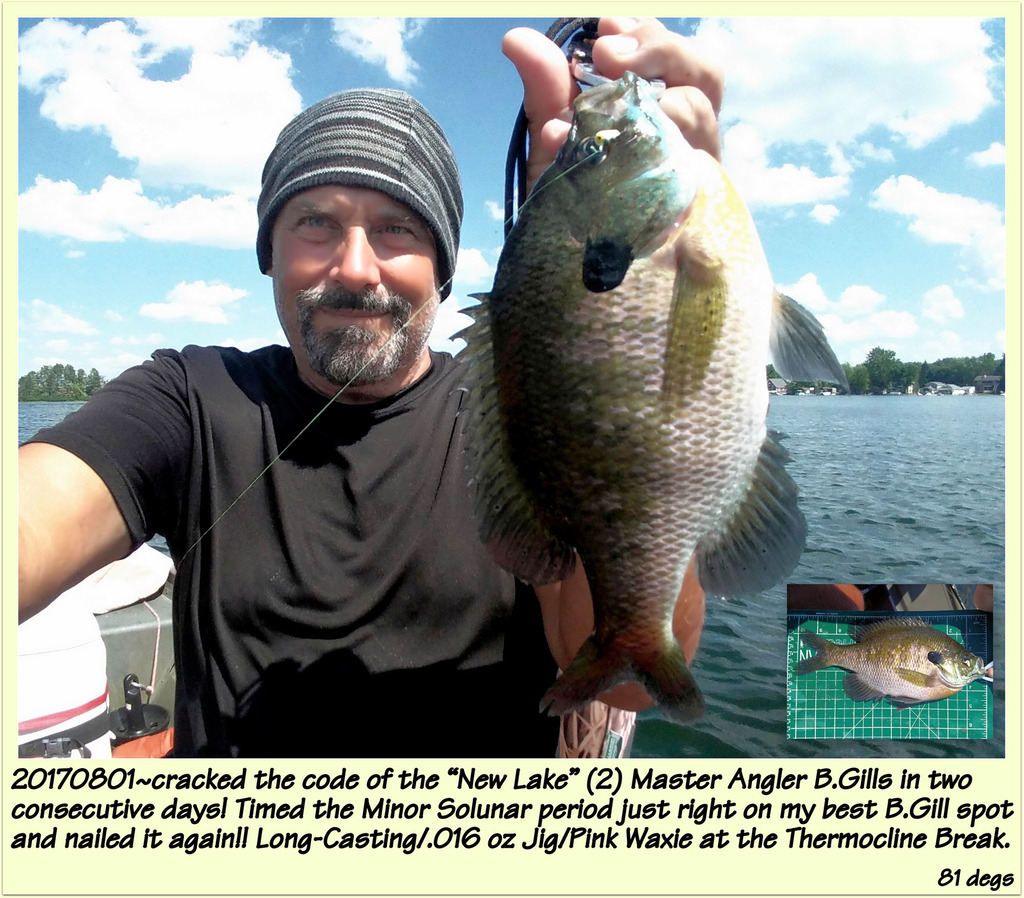 2010731~had an incredible time exploring and fishing the new lake on my list.

Spent a lot of time fishing deep schools of fish in 16-18 FOW… many of these fish were B.Gills in the 5-7” range… about 40 fish worth. But it was worth fishing these schools because I came up with (5) 90% + Certificate fish… one Master Angler over 10” at the 10.25” mark. Very thick shouldered fish with a lot of fight.

I was pretty satisfied with today’s outing because several factors came into play that eventually allowed me to find and land these fish. First of all my very detailed contour map showing deep weed beds and bottom composition layers allowing me to see these areas of transition. Then fishing the thermocline break that essentially concentrates fish in these areas. Intersecting thermocline break with slow gradient contour transitions concentrated them even further. 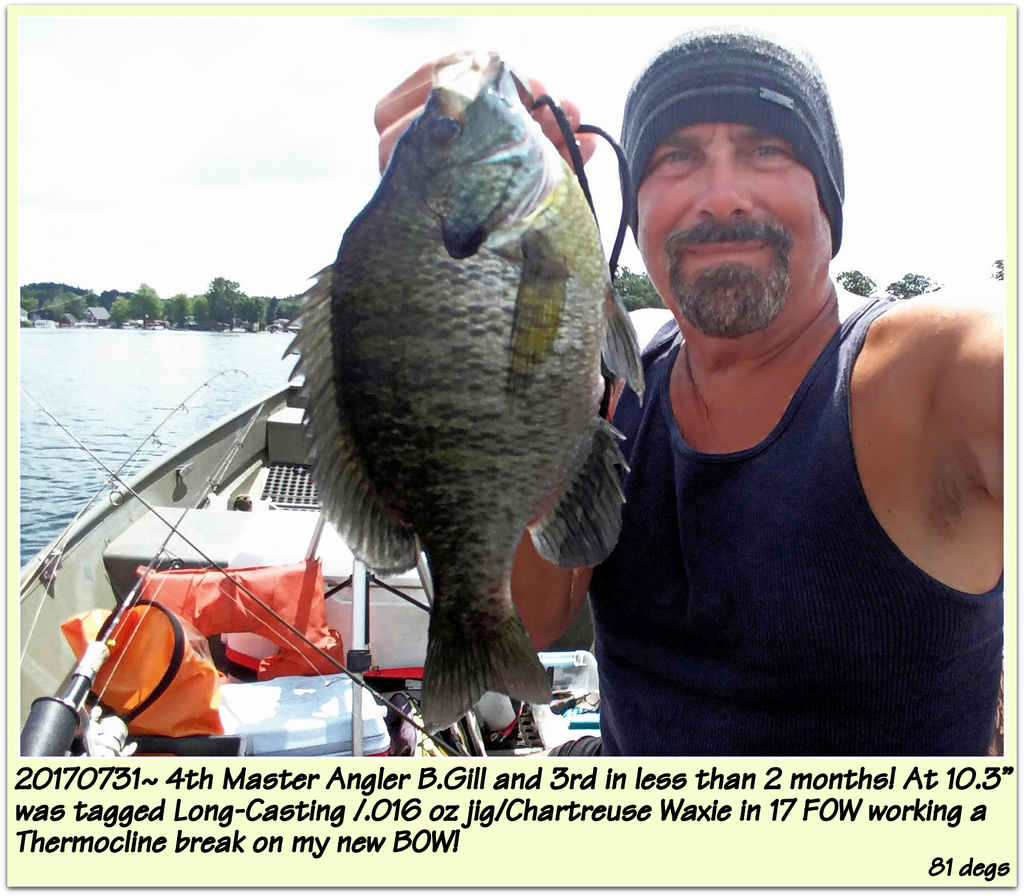 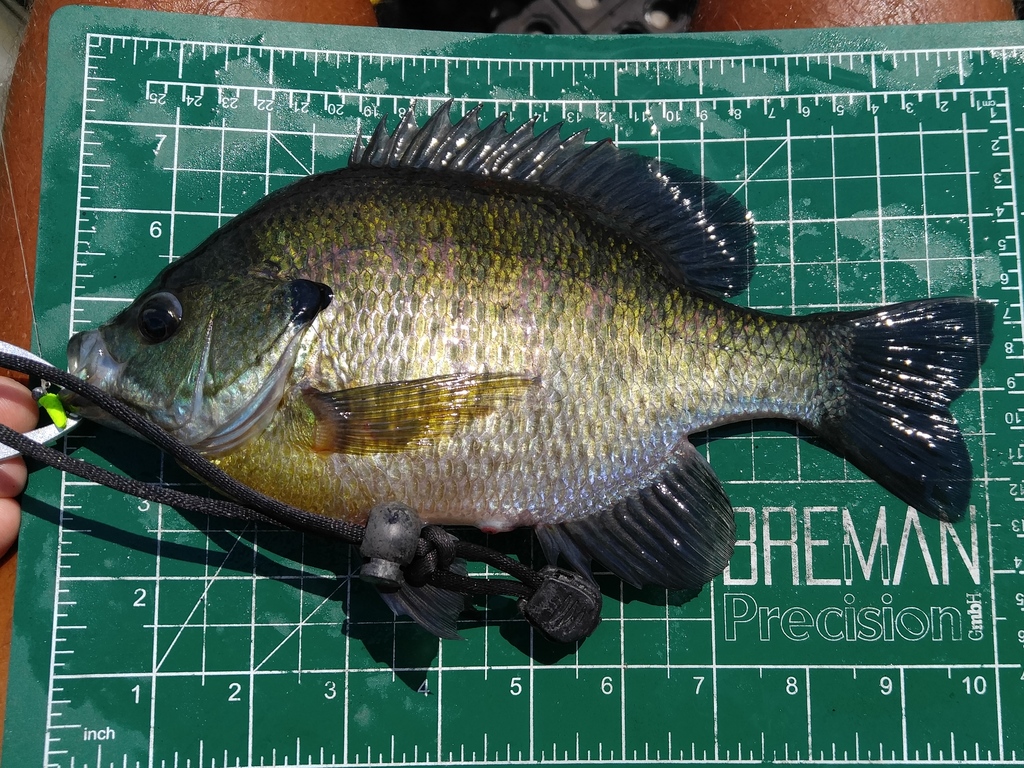 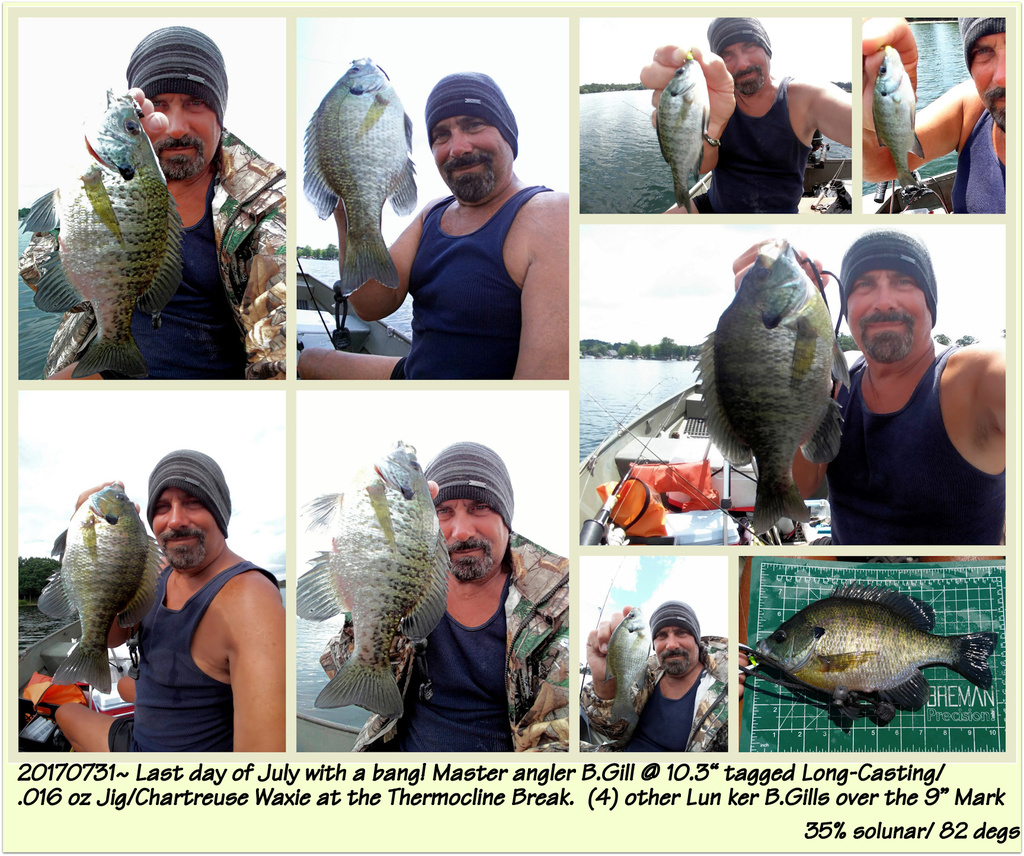