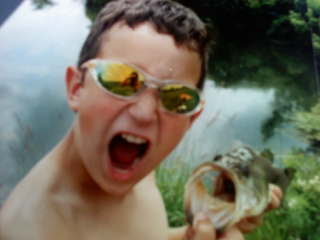 hey everyone.i went icefishing 4 the first time today and i used the edvice some guys gave me.i didn't get any fish, and i moved all over the ice but didn't get a nible.im hoping that if i go again i…Continue

my dad and i want to start icefishing. we just purchosed the basics to get started. hand auger,bucket seats,two ice rods,small jigs,and a few things. we will mostly be fishing on medium sized ponds 4…Continue

brett rockey has not received any gifts yet

What type of animal is a bluegill?
yes but its to to little to fish in

"Nice fish. I've done a lot of smallmouth bass fishing this year with a fly rod. It's a…"
4 hours ago

"Living it up Jeffrey ! Nice!"
Friday

With some of the weekend’s blue crabs, we picked the meat and my wife made her delicious homemade…
Thursday
3 Comments

"Lol Carl…….wood is a great choice on the Albemarle……I tell people…"
Thursday

"terrific question Jeffery;; and down right mean to;; LOL  only getting to cast one time…"
Thursday

"Please do Bruce…..Being raised in Louisiana I was introduced to smoke sausage in various…"
Wednesday