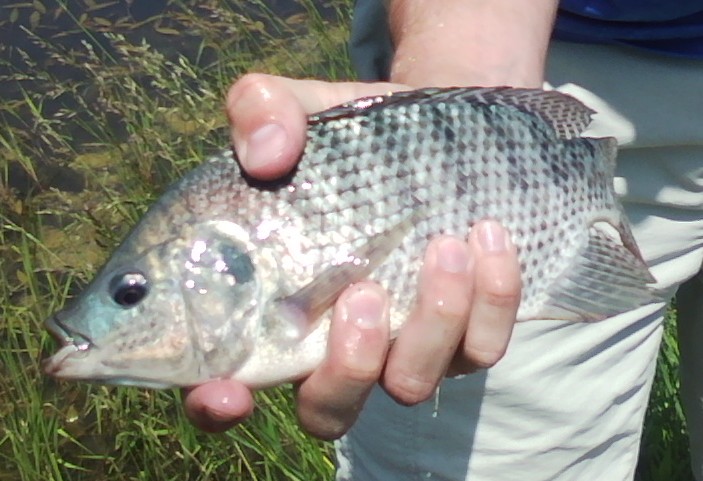 That's smart, Tony - you've done an admirable job keeping reproduction to a minimum in that pond, and that would go by the wayside in about a month from the time tilapia were stocked.

In the interest of fairness, tilapia do a decent job of controlling FA when stocked at significant poundages per acre - I know that SEPond does big business stocking them now in golf course ponds for that purpose.  I just want pond owners who are trying to raise trophy bluegill to be aware that tilapia will wreck that management plan.

I still get sick thinking about what that pond I stocked them in would have been this year.  The 10"+ coppernose I posted photos of last year were two years old, and had been six inches and about three ounces each when I stocked them in March of 2011, so they grew thirteen to fifteen ounces (some of the fish we caught last April were at least eighteen ounces) in one year.  A month ago I stocked 50 6-8" largemouth and ten one- to two-pound blue cats to thin out the overpopulated small bluegill, but it will take at least a year to get back to where the pond was a year ago, and even then the fish may not achieve the same growth rate they had before.  It was a tough lesson to learn the hard way.

That's why I won't stock them in the HBG pond, Walt. it just seems counterproductive to me if the goal is trophy BG.

Tilapia set back my best bluegill pond two years.  A year ago I stocked them in the one-acre pond that produced all of the big coppernose I posted photos of last year; I stocked them in the hopes they would control the watermeal that had plagued that pond since I began working with it.  I was hesitant to stock the tilapia because every time I had ever seen them stocked in a pond the bluegill had overpopulated as a result, but there was a large population of stunted black crappie in addition to many young Florida bass, and I thought if ever there were a pond that tilapia wouldn't cause bluegill overpopulation it would be that one.

So the tilapia ate my pellets and spawned like crazy, and one day in August when I arrived at the pond to refill the feeder I was greeted by dozens of pound-plus dead coppernose.  None of the tilapia died, of course, because they can tolerate lower oxygen levels; and the little coppernose, which were by now overpopulated, didn't die - just the big ones.

Tilapia are great for trophy bass ponds.  But the sales pitch that some tilapia sellers use of claiming that tilapia will make every fish in the pond bigger, is just that - a sales pitch.

Theo, I would appreciate a future update on your impressions of the Tilapia and their ability to control FA. I'm afraid to stock them in the HBG pond, but just tonight I was noticing how the algae has blown up in our other ponds, and was mulling over the possibility of substituting some Blues, instead of Cutrine Plus as a trial experiment.

I stocked Blue Tilapia in my two ponds for the first time today, hoping to eliminate the large Filamentous Algae unsightliness they have become prone to, as well as providing some nifty forage for the predators.  I got 75 of these big fellows (6" up to 9" or so).  Looking forward to catching them and the bass/bream which will benefit fro them as the year goes on.

Everything caught on live cricket tipped jigs ….surface temperatures down to 77 in this creek,…
6 hours ago
0 Comments