This would be a good place to list the childhood hero who took time to take you fishing. Especially if it was for bullheads or bluegill.

My hero is Frank Condello. He always made time to take me fishing. Here's a link to a story I wrote about a bullhead fishing trip he took me on. 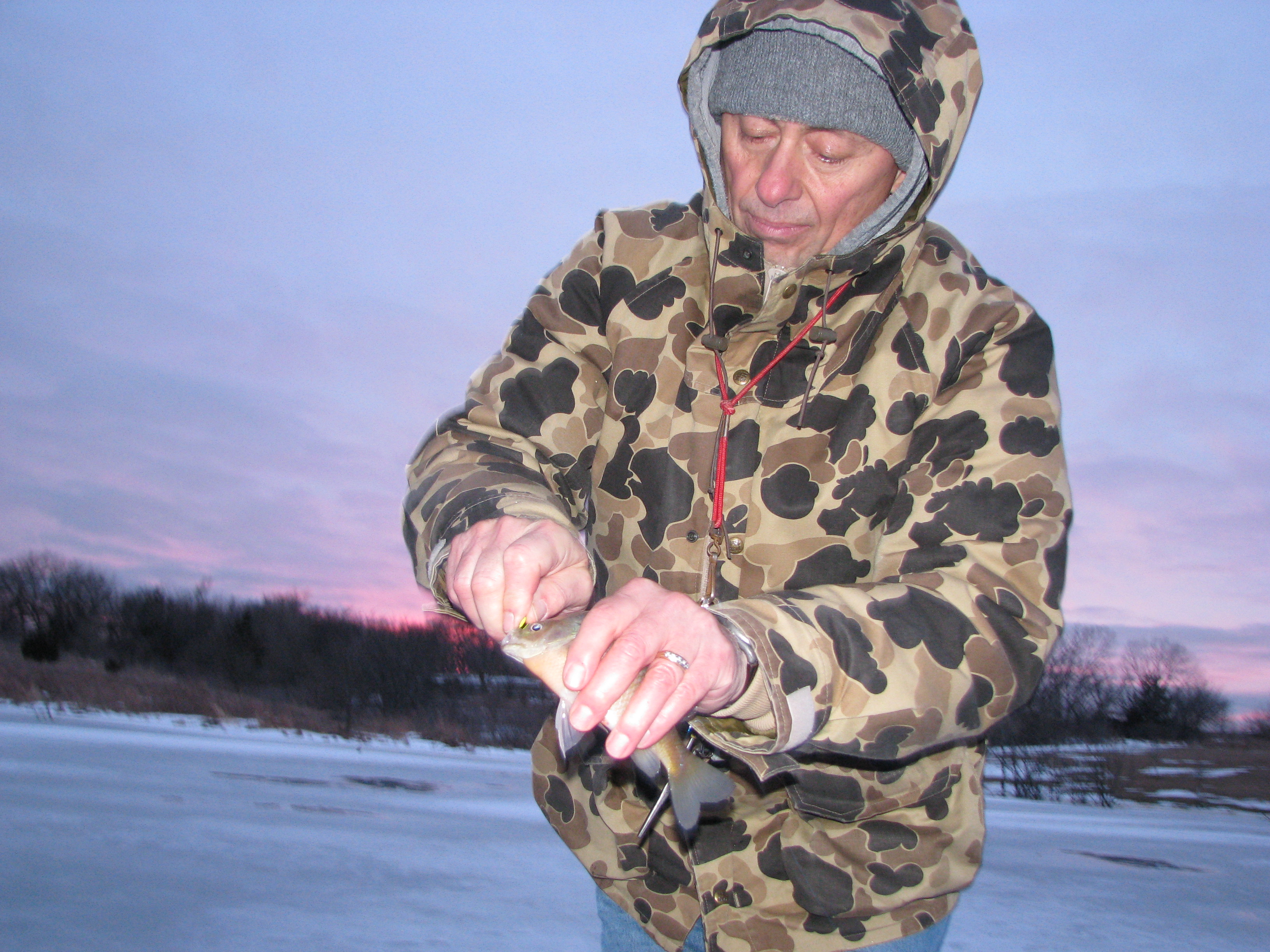 My childhood hero was my mom. She volunteered nearly all of her free time to helping others and devoting her life to her family and her faith. I can only attempt to emulate how great she was and what she meant to people who came in contact with her. She passed away in September 2000 and not a day goes by that I don't think about her and how blessed I was to be raised by such a wonderful person.

We didn't fish a lot as kids, unfortunately, but when we did, Mom outfished us every time. We'd all get skunked and she'd end up with a heavy stringer. And she always just shrugged her shoulders when we asked her how to she did it. Bullheads for us too, were also the focal point of the majority of our fishing successes.

My Dad says that my first fish was a "puffer" fish on the Jersey shore.

I don't remember it, so I'll tell a brief tale of the first fish that I remember.

Let me preface the story by saying that this is my first real memory. I've never shared it with anybody. I'll tell it the way I remember it. There could even be some inconsistencies, but does it really matter? I may have little moments of memory from earlier in my life, but they're just flickers...fragments, with no order or certainty. This next story is real to me. In some ways more real than things that happened just days ago.

I’m in Orleans, Nebraska. Orleans is still a town with some vibrancy. It originally was a rail town. Money and goods came through town on a regular basis. Surrounded by farms, Orleans still has enough agricultural income to limp along for decades.

Yes, Orleans is a pretty cool place to visit.

My Grandpa and Grandma live in Orleans. I remember that they were always old. They did lots of things, but they were grandparents, so to me they were definitely old. Late 40’s, maybe 50. Might as well be 100 to me because I’m only four. Grandpa is a farmer, and Grandma is a farm wife. Grandpa is a mythical figure, with a long, lean look. When he has his cowboy hat on, he looks like he’s straight out of a western movie. Maybe he’s the guy by John Wayne’s side deciding when to attack or defend. He’s definitely all white hat. Grandma makes incredible homemade noodles. She’s also humble. So humble, that when she tells everybody it’s time to eat, she says that she hopes the food is good enough. We all know that it is.

It’s Friday night. The day before was warm and sultry for late March. It was probably 70 degrees and the wind blew and blew. Dad tells me that we’re going fishing in the morning. I’m so excited, that the memory is seared into my little 4 year old psyche. It’s time to go to sleep.

My Mom tucks me into bed. Bed at my Grandma’s is actually a crib. The crib has a nylon hexagonal pattern mesh that surrounds it on four sides. In reality I’m not sure that it’s a crib. I know that it folds up and can be put away until one of the grandkids comes to visit. Then the two sides are popped up with a quick “snap”, and it becomes a cage. I’m big enough to get out, but I don’t want to, because when I’m in the cage, I’m at my Grandma’s—and when I’m at my Grandma’s I’m happy. The house is big and roomy overall. When I’m much older I’ll realize that the house is practically microscopic. How did it seem so big?

Now I’m eating oatmeal. My Grandma makes it. My Grandpa is not there to join us because he’s already out doing the chores. My Dad has convinced my Mom that we will indeed be fishing. After all, he collected red worms the night before. My Mom is concerned about me getting too cold. The coat she puts on me has a fuzzy fake fur rim around it. I’m wearing black dress shoes, but I don’t know why.

Uncle Ernie has told us that the pond has bass and bluegill. The word “bass” conjures up some kind of image. An image like something that’s beyond attainability. It’s an image of something cartoonish, and jumping and mean. It’s on the front of the magazine at the Four-Star drug store. I can’t afford the magazine and Mom won’t buy it for me. I’ll later discover that my Mom and Dad didn’t have much money. By not buying the magazine they saved enough money to put me through dental school. I’ll never pay a penny for my education. I pay them back by doing their dental work for free. I pay them back by visiting them. I pay them back by giving my Dad his own pond and stocking it with whatever he wants. I pay them back by keeping their granddaughters safe and happy. I will pay them back by helping my daughters with their education. My girls will pay me back in their own way….Actually I guess they already have.

My Dad and I get in the car. It’s a 1966 Ford Fairlane. It’s dark blue and it cost them 2,000 bucks. It’s got a slant six. When you open the hood, and your Dad shows you how to adjust the timing, you mostly see asphalt. Someday I’ll own the car. It will be my first. I won’t appreciate it like I should. Dad and I make the long, long drive to the pond. I’ll later discover that the ride is about 800 yards, but I’m excited, so it seems to take a long time.

When we pull up to the pond, the wind is blowing so hard that there are whitecaps on the one acre of water. I remember that the water was brown. A four year old can barely stand up against the wind, so my Dad trudges out to the water’s edge, holding my hand. I don’t remember learning how to cast, but with my Dad’s help we heave the Zebco 404, and it’s heavy weight and wormy cargo about 60 feet. In my Dad’s hand materializes a red metal device that’s jammed into the ground. It’s a pole holder.

It’s too cold and miserable to stand outside so we return to the Fairlane. Why did my Dad take me out? The wind chill is maybe zero, tops. Does my Dad take me out because HE wants to fish? Or is it because he knows that I want to fish? Maybe it’s because he knows that someday I’ll buy him a pond and discuss bluegills and sit on a little plywood dock that I built for him with the help of a friend of mine who’s an attorney, but he needs money and works for me at 15 bucks an hour. It’s SO incredibly cold, but I remember being excited.

My Dad and I sit for an eternity in the car. I can’t remember if it was running or not, but we weren’t that cold in the car. We wait, and we wait. My hope is strong. I’m sure that a fish will bite. The rod stays in the rod holder for over an hour with the big bow of line bending back to the bank.

I can see the disappointment in my Dad’s face. He proclaims the contest over, and walks out to collect the pole. I’m still in the car watching him. As he starts reeling in the offering, he pauses, then calls out to me. I jump out of the car and run to him as he hands me the pole.

There’s a fish on the end of the line.

My Dad gives me gentle instructions, and after a brief battle I land a 12 inch bullhead. The hook is swallowed, and now out of somewhere my Dad produces a red elongated device that takes the hook out of its stomach. The fish is placed on a stringer and my Dad explains to me that maybe the bullhead had been hooked for quite some while.

Amazingly, this knowledge is used to produce a recognizable method. The line is kept tighter, and the tug of the bullheads becomes noticeable.

We catch dozens of bullheads, each of which becomes part of an ever more impressive stringer.

My Dad was a hero that day. He was only 25 years old, but he was a hero. He could have sat in that warm house and watched television. Or did Grandpa and Grandma even have a television yet? I don’t know—but the fact remains…Dad was a hero.