The Pond Gives Up A Little More....

Hit the pond again today. I don't have many public access fishing options around here, this being one of the few. This is what it looks like from the dam: 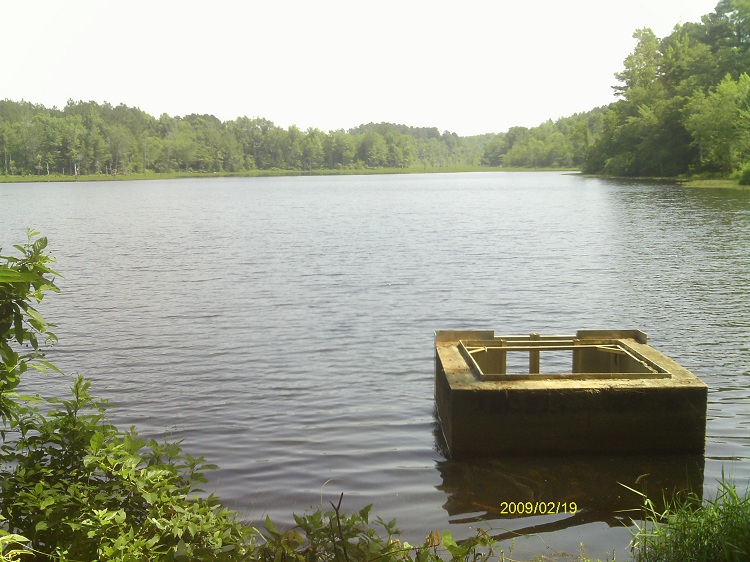 As nice as it looks, the fish weren't there. This is supposed to be the deeper section and I had hoped to chum up some decent fish along the margin shelf. at this end. I got there before sun up and went to it, but about all I managed to stir up were a few piddler brim and a couple of snakes.

They showed up in the edge of the weeds seen above. As it happens, I was sitiing right there with my feet half in the water at the same time!. The first snake appeared out of nowhere from the left and swam by less than a foot from my toes - right where the white stuff is in the pic. As I was watching it, a second, bigger snake came out of the weeds from the same spot and scooted over and past the first one. I'm just glad I had on my rubber bog boots.

once the sun got up, I went further down the lake along the left shore to a small boat dock and got in a little practice time with my jig spinners. They are copies of Charlie Brewer "Bee's," ... 1/32 Roadrunner clones, more or less.

I make 'em up in my shop. Well, as usual the small piddle poppers like them just fine, but I couldn't drum up anything bigger. So lastly, I tied on a 1/80 marabo8u jig head and added a whole red worm trailer. As I fished it right along the boat dock, a dark shape rushed out from beneath it and took that jig straight away. After a sassy little tussle, this is what emerged from the water: 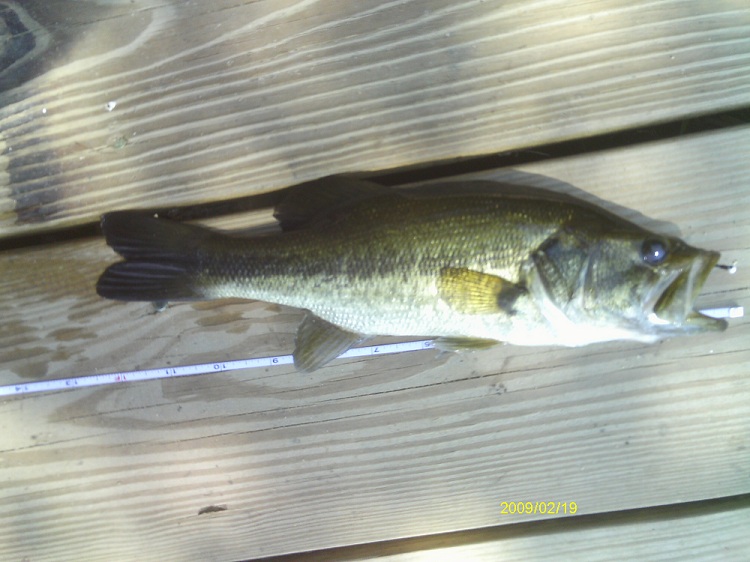 12" Largemouth Bass - look at that dinky little jig. Pure luck is all that kept it on the hook for landing.

Obviously, the pond holds some fish. A second year bass like this is eatin something, and I've caught shiners, brim and a decent bullhead out of this body of water. I just gotta keep working at it until I unlock the ponds' secrets.

Thanks for looking. Tight lines!

Permalink Reply by jacob wilson on June 4, 2011 at 7:58pm
dude this looks like a killer fishin spot!! if u had a small pirouge, hobie, or a flat boat with a trollin motor u probly kill some big fish in there. looks like theres a bunch of weeds and grass thats where big bass hang out try flippin or punchin the grass mats with a punch rig. maybe try tiny crankbaits for big bluegill. i think once u find the secret ull be catchin all kinds of fish!!

That's what I'm thinking, Jacob. I like your enthusiasm...

I have to keep at it and work out some different plans, that's all. Let me think out loud here for a minute, okay?

I see some folks from time to time in jon boats poking around the edges of the pond, but I've yet to see anyone do any real catching. This is one of those small bodies of public water - 30 acres - that receives moderate fishing pressure. As such, the usual methods and tactics need to be modified.

For example, I watched two guys in a jon boat yesterday anchor in the weeds not 50 yards from me. They were watching me pretty close, too - one of them wondered later about what I was feeding (chumming) with. But for all their watching, all they caught were empty Bud Light bottles. It was pretty obvious from watching me that such a plan wasn't hittin' on much. But they persisted in doing the same old thing, anyway....

Ive also watched other people boating around the lake, tossing Beetle Spins hither and yon... and catching little, if anything. I find bobbers in the trees and the occasional soft plastic worm snagged in the shore fringe, too. It's obvious that people are fishing there - and mostly doing the usual things, seemingly to little effect. From the online reviews I've read, most anglers consider it only fair.

The main challenge is that the lake is covered with weeds, both above and below the surface. The shore is very nearly obliterated with a 10-20 foot wide fringe of weeds. This puts the vast majority of the lake out of reach from the bank. Beyond this "weed skirt", there are the banks of grassy weeds with the entire upper end a carpet of this weedy growth.

Down below is duckweed, where the sun reaches the 2-3 feet depth range. This stuff is a nuisance but it is also a favored cover plant for panfish and certain of the forage foods they favor. What you're looking at is an old southern mill pond, so it is kinda "choked up" that way.

No one really manages this pond, not as we think of it, and I'd rather that they just left it alone anyway. It does have a creek inflow and outflow, so there is also a current of sorts and turnover. Personally, I think that the better fish are in two places:

1. Nearer to the center of the lake.

It isnt terribly deep, maybe 10-12 ft on average. It features an old stream-bed channel down the middle. Here the water is at it's deepest. The bottom rises from there to the mid-shelf level and finally to the shore fringe. Im betting there are larger fish along the channel, where it rises to the mid shelf.

2. Right in the upper-end weed beds, close to the deeper live current channels.

This is pretty much a given, as far as I understand things. But I've yet to see anyone fishing these passages on purpose. Like most anglers, people use the channel passages through the weeds to maneuver into spots where they can fish towards the shore. Meanwhile they are likely boating right over the heads of some pretty decent fish.

There are no hydrographic or contour maps of the pond that I can find, so I have to make my best guesses. The lack of such information may be in my best interests, too, since no one else has it either!

Regardless, without any sort of boat, I must work with limitations. But there are fish there, as evidenced by the keepers I've caught and the abundance of smaller ones I see. Additionally, it is a fertile water, typical of most Southern warm-water impoundments. Lots of minnows, small invertebrates and planktonic life are in evidence. I would not expect monsters to lurk there, since it really isn't all that big. But keepers oughta be there.

I'm fairly certain that most people have not worked hard enough to really find the fish in this pond. Lastly, it is one of the few lake/pond venues available to me. I simply am not blessed with a pond of my own, a lakeside home, etc.  So if I want to catch fish it has to be in places like this. These are things in my favor, really, if I keep at it.

Thanks for reading and tight lines!

Permalink Reply by jacob wilson on June 5, 2011 at 5:25pm
yeah i gotcha. i mean if u dont try how are u gonna catch anything. just like Mike Iaconelli "NEVER GIVE UP!!!!" lol due u could build a flat bottom boat for $250-$350. just go on youtube and look up KYafield with Tim Farmer. just keep tryin throw ur whole tackle box at em if u have to lol. brush hogs are a good bait for bass and bitsy pond minnow is awesome for bluegill and u cant forget bout crickets the #1 bait for gills. alrite dude ill ttyl. hey good luck with ur pond fishin as soon as me and my friends get trucks were gonna start goin pond hoppin!!

"Pond Hoppin" - that's what my son does. He and his friends know a lot of people with ponds. Unfortunately, I don't.

My dad and I built a jon boat when I was a kid, from plywood and fibreglass. I learned one thing from that experience - for the money, I'll buy one.

Thanks Jacob, and good wishes on your truck.

Permalink Reply by jacob wilson on June 6, 2011 at 6:15pm
well why dont u go with ur son? i sure he would like his dad to teach him and his friends how to fish lol well if u build a boat u have to make the whole thing from wood they floatt pretty good for one or two people. sometimes u can find interstate ponds that were once gravel pits or just to build something and they put water there. try google maps u can find a whole bunch of spots but u probly need a truck. thanks i cant wait till i get a truck or my friends do then im gonna be fishin 4 or 5 times a week

Man, my fingers are crossed for you. I hope you get that truck.

There are actually a lot of ponds around here - Google Maps reveals many. Some are the gravel pits you mention, others farm and creek ponds. Invariably, they are all private and off limits. People are funny about their property, and they don't welcome intruders. I've asked many folks to fish, and get the NO answer. So I tend to stick to my own resources.

As for my son, we are not even on the same schedule. I'm up at 5 and gone - he's still asleep. By the time he's stirring I've come home, cleaned up and am ready to chill. Besides, the ponds belong to HIS friends and THEIR families. Folks here don't take too kindly when you come toting along someone else, even if it's a dad. You can kill your fishing privileges in a quick minute that way.

Like I said, they can be kinda funny.  But, my young friend, I thank you for caring.

Permalink Reply by jacob wilson on June 6, 2011 at 8:20pm
yeah i know wat u mean i use to fish in this pond about 400 yards from my house it was nice until someone moved into the house next to it and told me not to come over on his property anymore kinda stupid cause i dont have anyone to bring me fishin besides my mawmaw and she conplains about bringin me 5 miles to a rec park im thinkin bout buyin a three wheel bike so i can pull a flat boat and have all of my stuff in it and stay somewhere for a day or two. hey do you have a facebook?

You know, my other favorite thing is cycling, as in bicycles. You can get trailers or the swiveling hitches for pulling trailers, which can be used on two wheeled bikes. One of those hitches, and a wheeled dolly for a fishing kayak and you could be set up pretty good. As you note, you could put most - if not all - of your stuff in the kayak.

Then you wouldn't need a special bike, nor have your friends see you riding around on a three-wheeler. Any off road bike or even a cyclocross bike would do just fine. Something to consider.