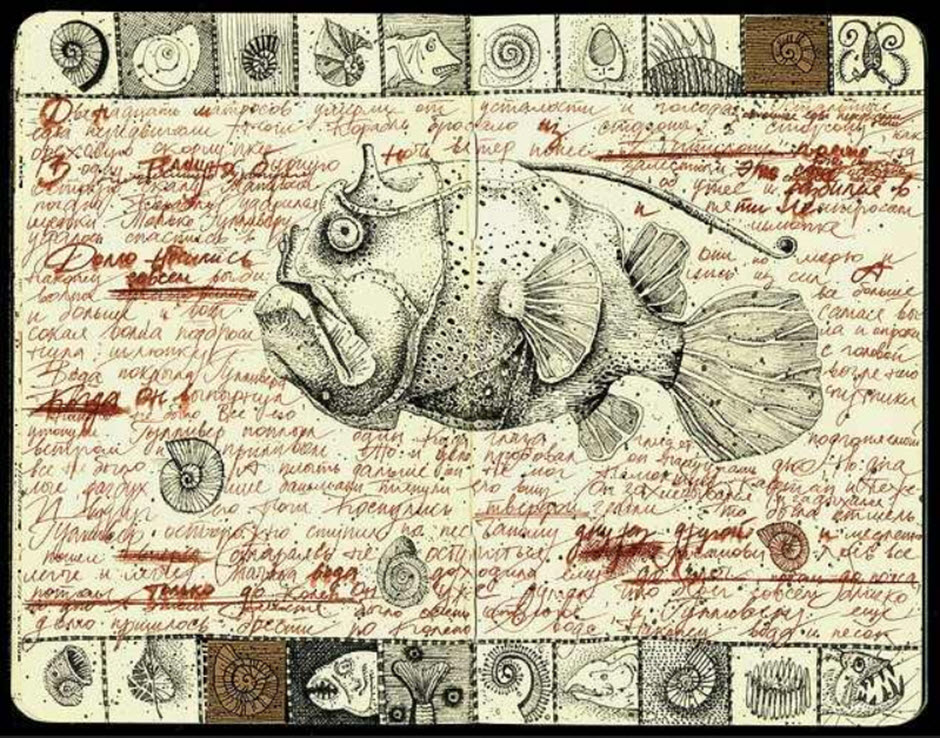 ... whenever i go fishing i usually have a plan processed beforehand. Todays plan entails heading back to the weed bed where I picked up most of the bites. My first position was situated at the corner of a large weedbed easily found on satellite imagery. Vegetation usually means soft bottom, weeds at all levels of growth and decay and more food available for pannies. So today I will riddle that weed bed and bay with holes and hopefully end up with more quality numbers and sizes.

managed to detect schools off small shiners in the deeper areas of the upper reservoir Wixom Lake. it took a while to detect and identify the schools of fish... they would come up to the bait or offering sniff it and return to the bottom. i was finally able to set the hook into one and identify the school. Here i was thinking neutral Y.Perch while fishing and end up this.

i packed up for the day 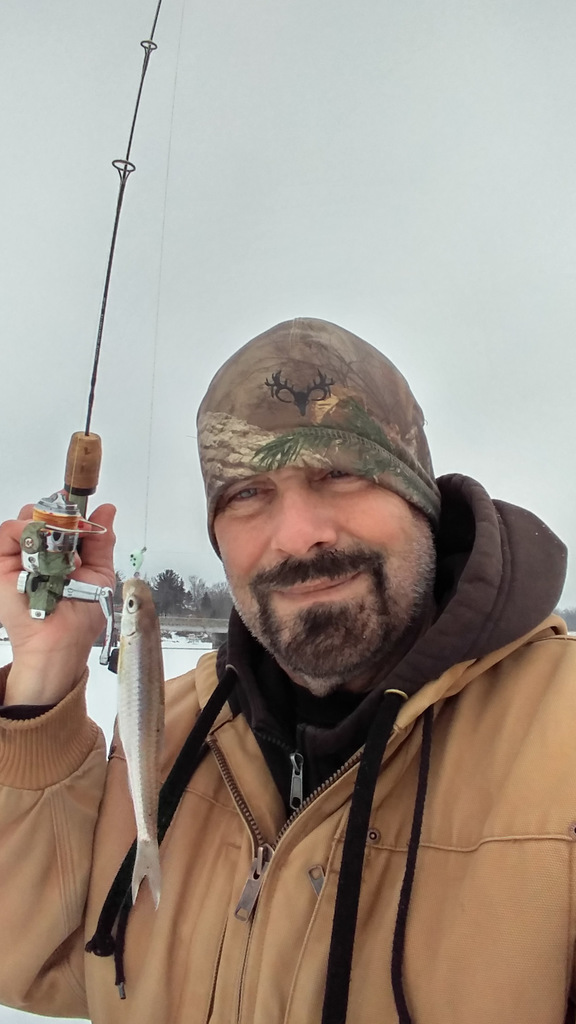 Very cool. I plan to try and keep a blog updated throughout this year from trip to trip.

thanks Jason!... i think its a great idea... its really improved my game and it gets me off the couch... lol.

The weather looked grim for any extended length of time fishing… so the plan was to hit the good spots straight away. Earl started the day with an active N.Pike caught on the micro jig and live waxie. It took me awhile to find any decent panfish. We caught many tiny Y.Perch in the deep basins so moving shallower I quickly hooked up with (2) Y.Perch Jumbos  while ticking the short weed beds standing in (8) ft of water. 2 jumbos within 15 mins. A stray B’Gill was caught in short order.

Our outing ended when we had to call it on gusting winds blowing the shanty around.

What time we had on the ice today was premium and noted. 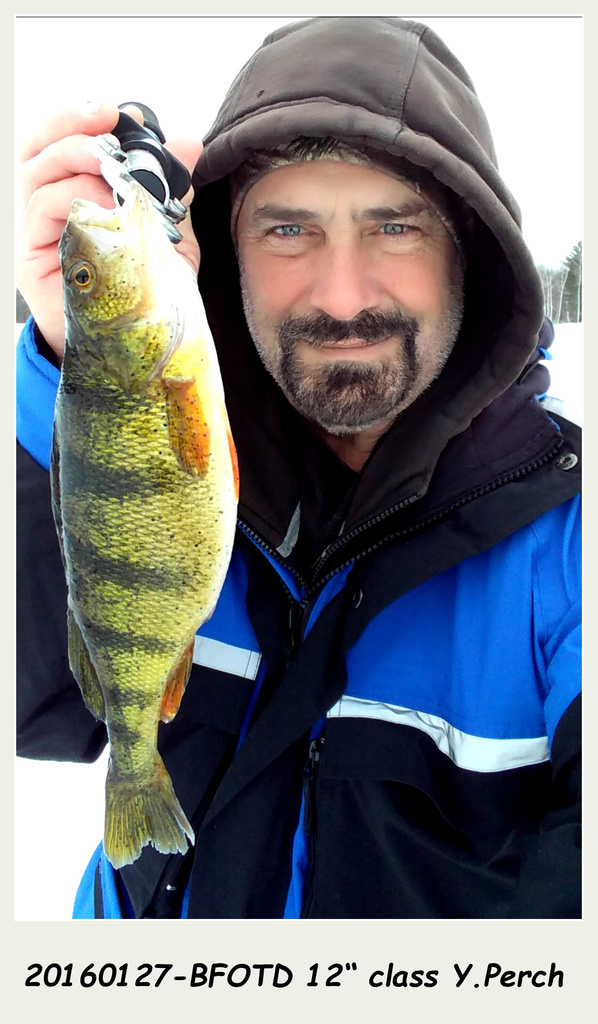 setup i used for the Y.Perch ...one of my favorite rigs for Y.Perch 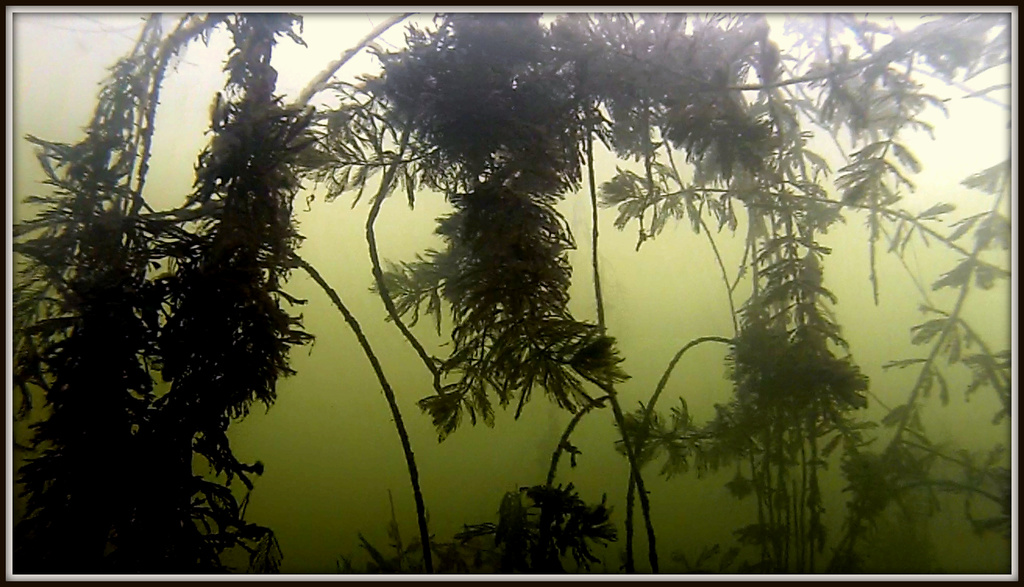 20160130. Recently with the introduction of the new ice auger to my arsenal of ice gear it seems I have made significant leaps and bounds in my ice-fishing efficiency.

More water covered statistically should yield more catches and I should be content with that. Drill dozens of holes and spot check them with the depth sounder… send a jig and bait down and see if I could entice fish that are sticking to the bottom out of sonar view. Sure all this process takes time but is it also the most efficient? My eyes widened when I discovered this video on the AquaVu Micro II.

Solution? Spend a few minutes and drill dozens of holes and then quickly 360 scan with a camera. Efficiency would increase muli-fold. To buy the camera at 220.00 is a significant outlay of hobby capital. So I quickly considered some of the equipment at my immediate disposal. My GOPRO Hero 3 Silver Ed has never seen a drop of water. So what would it take to turn this piece of equipment into an immediate positive tool for ice fishing scanning the holes 360 degs. I found this video…

Requires a go pro bracket I did not have on hand. To get this experiment going on the ice today I borrowed a 5’ selfie stick attached the GOPRO camera to the end and headed for the ice down the street.

The GOPRO connects to an Android app via WIFI and monitors the camera for a short distance. The view is displayed nicely on my Android phone. The GOPRO also has a setting flipping the video 180 degs if your phone was recording while upside down…. Nice.

Once out on the ice I cut a few holes… the first being shallow in a known weed bed. The others continued out deeper. I made the WIFI connection between camera and phone then slowly dropped the camera thru the hole.

Failure less than two foot down… I lost the WIFI connection and the screen went blank. The camera was set to record so I continued rotating the stick slowly a full 360 degs then pulled the camera up and watched the video.

The camera produced a decent video with very good underwater quality. The weeds were clearly outlined. The scan did not show any visible fish … no crappies or B’Gills suspended or swimming off the bottom.

All things considered it is still worth while doing a quick 360 scan before fishing a new hole then viewing the video… still a time saver. Very disappointed I wasn’t able to connect the wifi while camera was under the ice.

20160130. Had a great time catch a few Smallish Y.Perch on the orange and chartreuse Mustache Worm 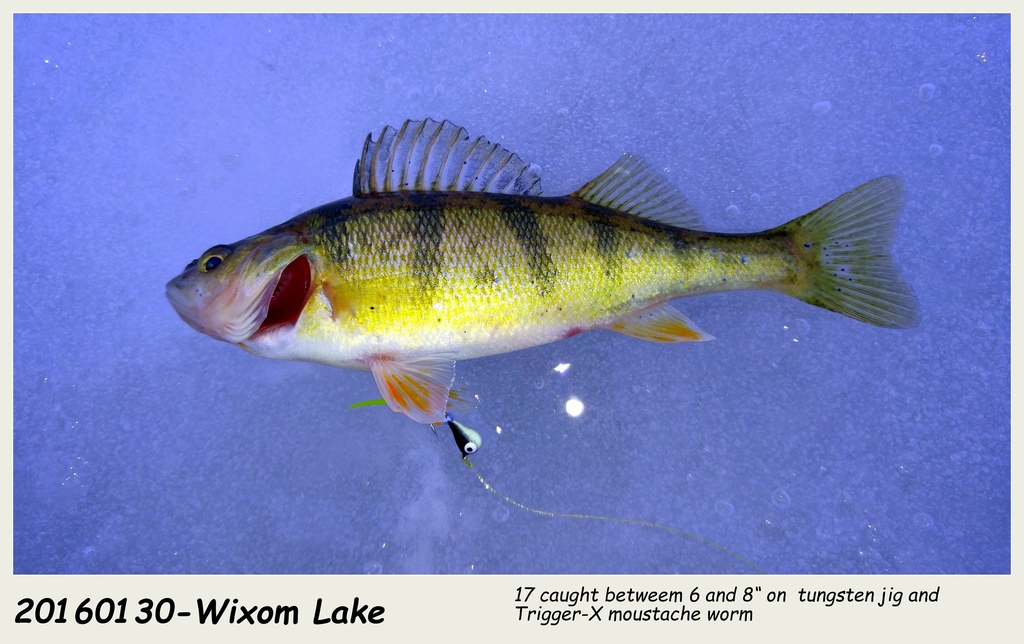 Greg Easley commented on Bruce Condello's group The Shellcrackers
"Caught this little guy out of my pond a couple days ago."
5 hours ago

"I fished close to the ramp so I could escape quickly."
yesterday

Eric Pierce replied to Leo Nguyen's discussion A family's loss
"Man, THAT happening is a very hard to get over. May the Lord comfort you, and your family Carl. So…"
yesterday

"YUP  KEITH THEY STILL ARE AFTER ALL THESE YEARS BUDDY,,,,,,"
yesterday

Kelly Peterson replied to Leo Nguyen's discussion A family's loss
"So sorry for you, Carl and your Family. God Bless and continued Prayers."
Tuesday

"Thanks Tooty  sometimes this a real Honey hole and holds many species."
Tuesday

"NICE  ONE JOHN THAT POOL LOOOKS INVITING FOR SURE......"
Monday

"I wish you well, we just got back from a vacation in the smoky mountains and got chased home by a…"
Monday

"Thanks Kelly, I normally tip with grass shrimp or live crickets, but caught several on naked casts…"
Monday

"THANKS JEFFREY AND JOHN , THAT REALLY MEANS SOMETHING TO ME BUDDY'S......"
Monday

"Thanks Kelly, just got back from family vacation in the Smoky Mountains!"
Monday