One idea on how to cut down the odds.

I can’t think of anything better to eat than pan fried bluegills and crispy french fries with fresh cucumber and tomatoes. Even though I love trout fishing and some other fish, fishing for bluegills is tops. When one of my friends found this site, he sent me the link. He isn’t a member, but knew I would like it.

It is not just because of how good they taste, or how hard they pull, but because I seem to relate better with guys who pan fish than bass fishermen or walleye fishermen or even trout fishermen.

I have been fortunate to have grown up in Michigan where there are thousands of good lakes and rivers, but there are some reasons for my good luck. From what I have seen so far, I fish quite a bit different than most of you even though we use many of the same techniques.

I catch more big bluegills than most people I know not because I’m some great fisherman, but because I get to fish where big bluegills live. We all want to know where those places are, and this is how I did it.

Before I was 16, me and my best friend, fished mainly from shore. We hitchhiked, rode our bikes, got my mom to take us or any other way we could. We both use to read the big three, Outdoor Life, Field and Stream and Sports Afield and dreamed about fishing those places depicted in the magazines.

By the time we were able to drive, we decided to celebrate the rights of spring in a unique fashion. Each winter we would start discussing where we would fish the following spring. Each of us would make our recommendations until we decided on a particular spot.

After that we would try to learn everything we could about the spot and all the secondary spots in the area. In Michigan the best fishing is between the first of May and the middle of June for most species so we would only go during that time period. The first few years our trips were usually within 150 miles. Our only rule was each year we would pick some place neither of us had ever fished.

Usually we spent 4 days until we got older and could afford to drive further. We spent a lot of time following rumors, but if we found the fishing wasn’t good the first day we went to our back up and explored our secondary spots. As often as not the less publicized spots produced the best fishing and were locked into our diaries.

We fished for everything and by fishing the best time of the year we understood even at a young age that if the fish were around, we could probably catch a few. We learned a lot over the years and our skills improved along the way much more than if we would have just fished the same old places every year like most of our friends.

Today I have my favorites, but I try not to fish the same body of water twice in one year and even though I spend at least 50 full days on the water. By the end of fall, it seems I never fish all the places I planned to fish the winter before.

It sounds simple, but it really takes time to seek out the information and make a plan. With the Inter-net today, it is so much easier than when I was growing up, the tackle is better, and if we would have only had access to contour maps let alone hot spot maps I can’t even fathom how many more places I would have on my list.

There is a thread on this site talking about releasing the fish over 9 inches or so and that is good conservation, but in some of the places I fish, we don’t catch many that small.

In the picture below, we didn’t throw one fish back and kept just enough for a family bluegill fry. In the cooler, there are more fish over 1 1/4 lbs than under. 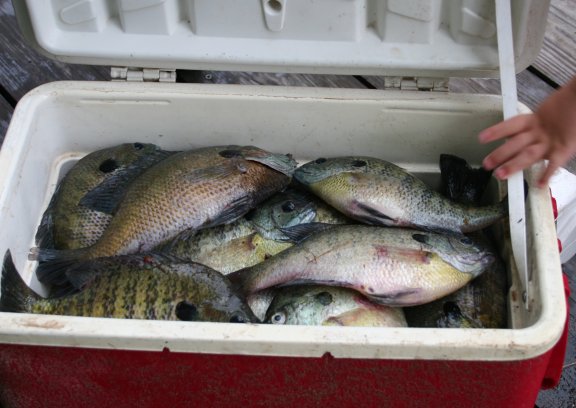 I have a good friend in Alabama who has the good fortune to live in the country and has his own private pond filled with copper nose and real bluegills. We decided to keep enough for dinner and this is a picture of what we caught in about 10 minutes. I met this friend on a fishing trip in southern Louisiana when we went down fishing for giant red fish and when he found out about my love of bluegills, he invited me down. Makes me envy some of you guys who fish farm ponds. 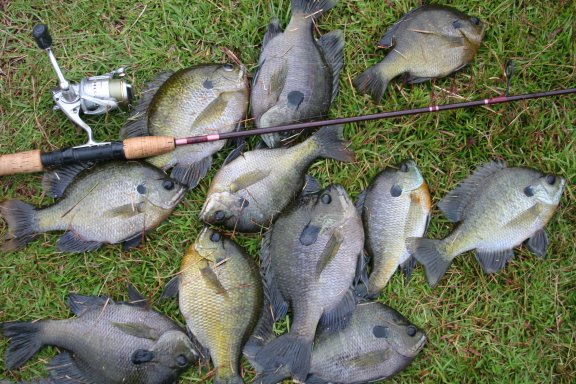 Permalink Reply by Bruce Condello on February 4, 2009 at 4:32pm
Great discussion post. I don't think that the 9-inch rule is a hard and fast thing that everybody needs to adhere to in every situation. Certainly if a pond or lake has the majority of the fish over ten inches, then a guy oughta be able to legally keep fish for the frying pan. It's just probably advisable to have an idea what the population density is, because it's certainly easier to overharvest bigger fish, because there's generally fewer of them. Love your photos. Keep 'em coming!

Permalink Reply by PaPa Cheese-O on February 5, 2009 at 9:33am
Beautiful Gills. Those farm ponds can really produce if u take care of them. You have to keep taking some out to keep the sizes consistant. Next time u go to this pond let me know. I can pay for some gas and food. Im having Gills for supper. Dip em in egg n milk, roll em in cracker meal and away we go. Keep us posted and Good Fishin.

"Thanks….sights like this is one of the reasons I love fishing! The adventure side of…"
Thursday

"Thanks Dick, we love to vacation in this area….."
Thursday

"Thanks Dick -Greg and I got into these and Bullheads pretty good in October and November ! Merry…"
Wednesday

"Beauty at its best."
Wednesday

"Another quality piece of work. He never ceases to amaze me."
Wednesday