Lifting and push pannies in the water column

I'd like to talk tonight about lifting fish, specifically crappies and gills. The most common mistake I've been noticing is that enough distance does not get put between the fish and the bait as the lift is being done.
Even I get into the habit of lifting a few feet to trigger that chase and the subsequent strike and for the most part that is all that's needed ,however when the fish do not give chase I believe we as fishers think that the fish are not interested and give up working that fish we are targeting on our sonar.
Last weekend for example I was lifting up to 6 feet away and to my suprize the fish were bolting for my bait.
It's truely amazing how far those fish can see even in stained water.

Sometimes the fish would stop a few feet after the chase begins. They might have lost sight of the bait so a wiggle of the rod tip can help them relocate or reaquire their target.
Sometimes they get to what I'd call the back door and stop without hitting.
It may have been that I went past their ceiling.
Here's is where I want to push that fish.I know that it wanted to feed because it gave chase.So I'll lower my bait real slow,thereby pushing that fish back down.
If I drop too fast the fish may run back to the bottom and in some cases out of the sonar cone.
So by slowely dropping I am allowing that fish to remain in a striking position just below my bait.
The distance I'll push depends on how high the ceiling is. I'm looking typically to push that fish a couple of feet.
Last weekend was also an eye opener on fish hitting on the fall.
I had more fish caught by pushing in one weekend than I did all of last winter I'm thinking.
What causes this type of hit I'll never know ,but a pattern developed and I worked it to the fullest.
My rod has a spring strike indicator on it and it's pretty sensitive.I have it weighted so that there is a slight downward bend. Noticing that the spring would straighten out was a tell tale sign that there was no weight any longer on the end of my line....fish on! Sometimes on the push I'll pause 3 seconds before trying to relift that fish if it did not hit on the fall.
Well by lifting real slowely I'll watch that spring and if it starts to bend too much...fish on!
[img]http://i65.photobucket.com/albums/h209/palisade1kid/MuleFest10early...[/img]
Lifting and pushing fish can be easier with packs of suspended fish.Singles are a bit tougher ,but the game is on with a signal marking on my flasher.

Of coarse color and sizing of the bait needs to be determined. A thinner line also helps due to the lack of line coil. Another thing that helps with thinner line is that the fall is faster in that initial 20 foot or what have you to that target fish.
Most often I'll run a split shot.One that is small so as to not blot out my bait signal.
A sinker should be attached not to tightly as to dent the line and make a weak spot.It should also be far enough away to give the bait ample line allowing a more natural presentation of that bait.
One other bonus sinkers add. They are an attractor to fish.
The small nature of a bb sized split will draw fish into the sonar cone.
In some cases the fish will fly right by my bait to close in on the sinker while preforming a lift.
Talk about good eyesight.

Each and every fish is a brand new ballgame in seeing if you win with your lift and or push.
Have fun working those fish!

Permalink Reply by John Sheehan on December 18, 2009 at 7:35am
Great advice and tips CK!Thanks very much.Should that BB Shot be 8" above bait or closer? What do you suggest? 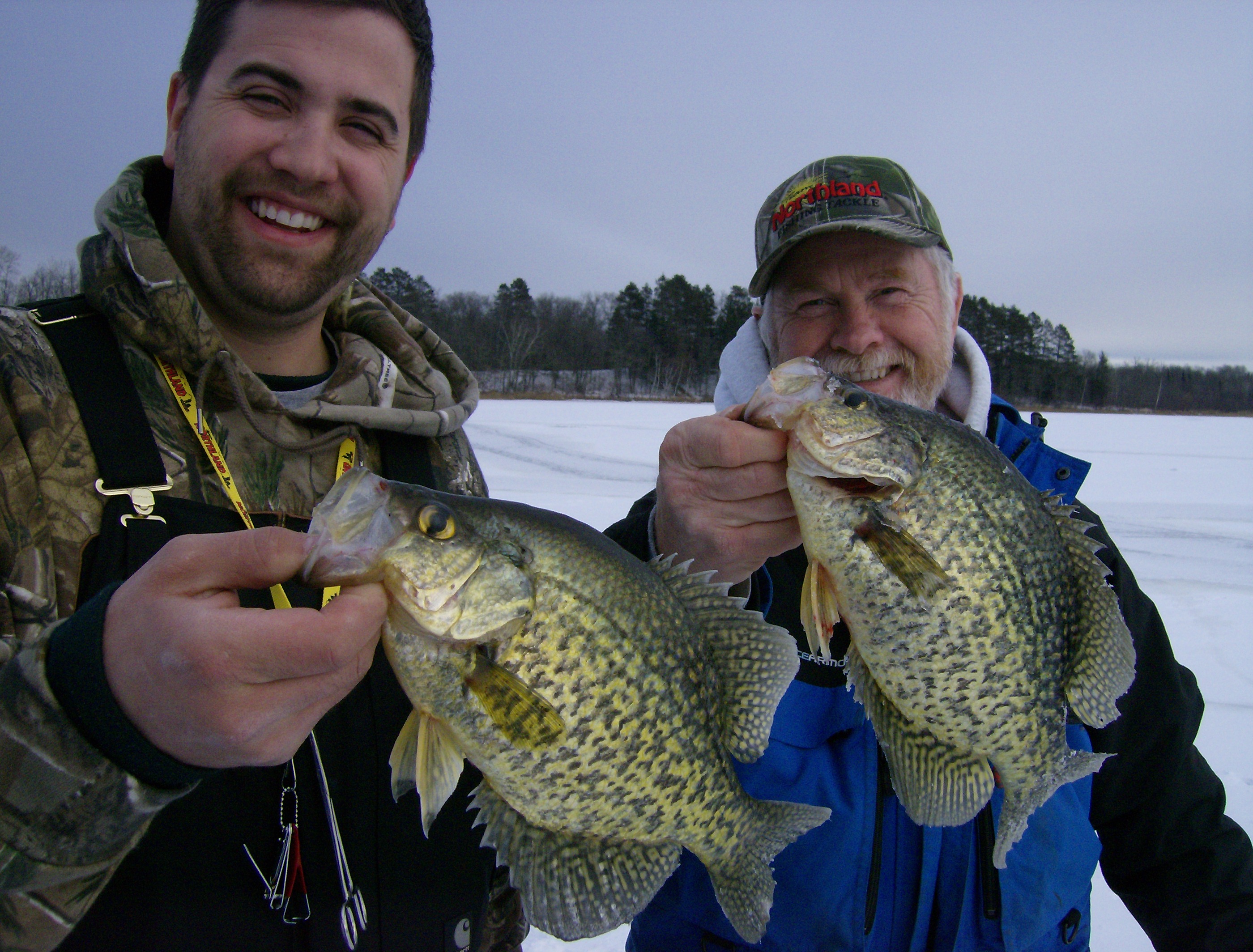 Permalink Reply by Jim Gronaw on December 18, 2009 at 7:07pm
Hey CK, good stuff. My buddy Ron Munshower uses what he calls the 'flutter technique' on Deep Creek Lake yellow perch. With his Rapala Ice Rap just inches off the bottom, he will quickly lift the bait up off the lake floor 3 to 4 ft, then start a slow decend with a series of hops and twitches on the way down. He will pause every 6 inches on the way down and keep a close eye on the wire. Most of his strikes, though, come almost as he is back down to within inches of the lake floor. This is an aggressive jigging tactic and most of the strikes firmly snap the wire down with those big perch...no question about the strike. Boom! Set the hook.

We use 6 pound monos as we are likely to hook much bigger walleye and pike. Strike detection on perch gets a little tougher once we fish 22 ft or deeper, which often happens mid-ice-season.

Thanks for the tips!
Attachments:

Permalink Reply by CrappieKeith on December 18, 2009 at 7:25pm
We get perch this way too.Only the lift in not near as high.

Permalink Reply by Greg McWilliams on December 19, 2009 at 5:21pm
CK, This is great info, and I see ice fishing is more high tech than just dropping a line in an ice hole. You and Jim both talked about wire stike indicator. Could I see a picture on one rigged up? Is this an ice fishing set up or do yall use it on open water /

Permalink Reply by Jim Gronaw on December 19, 2009 at 6:20pm
Hey Greg...This is not the best picture , but it will give you the idea. I make my wire strike indicators out of guitar strings and wrap, then coat them with a sealer, on the tip guide of my short ice fishing rods. I believe they are absolutely essential in detecting light striking winter panfish, especially crappies and picky gills, throughout much of the ice season. The line is threaded through the loop formed at the end of the wire, thus acting as the final 'guide'...a super-sensitive rod-tip.

There are lots of commercially made strike indicators for ice fishermen to attach to their jigging rods. We always thread a orange, red or yellow bead onto the wire loop so we can see its movement easier over a black hole staring down through the ice. If the wire dips, you set the hook, it it pushes upward, you have a strike as well and set the hook.

Hope this helps to explain it all Jim 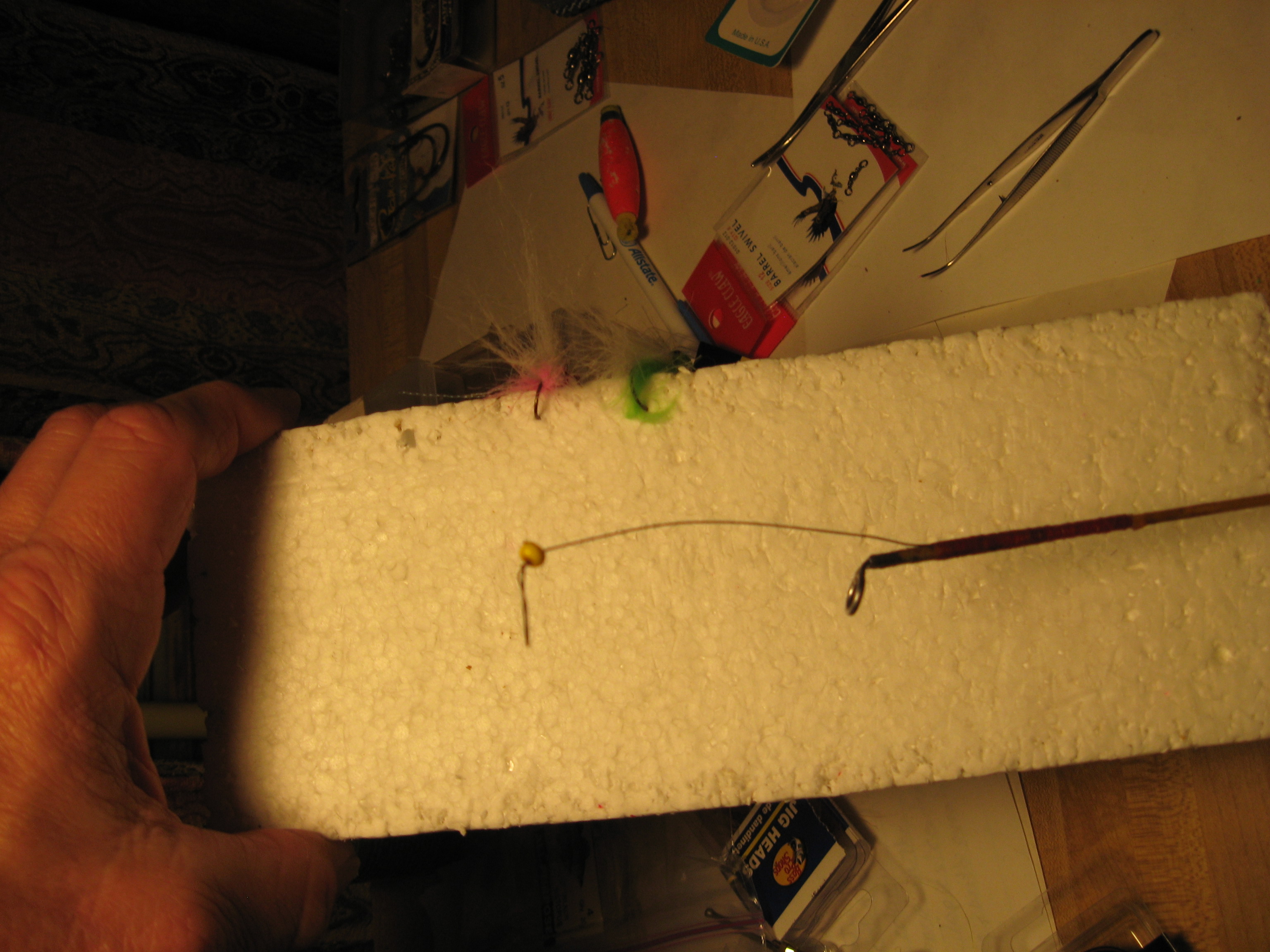 Permalink Reply by John Sheehan on December 19, 2009 at 7:40pm
Jim -This is incredible!I've always wanted to use ends of strings I clip off after changing a set in some resourceful way ...can you use electrical tape to cinch the springy indicater
to the rod end? Seems to me a light gauge B string would do the trick.

Permalink Reply by Greg McWilliams on December 19, 2009 at 8:22pm
Ok Jim, That makes sense, neat trick. Something that could be used on open water, on a calm day or in a float tube. I'm going to have my spinning rod out of storage yet,if I can find it.
Thanks Jim
Greg

Permalink Reply by George Hogoboom on December 21, 2009 at 7:15pm
This sounds like somthing I will give a try.Thank you for the tip.

Permalink Reply by Jim Gronaw on December 21, 2009 at 8:09pm
We have always used rod wrapping thread to secure our wire indicators then gave them a couple of coats of epoxy or some type of durable coating. The electrical tape will probably not work, as the wire will easily slip out of position once the tape gets cold, plus, you can't wrap it tight enough with the tape.

Some of our wires are designed for shallow fishing and some for deeper work. If you are using a 1/5 th oz Swedish Pimple on a real thin gauge wire, then it will likely cause your wire to 'nose dive' in a downward loop and you won't be able to detect strikes. We usually use wires, or guitar strings, from .018 to .030 and about 2 inches in length beyond the tip guide, with at least an inch of wire wrapped onto the rod tip section itself.

We also 're-bend' our wires perhaps hundreds of times as some of them will hold up for years. As a general rule in ice jigging...heavier wire indicators for heavier lures, lighter wires for lighter lures.

I have never used them for open-water efforts as I think most of them would simply 'fold-over' on even the slowest of retrieves.

Permalink Reply by CrappieKeith on December 22, 2009 at 9:34pm
A spring strike indicator is imperative on a finnicky bite.
I had several hits that I never saw but when I went to relift the spring would start to curl....fish on.
An up hit is also something that a spring will reveal.
I've been fishing this way for 20 years even before the flasher was a main piece of equipment. 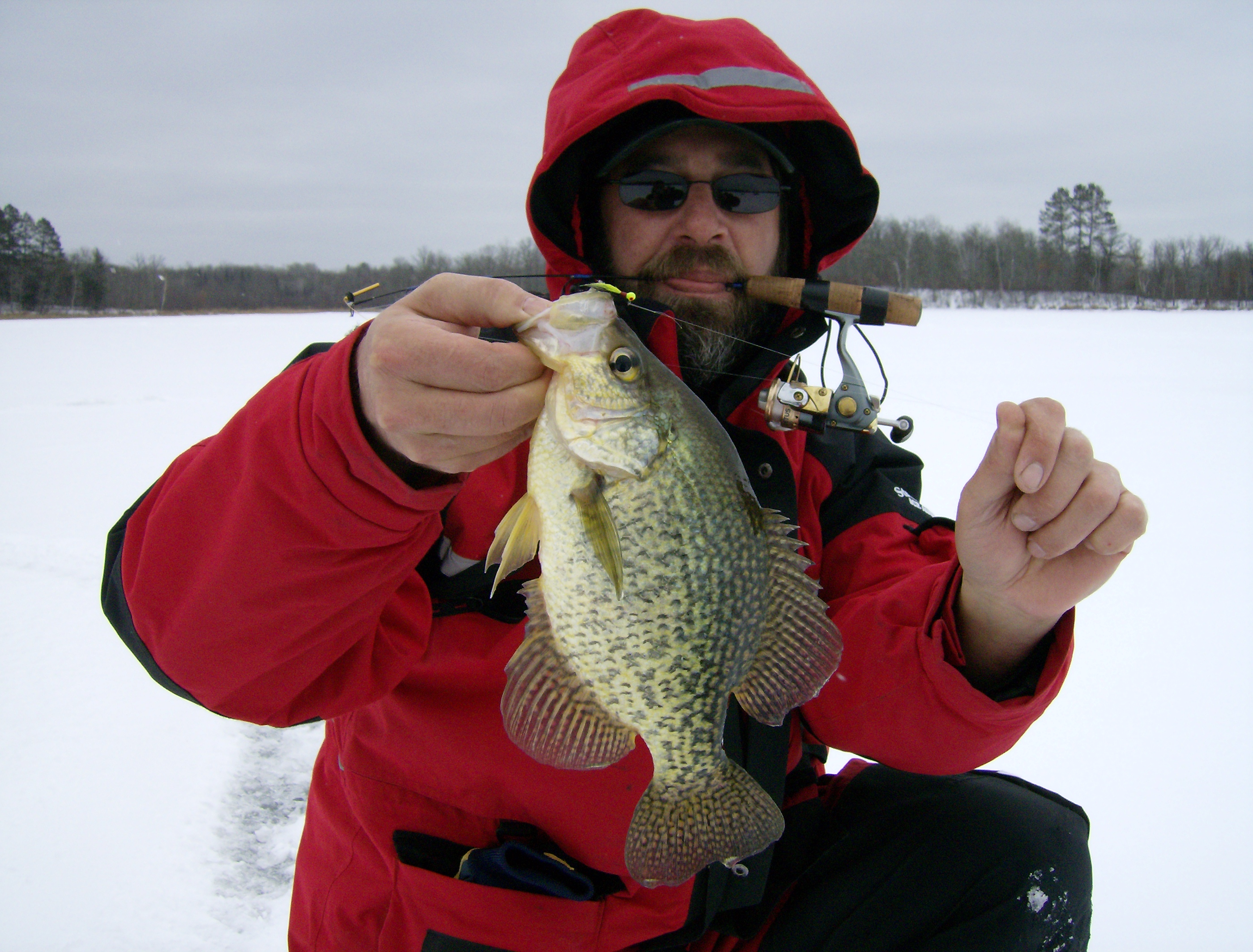 "Like fishing it gets fast and furious at times and they latch on….other times a bit…"
23 hours ago

"I guess that's something you have to become good."
23 hours ago