Superb effort Jim.....thanks for sharing the results, and looking forward to further testing!

Great November fish by the way.....

I gotta say your conclusions are probably right. Too many variables, of course.
But I still like the numbers. Great results on those wicked old Gulp! baits! LOL
Im more impressed with your knowledge of the waters you're fishing. Me, I'm always guessing what's going on down there.

excellent experiment Jim;;   I have tried gulp products;; many- many times;; very little luck with them.  about to give them up!!

thanks to Gulp ... i now have two rigs stowed away in the car for just in case fishing ... oh and a jar of maggots also.

Permalink Reply by David, aka, "McScruff" on November 5, 2014 at 8:01pm
This is what I had always hoped for Gulp! - a ready bait, no fuss.
I've never had much success with them, which I attribute as much to my choice of spots as anything.

This is how it all started for me David just over 2- 1/2 years ago….. my wife and some good friends were planning an afternoon of fishing with the kids. I was to take the older boy and my son out in the boat while the women stayed behind and fished off the public docks with the younger kids, they said “NO WORMS” So on the way down I asked the guy behind Jays Sporting Goods counter what he suggested was wax worms then …. I replied nothing live or bloody. He disappeared for a second and came back with the gulp crème colored maggots.
At the docks I rigged the kids up with ice fishing rods and Spiderman outfits and gulp maggots and bobbers. I took a few practice casts and immediately started hooking 5 to 6 inchers. The women agreed everything was fine and us guys took off. Every few minutes we would here squealing and laughing from the docks. The kids were having a blast catching fish and the women were baiting the hooks! My first success story with gulp.

Fished a new pond today, a whole 1.1 miles from the house, and did some more experimenting. Here's the short version...

Caught a few nice gills and bass on untipped Sonnys Super Minnow, just to give it a test drive, more to come on that.

-Used garden worms vs. Gulp! as a tipping bait for 1/64th oz jigs and the worms took 26 gills to just 1 for the Gulp! tipped jigs. Fished the same areas, and one angler, my bro-in-law, Paul, used the Gulp! earthworms with little success. He switched to the worms and caught a half dozen.

-Most of the fish I caught were in a small corner that had some dying, yet some still green and emerging, weeds that topped out at about 3 feet from the bottom in six feet of water, I set the bobber at 3.5 feet and had the most success there, even though most casts required a little weed removal from the jig. The fish seemed to be feeding at or near the tops of the remnant weeds.

-Bluegills ran from 8 to 9.5 and most all were males. Bass were stunted and thin...standard issue for quality bluegill ponds. This remote pond gets very little fishing activity. Water about 56...would like to fish it in late May for some pre-spawn bluegill action.

So...again, no real conclusions except that the fish just wanted the real McCoy today. Well see what Saturday brings. Paul with his best gill of the day. 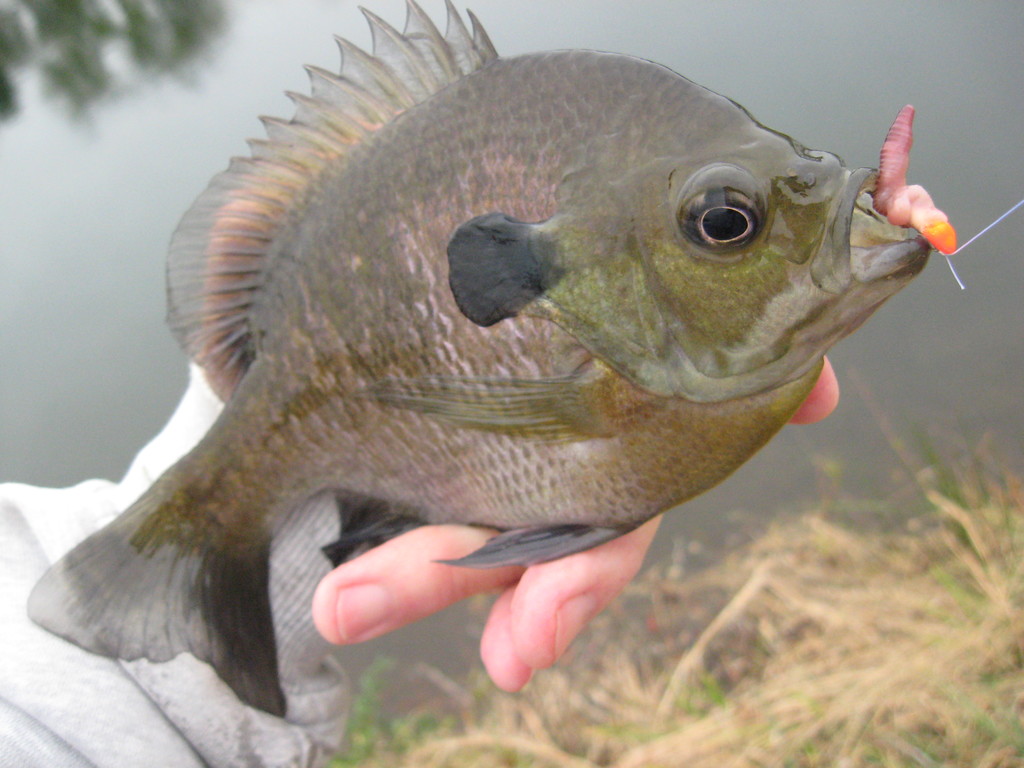 Most fish took the shad dart jig with a sizable worm chunk. They seemed to like the worm squirming.

I've experienced Gulp! minnows outfishing live bait several times with gills and also crappie. The 1" are great for gills whole. I never cut them down to a smaller size. However, I'm not a huge fan of the other gulp baits...they catch fish but they're not anything special in my eyes.....

Permalink Reply by Slip Sinker on November 6, 2014 at 7:55am
Jim were the gills loosely or tightly schooled

Ken...since this is just a small 2 acre pond I am assuming that the fish were pretty tightly schooled in specific locations due to forage availability and weed growth. We caught a few elsewhere, but the Hot Corner photo I posted produced 75% of the gills...that's where the weeds were.