Back when I was a kid, I traveled a bit during summer vacations to mainly the upper midwest, from Wisconsin to Washington and many of the states in between. That was where I first saw anyone fly fishing. When I got back to Nebraksa I looked around and realized that there just wasn't much availble for anyone to get into fly fishing in the area, this was all before the internet, big sporting good stores, before the Mothership landed close to home (I've got a Cabela's 10 minutes from my house now!).

Over the years I grew into the impression that fly fishing was strictly a way to fish those clear moutain streams I'd encountered during my travels, even to the point were I thought fly fisherman were L.L. Bean shopping "snobs". That opinion changed last year when I joined an organization that some of you on here are familiar with, the Nebraska Fish and Game Association. On that paticular fishing forum I met a great guy by the name of OldBaldGuy, becasue of him and several others, I got interested in, and bought a float tube and met up with Roger one day to fish for catfish. I knew he was a fly fisherman, but didn't expect him to go fish for cats with a fly rod. Sure enough he did, and caught a bigger catfish than me. I was amazed to say the least.

I met up with many members of the NEFGA including OBG many times last summer and this season as well, mostly to fish out of float tubes for what ever was biting, but gills were always a primary target for most of us, big gills always being on my mind casting with my ultra lite and micro jigs while I drifted with my cat rod for big cats.

About three weeks ago, I met up with a buddy for a multi purpose trip. One was to catch bait for fishing trip the next day, Two was to catch frogs for some good eats! While fishing for bait, he asked to see my ultra lite and handed me his fly rod. And then he wouldn't give it back! He gave me a few quick pointers on how to cast and I was off.

A few days after that adventure, the same guy gave me an old 3 wt and reel. The very next day, as I was stripping line off the reel so I could switch over for left hand, my 8 month old beagle pup decided the pile of line at my feet was a toy, grabbed it and took off, snapping the top of the rod like a twig. I explained what happened to another good friend who promptly gave me a brand new 2 piece 6 wt and old reel.

Back in action, I met with OBG for some casting lessons, caught a few small gills while at it. Over the last two weeks or so, I've been able to get the fly rod out a few times and have had some fun, and some frustration. Learned some new knots, found myself wandering into the fly fishing section at Cabelas and praying for not so windy days.

I'm not giving up my standard tackle by any means. It's pretty hard to cast big live bait for flatheads, or big chunks of cut bait for channels and blues with a fly rod. But for gills, I pretty sure the fly rod will be the way to go, although there is something to be said for sitting back in a chair and drowning worms under a bobber with my wife and three girls.

Well, that's how I became a fly fisherman, thanks for reading the overly long post, thanks to the good friends who've helped me expand my methods of fishing and thanks Bruce for an outstanding site!

My biggest gill to date on the fly rod.... Note the parasites this one has 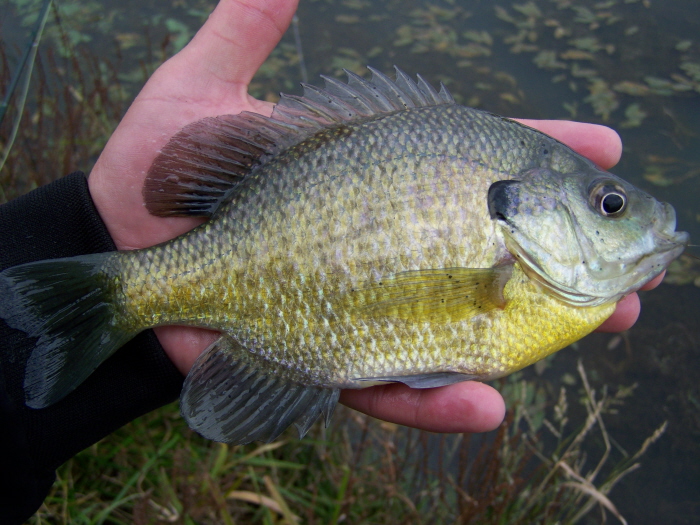 Comment by OldBaldGuy on December 15, 2008 at 7:03pm
"Second...there can be 2 distinctly different groups of bluegills in a given body of water..."
I've noticed that to be true. There's the group that will bite and then there's all the others. LOL 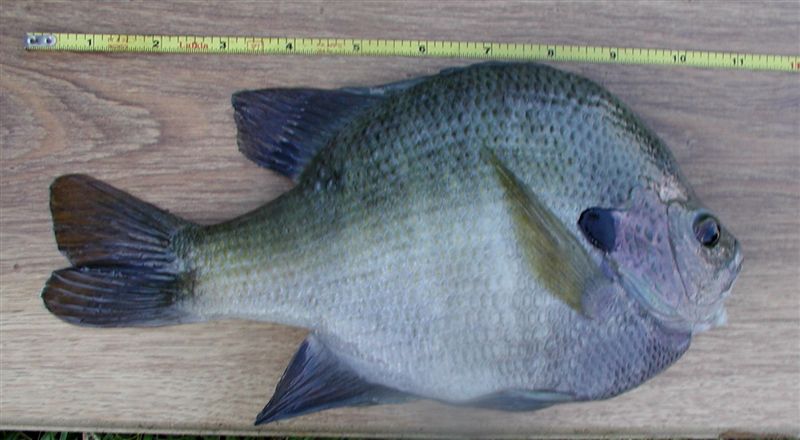 Don’t apologize for “HORRIBLE” time trying to cast a sinking line…..
You don’t cast a sinking line – a roll cast or simple “flip cast to get the head out of the fly rod guides, water haul and let ‘er rip – I cal it launching rather than casting.
It’ll go a mile.

Ill give a shot to answering your questions with the disclaimer that I am a novice when it comes to BG fishing – Bruce got me interested a few years ago and got me “hooked”.

1. For 15'-25' depths would you recommend a full-sinking line? How fast of a sink rate? Favorite brand that works better than others?
First of all, I don’t use a full sinking line for BG or RES – only for striped bass in deep water patterns, and only on shooting heads. 28 ft of Cortland LC – 13 (Lead Core 13 gr/ft.) at a fall rate of about 1ft/second.
It’s inexpensive - I am a “cheapskate” with running lines and I DIY from old fly lines or “low memory” mono ~25# test or section.

3. What size/pattern/color of floating fly works best for you in this situation?
I keep it simple – a small gurgler of foam wiggly legged spider works for me.
You can get fancy and tie foam bodied wooly bugger with marabou tail and palmered hackle – any foam fly that will float off the bottom with a sinking on sink tip line.


4. Any major issues with snagging up on brushpiles, weeds, or rocks?
A sink tip or versa tip in much more unlikely to hang up in rocks or brush piles than a full sinking head.

Full sinking lines and sink-tip lines are pricey and I like to make stuff anyway, but sinking shooting heads are available at may sink rates.

Comment by David Merical on October 21, 2008 at 7:26am
George, you are right about flyfishing being versatile. I really do enjoy flyfishing. Way more than I ever expected to! It really is only my own perception that it gets more difficult when I start using sinking lines. I used a sinking fly line when fishing for white bass on a local reservior from my kayak a month or so back. It worked ok for drifting/trolling. It works much like using leadcore line, which I've used when trolling for walleyes. I admit I don't enjoy trolling, I would much rather cast or vertical jig. Anyway, I had a HORRIBLE time trying to cast that sinking line. I obviously need to practice that more!

Since you've had a lot more experience with sinking lines, I hope you don't mind if I pick your brain and learn from you? I'm very open to experimenting more with sinking fly lines. A few questions that come to mind immediately are:
1. For 15'-25' depths would you recommend a full-sinking line? How fast of a sink rate? Favorite brand that works better than others?

2. Do you cast & retrieve these sinking lines, or let it out and drift/troll with it?

3. What size/pattern/color of floating fly works best for you in this situation?

4. Any major issues with snagging up on brushpiles, weeds, or rocks?

Thanks George! Oh, and forgive me for hijacking this thread in several different directions...

Comment by george on October 20, 2008 at 4:41pm
Re: Comment by David Merical 9 hours ago
David, congratulations on your venture into the realm of flyfishing.
In spite of your perception of the limitations of flyfsihing, as you develop your skill and knwledge, you will also discover the versatility of the sport.
There are endless techniques and tackle to approach different presenations, flies, and fly lines for depth control.
One of my favorites is a sinking, or sink tip fly line, with a foam "bug" that will float off the bottom.
You will find that you can keep a fly in the "strike zone" longer with a fly than with a lure or lead head jig, especially for bottom dwellers like RedEar Sunfish as well as Blue Gill and LargeMouth Bass at times.
Keep up the good work.
George Glazener

Second...there can be 2 distinctly different groups of bluegills in a given body of water (based on habitat preference, or prey selection), and other than breeding season when all are generally in shallow waters, and the two often don't mix.

Comment by David Merical on October 20, 2008 at 2:46pm
Me too, Zig. Usually those "infected" bluegills were taken from waters that had a LOT of aquatic vegetation...which is perfect habitat for snails.

Abstract
In some lakes, bluegill sunfish (Lepomis macrochirus, family Centrarchidae) captured from the open water and littoral zone are morphologically and behaviorally specialized for foraging in their respective habitats. Here, we examine the degree to which individuals move between habitats of a single lake by using parasites as an indicator of long-term habitat use. Fish captured from the open water and littoral zone of Holcomb Lake, Michigan, were morphologically different, confirming the results of an earlier study. Twelve parasite species infected bluegill from the littoral zone whereas seven species infected fish from the open water. Two digenetic trematode species (Neascus sp. and Posthodiplostomum minimum) that utilize snails as intermediate hosts were over five times more abundant in littoral-zone fish than in open-water fish, whereas one cestode species (Proteocephalus ambloplitis) that utilizes copepods as intermediate hosts was almost twice as abundant in open-water fish than in littoral-zone fish. Within habitats, there was no relationship between morphology and parasite abundance. Our results suggest that most fish (including those with intermediate morphology) commit themselves to one habitat or the other and that open-water specialists seldom visit the littoral zone. "

Comment by Zig on October 20, 2008 at 1:45pm
Alex - I find your response to floats interesting.
I tend to look at float design first for suspension reasons, second for strike indication. A float doesn't necessarily have to be submerged to indicate a strike. (I'd miss 90% of panfish strikes I experience if waiting for the float to go under).

Dave - that's my understanding. However, I see it much more often in smaller waterways then I do the lakes and reservoirs.

Hopefully Bruce or Daryl will chime in regarding the snails/parasite question.

About those parasites...is it true that these are common on bluegills in bodies of water where the fish are dining heavily on snails?

"Thanks John….I’m going to try to find some and give it a whirl…..catfish are…"
46 minutes ago

"I use crawler pieces on the floating Jig'-heads for Perch and Bullheads. Work…"
3 hours ago